Kate Bosworth on the delights of playing the villain: "We wanted to turn it so the Hitchcock blonde would be the psycho rather than the victim" 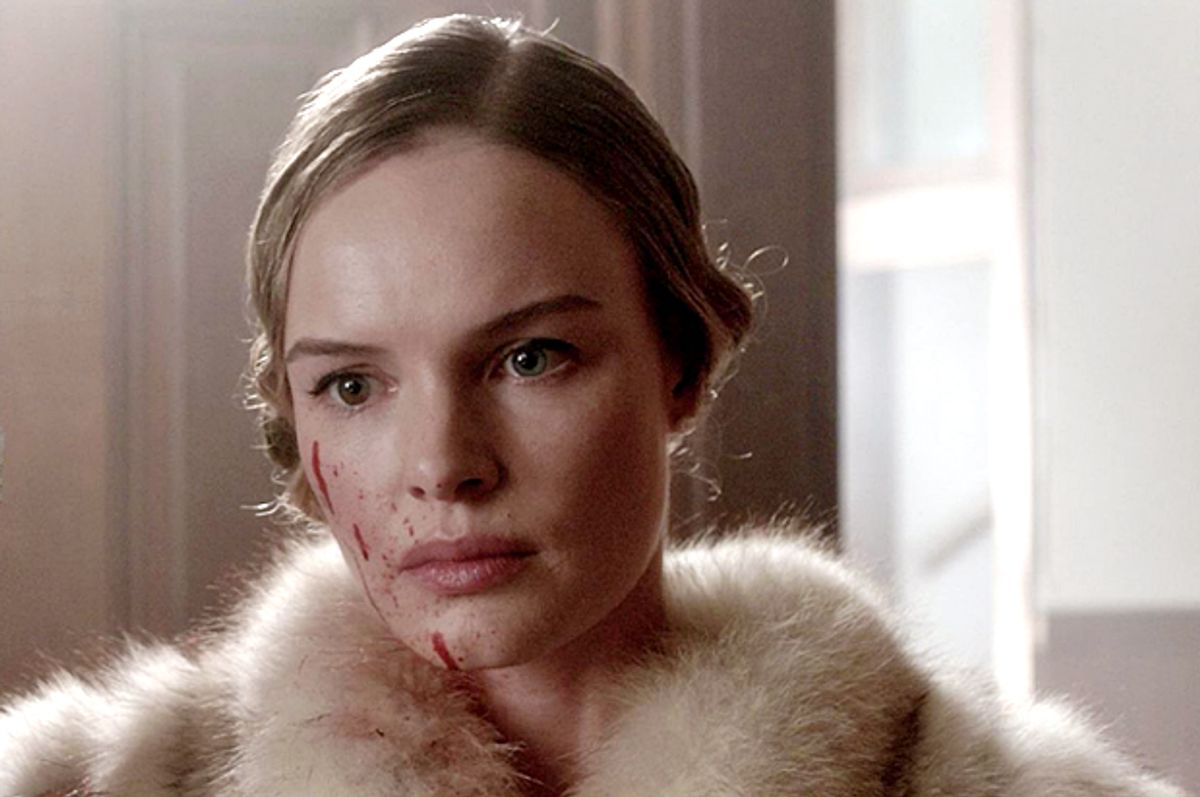 “Amnesiac” is actress Kate Bosworth’s second film (after “Big Sur”) with her husband, director Michael Polish. (Their third film together, “90 Minutes in Heaven” opens September 11). Here, the actress plays an unnamed woman who may—or may not—be the wife of a man (Wes Bentley) who suffered a head injury in a car accident. This slow-burn thriller takes a while to reveal what exactly it is up to, but once it does, viewers will be transfixed. Bosworth gives a masterfully controlled performance. She is equally adept at providing comfort by feeding and bathing her injured husband, but also being spattered with blood while wearing a stylish fur coat, or wielding a blunt instrument to protect herself. To disclose more would ruin the twisted and at times darkly funny “Amnesiac” (which opens in theaters and on VOD and iTunes today.) Suffice it to say viewers will be rooting for her character despite her questionable behavior.

Bosworth shows her versatility in the film, playing in the horror genre. It is a far cry from her breakout turn as a surfer girl in “Blue Crush,” her iconic role of Lois Lane in “Superman Returns,” or her fantastic, little-seen performance as an adulterer in the indie film “And While We Were Here.”

Bosworth spoke with Salon about her roles, her marriage and making “Amnesiac.”

"Amnesiac" features as many bloody moments and there are uncomfortable ones. How did you steel yourself to make a horror film?

Obviously, when you are dealing with this genre, the pitfall could be to make a straightforward slasher film, a surface type movie. I was sent the script, and I thought it would be really neat if Michael directed it because he’s so visually driven and had ideas for the genre. I was attracted to the character for numerous reasons, but I was interested to see how he’d translate the project from script to screen. He thought it would be neat to create a world of her own, with a timeless quality to it. She’s so desperate for the structure and stability of the 1950s. That added different layers for me and for the character. That made it an intriguing project—more psychological thriller than a thriller in a slasher sense.

There is some wonderful trivia your character spouts about chicken noodle soup, batteries, can openers, bottle caps and other things. How did you feel these facts informed your character?

I saw her spinning this web, with this absurd language. She is a compulsive control freak. She’s clearly out of control, and these are the tics she has in an OCD way that make her feel in control. The fact spewing in the script—the chicken noodle soup line—we wanted to expand on that. Those facts came about when they felt instinctively right, like when she was electrocuting Wes, or playing Conway Twitty on the record player, and she says he had more hits than Elvis. We played up those facts.

She could have very easily veered into camp. How did you control that?

I think we were inspired more by Hitchcock femme fatales. Michael was inspired by Polanski. We looked more at their films. The female is the victim in them, so we wanted to turn it so the Hitchcock blonde would be the psycho rather than the victim.

Your character’s poker face and emotionless voice, her severe mannerisms—how she folds the bag at the pharmacy—and her incredible fashion sense are very deliberate. Can you discuss working on those facets of the role?

One of the first aspects of the characters I wanted to specify was her voice. In the beginning I wanted her voice to be medicinal, like a morphine drip—soothing, kind, like a lullaby. Then, as the film progresses, that becomes less so, her voice is more irritating, and aggressive… Because Mike wanted her world to translate to the timeless 1950s, we wanted her fashion to be high end, and stylish. I called on a hair and make up team and referenced everything from Hitchcock to a Prada campaign so it was specific and stylized.

I found myself rooting for your character. Why do you think that is?

I don’t know. I think there’s a part of us who — we aren’t going to do these horrific things, but there is something humorous and delicious about a villain. It’s entertaining. You want to see where they go next…

Yes! If she gets caught you enjoy the movie less! So, are you a good patient, or a better caregiver? There are difficulties and stresses in both roles.

I am not a patient patient. I’m just not patient with the process of feeling unwell but I do like caring for people. I’m a far better caregiver.

Was it more fun to bathe Wes’ character or give him shock treatment?

Shock treatment for sure! That scene was so crazy! Clearly there are things that go down in the film—electrifying him, buckets of blood—every time we cut, we broke down laughing. Anything we had to do that was physical, we had lots of laughs.

Can you describe any experiences you had with coping with trauma, like the characters in the film?

I’ve had nothing as traumatic as the car accident in the film. I try to observe myself carefully as much as I can. I think ever since I was a little girl, I was very clear on who I was, and who I am, and I’ve never swayed from that. I know how I wanted to be treated and how I wanted to treat others. It comes down to the simplicity of life that way. If I can live in that sense I feel clearest.

Can you describe working with you husband, and how you collaborate?

We met on “Big Sur” and he’s been my favorite director to work with, so it’s a relationship that works in every sense of the word. He knows my strengths, when to push me, and how to communicate. He’s an actor’s director, whether it’s me or someone else. He has a special way of communicating and coaching actors. As an actor on set, you’re there for a limited time and often come prepared, but you might have to adjust, and with Mike, I know what he’s thinking. That’s comforting and gives me confidence as well.

Is working with him a priority? What decisions go into how you pick your roles?

I just go where the opportunities present themselves, and when I can stand behind the work. The scope of the project doesn’t matter. Making “And While We Were Here,” I did my own hair and make up. It’s finding the character you want to explore and feeling compelled by the words, and the director. A few of those things come together and that appeals to me.

Your character has a film room, among other hobbies. What can you say about your hobbies?

We have property in Montana we like to escape to. There is no Internet, no cell reception. We live on a lake, and fish, cook, drink whiskey, play pinball, or the jukebox. That’s my escape. It makes you feel like nothing else exists.