Scott Walker's in big trouble: The danger of peaking in Iowa too early 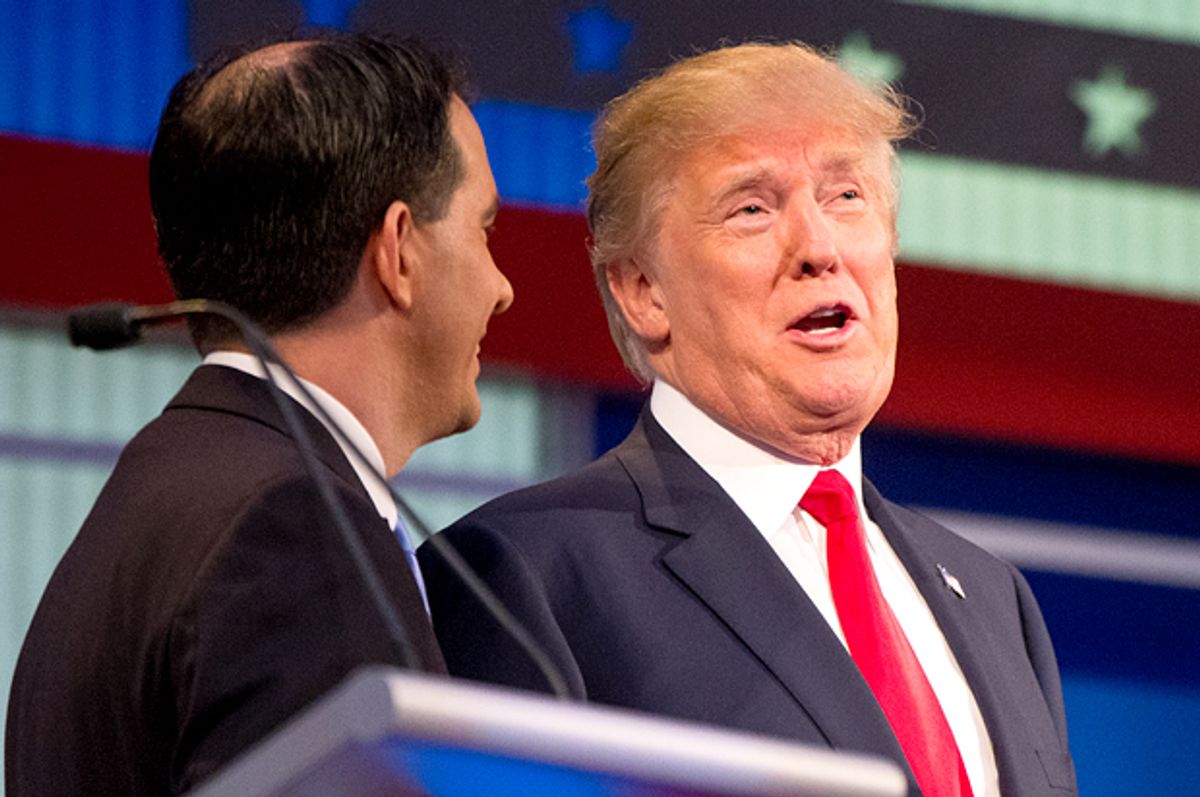 And just like that, Wisconsin Gov. Scott Walker is screwed.

For about six months, Walker had been enjoying a comfortable, 5-10 percentage point early lead in Iowa caucus polls, spurred on by what some would call an "energetic" performance at this winter's Iowa Freedom Summit. ("Energetic" in quotes because Scott Walker's attempt to pitch himself as real, live, charismatic human being, instead of a decaying plank of wood, has been comical. Instead of showing human-like charisma, he speaks very loudly in his same, death-like monotone. It works for some people. Weirdos.)

Maintaining such a healthy lead in the first caucus state has its pros and cons.

It makes you the envy of the field, obviously, or at least that segment of the field that's centered its early strategy on winning Iowa. Candidates like Mike Huckabee, Rick Santorum, Rand Paul, Ted Cruz, Rick Perry, Bobby Jindal and whoever else have been tricking out whatever stunts they could to gain more traction in Iowa, and in no way have they been able to get close the Walker.

But doing so well in Iowa for such an extended time this early in the process sets expectations. Such as: Scott Walker needs to win Iowa. And once that expectation is set, Walker has little choice but to run an Iowa-centric campaign pitched to evangelical voters, the sort of campaign that might not play as well in the long-term and could have damaging general election effects were he to win the nomination.

And now, almost overnight Scott Walker is out of first place in Iowa.

The three most recent surveys of Iowa Republicans, each taken after last week's debate, show our main man, Don Trump, racing ahead of Walker and the rest of the field by approximately the same, comfortable margin that Walker held for most of the year. Worse yet, the most recent of this polls, from CNN/ORC, shows Walker falling into third place, behind Trump and Ben Carson, with a modest 9 percent support. A Suffolk poll, meanwhile, shows that only 5 percent of likely caucus-goers said Walker most impressed them during the debate -- compared to 22 percent for Carson and 11 percent for Trump. (Twenty-three percent said Rubio was the most impressive. So there's another candidate poised for a jump, and another problem for Scott Walker. Yeesh.)

But! you say. Very few of these "likely caucus-goers" will bother to caucus on February 1. Only a single-digit percentage of Iowa's registered caucus-goers show up, because caucusing is more of a pain than simply showing up to a poll and pressing some button. That's why so much of Iowa is hinged on winning over activists and setting up a strong ground-game operation. There's no way that Trump's campaign, so focused on making national news headlines, is putting any effort into developing a serious Iowa ground-game, is there?

Oh yes, there is. The Washington Post reports on Trump's Iowa operation, one so impressive that a Rick Perry adviser can't help but go on the record to gush about it.

For many Americans, the Trump presidential campaign amounts to a billionaire talking endlessly, and entertainingly, on television. But here in Iowa, it’s another story. Trump is trying to beat the politicians on their turf, building one of the most extensive organizations in the Republican field.

The groundwork laid by Trump’s sizable Iowa staff, with 10 paid operatives and growing, is the clearest sign yet that the unconventional candidate is looking beyond his summer media surge and attempting to win February’s first-in-the-nation caucuses.

This is becoming a cause of concern for rival campaigns.

“I see them as a major threat to all the other campaigns because of the aggressiveness of their ground game,” said Sam Clovis, an Iowa conservative who leads former Texas governor Rick Perry’s campaign.

“You cannot swing a dead cat in Iowa and not hit a Trump person,” Clovis continued. “It’s unlike anything I’ve ever seen. . . . Every event we go to — theBoone County Eisenhower Social, the Black Hawk County Lincoln ­Dinner, the boots-and-barbecue down in Denison — the Trump people are everywhere with literature and T-shirts and signing people up.

The fate of Scott Walker's campaign, like everyone else's campaign, rests on the hope that Trump will collapse as time condenses ahead of voting season. The only problem is that that collapse hasn't happened yet. Will it ever, so that Scott Walker can rightly reclaim his Iowa throne? Maybe he should speak even louder.