The 9 tips that can save your marriage 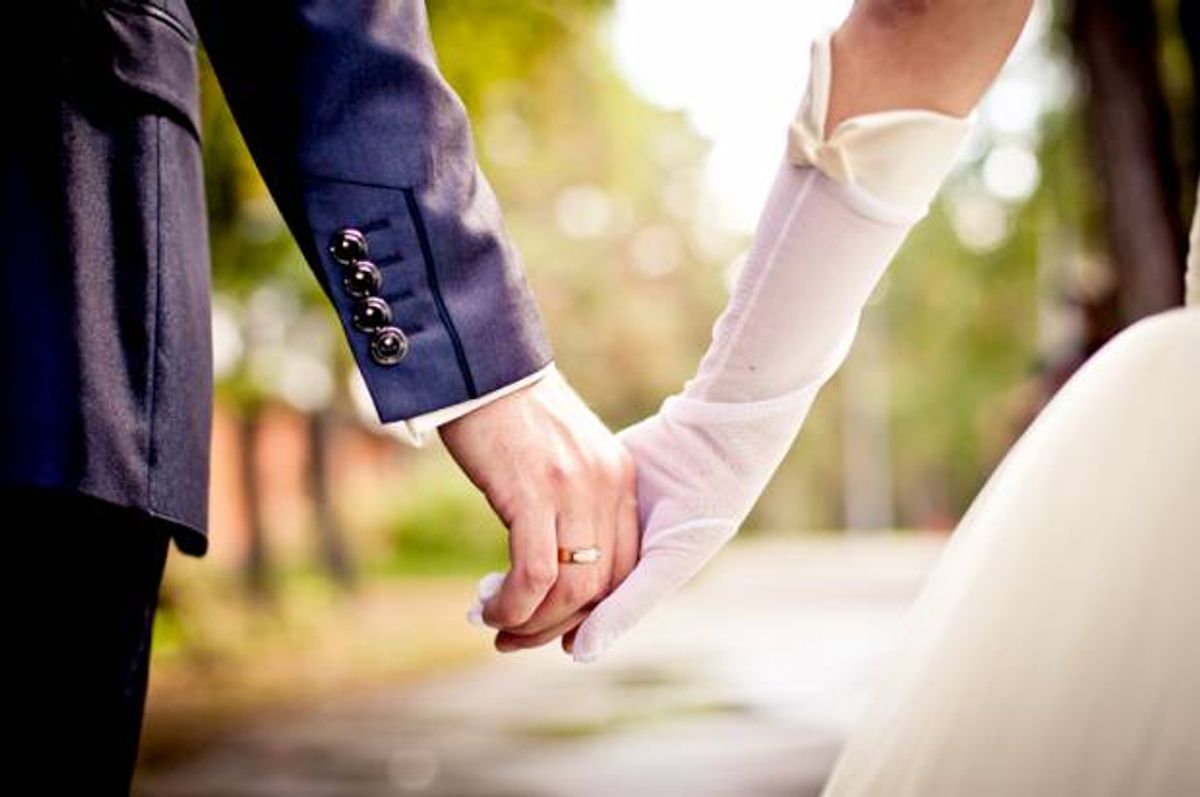 Next to my desk there is a fallen pile of relationship-advice books. It looks like a miniature city of ruins, a very pink Parthenon. I can't even begin to fathom picking up all the rubble -- mostly because I'm not sure if there's anything worth saving in there. It's a shame. The sheer volume tells you just how much demand there is for advice on sustaining relationships.

Ahead of my approaching nuptials I've been wondering about our collective wisdom on marriage and how to find advice that escapes the usual traps of cliche, triviality and overgeneralization. (Not to mention Pepto-Bismol book covers.) Something smarter than, "Never go to bed angry." Something that doesn't read like the latest diet fad. Maybe even something that has, I don't know, any evidence or research behind it? I decided to go to the people I trust most on the topic -- from respected sex researchers to ... my grandma. The result? A messy collection of marriage tips that you will only find here.

For nearly three decades, relationship expert Terri Orbuch has conducted a research project following 373 married couples. She's found that couples who regularly give each other "affective affirmation" -- meaning "compliments, help and support, encouragement and subtle nonsexual rewards, such as hand holding" -- are the happiest. Orbuch, host of the upcoming public television special, "Secrets From The Love Doctor," says a key finding is that "men crave affective affirmation more than women, because women typically get it from people other than their husbands."

Forget about the dirty dishes

Orbuch has found that the happy couples in her study "talked to each other frequently -- not about their relationship, but about other things." Orbuch recommends setting aside ten minutes every day to talk about "anything other than work, family, the household or the relationship." Pretend the cable bill has already been paid, the inlaws already called -- just for ten minutes. "Ask her what her favorite movie is, and why," she suggests. "Ask him to recall a happy memory from childhood. Ask her what she'd like to be remembered for." This small change "infuses relationships with new life," she says.

Stay on your toes

"In my study, when couples said they were in a relationship rut or felt bored, they were less happy over time," says Orbuch. So escape the rut by mixing things up. "The changes can be small, but they have to upset the routine enough to make him or her sit up and take notice."

Similarly, anthropologist Helen Fisher suggests that couples "keep doing novel things together," she says. "Novelty drives up the dopamine system in the brain and can help to sustain feelings of romantic love."

Helen Fisher, author of "Why Him? Why Her?: How to Find and Keep Lasting Love," recommends sustaining "your 'positive illusions'" about your significant other. "When you begin to feel irritated at your partner, instead of reviewing everything you don't like, turn your thoughts to all the good things about him or her."

Psychologist Harriet Lerner agrees. "Newlyweds automatically know how to speak to the positive and make each other feel special and valued," says Lerner, author of "Marriage Rules, A Manual for the Married and the Coupled Up." "But the more enduring the marriage, the more you'll find yourself noticing and speaking to what you don't like." Lerner offers this maxim: "No one can survive in a marriage, at least not happily, if they feel more judged than admired."

Relatedly, Stephanie Coontz, author of "Marriage, a History," says that "relationships, like the economy, run on credit." By that she means both "giving credit, or expressing gratitude, for the things your partner does that make your life easier, things we often take for granted" and "advancing credit by assuming that your partner has good intentions and would like to step up to the plate, rather than assuming that you need to ride herd on him or her in order to get what you need."

Look for the soft emotion

"One of my favorite pieces of advice come from an observation I once heard from two fellow Council on Contemporary Families board members, psychologist Philip and Carolyn Cowan," Coontz tells me. "They said to always look for the soft emotion that lies beneath the hard one." She explains, "Since then I've tried to respond to the soft emotion -- the fear, anxiety or embarrassment that is hiding behind the anger or accusation -- rather than to the hard one. It helps in all sorts of relationships, not just marriage."

Live your own damn life

Lerner emphasizes the importance of independence. "Connect with friends and family, pursue your own interests and be of service to others," she says. "If your primary energy isn’t directed to living your own life as well as possible, you’ll be over-focused on your partner in a worried or critical way."

Don't wait for the mood to strike

"Have sex regularly, even if you don't feel like it," advises Fisher. Now, this does not mean: Have sex with a person who doesn't want to have sex with you. Nor does it mean: Tell your partner that it doesn't matter that they aren't in the mood. Instead, it means: Don't always expect to be overcome by desire before deciding to have sex.

"Sexual stimulation of the genitals stimulates the dopamine system to sustain feelings of romantic love," she says. "And with orgasm, one gets a flood of oxytocin and vasopressin, neurochemicals that give you feelings of attachment for your partner." That's not to mention that "seminal fluid is a good antidepressant, full of chemicals that lift optimism." (Which reminds me of that Liz Phair song.)

But first, pick a good lover

As my grandma once told my aunt, "The best I can wish for you is a lover as good, as well as kind and considerate, as your grandfather." (Oversharing runs in the family.) This bit of advice is only useful pre-vows -- and it's important to note that a good lover is not necessarily someone who has the entire Kama Sutra memorized, but someone who brings the right attitude to sex ("good, giving and game," as Dan Savage puts it).

Let go of the fantasy

For his book "You Can Be Right (or You Can Be Married): Looking for Love in the Age of Divorce," Dana Adam Shapiro traveled across the country asking divorcées for marriage advice. After all, who better to offer insight into why relationships fail? "There were so many little tidbits, like how to fight fairly and productively," he says, but his favorite piece of advice came from an interviewee who went by the pseudonym "Jim." He said:

There is something absolutely divine -- I mean, literally, the breath of God -- in the ability to put someone else in your heart, to think of them first. But from the time of the greatest pornographer who ever lived, Shakespeare, we’ve demanded that love be something more. ... And what happens is, the utter grandeur and magnificence of what love actually is gets overshadowed by this disappointment that it’s not the way we fantasized it should be.

Jim, who is now 55 and happily married to his third wife, added, "The very best you can hope for is that you’ve got somebody who’s gonna respect you enough to go through the day-to-day bullshit and be honest with you," he said. "That’s the most romantic thing in the world.”