The Hillary Clinton double standard in a nutshell: Why aren't we talking about Jeb's email scandal too?

The Democratic frontrunner has a target on her back, everyone knows this. But it's even worse than you think 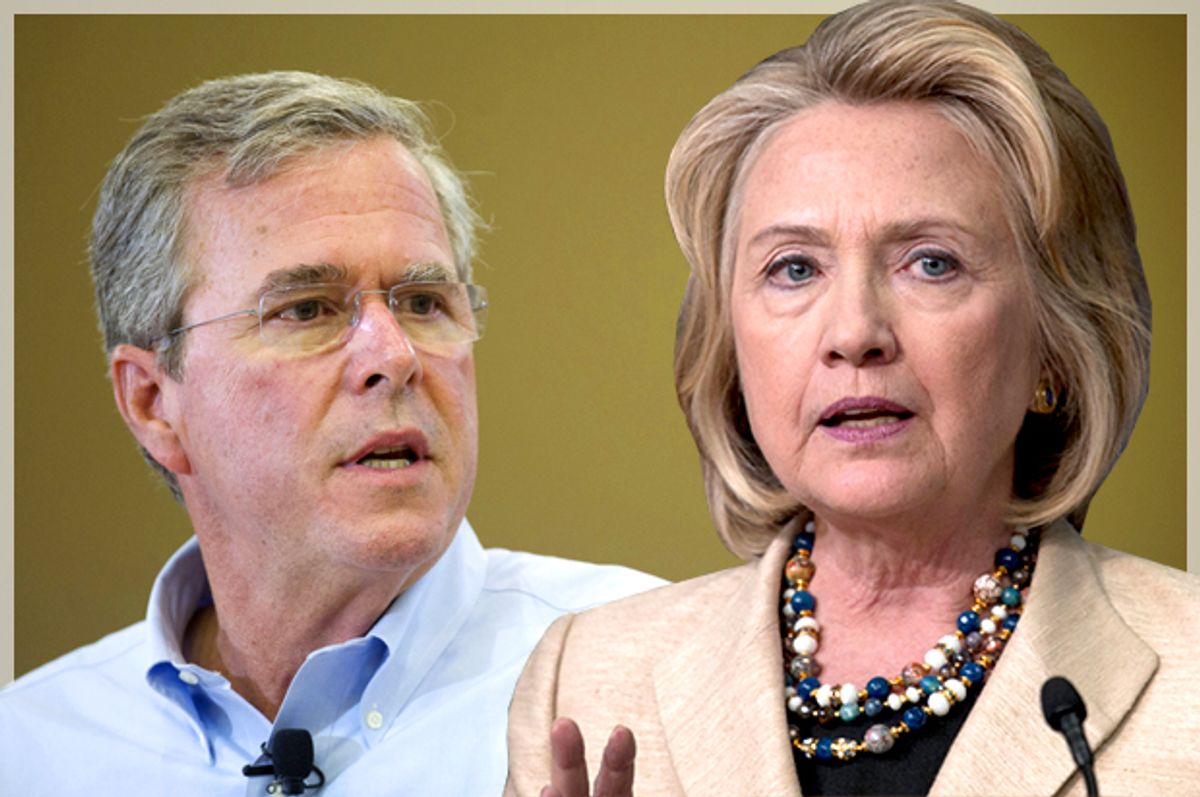 Earlier this week the inspector general for the intelligence community announced that Hillary Clinton's private "homebrew" email server allegedly contained at least two emails featuring top secret information, though they weren’t necessarily marked as such. If true, this of course would represent a harrowing gap in the flow of highly classified information -- a gap which could be exploited by any number of bad actors as the documents passed through the digital pipeline between Clinton and several of her top aides whose emails are also being scrutinized by government investigators. That said, since the content of the email is publicly unknown, there's no way of knowing how potentially revealing or damaging the classified information was. Clinton, meanwhile, had previously denied that she used her private email to send or receive classified intelligence.

More breaking news: even though it’s an important story, it’s simply not resonating with the same ferocity Clinton-haters are wishing for.

Does it matter that Clinton used a personal email server? Of course it does, and she ought to face scrutiny for it -- only insofar as every high ranking official who uses a private email account ought to be scrutinized. So far, it's really only Clinton who's being hectored about using her own server. The fact that she's running for president is a fairly decent excuse for doing so, but if that's the case, why isn't Jeb Bush being just as heavily flogged about it?

Back in March, The Washington Post published an article detailing how Bush used his private email account and its accompanying personal email server to send and receive what seems on the surface to be sensitive messages relating to National Guard troop deployments and post-9/11 security concerns. His email was sent and received via a private "homebrew" email server based inside his Tallahassee office. Bush "took it with him when he left office in 2007."

Bush's aides said the information was "mostly" public knowledge at the time the emails were sent. Regardless, the article reported that the emails contained discussions of "troop deployments to the Middle East and the protection of nuclear plants." Not unserious issues, to be sure.

In one e-mail sent four days after the Sept. 11, 2001, terrorist attacks, the top general for the Florida Air National Guard told Bush that “we are actively planning sequences in preparation for mobilization orders should they come.” [...]

In November 2001, Bush and an aide to then-Lt. Gov. Frank Brogan exchanged messages about the deployment of National Guard troops to a nuclear power plant in Crystal River, Fla. The aide wrote Bush that a state lawmaker had called to say she thought “it is imperative that the Crystal River nuclear facility have National Guard security.”

Bush wrote back: “Florida power does not want it. We are reducing or getting rid of guard protection in the other plants.”

That last line, to me, is the real bombshell -- that within two months of 9/11, Bush ordered the National Guard to pull its troops from protecting nuclear power plants in Florida, simply because the private corporations that operated the plants didn't want the protection. I wonder if the people who lived near the plants wanted the protection.

Combine this news with the fact that Colin Powell also used a private email server at a time when the internet was far less secure than it is now, and we can only conclude: 1) For a good long time, it appears mostly commonplace for public officials to use a personal email address, and 2) They probably shouldn't have due to security and transparency concerns. But in the grand scheme of things, it's a D-list level scandal -- water under the bridge. What's crucial now is that everyone running for president is held to the same standard, and that both state and federal governments take action to make sure the system is as transparent as possible.

I also think it's curious how the news media treated the Clinton email story, when it broke back in March, as if the existence of her email was previously unknown. Most of the press seemed to have forgotten about a 2013 bombshell article by The Smoking Gun that first reported the existence of Clinton's email account. While it’s true that new details have come to light since 2013, such as the existence of the homebrew server, it’s been treated in its entirety as a brand new story, and none of the reporting since March has acknowledged that her private email account was exposed two years ago. This story is, yes, still developing, but it is also two years old.

In March of 2013, The Smoking Gun broke the story of the infamous "Guccifer" hacker who acquired personal emails from former Clinton aide Sidney Blumenthal. Inside Blumenthal's inbox were numerous emails received from Clinton using her "hdr22@clintonemail.com" address. Gawker reported at the time:

And why was Clinton apparently receiving emails at a non-governmental email account? The address Blumenthal was writing to was hosted at the domain "clintonemail.com" (we're not going to publish everybody's email address!), which is privately registered via Network Solutions. It is most certainly not a governmental account.

Staffers in the Bush White House famously used private email accounts to conduct government business as a way to circumvent the Presidential Records Act, which mandates that all official communications be archived.

But the year now is 2015, and the story is amplified by the desire to politically hobble Clinton. And voters know it.

Ultimately, however, no one cares because it's an old-school scandal, with hints of partisan right-wing horseshit stirred into the mix. Our 2015 scandals involve fetuses, controversial tweets and Mexican rapists. Things everyone can understand. The Clinton story involves IT jargon and inside-the-beltway bureaucratic argle-bargle. Additionally, the public is at least savvy enough to understand how the press despises the Clintons. Concurrently, the public also understands that the Clintons are a known commodity. We know what we're getting, and in spite of the roster of Clinton scandals, they're proven competent leaders; one of whom presided over significant prosperity in the middle-to-late 1990s. A story about Clinton's email account isn't nearly enough to stir up alarm among average voters, and certainly not enough to crush Hillary's chances in the election, which, by the way, is still 14 months away.