The laughable hypocrisy of the GOP's Trump backlash

Trump has never disguised his complete and utter contempt for women. Neither has the party now condemning him 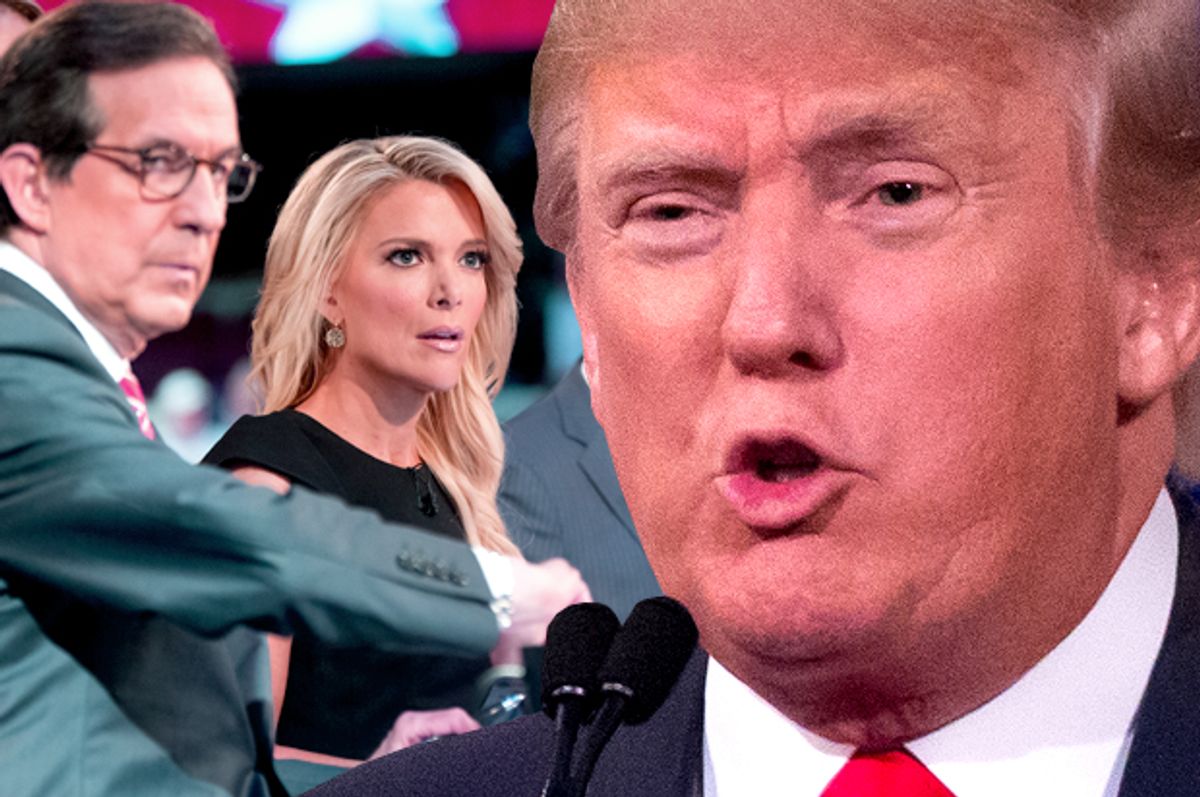 Donald Trump is a misogynist. This has been indisputable for decades, but many Republican leaders are finally starting to agree there might be something, you know, bigoted about Trump’s eagerness to use every sexist trope in the book to attack women he takes issue with.

Conservative posturing about the evils of misogyny is sheer opportunism; that is hardly in dispute. Trump has been a pig as long as he’s been in the public eye, calling Rosie O’Donnell a “fat pig,” saying women from Gail Collins to Arianna Huffington are ugly because they disagree with him, and suggesting Anne Hathaway is a golddigger. That his hateful attitude toward women suddenly offends Republicans has little to do with sincere objections to misogyny and everything to do with the fact that Republican leadership wants Trump to end his stunt race now, before his antics do any further damage to the Republican brand.

But while Republican leaders have started to express disgust about Trump’s misogyny, Trump denies the charge, claiming, “I cherish women. I want to help women."

That Trump pulls this card is hardly a surprise. You’ll have more luck finding a talking dog than a misogynist who openly cops to hating women. The dictionary may define misogyny as “hatred, dislike, or mistrust of women” but it’s usually a little more complex than that.

Your average misogynist, like Trump, often claims -- may even believe -- that he loves women. But that supposed love comes with a caveat, which is that he expects a woman to be subservient and know her place. If a woman steps out of line by disagreeing with the misogynist, rejecting his instructions on how to live her life, or behaving or dressing in a way he doesn’t like, that’s when the anger and hatred come pouring out.

Misogyny is more about male entitlement than anything else. It’s a direct result of men feeling entitled to women’s obedience, submission, silence, fawning adoration, or some combination of all of these. When the misogynist claims he loves women, he means women who are deferential to him and his desires. Incidentally, this also explains why there are so many female misogynists — women who have absorbed the message that women should be deferential to men and attack any women who disagree.

This is why it’s such an eye-rolling moment when sexist politicians or public figures push back against criticism by citing their love for their wives or daughters. No one is surprised that a sexist man thinks well of his doting wife. The question is how he feels about women who defy his instructions on what to believe and how to live and how to talk to men.

When a conservative like Erick Erickson defends Megyn Kelly while lobbing sexist vitriol at feminists, he’s not actually doing anything different than what Trump is doing. Like Trump, Erickson either puts women on pedestals or believes they are disgusting tramps to be spat upon. Like Trump, Erickson believes that the way to tell which woman is good or bad depends on whether she’s deferential to him. The only point of contention here is how to categorize Megyn Kelly. Since Erickson agrees with her, he wants to give her pedestal status. Since Trump disagrees with her, he wants to give her gutter status. But both men firmly agree that actually respecting women as equals, instead of objectifying them as either trophies or trash, is completely out of the question.

All of which is why none of this appears to be hurting Trump in the polls. Trump’s conservative critics aren’t really denouncing the practice of trying to put disobedient women in their place by telling them they are fat, ugly, slutty or should be ashamed of themselves for having female body functions. The only real point of contention is whether or not Megyn Kelly should be subject to the same treatment that any other woman who crosses an angry, sexist man will get. Since there’s no broader principle at stake, it all just looks like a pissing match between Trump and people who want someone else to get the Republican nomination. And it looks that way because that’s all it is.

Trump supporters aren't stupid. They grasp the incoherence of the Republican mainstream opinion. If sexism is an acceptable weapon to use against liberal women who speak out against you, then why is it suddenly not okay when the disobedient woman is a conservative? Most of Trump’s supporters don’t like it when feminists and liberals tell them not to call women bitches and sluts when they feel like it, so it’s not surprising that they’re not going to listen to conservatives to cut it out just because this particular woman works for Fox News.

This feud may end up hurting Trump in the polls, but it won’t be because he’s a misogynist. It’s clear that neither his supporters nor his conservative detractors give a fig about that, and as soon as this is all over, most will join back together to keep lobbing the same nasty insults at feminists and women in Democratic leadership. So this really comes down to a popularity contest between Trump and Kelly. Will Kelly's not inconsequential fan base in the conservative movement outgun the loud and proud Trump constituency? The answer is still unknown, but even if the Trump machine collapses, genuine conservative outrage over sexism will have played no part in it.