Britain's Bernie moment: Is an unlikely left-wing hero about to conquer the Labour Party?

In this extraordinary year for political outsiders, Britain's Jeremy Corbyn may be the biggest story of all 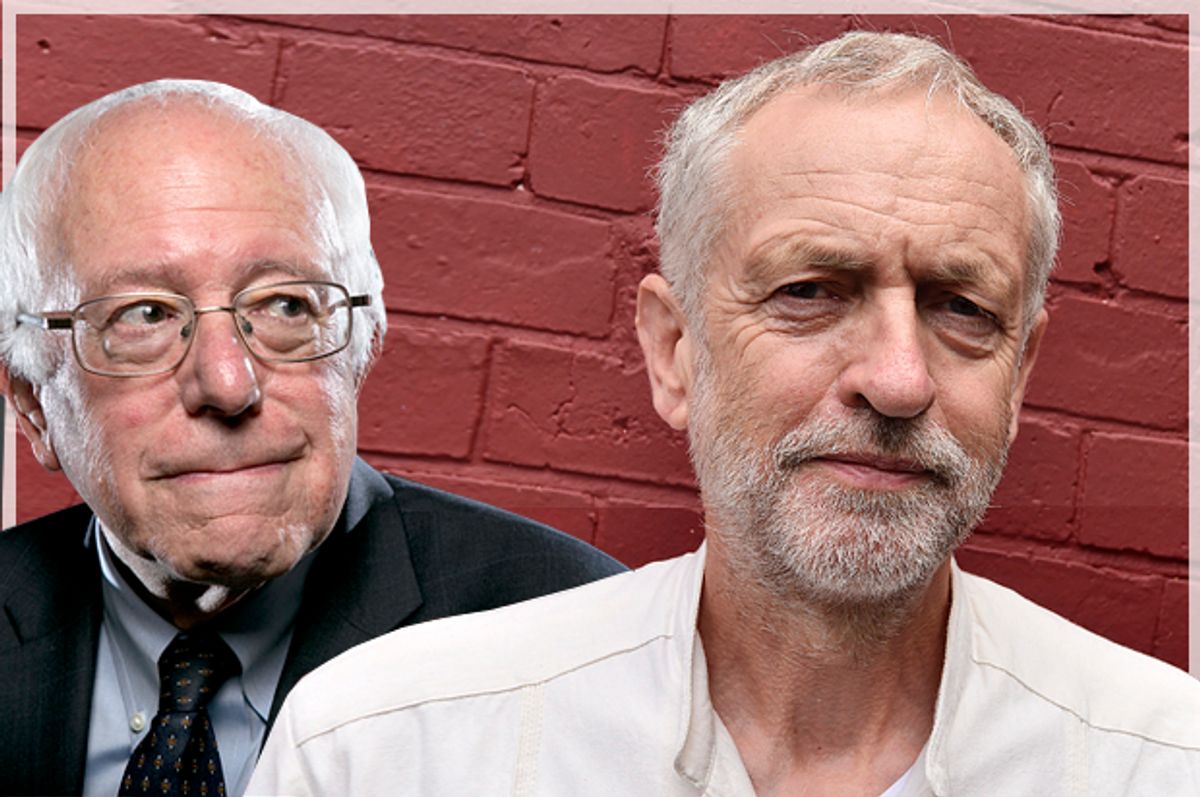 Britain’s Labour Party is going through its own Bernie Sanders moment – except that it’s more like a Bernie Sanders moment on steroids and set to warp drive. Try to imagine this: We’re days away from the Democratic convention and Sanders has somehow accumulated nearly enough delegates to win the nomination, while Hillary Clinton and the party leadership desperately try to stop him through coercion or unscrupulous personal attacks or last-minute rule changes.

If that sounds like a wildly implausible scenario or, more precisely, like the kind of insurrection that modern party politics is designed to prevent, so does what’s happening in Britain right now. If we could go backwards in time a mere three months, to the immediate aftermath of Labour’s disheartening defeat in the May general election, and tell the British media and political elite that they were about to get sandbagged by a populist uprising that seemed to come out of nowhere, I suspect the response would involve widespread hilarity along with the phrase “daft bloody Yanks.”

Yet instead of veering back toward the blithe neoliberal centrism of the Tony Blair era, as conventional wisdom dictated, the Labour Party is on the verge of being overrun by a left-wing insurgency led by Jeremy Corbyn, a 66-year-old socialist who could teach Bernie Sanders what that word actually means. Michael Meacher, a former government minister and one of the few Labour insiders to embrace the Corbyn insurrection, has called it “the biggest non-revolutionary upturning of the social order in modern British politics.” If there are obvious parallels between Corbyn and Bernie Sanders, the former is actually more of a political outsider, whereas Sanders is widely liked and respected by his peers in the Senate. A longtime member of Parliament from North London who appears not to own a tie, Corbyn has spent his entire political career as a rebellious Labour “backbencher” – that is, he has never been part of the party leadership, nor held a government post when Labour had a majority.

Until a few weeks ago, Corbyn was widely viewed as a hopeless anachronism within post-Thatcher British politics, a ‘60s throwback with bad clothes, dubious party loyalty and more than a tinge of Cold War red. (Actually, compared to the fashion-hopeless Sanders, Corbyn cuts quite a stylish figure in a distinctively English ascetic mode.) Now, he may be within days of becoming Labour’s parliamentary leader, and its prospective candidate for prime minister in the 2020 national election.

Like Sanders, Corbyn has long advocated for a rejection of austerity politics and a return to seemingly outmoded policies of ambitious social spending, government activism and higher taxes on big business and the rich. He has proposed universal childcare and free higher education for all, wants to renationalize Britain’s railroads and utilities, and believes the country should withdraw from NATO, scrap its nuclear missiles and invest most of its military budget in job programs. Hilarious, right? Political suicide! Talk about being out of touch with reality!

Well, nobody’s laughing at the old-time lefty crackpot now. What few saw coming – and this happened with Sanders too – is that those old-school social-democratic ideas only sound outmoded to those who have been around long enough to be relentlessly indoctrinated with the Reagan-Thatcher ideology that the era of Big Government was a dreadful failure and that the true path to prosperity involves endless rounds of tax-cutting and “belt-tightening.” To younger generations raised amid the depressing, pseudo-Calvinist piety of permanent austerity and downward mobility, the revolutionary notion that the government might actually help you get an education, find a job, afford a decent place to live and raise your family -- instead of just standing there and scolding -- doesn’t sound old or tired in the slightest.

When Corbyn announced his intention to run for the party leadership position as an anti-austerity candidate, Labour’s establishment could quite likely have shot him down. In the British system, internal party elections are private affairs; the parties set their own rules about who gets to run and who gets to vote. Corbyn’s candidacy was approved by a bare minimum of his parliamentary colleagues, more or less as a symbolic gesture to the old-line Labour left. (He needed 35 votes and got 36; you have to wonder how many of them would take back that vote if they could.) From reading the British press, you get the impression that Labor’s phalanxes of pollsters and consultants and strategists were taken totally by surprise when Corbyn’s campaign immediately captured a wave of popular support, and still can’t quite believe it’s happening.

Corbyn has faced overwhelming opposition from prominent Labour elected officials and party apparatchiks, along with increasingly critical coverage from the Guardian, which has endorsed Yvette Cooper, one of his moderate opponents. If anything, that has only fueled his momentum. Over the past week or so, the tone of anti-Corbyn intra-Labour hate has grown increasingly strident and hysterical. He has been accused, almost literally, of palling around with terrorists -- of being overly amenable to negotiations with Hezbollah and Hamas, and of vague associations with Holocaust deniers and 9/11 truthers. (Much of that came in the form of an especially disgraceful Guardian article by centrist Labour blogger James Bloodworth, who has embraced the role of party establishment hitman.)

Some Labour officials have actually proposed postponing the leadership election (which is conducted by mail, and will be completed on Sept. 12), presumably to find some pretext to kick Corbyn off the ballot or purge his supporters from the rolls. In the last days of the campaign, Corbyn’s three rivals for the Labour leadership position have formed a united opposition front, even declining to offer the customary assurances that they will support him if he wins. The most right-wing candidate, Liz Kendall, who has trailed badly in the polls, says that choosing Corbyn would amount to “submitting our resignation letter to the British people as a serious party of government.” Former Prime Minister Tony Blair, who won three elections with his rebranded “New Labour,” recently waded into the fray, warning that the party could face “annihilation” under Corbyn, who needed to be stopped with a "rugby tackle." (Which is pretty tough talk from the guy who spent the Iraq war polishing George W. Bush’s boots.)

If no one finds Corbyn’s politics so amusing anymore, there is an element of comedy in the Armageddon that Labour’s centrist establishment may have called down upon itself. In the interest of greater transparency and democracy, the party opened this year’s leadership election to anyone who registered online as a party supporter and pay a minimal fee – and the apparent result is a whole lot more democracy than they wanted. Ballots started going out this weekend to 610,000 or so Labour members and supporters – more than half of whom signed up during the current campaign and are highly likely to be Corbyn voters. Labour’s leadership underestimated the public appetite for candidates and ideas that lie outside the safe zone of neoliberal consensus politics, and is now likely to reap the whirlwind. It’s a lesson that will not be lost on political leadership castes around the world.

It’s quite possible that Tony Blair and the other mainstream critics are correct that old-school socialists like Jeremy Corbyn and Bernie Sanders are too easily demonized by the right, and are not “electable” in conventional political terms. (Opinion polling suggests that Corbyn may now be the most popular politician in Britain, but such things are transitory.) But their emergence testifies to the failures of conventional politics, and whether they can win elections is less important than the worldwide hunger for change they have momentarily captured. Neither of them offers anything close to a political panacea, in my view, but they represent a rising tide of resistance against the global cult of fiscal austerity and corporate capitalism, as do Syriza in Greece and Podemos in Spain and other emerging left-populist movements. (Donald Trump does not belong in that group, but he represents a bizarro-world inversion of the same phenomenon.)

Even if the Labour Party establishment can find a way to stop the Corbyn surge – and it’s definitely trying to, by fair means or foul – it runs the risk of burning down Britain’s venerable working-class party in order to save it, or making it look hopelessly out of touch with its own core supporters. Win or lose, the Corbyn rebellion has launched a political chain reaction whose destabilizing effects will extend well beyond Britain. From this side of the Atlantic, Hillary Clinton’s inner circle of advisers and strategists are watching with increasingly green expressions, telling themselves over and over: It can’t happen here.