I am a souvenir hoarder: I'm the guy who can't throw café napkins and hotel stationery away

I've become a paper packrat, nostalgic for nostalgia, enthralled by the detritus of trips taken and vacations past 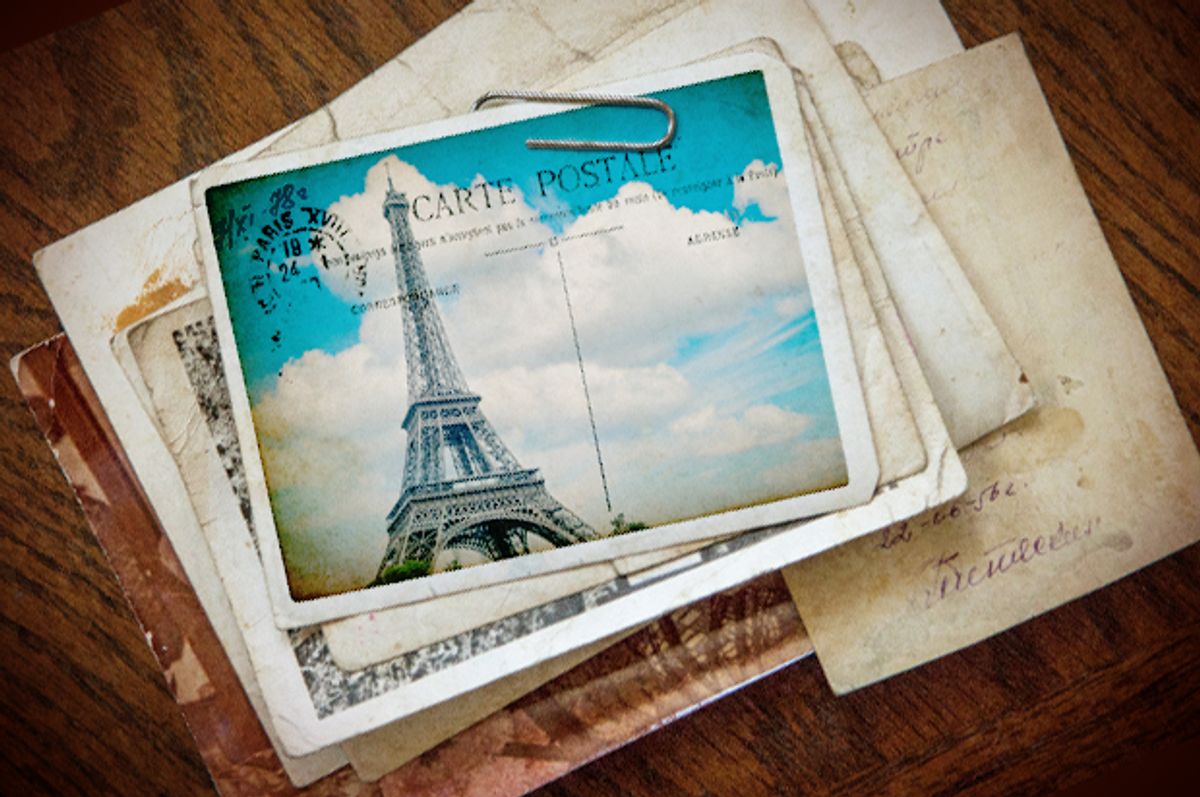 One of the features of summer vacations used to involve bearing back mementoes and knickknacks to sentimentally clutter up shelf space at home. But in Istanbul, where my girlfriend and I keep an apartment, mustached vendors now hawk selfie sticks where roving souvenir sellers once plied their trade. My heart twinges every time I come across the sight.

These Instagram days, does any sunburned visitor to Barcelona or Capri or Cape Cod still browse a postcard rack or a newsstand?

As the boyfriend and plus-one of a globe-trotting food writer, I live a nomadic life for a good part of the year. And I come home with souvenir booty: color-saturated postcards from Marrakech, Paris, Granada, Sorrento; and touristic calendars from Rome (the pope, the Trevi Fountain), Venice (gondoliers under the Rialto Bridge), and Moscow (the monumental Stalinist metro stations). I come home too with café napkins, such as from Café Tortoni in Buenos Aires where Borges liked to loll; and hotel stationery from the rambling homey Richard Löwenherz in the Wachau, Austria, or the sleek Island Shangri-La in Hong Kong.

The counters and shelves of my small apartment in Queens are awash in all this handleable non-digital ephemera — not to mention the museum brochures and pamphlets, the foldable city maps (mobile apps hold no magic for me).

“You’re the only man I know who brings back hotel shopping bags!” exclaims my girlfriend, who doesn’t share my affection for such objects of memory.

In response I quote to her Susan Pearce, an eminent English academic theorist on collecting who characterized souvenirs as “intimate and bittersweet, with roots in nostalgic longing for a past which is seen as better and fuller than the difficult present.”

Doubly so when the mode of souvenir is becoming nostalgic itself.

What the cultural critic (and postcard collector) Walter Benjamin famously wrote in 1936 about the diminished aura of a “mechanical reproduction” (e.g., a postcard), compared to the unique authenticity of a work of art, requires a rewrite, I think, for the post-analog age. Postcards and their calendar cousins possess a certain authentic glow now as tangible, discrete, physical things, compared to the never-ending streams of disembodied cyber images on social networks. These small, sunny, printed mementos that used to represent the commoditization of travel have turned artisanal and “slow.” Poignant in their anachronism.

But I’m not a serious postcard collector. I’m no deltiologist, as such folk are formally called (postcards apparently still remain the third most popular collectible overall, after stamps and coins, despite the calamitous drop in their vacation mailings). I don’t aspire to be Benjamin or Walker Evans, the great photographer whose postcard collecting, begun in boyhood, ran to some 9,000 pieces, sorted into categories. I don’t do categories or keep count. I don’t troll flea markets or shops for hidden gems. I pick up my postcards and souvenirs — carefully — as I go along, as suggestive agents and operatives of what I call “colorized” memory. Call me a sentimentalist, a nostalgiaist — call me a tat-based daydreamer. Call me selfish. I don’t send postcards from abroad (I use email and now Instagram too). I’m not interested in any found poetry of what people wrote on the back. I avoid used cards.

Walker Evans prized a “documentary” quality in his mainly black-and-white postcards, of street scenes particularly. I go for fanciful Ektachrome of faraway places. For me, these bits and pieces I bring home, no matter how humble — nothing over $25 — are emblems and trophies I can use to intimately imagine life — happily, wistfully, deludedly — as a never-ending Grand Tour. The sight of one of my souvenirs as it lies in the clutter of my dim apartment in Queens will rouse a bright exotic recollection, set off a selective Proustian flare. Would I lose the precious cheering fragments of memories if I lost the actual physical object? Well, I’d lose the mnemonic pushbutton, the madeleine. Because whenever my eye happens to fall on, say, that blue business card I magpied from “Sombreros Antonio Garcia,” with its brown silhouette of a flat-hatted horseman, then the shop and the street in Seville where I took it blooms in my mind, and then a walk in an Andalusian garden thick with purple flowers, and the three comidas (lunches) in one afternoon we endured on one of my girlfriend’s assignments — all of  which may or may not have been the same day, but blend into a fumy evocation of my times in Seville. A smartphone photo doesn’t work that way. Pixeled images lack the suggestive power of physical relics.

Of lots of physical relics. The writer Dominique Browning recently wrote a defense of clutter, of the pleasures of owning many objects. But she felt compelled to note, triumphantly — she’s a former editor of House and Garden — that a “stained and rickety table” of  hers was actually “a Chinese altarpiece from the Ming dynasty with rolled bamboo marble top.” But I don’t claim “value.” My clutter is, again, papery slush mostly — gatherings of ephemera, and old at that; see my calendars. But I bet Hemingway could relate. That great he-man of adventure turns out to have been a paper packrat, a sentimentalist who hung onto old Christmas cards, receipts and hunting licenses. No doubt Marie Kondo, the princess of tidiness, would set her decluttering juggernaut against us both. She particularly doesn’t care for paper. But then again, her organizing credo is that possessions should “spark joy.” And don’t my souvenirs and knickknacks bring me that?

But I embrace a very non-Kondo disarray. I do not organize what I have; I like to leave things dotted around in a larger, general sprawl, with occasional clusters. So I can wander my apartment like a daytripper — like a flâneur, that poetic stroller of 19th-century Paris streets dear to Benjamin’s heart. So I can be happily surprised by serendipity as I suddenly notice again a souvenir while I’m perhaps trying to locate something else more mundane, like a utility bill. In his essay on clutter, the psychoanalyst Adam Phillips observed how “if you lose something [in the clutter] you may find something else in the process of looking for it.”

I admit that having all these travel souvenirs around can produce overstimulation, a memory overload. So I keep many of my postcards inside their purchase packets, to be dipped into occasionally like boxed chocolates for a nibble. I admit further that my cluttered, keepsake ways became for a while part of the “more difficult present” that Susan Pearce cited. Particularly when I started hanging onto large amounts of non-travel items like liquor-store cardboard boxes and plastic grocery bags. I had to undertake a major decluttering project, which proved a struggle; but it turned out well, I’m happy to say. I wrote a book about the whole business. I retained all my souvenirs, though, of course, still dotted about. But over at my girlfriend’s place, where I spend my nights, she keeps a tight rein on my sprawling inclinations. Her own travel mementos are shipshape and of a highish order: a display plate, say, from the Stalin museum in his Georgia hometown of Gori. Showing how Russia’s and Georgia’s collective nostalgia for a terrible past finds an uneasy expression in gift-shop knickknacks.

Finally, I admit that Susan Pearce does assert, somewhat harshly, that “no one is interested in other people’s souvenirs.” Meaning, I suppose, the intimate wonderfulness of the memories and visions evoked are solely in the eye of the beholder. The same for the souvenir itself. Which really is fine by me — the more to savor all for myself, here in my private memory-and-mood theater. Where I can switch gears from my cards and calendars (if I care to) and  browse some of the pics on my new smartphone. From just this summer’s travels, I seem to have some 4,000 of them.

Barry Yourgrau is the author of the new book "Mess: One Man’s Struggle to Clean Up His House and His Act." His other books include "Wearing Dad’s Head," "Haunted Traveller," "A Man Jumps Out of An Airplane" and "The Sadness of Sex."