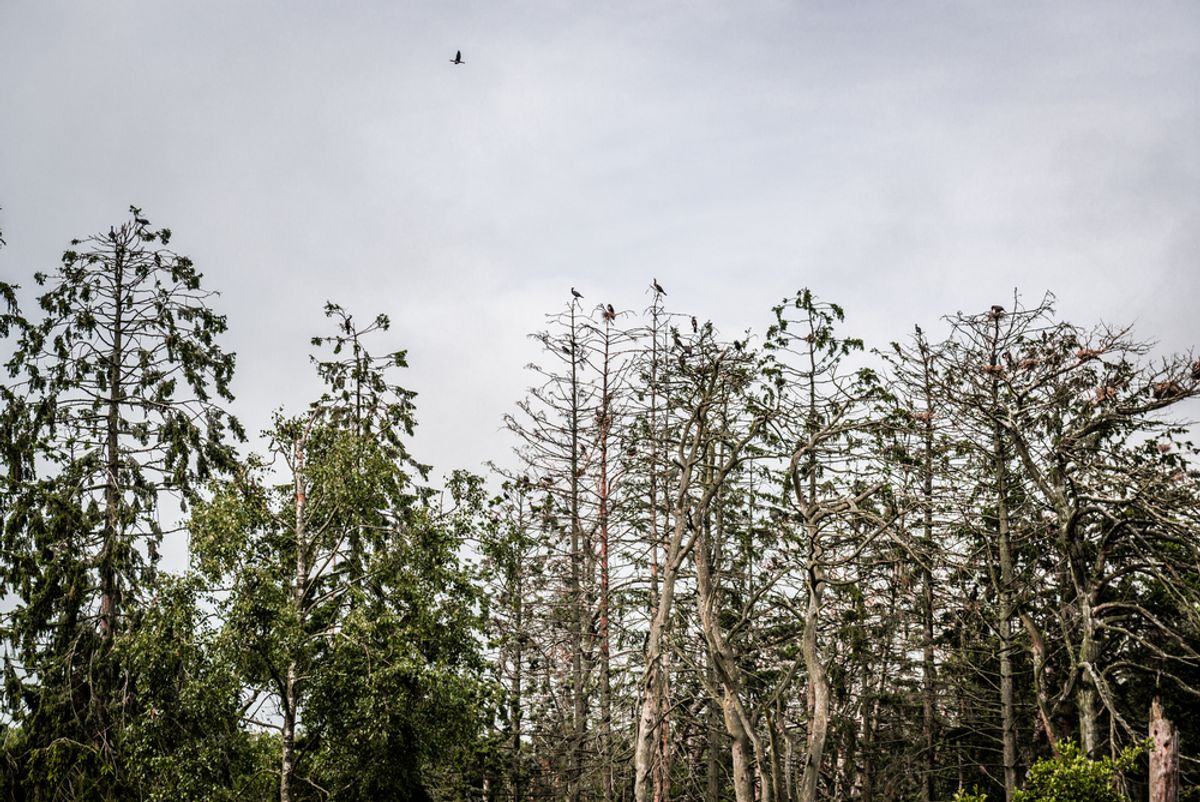 Four years of drought is continuing to take a punishing toll on California's trees, with implications for habitat, landscapes and even human safety.

Aerial surveys conducted by federal officials earlier this year found that already, more than 12.5 million trees have fallen victim to the severe lack of rainfall. The problem is so severe that, in a place where people are cutting down on their water usage and letting their lawns go brown in the name of conserving what's become a very limited resource, some cities are delivering truckloads of water to their endangered pines and fruit trees, San Jose Mercury News reports.

The urban struggle is being framed as one of preventing blight: conservationists are attempting to draw attention to how the deaths, which will endure even after the rains return, will mean a loss of shade and, in all likelihood, declining property values. "We need to water these trees somehow, by guess or by golly," was how Palo Alto city arborist Dave Dockter put it. "We cannot let trees -- some growing for 50 to 75 years -- go south. They are an investment in our quality of life."

Dying trees, of course, are also flammable, making the state's lengthening wildfire season all the more dangerous. They affect water quality by allowing more runoff to make it into streams, and their loss, as a carbon sink, can in the long term make climate change -- a factor in the current drought -- even worse. They pose an immediate risk, moreover, to those who stroll, or sit, or build beneath them.

Two recent incidents, the L.A. Times reports, are "focusing attention" on the plight of trees, including the tragic deaths last week of two children killed by a falling tree branch as they slept in a tent at Yosemite National Park. It's unclear what exactly caused the branch to fall. But thirsty trees, experts note, are more prone to infestation, making them brittle, and long periods of drought followed by sudden bursts of rain can be dangerous, as well -- those factors are believed to be behind the toppling of an 85-foot pine last month in a Pasadena park, injuring eight children.

“California is currently in its fourth year of drought, where it is receiving abnormally low rainfall amounts. This probably resulted in the Italian stone pine not receiving adequate amounts of water,” read the official report of the arborist hired to investigate the incident.

According to biologist Jeffrey Moore, acting regional aerial survey program manager for the U.S. Forest Service, it's "almost certain" that a million more trees will be counted among the dead before summer's end.