Instead of running as fast as he can from George W.'s cataclysmic failures, he's doing...well, exactly the opposite 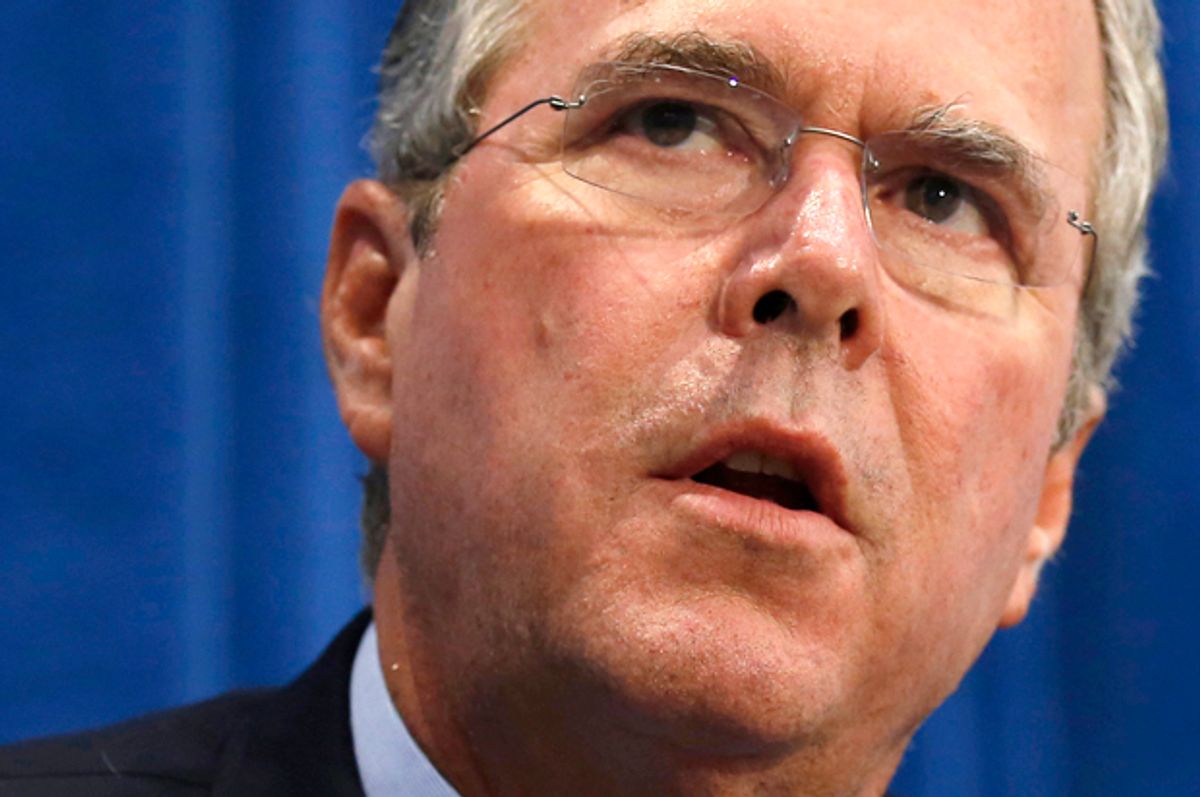 Considering the level of clownish extremism in the Republican primary during these mangy dog days of August, it's probably inevitable that we would start to see headlines like this one from the Washington Post on Friday:

At Iowa State Fair, Jeb Bush plays the sober adult in a summer of anger

Ah yes, the proverbial "grown-ups are back" story from the beltway press. The last time they characterized Republicans that way they were talking about the mature, serious leadership of George W. Bush and Dick Cheney. You remember, the president who engaged us in a decade-long war under false pretenses and the Vice President who said that waterboarding was a no brainer? Those adults.

This time, however, the press seems to be indicating that "adult" means lifeless, dull and incoherent, at least as it pertains to the third in line for the throne, Jeb Bush. The article in question tells the story of Jeb's trip to the Iowa State fair, where he's just an "awe shucks" sort of guy hanging with the folks:

"I’m tired of the divides," the former Florida governor said. "I campaign the way that I would govern — out amongst everybody, no rope lines, totally out in the open."

"The term Common Core is so darn poisonous I don’t even know what that means," Bush replied. "So here’s what I’m for: I’m for higher standards — state created, locally implemented where the federal government has no role in the creation of standards, content or curriculum."

Bush parried the questions with ease and energy, appearing to avoid the kind of gaffes that have plagued other candidates at the soapbox, which is sponsored by The Des Moines Register. In 2011, after all, Mitt Romney stood on the same stage and declared, "Corporations are people" -- a line that dogged him seemingly forever.

Can you see the problem there? First, let's get the Common Core thing out of the way. Bush has been a proponent of the program since its inception. His name is intimately associated with it. Perhaps it's not as big a gaffe as "corporations are people" but it's far more dishonest. Basically, he's disowning something that he's been in favor of for years without admitting it.

But it's the other set of questions about using his brother's advisors and his current thinking about the Iraq war that are of interest. After all, there is no foreign policy decision more controversial in the last several decades than the decision to (virtually unilaterally) invade Iraq on a very thin legal pretext and based on intelligence that was dubiously obtained and disseminated.

He was specifically asked about his repeated statement that he would call upon one of his brother's most dubious advisors, Paul Wolfowitz -- which, as I've written here at length, should be a problem for anyone running for president. Paul Waldman describes his ever evolving rationales about the current problems in Iraq in this piece and it's clear that Bush's understanding of what happened is either very rudimentary or he's being deliberately dishonest. Saying that getting rid of Saddam was "a good deal" is not going to smooth over the the searing reality that the region is in chaos, and blaming Obama for the fallout doesn't change the fact that the invasion was the most disastrous foreign policy decision in modern memory.

Bush brushed off the question with an answer that should set off alarms in the minds of anyone who's been following politics for the past 30 years:

"I get most of my advice from a team that we have in Miami, Florida. Young people that are going to be ... they're not assigned, have experience either in Congress or the previous administration.

"If they’ve had any executive experience, they’ve had to deal with two Republican administrations. Who were the people who were presidents, the last two Republicans? I mean, this is kind of a tough game to be playing, to be honest with you. I’m my own person."

Who were the last two Republican presidents, you ask? Well, they were both named Bush and they both temporarily experienced sky high approval ratings when they decided to wage war in the middle east and then both left office in disgrace, loathed by nearly everyone in both parties. Jeb's insistence that the only people with "any executive experience" already worked with his dad and his baby bro makes it seem like he has no choice in the matter, except to take advice from the guy who was arguing for invading Iraq on Sept. 15, 2001. Uh huh.

The question is whether this issue is salient enough to hurt Jeb in the primaries. There are those, like liberal columnist Eugene Robinson who correctly observe that however much Jeb desires to cast off the smothering cloak of his brother's very recent failed record, his policy statements indicate that it's only campaign talk:

Bush says "we do not need ... a major commitment" of American ground troops in Iraq or Syria to fight against the Islamic State -- at least for now. But he proposes embedding U.S. soldiers and Marines with Iraqi units, which basically means leading them into battle. He proposes much greater support for Kurdish forces, which are loath to fight in the Sunni heartlands where the Islamic State holds sway. And he wants the establishment of no-fly zones and safe havens in Syria, as a way to battle both the Islamic State and dictator Bashar al-Assad.

That all sounds like a "major commitment" of something. And none of it addresses the fundamental problem in Iraq, which George W. Bush also failed to grasp: the lack of political reconciliation among Shiites, Sunnis and Kurds. Bush 43's vaunted "surge" was a Band-Aid that masked, but did not heal, this underlying wound.

This piece by Peter Beinert about the vaunted "surge" spells out the details of that to which Robinson alludes. Jeb (like all the other Republican candidates) pretends that Iraq was a rousing success, and everyone was living together in peace and harmony until the evil team of Obama/Clinton blew it all up. This, of course, could not be further from the truth.

But this piece by Phillip Bump of the Washington Post blog The Fix, suggests this may not be the problem we might assume it would be, at least not on the Republican side of aisle:

There hasn't been a lot of recent polling on the public perception of the Iraq War, but there has been some. And that polling suggests that -- especially in a Republican primary election -- the war is not the toxic topic that it was in 2008.

In June, NBC News and the Wall Street Journal included support for the Iraq War in a long list of questions about how people would view candidates who held particular positions. For 64 percent of respondents, having backed the Iraq War either didn't affect their view of the candidate or made them view the candidate more favorably.

More telling is a survey the same month from Gallup. The polling agency compared the number of people who said the war was a mistake in February 2014 to the percentage saying that now, and broke out the results by party. Both Democrats and independents were more likely to say that the war wasn't a mistake than in the past -- but only 31 percent of Republicans thought it was a mistake at all. Leaving 69 percent with either no opinion or a favorable one. In a 17-person race, support from 69 percent of the electorate is surely more than welcome.

It was inevitable that the Republicans would find a way to make peace with the catastrophe in Iraq. They like war and they passionately backed that one at the time. It's very hard to reconcile the cognitive dissonance of having pushed that hard for war when forced to recognize the failure that followed. So, instead, they are rewriting history to show it as a thrilling victory that was reversed by the inexplicable decision by President Obama to bring the troops home. That's the kind of thinking that works for them.

In my opinion, Bush has problems with the base, but I'd guess it has more to do with his membership in the family that continuously embarrasses them. They don't like having to make excuses for their leadership. (And they have to do it so often.) It's also a matter of his lackluster personality. The Republicans are looking for a crusading partisan warrior this time out, someone who will carry their banner both domestically and internationally. Jeb Bush is a hardcore conservative, but he just doesn't deliver a punch with any passion. Perhaps they'll settle for him when all is said and done. But he doesn't get their blood pumping and they really want someone who does.

Bush's real Iraq problem comes in the general. If Clinton gets the nod, he will throw her war vote in her face and try to tie the chaos that exists there to her. And most Republicans will buy it. But it's hard to imagine that 50 percent plus 1 of this country will not see Jeb and think of that horrible period after 9/11 when the government invaded a country that had nothing to do with it. It's very hard for any Republican  to get past the party's association with a blunder of that magnitude --- it's impossible for a man whose last name is Bush.

And it sure seems as though somewhere deep down inside, Jeb knows it.