Non-politicians seize control: Trump, Carson & Fiorina are surging -- but how long will it last?

The insurgents are riding high in the polls. History suggests this won't last, but sometimes history lies 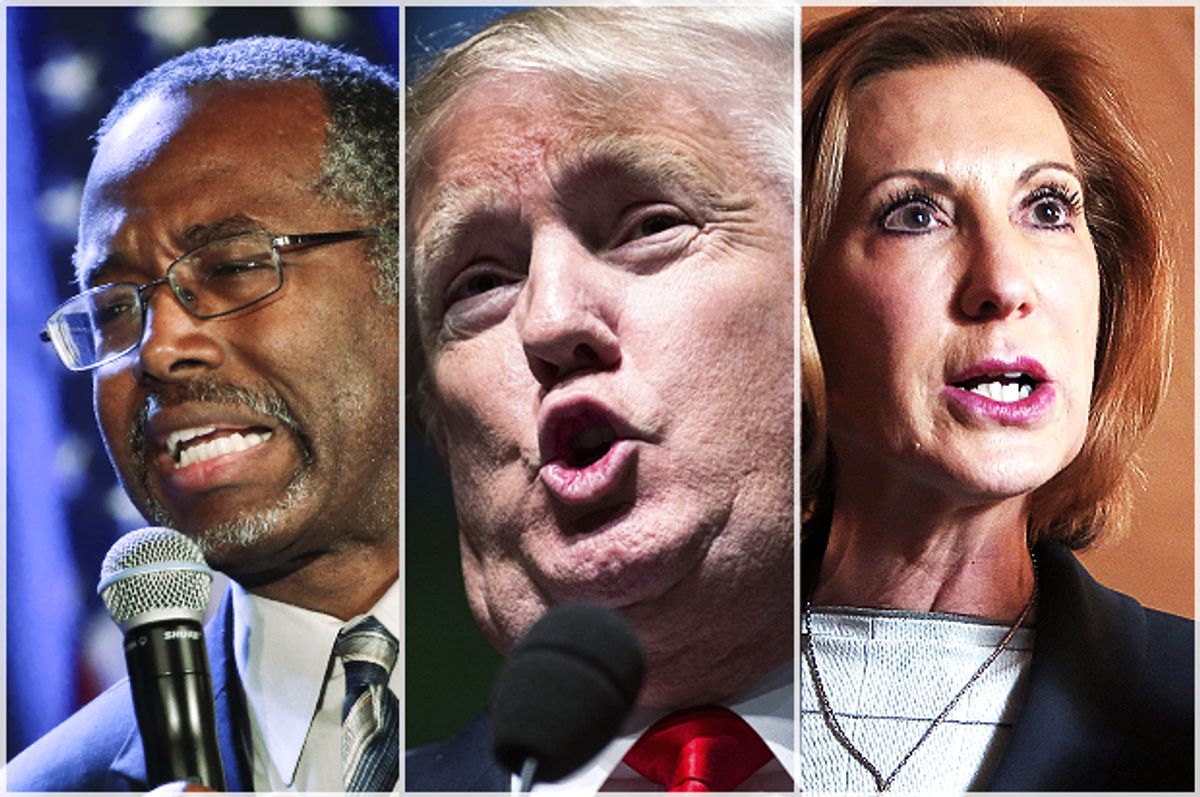 Enough time has passed since the first Republican presidential debate to offer a clear picture of the evening's winners. There are three.

Donald Trump, the candidate most well-versed in the language of winners (him) and LOSERS (all other humans), was most definitely a winner at the debate. Despite acting like a child during the debate and then remarking afterwards that Fox News debate moderator Megyn Kelly was probably on her period -- you know how it is with those women and their stuff -- Trump has shown few signs of collapsing since. He has been absolutely perfect on the campaign trail because he is simply perfect, to paraphrase a website that allegedly gets paid to say nice things about Trump. Even Bloomberg Politics' Mark Halperin, a newsman who earns a salary of one million dollars per year to identify political paradigm shifts known as Game Changers, has seen enough to slap on his trademark label:

Ben Carson was also a winner. Despite not getting that much speaking time during the debate, Carson told a couple of jokes that landed well and thus improved his position to become President of the United States -- just the way it should be. The Washington Post writes that Carson "saw a five-point jump in the polls — a 71 percent increase over where he was two weeks ago" and can, "as objectively as possible," be declared a winner. Carson is celebrating his boost by running around calling President Obama anti-Semitic for negotiating a nuclear deal with Iran. He's got all the tools for this nonsense world.

And lastly, Carly Fiorina was the winner of the kids' table debate. She spoke confidently and mentioned that she was friends with Israeli PM Benjamin Netanyahu, which was good enough to "beat" the likes of Rick Perry and Rick Santorum. Her polling has jumped from zero to the high single-digits, vaulting her from also-ran to competitive position overnight.

Every other shlub in the race is more or less holding still or falling. And that's fine, there's plenty of time yet. But if we take a snapshot of those who have gained from exposure in the debate -- or in Trump's case, maintained his yooooge, classy, black-marble-with-gold-trimmed lead -- we notice a discernible trend: the non-politicians are winning.

Sure, Carly Fiorina is not a total novice in electoral politics. She lost a Senate race to Barbara Boxer in 2010, like most people do when they run for office against Barbara Boxer. But she's neatly eradicated that from her resume, instead running exclusively on her tenure the first female CEO of a Fortune 500 company. And both Trump and Carson, as they like to remind voters at all turns, have no personal experience in electoral politics. And voters are rewarding them for this.

The playbook for what happens next should be clear. Voters may flirt early on with non-politician presidential candidates as an expression of frustration with politicians. There are thousands of years of jokes out there about how politicians are terrible and should never be liked, after all. But usually as time compresses and voters realize that they're voting for a president, not some oaf who brings the laughs, they err towards caution, experience and composure. And under the intense scrutiny of presidential election media coverage, non-politicians' limited political ability tends to reveal itself.

The playbook further suggests that the politicians with solid fundamentals, like personal popularity and lots of money, will ultimately benefit when the period of early flirtation ends. Look at, say, Marco Rubio. His polling numbers aren't great right now, but his net favorables are phenomenal, he'll have plenty of cash to go around, and his first debate performance earned strong marks. Rubio is the second-choice preference of many voters, a statistic that's arguably much more important in the long-term than any horse-race poll showing Donald Trump ahead right now.

But what if the playbook is wrong this time around? Perhaps Republican voters are so frustrated with what Trump would term "all talk, no action" politicians that they're not go to settle for caution in the end. Even the politician in the race who's done best since the debate, sitting United States Senator Ted Cruz, has done so by voicing a distinctly outsider message: that he is the only non-terrible politician in Washington, D.C. His day job strategy, for example, is to troll ultimate Washingtonian Mitch McConnell for fresh grandstanding material on the campaign trail.