Stephen Colbert opens up about faith, loss and Charleston in heartbreaking GQ profile: "Tragedy is sacred. People's suffering is sacred" 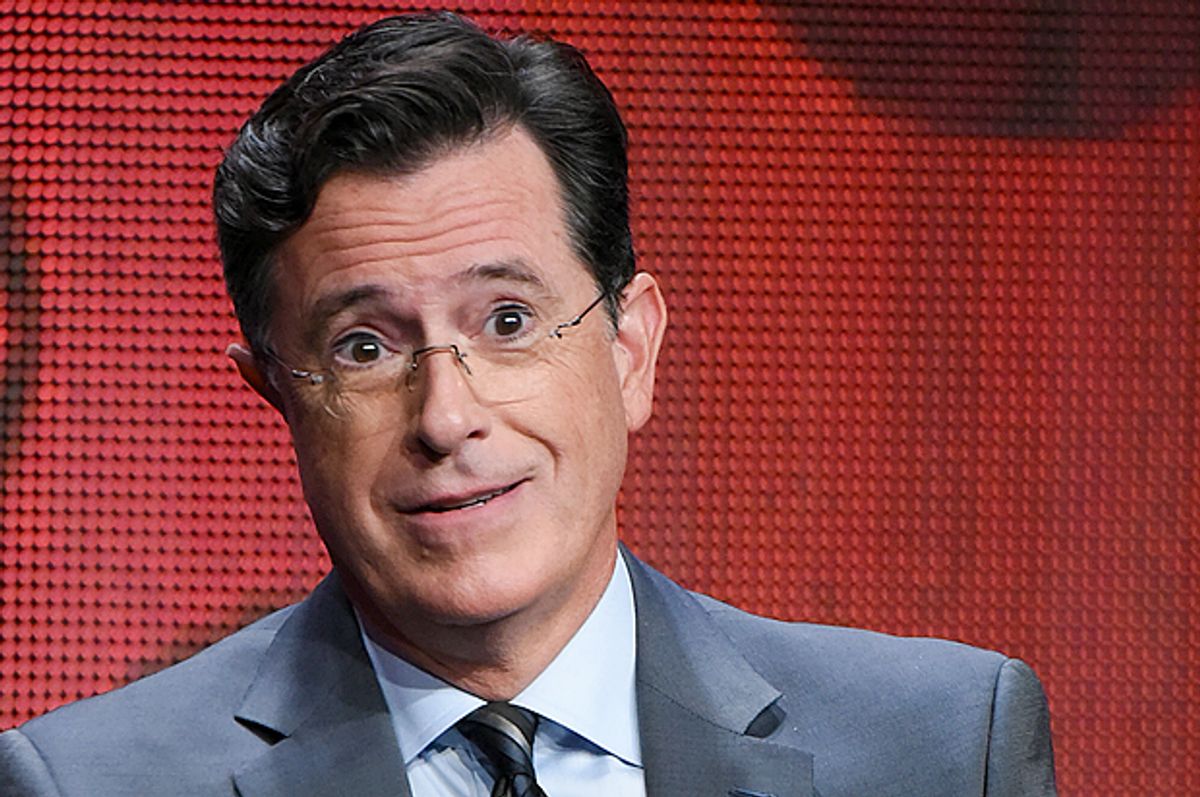 For a new cover story profile in GQ, Joel Lovell visits Stephen Colbert in the makeshift office of his forthcoming iteration of "Late Show" to find the host sleep-deprived from his secret guest-host stint at the helm of "Only in Monroe," a Michigan cable access show where he, playing it utterly straight, interviewed a local boy made good — Marshall Mathers, who couldn't decide just how serious Colbert was or was not being with him. Colbert tells Lovell he did it not just for the lulz of enacting a "Between Two Ferns" tongue-in-cheek scenario on an actual straight-faced cable access show but for more practical reasons: "First show! First show! Well, fuck the first show. There's going to be 202 this year—how do you do a first one? So I just wanted to go do a show someplace. And now we've done it."

The profile is far-ranging, and includes the tactical minutiae of how Colbert and his team assemble a test show, built around the mysterious shuttering of the New York Stock Exchange — which included a cameo by the legendary feral chicken that haunts the grounds of Litchfield Penitentiary on "Orange Is the New Black" — and the supervision of the building of the new "Late Show" set in the Ed Sullivan Theatre.

But the tone is more pensive than a celebratory "welcome back!" profile might normally be. Lovell asks Colbert how, given his role as "one of the country's few public moral intellectuals," that might be expressed in "Late Night," and Colbert replied in his thoughtful, understated fashion:

“I have a morality. I don't know if it's the best morality. And I do like thinking. If people perceive that as a moral intellectualism, that's fine. That's up to them to decide. A friend of mine once said, ‘If someone says you're influencing them, then you're influential. It's not up for you to say. You can't take that away from them.’ But it's entirely not my intention. This I promise you. Because that's a short road to being a comedian in all seriousness. ‘As a comedian, in all seriousness, let me not entertain you.’ ”

Comedy ultimately takes a backseat in this profile. Lovell and Colbert talk about the massacre earlier this summer in Charleston, Colbert's hometown, and his visit to the Emanuel AME Church and joining the march across the Arthur Ravenel Jr. Bridge. Lovell asks him if he wishes he could have talked about the tragedy on his show:

“We would have done it, if we had to,” he said when I asked if any part of him had felt a desire to talk about it on the air. “But no,” he said. “It's such an old form of a particular evil. Such a pure form, that it feels very old. It was like a dragon showed up. Like, yeah, there used to be dragons. I didn't know there still were dragons…and I don't necessarily crave facing that dragon with my little sword.” He paused for a moment and looked down at the table. “Tragedy is sacred,” he said. “People's suffering is sacred.”

Lovell also explores Colbert's close relationship to tragedy and how he emerged from the aftermath of the plane crash that claimed the lives of his father and two brothers when he was 10 with his faith intact and without the palpable sense of bitterness that infuses other brands of comedy fueled by personal devastation. Colbert learned to embrace a certain amount of discomfort that he feels naturally around people: “Obviously there's something defensive about it. What you're doing is sipping little bits of arsenic so that you can't be poisoned by the rest of your discomfort. You're Rasputin-ing your way through the rest of your life.”

Read the whole story on GQ.