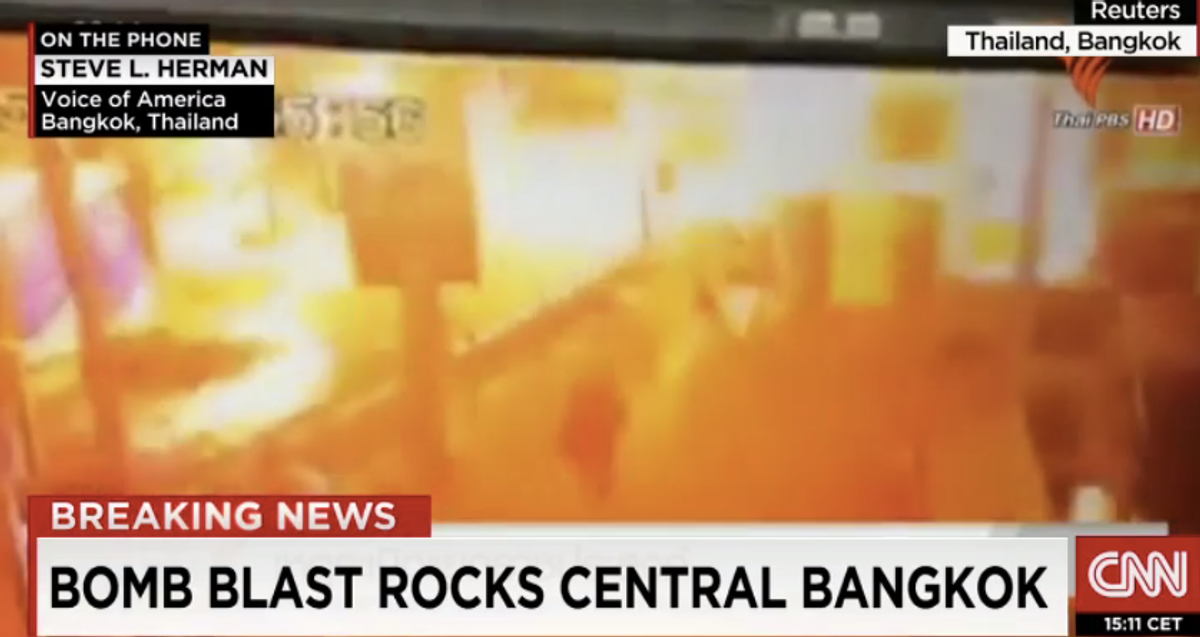 BANGKOK (AP) -- A bomb exploded at a popular shrine near a key political protest site in central Bangkok on Monday evening, the government said, reportedly killing more than a dozen people and injuring many others.

The bomb exploded inside the Erawan Shrine, and another undetonated bomb was found near the complex, said Maj. Gen. Weerachon Sukhondhapatipak, a spokesman for Thailand's ruling junta. The shrine is a tourist landmark also popular with Thais.

Thai PBS television said at least 15 people were killed. Weerachon said dozens were injured, and that some foreigners were among the hurt.

The shrine is located at Rajprasong intersection, the center of many contentious political demonstrations in recent years.

Security video showed a powerful flash as the bomb exploded.

"We still don't know for sure who did this and why," Deputy Prime Minister Prawit Wongsuwon told reporters. "We are not sure if it is politically motivated, but they aim to harm our economy and we will hunt them down."

Thailand's capital has been relatively peaceful since a military coup ousted a civilian government in May last year after several months of sometimes violent political protests against the previous government. However, there has been some tension in recent months as the junta has made clear it may not hold elections until 2017 and wants a constitution that will allow some type of emergency rule to take the place of an elected government.

Car bombs are almost unknown in Bangkok, but have been used in southern Thailand, where a Muslim separatist insurgency has been flaring for several years.

The last major bombings in Bangkok occurred on New Year's Eve at the end of 2006, when a series of bombs at celebrations around town killed at least three people and wounded dozens. Those bombings occurred just three months after a military coup ousted Prime Minister Thaksin Shinawatra, and there was speculation that his supporters carried out the attacks in revenge. However, the bombings were never solved.

The 2006 coup set off a battle for power among Thaksin's supporters and opponents, sometimes in the form of violent protests.

Protesters from both sides sometimes faced armed attacks by unknown groups, with more than 90 people killed in 2010 during pro-Thaksin demonstrations that were quashed by the army. The focus of the 2010 protests was the same intersection where Monday's blast took place, a bustling area in the heart of Bangkok's main shopping district. Several five-star hotels are nearby.

In March this year, several arrests were made in connection with a grenade that was tossed at Bangkok's Criminal Court. Those detained were apparently sympathizers of the pro-Thaksin Red Shirt movement. Critics of the current military government say some of the bombings may have been carried out by the junta to justify its continued suppression of basic rights and liberties. The government denied that.

In April, a car bomb exploded at a shopping mall on the resort island of Samui, injuring seven people. The motive was unclear, though the government suggested it was linked to politics.