More than 1,000 black activists released a statement reaffirming their “solidarity with the Palestinian struggle" 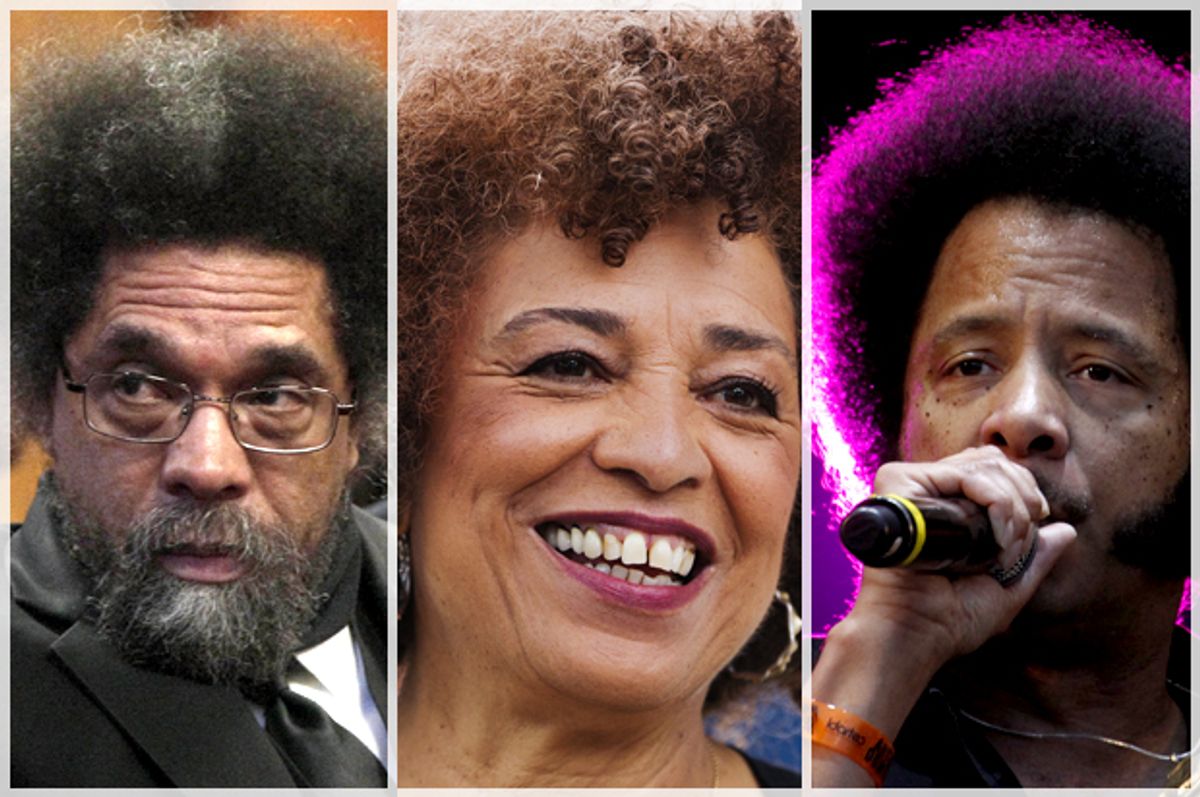 The actual distance between Ferguson, Missouri, and Gaza is about 6,000 miles. But last summer, the repressive and deadly violence visited upon blacks and Palestinians, respectively, made that distance seem to disappear. Immediately, lines of solidarity began to emerge between those groups, and in August a set of activists and organizations in Palestine issued this statement:

We the undersigned Palestinian individuals and groups express our solidarity with the family of Michael Brown, a young unarmed black man gunned down by police on August 9th in Ferguson, Missouri. We wish to express our support and solidarity with the people of Ferguson who have taken their struggle to the street, facing a militarized police occupation.

From all factions and sectors of our dislocated society, we send you our commitment to stand with you in your hour of pain and time of struggle against the oppression that continues to target our black brothers and sisters in nearly every aspect of their lives.

We understand your moral outrage. We empathize with your hurt and anger. We understand the impulse to rebel against the infrastructure of a racist capitalist system that systematically pushes you to the margins of humanity.

And we stand with you.

At the same time, I wrote an article in Salon that spelled out the similarities between the forms of oppression both groups live under, including dispossession from lands and homes; de facto forms of inequality; state violence; the constant interruption of daily life; and the ways the perpetrators of such violence are often immune from prosecution.

Nevertheless, such comparisons were criticized by some here in the U.S., and acts of solidarity were sometimes regarded with suspicion: In what ways might solidarity with Palestinians be harmful to black political projects here? Individual activists such as Angela Davis and Cornel West addressed that issue and spoke out on the need for black solidarity with the Palestinians.  As West put it:

In terms of the various kinds of Zionist critiques, we make it clear that this has absolutely nothing whatsoever to do with anti-Jewish hatred or anti-Jewish prejudice. This has to do with a moral and spiritual and political critique of occupation. Secondly, there is no doubt that Gaza is not just a “kind of” concentration camp, it is the hood on steroids. Now in the black community, located within the American empire, you do have forms of domination and subordination, forms of police surveillance and so forth, so that we are not making claims of identity, we are making claims of forms of domination that must be connected…. there is no doubt that for the Ferguson moment in America and the anti-occupation moment in the Israel-Palestinian struggle there is a very important connection to make and I think we should continue to make it.

But until today there has not been a mass statement of support from black activists and groups to echo the one issued by Palestinians last year. Now, in a historical event, well over 1,000 black activists, artists, scholars, students and organizations have released a comprehensive, carefully crafted and passionately intoned statement reaffirming their “solidarity with the Palestinian struggle and commitment to the liberation of Palestine’s land and people,” and supporting “freedom and equality for Palestinian people.” In this sweeping and momentous document, the signatories make a point of drawing out the historical connections between the issues of black and Palestinian freedom and rights, and the urgency of their present-day struggles, calling the fight for Palestinian liberation “a key matter of our time”:

On the anniversary of last summer’s Gaza massacre, in the 48th year of Israeli occupation, the 67th year of Palestinians’ ongoing Nakba (the Arabic word for Israel's ethnic cleansing)—and in the fourth century of Black oppression in the present-day United States—we, the undersigned Black activists, artists, scholars, writers, and political prisoners offer this letter of reaffirmed solidarity with the Palestinian struggle and commitment to the liberation of Palestine’s land and people.

The statement calls on the U.S. government to end diplomatic and economic aid to Israel, for black and U.S. institutions to support the Palestinian call for Boycott, Divestment, and Sanctions (BDS) against Israel until it complies with its obligations under international law, and for supporters of black and Palestinian liberation to target the private security company G4S for boycotts and divestment, as well as other companies doing business in the occupied territories.

Besides endorsing both academic and cultural boycotts (which in the U.S. is facilitated by the US Campaign for the Academic and Cultural Boycott of Israel), as well as divestment and sanctions, the statement makes emphatically clear the signatories’ commitment to the three goals of BDS and especially addresses the issue of Palestinian refugees:

Our support extends to those living under occupation and siege, Palestinian citizens of Israel, and the 7 million Palestinian refugees exiled in Jordan, Lebanon, Syria and Palestine. The refugees’ right to return to their homeland in present-day Israel is the most important aspect of justice for Palestinians.

As the two young organizers point out, this collaboration “represents a bridge between the current generation of Black activists and those who participated in the movements of the 1960s and 70s. Signatories include the Black Panther Party’s Minister of Culture Emory Douglas, former SNCC chairman Phil Hutchings, as well as Kwame Somburu and Emeritus Professor Charles E. Simmons. Hutchings, Somburu and Simmons were all signatories of a 1970 ad in The New York Times of Black activists and scholars in support of the Palestinian struggle against Zionism and the occupation.” Drawing upon these lines of affinity and extending the cause to the present day, the signatories add, “we also pressure our own Black political figures to finally take action on this issue.”

Statement co-organizer Khury Petersen-Smith said that justice for Palestinians is not simply limited to ending the occupation of the West Bank and Gaza Strip.

“The foundation of the Israeli state came through the ethnic cleansing of Palestinians, and every day since has involved oppression and violence toward the Palestinian population, both within and outside of Israel’s recognized borders,” Petersen-Smith said. “While there are differences between Israel and the U.S., we see parallels with a country that was founded on the enslavement of black people and where anti-black racism remains at the heart of U.S. society centuries later.”

I asked the two organizers of this effort how and why they got involved in this project, how they came to realize the connection between black struggles and those of the Palestinians.

Peterson-Smith replied, “The U.S. and Israel make the connections for us. The same urban police departments that harass, brutalize and murder black folks here train with Israeli law enforcement--who oppress Palestinians. The federal money that black neighborhoods in Baltimore, Detroit and every other city in the country needs and deserves is stolen from us by the government and invested in weapons for Israeli violence against Palestinians. So we are heartened to see activists making the connections of solidarity on our side, and we hope that the statement contributes to more solidarity.”

Kristian Davis Bailey put it this way, “Khury and I had each been involved in drafting different black statements on Palestine last summer that we found ourselves unable to publish during the heat of the attacks on Gaza. For the one-year anniversary--and after all the developments between Ferguson and Palestine--we decided to combine efforts for a new, bigger statement.” Bailey made a point of how receptive and enthusiastic those they approached for signatures were—there seems to be an organic sense of connection and solidarity:

It's been really important to communicate that the majority of Black people and organizations doing liberation work in the United States refuse to be silent on Palestine and support its liberation from Zionism and colonialism. People at the heart of grassroots community and liberation work - in places such as St. Louis, Detroit, Baltimore and Oakland--all view Palestine as a key issue of our time.

Most of the notable figures who signed on -- such as Angela Davis, Cornel West and the Dream Defenders -- did so almost immediately after we reached out. Talib Kweli signed within four hours of us emailing him.

One of the most inspiring parts of this statement was the strong response from political prisoners. We sent a mass letter to political prisoners through Prison Radio, and within a few days Mumia Abu-Jamal signed on. Some prisoners mailed in their responses to outside contacts. Liberation work in the U.S. must include and center on our own political prisoners. Their inclusion in this project is a testament to that principle.

I asked Bailey what they hoped this statement would accomplish; what was in their minds as they launched this historic effort?  He replied:

We hope this statement sends waves through the US and Israeli establishments that we won't tolerate anything less than full justice for Palestinians. Removing settlements, ending the occupation, and refugees' right of return aren't negotiating points -- they're mandated under international law and are prerequisites to Palestinian self-determination.

I hope we can move past exchanging statements into doing work within our communities to teach the histories and struggles of the other. I also hope we can facilitate consistent communication and mutual support between our movements.

Malcolm X, Martin Luther King Jr. and the Black Panther Party taught us that internationalism is a central part of our liberation here. This statement seeks to honor the legacy of black internationalism and the historic solidarity between black and Palestinian struggles as our movements enter a new chapter.

Finally, it is well worth remembering what Cornel West said in the interview mentioned above: “One can no longer say one is a serious progressive, let alone committed to moral integrity, without lifting one’s voice to call for an end to the Occupation of the Palestinian people.” One can equally say the same in terms of working for social, legal, economic, cultural, and political justice for blacks in the U.S.  And the call for both emphatically extends beyond the members of those two groups to all who are “committed to moral integrity.”  The statement reported on here should be a model for all those who wish to act in solidarity in these struggles.