The journalist speaks out against being erased from the N.W.A. story 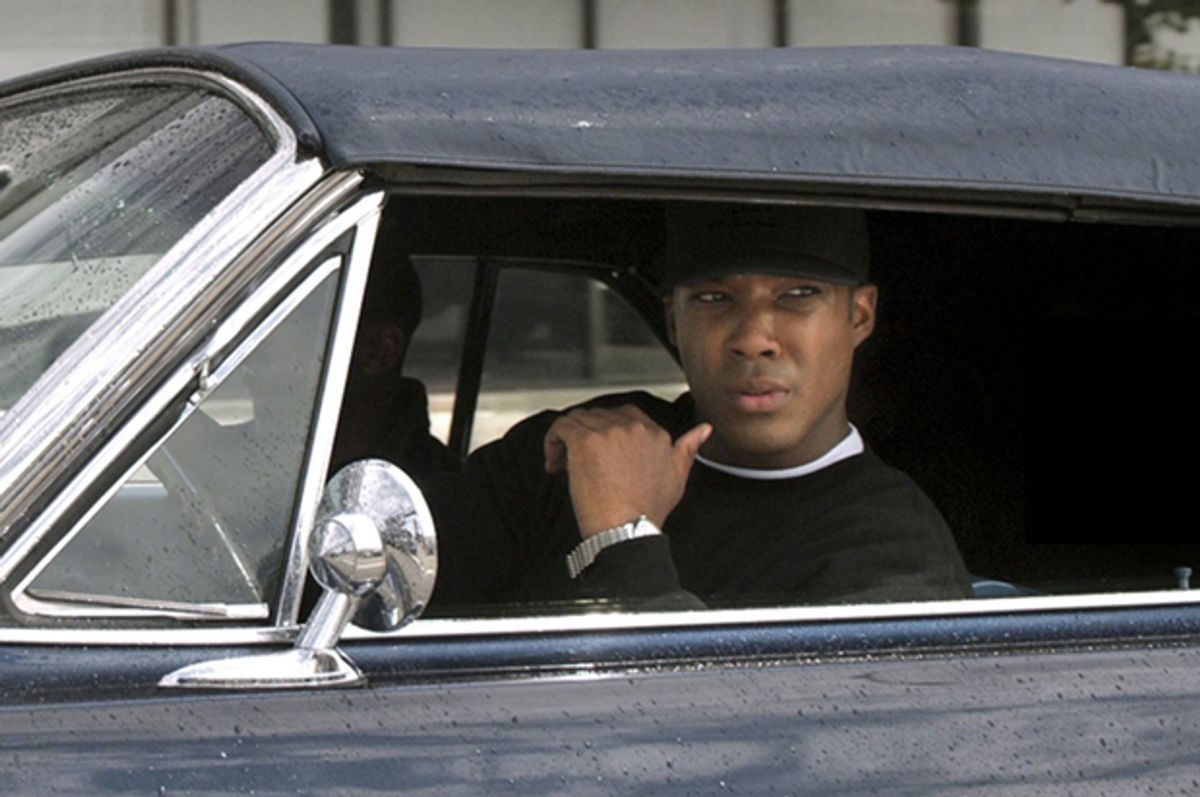 In a moving and detailed essay published today by Gawker, former "Pump It Up!" host Dee Barnes spoke up about her conspicuous absence from F. Gary Gray’s crowd-pleasing biopic about West Coast gangsta rap pioneers N.W.A. In "Here's What's Missing From Straight Outta Compton: Me and the Other Women Dr. Dre Beat Up," Barnes chronicles her time on the Los Angeles hip hop scene as she covered the rise of the game-changing group. A well-respected journalist and host of a popular hip hop TV show, Barnes had insider access, although once the music came out, she heard a different side of the musicians she had come to know:

I wasn’t in the studio to hear them record their disgusting, misogynistic views on women in songs like “A Bitch Iz a Bitch,” “Findum, Fuckum & Flee,” “One Less Bitch,” and perhaps most offensively, “She Swallowed It.” (On that track, MC Ren brags about violating at 14-year-old girl: “Oh shit it’s the preacher’s daughter! / And she’s only 14 and a ho / But the bitch sucks dick like a specialized pro.”) I heard the material like everybody else, when I was listening to the albums, and I was shocked. Maybe that was their point. Maybe they said a lot of that stuff for the shock value. There were always other girls around, like Michel’le and Rose, and we never heard them talk like that. We never heard them say, “Bitch, get over here and suck my dick.” In their minds, only certain women were “like that,” and I’ve never presented myself like that, so I never gave them a reason to call me names.

Then Barnes filmed a segment of "Pump It Up!" featuring Ice Cube, who had quit the group, insulting other members of N.W.A. while he was filming "Boyz N the Hood" — in perhaps the most telling detail, "Straight Outta Compton" director F. Gary Gray was her camera operator that day. She says after the clip aired, that was Andre "Dr. Dre" Young's motivation for "straddl[ing] me and beat[ing] me mercilessly on the floor of the women’s restroom at the Po Na Na Souk nightclub in 1991."

She describes Young's attack on her vividly: "I was on my back and [his] knee was in my chest" and "he smashed my head against the wall."

[W]hen Dre was trying to choke me on the floor of the women’s room in Po Na Na Souk, a thought flashed through my head: “Oh my god. He’s trying to kill me.” He had me trapped in that bathroom; he held the door closed with his leg. It was surreal. “Is this happening?” I thought.

In clear, reflective and empathetic prose, Barnes acknowledges the oppressive racism at the hands of police that galvanized N.W.A.'s "activistic core," but refuses to excuse the musicians when they channeled their frustrations into misogynistic language or violence: "There is a direct connection between the oppression of black men and the violence perpetrated by black men against black women. It is a cycle of victimization and reenactment of violence that is rooted in racism and perpetuated by patriarchy."

Young pleaded no contest to the criminal charge and settled a civil lawsuit from Barnes, which she says, contrary to popular belief which had her collecting millions, was for less than $1 million. And Barnes says ultimately, the fall-out was greater even than the migraines she continues to suffer: "I was blacklisted. Nobody wants to work with me. They don’t want to affect their relationship with Dre."

Read the entire essay at Gawker.