If all you know about Korean pop music is "Gagnam Style," you've been missing out 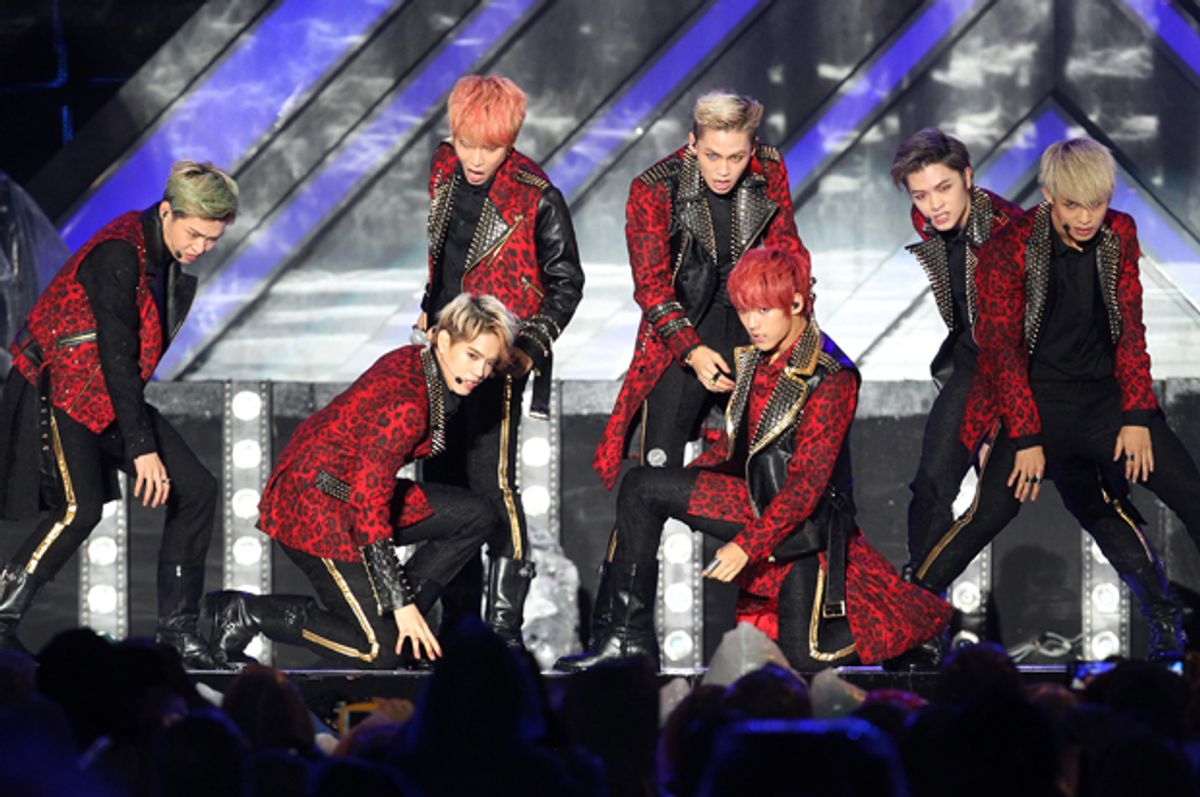 KCon is to Korean pop culture what ComicCon is to the Marvel Universe: a public lovefest for a subculture based on rabid fandom. And, for better or worse, that subculture is rapidly going mainstream. First held in 2012 in California, the numbers for KCon-LA ballooned so quickly that organizers decided to add KCon-NY earlier this month. “K-pop fans swoon at East Coast KCon,” the New York Times declared, observing that fans had been standing in line from the wee hours of the morning just to get a good place.

It’s not just teenagers like my niece going nuts over these acts. As I write this, a friend is using her frequent flyer points to get from Boston to Seoul just to see an exhibit curated by G-Dragon of the K-pop group “Big Bang.” Another friend who now lives in Paris and runs the expat mom-zine Les Lolos used to hate K-pop when it first surfaced around 15 years ago — too derivative of '90s American boy bands. But now, Maggie Kim says, the music machine has stepped up its game. “It’s fast and fun in a way that I think is currently lacking in Western music. It’s pure fizzy pop that’s manufactured perfectly. And god, all those girls and boys are gorgeous!”

Whereas K-pop artists are uniformly young, relentlessly upbeat, and (in the words of Derek Zoolander), “really, really, really ridiculously good looking,” pretty looks alone can’t account for the popularity of this baby-faced phenomenon. First K-pop showed up on “The Bachelor”; then Tyra Banks took “America’s Next Top Model: Guys & Girls,” to Seoul and featured K-pop groups BtoB (Born to Beat) and 2NE1 (Twenty One) on the 2014 runway final. American teens who’d never seen a K-pop act collectively let out a loud, surprised squee! After that point, KCon-NY was probably inevitable.

But nothing says success like being ripped off, and no less than Taylor Swift stands accused of having copied 2NE1’s monster hit “Come Back Home” for her own revenge anthem “Bad Blood.” One Twitter user commented: “‘Can we talk about how Taylor’s video isn’t original and was copied from a group of four women of color, 2NE1.”

Haters gonna hate, as Taylor also sings. I mean, doesn’t everybody know that K-pop copies American pop, so Taylor’s the one who got plagiarized--in the larger, philosophical sense, that is? Not really. The larger problem is that American pop has long whitewashed its debt to R&B, rap, hip-hop and the history of black music in general, so if we must talk about plagiarism, it starts way back with decades of erasure coming from white musical acts. The first performer to achieve international fame by appropriating black sound was Elvis Presley, whose records my Korean mother listened to rapturously while she was a teenager in Korea. When American soldiers came over during the Korean War (1950-53), they brought Elvis with them. She didn’t understand a word he was singing, let alone anything about race relations in the U.S. She was mostly worried about surviving. For her, listening to Elvis was pure girlish escapism.

So what’s happening now with K-pop is that it’s holding up a funhouse mirror to American cultural imperialism both foreign and domestic, while provoking reflection on the unexpected consequences of this country’s fraught military presence in Korea. In an email to me, writer Michelle Borok commented about the “weirdly hierarchical” organization of K-pop, with juniors and seniors “so weirdly plastic but pedestrian at the same time.” Her description not only applies to Korean business culture but American soldiers still wandering around the Itaewon bar district of Seoul, the rowdy and populist counterpoint to the sleek & chic district known as “Gangnam.”

To date, “Gangnam Style” by the outlier act Psy remains the only music video to reach 2 billion views on YouTube, yet it’s sung in Korean and has exactly one word in English: “style.” Mirroring the impact of Elvis in 1950s Korea, Psy is a certified 21st century global phenomenon, and his popularity is prompting a global craze for all things Korean. In an email to me, writer Christine DCastillo observed that she recently found herself behind a group of American teens on the sidewalks of Cambridge, Massachusetts. None of them were Korean, yet they were “throwing around words they learned from K-dramas.” How come she recognized the words? It’s because she watches K-dramas too — they’re downloadable by the dozens on Netflix and Hulu.

At the University of Sydney, Australia, professor Jane Park, author of "Yellow Future: Oriental Style in Hollywood Cinema," is currently researching  the globalization of South Korean film, television and music through remakes and crossovers. Regarding K-pop stars, she notes in an email to me: “their artistic authenticity is already under question more than African-American artists or say, traditional Korean musicians who play gayageum [a traditional Korean stringed instrument].” Earlier generations of K-pop artists, including Rain and BoA (Beat of Angels, the "Queen of Korean pop"), she notes, were all criticized for being too imitative. For Park, however, this critique now has more to do with a stereotypical notion that Asians lack “authentic, individual selves like their western/American counterparts.” So, she says, all of the things that Confucian culture celebrates, including filial duty and sense of teamwork (epitomized in the tightly synchronized movements and polished, borderline campy look of K-Pop stars), as well as softer kinds of masculinity that are “new,” she says, “to South Korea but coming out of a pastiche of representations of masculinity in East Asian pop culture like bishonen,” routinely get mistranslated in the U.S., chalked up to a lack of artistry and skillful copying.

Ironically, the comforting predictability of K-pop may now be a keystone of its success. The musicians all have an air of fresh-faced wholesomeness. The precisely synchronized dancing is likewise free of twerking, grinding, gyrating and other forms of overt sexiness. The routines have a certain retro flair, as if the choreography came from an Elvis film mashed up with the Rockettes. You’d think that its earnest call to fizzy fun would be a giant turn-off for sophisticated teenagers, but no. In a recent interview, legendary director John Waters commented that he just refilmed his subversive masterpiece "Pink Flamingos," but scrubbed it clean of every transgression and removed all the “dirty words.” Why? It was the “only radical thing he could thing of doing.” When anything goes and porn is the norm, being chak han, innocent, scans as a form of rebelliousness.

If nothing else, the growth of KCon is further confirmation of what reporter Euny Hong described in "The Birth of Korean Cool: How One Nation Is Conquering the World Through Pop Culture." Hong’s description of Psy summarizes the contradictions of contemporary Korea in general: “Who else could combine Confucianism and farting?” The new world, in a nutshell.