The destructive lie of American zoos: How we've blinded ourselves to the truths of the natural world 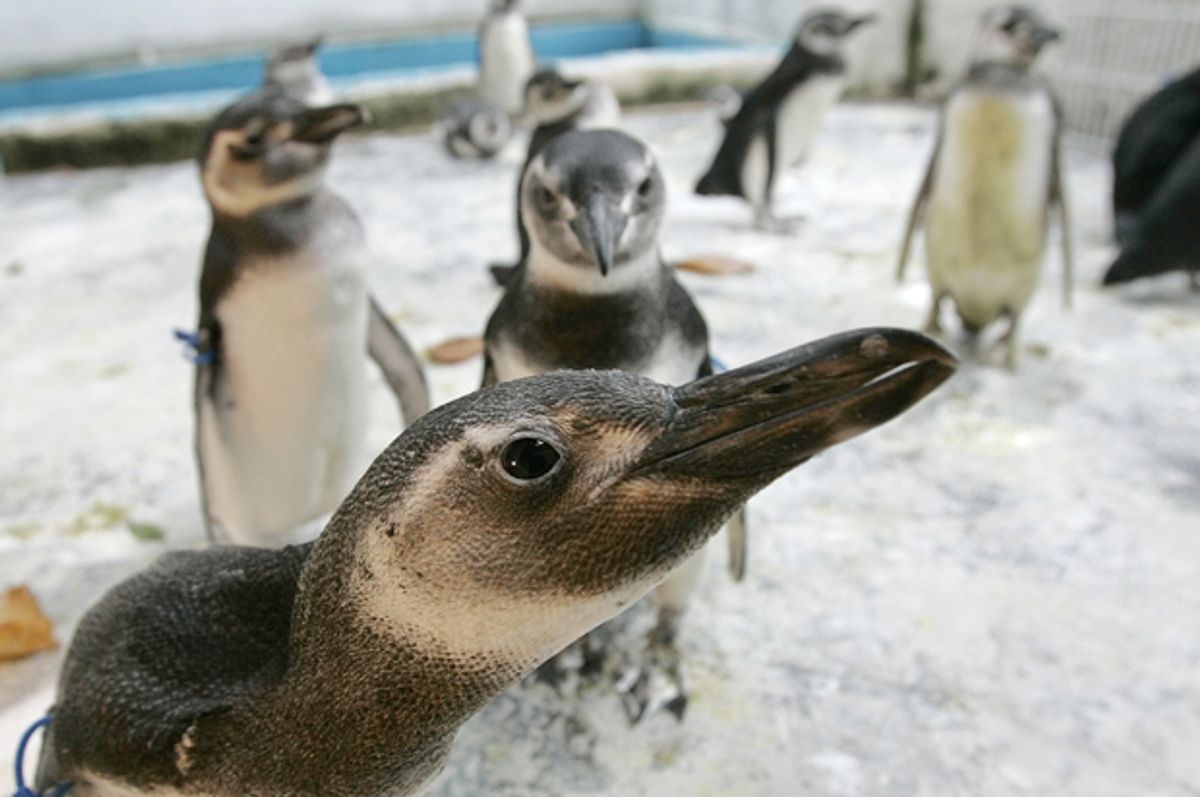 Stepping onto the remote Martillo Island in Argentina’s Tierra del Fuego, my first impression was that the penguins I had come to visit seemed elated not to be in a zoo. Penguins who encounter humans don’t generally have the luxury of being at home for the rendezvous.

I don’t think they minded my being there. Our group of 20 was quiet and carefully respectful as we moved through their terrain, gushing with unbridled awe, which I feel pretty sure these birds noticed and appreciated. We followed the rules and stayed on the paths. The penguins sometimes wandered onto the paths, too. I very nearly stepped on a chick who scampered underfoot. Mortified, I jumped back immediately; the baby seemed OK.

I could have visited penguins very conveniently at the sleek popular aquarium right down the street from my office in Atlanta, and the $38.95 admission price, while exorbitant, would have been thousands of dollars cheaper than what it cost to fly to the bottom of Argentina (“fin del mundo” as signs reminded us copiously and unnecessarily).

But I don’t go to zoos or aquariums, so I rarely see such spectacularly fascinating animals. When I do meet them, though, I have experiences that are as memorable as they are infrequent. My once-in-a-lifetime hour-long adventure in the penguins’ world was incomparably more intense than the rote zoo outings I remember before I stopped patronizing them.

While I’ve always loved to see amazing animals, I’ve come to regard zoo visits as consumer experiences that do little more than celebrate people’s power to capture and display a parade of exotic specimens in a mall-like compound. Step in line, take a number to see the polar bears, second door to your left; Komodo dragons on the mezzanine. Exit through the gift shop.

There might have been some nominal similarities between the South American colony’s thousands of penguins (mostly Magellenic and Gentoo) and the few dozen African penguins loitering in the Georgia Aquarium’s gen pop. But there are fundamental disparities between the caged and the free-ranging penguins, the latter of whom live where they are meant to live, far away (from me) in a region of incredible sky, space, mountains, wind, water – everything that constitutes the essence of their world, and that is so wholly absent from the aquarium’s dark, cramped, unnatural architectural compound.

What is most striking about the indoor, on-display penguins is how un-penguined they have become: denuded of their worlds, their lives. If I had to suffer the deprivations that they do in captivity, I’d be more dead than alive.

I’ve met kangaroos in Australia, camels in Jordan, sloths in Costa Rica, elk in Montana -- all in nature, where they belong. (Does it sounds pretentious to say “I’ve met” rather than “I’ve seen”? I hope not: it feels like an accurate account of what happened.) I gave up on zoos when I outgrew field trips and birthday parties, and since then I haven’t seen giraffes, hippos, lemurs, bears or tigers. Maybe I will meet lemurs, at some point, if I manage to make it to where they live, and maybe I won’t, in which case, I won’t. I’ll survive (and so will they).

Visiting the penguins at the end of the world, I was mesmerized by their vividly noisy and busy activities: honking and strutting, cuddling their babies on their feet, burrowing into their rookeries, stretching and preening their flippers, molting, resting, ducking (penguining?) into the water for food. Two or three King penguins stuck out like royalist toffs among the hundreds of plebes whom they seemed to regard as their subjects.

There were so many of them – it was a community of penguins, a world of penguins, an ecosystem of penguins that surrounded me, as opposed to what an aquarium presents: a specimen, a sample of penguin. Even if there’s more than one penguin on display, it’s not much more: a few, or even a few dozen, fail to give any meaningful sense of what a real penguin colony is like. In zoos, signs might explain that penguins are highly social animals, but such information is a profoundly paltry approximation of actually being in their society.

After my encounter I can only begin to scratch the surface in my attempt to understand who penguins are and how they live, but I can begin to scratch the surface. Zoos and aquariums claim to offer visitors the chance to see and connect with other species, but all they provide is the opportunity to ogle caged otherness, and to feel superior to all the exotic wild animals whose exoticism and wildness their captors have stripped away in the service of “edutainment,” commerce, voyeurism and ultimately anthropocentrism – the ideology that construes human beings as the most important living creatures. (But we aren’t: Ecology is a complex web of interconnection, not a hierarchy.)

Zoos flatter patrons by implying that we are situated at the pinnacle of a Great Chain of Being, masters of all we survey. Look at all the biological bounty, like imperial booty, captured and put on display for all comers to enjoy. Spectators move from cage to cage, while the captive animals, who would normally move across an expanse enormously larger than we ourselves do in our daily routines, instead endure intrusively penetrating stares while constrained in a space that’s one percent, or one one-hundredth of one percent, the size of their natural range.

It is as if, perversely, animal power is a zero-sum game, and human animals are somehow stronger for having stripped away the power of all the other animals we have immobilized.

I realize that I need to interrogate the privilege that allows me to undertake in situ animal-experiencing. I am indeed very privileged. And I know, too, that there are significant carbon costs and other externalities of ecotourism, though I think these are offset by the economic advantages reaped by the human societies that abut these breathtaking animal habitats. From the web-of-life perspective, ecotourism can be a good way for people to share in (and benefit from) the magnificence of the other animals who naturally live near them. Reasonable people may disagree on the ethics of ecotourism – whether the rarity of my privilege undercuts my conviction that going to see marvelous animals in their own environment is the proper way to interact with them.

But I feel vindicated whenever I have traveled to their worlds, confident that these authentic human-animal interactions are intellectually and spiritually momentous, akin to E. O. Wilson’s idea of “biophilia”: our need to nurture bonds between ourselves and other living species.

It was difficult to get to Tierra del Fuego, while at the aquarium I could buy a membership and see penguins every week. But I don’t think people who live in Atlanta are meant to see penguins constantly: I think we’re meant to see them maybe once in our lives, or maybe, quite possibly, not at all. Such rarity of penguin-seeing renders them considerably more potent, and inspiring, in our imagination than the contrived and exploitative familiarity of seeing them on demand.

I hope that appreciating incredible (distant) penguins, rather than conceiving them as humdrum-cute creatures who are always there, pacing in their tiny enclosures whenever we pop in on them, will induce us to think more deeply about how we live with them and what we need to do to facilitate the best possible terms of interspecies cohabitation. (Short answer: recycle, take it easy on the overconsumption, and try to help stem the warming and melting.)

This overarching ecological interrogation should be our primary concern when we encounter other animals: how do we relate to each other in the network of life? How do we share the earth?

In Tierra del Fuego, I was humbled by the sense of how lucky and how honored I was to be there as the penguins’ guest, and how careful I had to be not to mess up their world, both while I was there and also after I returned home.

“Habitat preservation” has become, appropriately, the predominant ecological teaching point for alleviating the widespread endangerment of other animals. But how can zoo spectators appreciate the value of animals’ habitats by gawking through glass or cages at specimens that have been ripped out of their habitats and resituated in downtown Atlanta?

A trip to meet other animals on their own turf reminds us how vital it is, if we are to be informed and responsible ecological citizens, to know these animals as they are, and to resist the ubiquitous impulse to frame them in ways that conform to our own (demonstrably dysfunctional) cultural habits. The real power and beauty of animals such as the South American penguins I visited is precisely that they are so very far away from us and our world, literally and figuratively, ecologically and culturally.

Randy Malamud is Regents’ Professor of English at Georgia State University. He is the author of the forthcoming Intellect book "The Importance of Elsewhere: The Globalist Humanist Tourist" from which this essay is adapted.