The GOP plot to destroy "birthright citizenship": Everything you need to know about Trump & Walker's hideous plans

Anti-immigrant hysteria reaches a fever pitch in the Republican Party, which now takes aim at the 14th amendment 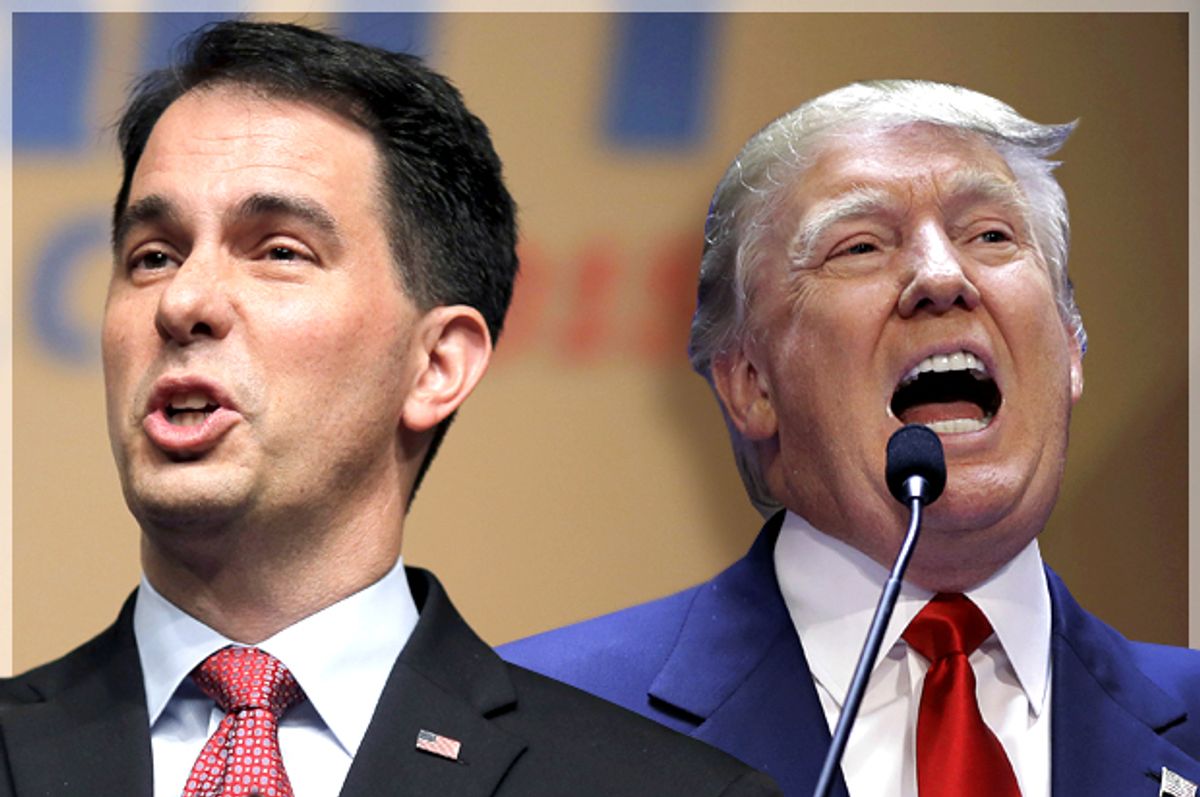 Back when he was considered by all the smart people to be the frontrunner for the Republican nomination, Governor Scott Walker made a huge gaffe when he told Glenn Beck that he was not only repudiating his previous tepid support for a path to citizenship for undocumented workers, but that he now believed even legal immigration should be curbed.

Rumor had it that his comment was so upsetting to the Koch brothers that they were rethinking their impending endorsement. They subsequently announced another set of auditions with their billionaire friends for later in the summer. (Those auditions were held just this month, and featured Walker, Marco Rubio, Jeb Bush, Ted Cruz and Carly Fiorina. Walker didn't seem to be much of a factor in that meeting, and his poll numbers are going nowhere fast.)

When Walker made his comments, many in the GOP were shocked and objected strenuously. Sen. Orrin Hatch called it "poppycock" and Sen. Rob Portman of Ohio said "we want legal immigration...it's enriched our country immeasurably. It’s who we are. It’s the fabric of our success.”

That was in April of this year and what a difference four months makes. The new GOP frontrunner, Donald Trump, has made immigration the centerpiece of his campaign, and curbing legal immigration, a policy he endorses, is only one of several highly controversial policies he's proposed in his recently released "immigration plan." He is also for deportation of all undocumented workers and plans to repeal "birthright" citizenship, which would require a constitutional amendment. That's in addition to banning transfers of money to Mexico and raising fees on travel in order to blackmail the Mexican government into building a wall at the border. The legality of all these proposals is questionable, but that hasn't deterred Trump's many fans from applauding his initiative. Among those fans is Ann Coulter, who went so far as to declare it "the greatest political document since the Magna Carta."

That's where we found ourselves yesterday, when Walker rushed to the microphone to reiterate his earlier endorsement of draconian immigration laws and ensure that everyone knew he had been there first. Walker is on board with the repeal of birthright citizenship as well, which is unsurprising since his immigration guru is the same senator who's been advising Trump -- the Chairman of the Judiciary Subcommittee on Immigration, Border Security, and Refugees, Alabama Senator Jeff Sessions.

Sessions has been flogging the repeal of birthright citizenship since at least 2010, when he was quoted saying:

"I'm not sure exactly what the drafters of the (14th) amendment had in mind, but I doubt it was that somebody could fly in from Brazil and have a child and fly back home with that child, and that child is forever an American citizen."

Sessions is a former judge so he's been to law school and knows very well what the drafters of the 14th Amendment had in mind. It was adopted in the wake of the Civil War in order to ensure that people like Jeff Sessions and states like Alabama would not be able to deny citizenship, due process and equal protection under the law to former slaves and immigrants.

Ever since then, people like Jeff Sessions and states like Alabama have been trying to find ways to circumvent the spirit and letter of the Amendment.

Back in 1986, Ronald Reagan nominated Sessions to the federal bench, but he ran into a snag in the Senate when four DOJ lawyers testified that, as U.S. Attorney, Sessions had a bit of a problem with racism: He had told people that the NAACP and the ACLU were un-American, communist organizations, which had "forced civil rights down the throats of people." He also said that he wished he didn't have to prosecute civil rights cases at all. He became only the second nominee in 48 years whose nomination was killed by the Senate Judiciary Committee.

However, he got the last laugh in 1996, when he won a seat in the Senate for himself, and eventually landed on that very same Judiciary Committee, with many of same senators who had thwarted his dream of a federal judgeship.

Perhaps Sessions greatest revenge came last term, when he helped lead the crusade against President Obama's nominee to head the civil rights division of the DOJ, Debo Adegbile, arguing Adegbile couldn't be trusted because he once represented a client convicted of the 1981 murder of a police officer. In one of the most smug and sanctimonious comments in the history of the Senate, Sessions declared that his opposition was based upon the fact that the civil rights division "must protect the civil rights of all Americans" and not be used as a tool to further the political agenda of "special interest groups."

Chutzpah doesn't begin to describe it.

But all of that is fairly standard Southern-conservative behavior. Some people will never stop fighting the Civil War. Where Sessions is really making his impact on the future is on immigration policy.

Last January, he put together a policy paper called "The Immigration Handbook for the New Republican Majority," which forms the basis for Trump and Walker's plans and will likely influence the rest of the candidates' platforms as well.

This is his cri de guerre:

We need make no apology in rejecting an extreme policy of sustained mass immigration, which the public repudiates and which the best economic evidence tells us undermines wage growth and economic mobility. Here again, the dialect operates in reverse: the “hardliners” are those who refuse even the most modest immigration controls on the heels of four decades of large-scale immigration flows (both legal and illegal), and increased pressures on working families.

Conservativism is by its nature at odds with the extreme, the untested, the ahistorical.

The last large-scale flow of legal immigration (from approximately 1880–1920) was followed by a sustained slowdown that allowed wages to rise, assimilation to occur, and the middle class to emerge.

What he doesn't mention is that the "slowdown" was largely due to three separate periods of large scale expulsion of Mexicans and Mexican Americans. President Warren Harding ran on a platform in 1920 that included deportations, and he was a good as his word, overseeing the round up and removal of tens of thousands of people. (The KKK became involved shortly thereafter and flew the anti-immigrant banner proudly for the next 50 years.)

From 1929 to 1936, during the worst of the Great Depression, the government forcefully deported vast numbers of Mexicans and scared many more into leaving voluntarily. In 2005, the State of California passed an official "Apology Act" to those people forced to relocate to Mexico during this period, many of whom were Americans.

In the mid 1950s, the Eisenhower administration famously enacted "Operation Wetback," which was yet another round-up and deportation program. This one was famous for snatching working people with no opportunity to tell family or collect their property, transporting them to distant destinations in Mexico -- simply dumping them there with no money or prospects. Sometimes they were left in the desert to die.

So when Sessions talks about being opposed to the "ahistorical" nature of immigration reform, he's basically saying that these past actions were all good and he thinks we should do it again. His "handbook" offers political rhetoric and messaging which tells voters that their economic ills are caused by immigrants. It does not, however, offer any details about implementation of his plans, and neither does Trump's -- nor, in all likelihood, will Walker's forthcoming plan, either.

They will all say "it's a matter of will," and shake their fists in self-righteous defense of the American worker being deprived of his and her fair chance to work as a strawberry picker or a restaurant dishwasher. They will claim that undocumented workers are living on easy street, collecting welfare and health care when they aren't "droppin' babies" (as Lindsay Graham colorfully put it) to secure American citizenship.

No matter how distorted and dishonest these talking points are, a good number of Americans are always willing to believe them. Hopefully we have evolved beyond the point where we will allow the government to do anything like this again, however:

His father and oldest sister were farming sugar beets in the fields of Hamilton, Mont., and his mother was cooking tortillas when 6-year-old Ignacio Piña saw plainclothes authorities burst into his home.

"They came in with guns and told us to get out," recalls Piña, 81, a retired railroad worker in Bakersfield, Calif., of the 1931 raid. "They didn't let us take anything," not even a trunk that held birth certificates proving that he and his five siblings were U.S.-born citizens.

The family was thrown into a jail for 10 days before being sent by train to Mexico. Piña says he spent 16 years of "pure hell" there before acquiring papers of his Utah birth and returning to the USA.

If Jeff Sessions has his way, that will never happen again, but not because he thinks it's wrong to deport immigrants. That would be perfectly fine. No, he would make sure those kids could never return to the U.S. because they wouldn't be allowed to be American citizens in the first place.

When Trump unveiled his plan this week, Sessions was ecstatic. He said, "This is exactly the plan America needs. Not only would the plan outlined in this paper work, but more quickly than many realize." And he'll undoubtedly say the same thing when Scott Walker unveils his immigration plan too. Why wouldn't he? They're following the Sessions "Immigration Handbook" to the letter.