Behind Trump's assault on birthright citizenship: The far right's dream of rolling back the Constitution, and reshaping America

Trump's new plan aligns the GOP rebel with the Ann Coulter loony fringe, who long to roll back 150 years of history 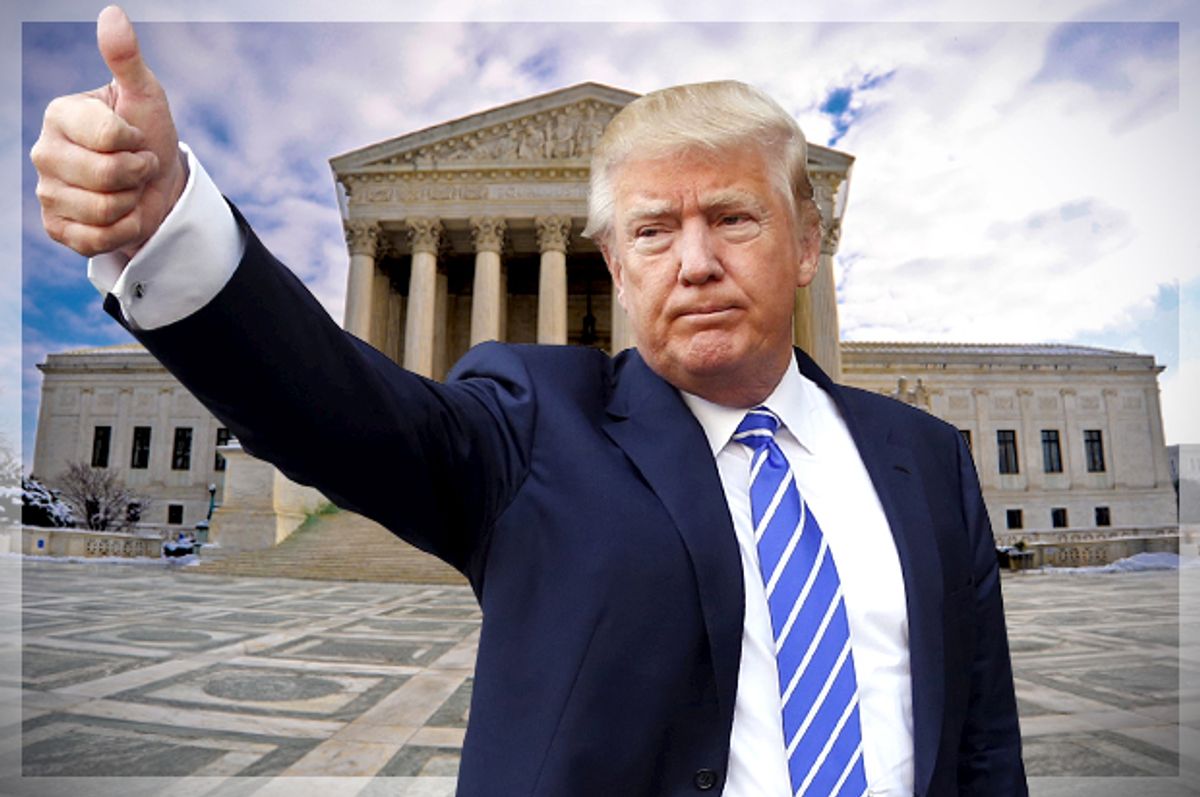 So Donald Trump wants to end “birthright citizenship,” meaning the long-standing principle that virtually everyone born in the United States is a citizen, irrespective of who their parents are or where they came from. We can get back to the legal and constitutional issues later, which are murkier than they appear on the surface. The short version is that most of the stuff people have written about this issue over the last day or two is overly simplistic, and nobody is quite sure whether changing the birthright law would require a constitutional amendment, a Supreme Court decision or just an especially devious act of Congress.

Undoing the birthright law is a long-cherished dream of extreme right-wing constitutional fundamentalists, not so much on its own terms as because it opens up the possibility of walking back a whole bunch of long-accepted constitutional law that lacks a basis in Sacred Scripture (as they see it). But before we get to the paranoid fever dreams of those who would abolish the income tax and strip-mine Yellowstone, let’s begin with what really matters. When it comes to Donald Trump and the endlessly entertaining 2016 Republican campaign, that of course is the blood sport and the showmanship. How will the rest of the GOP field contort itself in response to the Donald’s Jedi mind tricks, and how will this affect the right-wing commentariat’s BDSM love-hate relationship with Trumpmania?

Well, Scott Walker and Bobby Jindal, embracing their new role as the lovable puppies begging for scraps in the sawdust beneath Lord Trump’s table, have rushed to assure us that they were against birthright citizenship even before they heard Their Master’s Voice. As Heather Digby Parton recently observed, Walker has even tested out the position of being against legal immigration too, an attempt to out-Trump Trump that may have put Walker on the outs with the Koch brothers. I have repeatedly argued that progressives underestimate the political brilliance of the Koch strategy, but the fact that the brothers put so many of their chips on that guy somewhat undermines that argument.

Desperate GOP candidates with literally nothing to lose are forcing themselves to board this old-new bandwagon – can we call them the Anti-Birthers? Despite sorta, kinda running as a sensible Republican moderate, Lindsey Graham has endorsed ending birthright citizenship, but without committing himself to any specific plan. Chris Christie, who positioned himself as squishy-soft on immigration when his principal workplace was Trenton, New Jersey (Latino population around 35 percent), sounded a forceful maybe, telling talk-show host Laura Ingraham that the birthright law “may have made sense at some point in our history, but right now we need to re-look at all that.” What we all admire about Christie is that he’s a straight shooter who tells it like it is, am I right?

Much of what’s going on here is just obvious, dumb politics. Trump has surged to the front of the GOP campaign, and stayed there, largely on his promises of impossible, draconian, Darth Vader-like “solutions” to the immigration problem, which appeal to the most infantile side of the American nature. We haven’t had anything close to a real national debate on the birthright law, but whenever it comes up as a polling question around half the respondents favor scrapping it, and it’s safe to assume that proportion is much higher among conservatives. Changing the rules about who gets to be a citizen sounds more practical and reasonable, on the face of things, than Trump’s proposals to deport pretty much anyone he wants, including U.S. citizens whose parents are undocumented, and to coerce Mexico into building a 75-foot-tall radioactive wall out of titanium mined on the moons of Jupiter.

Speaking of one-note joke candidates whose only purpose is to elicit lustful cooing noises from the mainstream media: No need to pay those expensive strategists, Carly Fiorina! I’ll tell you exactly what to say: “I really respect Donald Trump for the energy he has brought to this campaign and the issues he has raised, which have touched real people and their lives. I think we need to take a long, hard look at this issue and figure out what makes sense for America going forward.” But once we get past the panicked underwear changes among the entire Republican field, and the sad, strange spectacle of forgotten frontrunner Jeb Bush drifting across the American heartland like a lost Thanksgiving Day Parade float, we reach the fact that Trump has blundered (perhaps unknowingly) into questions of constitutional law that sets hearts racing among a certain class of far-right eggheads.

Ann Coulter has embraced Trump’s immigration plan as “the greatest political document since the Magna Carta,” which is a high point in conserva-trollery even by her exalted standards. Coulter is a buffoon, to be sure, but a buffoon with a constituency and a purpose. She represents a strain of ultramontane reactionary delirium that would love to find a mechanism, up to and including fascist dictatorship, by which virtually every aspect of contemporary American society can be undone but we still have a country that is officially called the United States of America. Of course Coulter is against feminism and #BlackLivesMatter and marriage equality and nonwhite immigration, but that’s only the beginning. She’s against soccer, a "fruity sport" that is spreading “moral decay” in America (as are "Girls," and Beyoncé). She wants to bring back the poll tax and deprive women of the vote – well, except for “pretty girls,” who are all Republicans.

How do we get back to a soccer-free America dominated by Christian white men and pretty girls? I mean, short of the aforementioned fascist coup or the society of Margaret Atwood's "Handmaid's Tale," we can't. But it’s fair to say that’s the social vision that drives Coulter’s clowning and also drives the thinking of a core group of far-right legal scholars, who see birthright citizenship as a wedge issue that can be used to unwind more than a century of accepted constitutional law. Essentially, if we are free to go back after 140-odd years and decide that the 14th Amendment does not, in fact, confer automatic citizenship on everyone born in the U.S., then all sorts of newly narrowed re-readings of the Constitution become possible. Does the federal government really have the authority to demand a national income tax? Can it enforce environmental regulations on private businesses and landowners? Were the “states’ rights” questions apparently settled by the Civil War merely crushed by federal tyranny, as neo-Confederates argue to this day?

On the birthright citizenship issue, as Trump has no doubt been informed by his newly ecstatic far-right allies, the counterrevolutionaries almost have a point. It’s not a point that is likely to carry the day in legal terms, and it’s a point that requires ignoring or finessing a Supreme Court decision that appeared to settle the issue once and for all. But by the standards of right-wing termite attacks on constitutional rights, it’s pretty good. Here’s what the 14th Amendment says about the nature of American citizenship: “All persons born or naturalized in the United States, and subject to the jurisdiction thereof, are citizens of the United States and of the State wherein they reside.” That part about the jurisdiction of the United States caused confusion from the very beginning, and as with the Obama truthers and the "natural born citizen" clause, today’s right-wing legal scholars argue that it doesn't mean what you think it means, and that the children of undocumented immigrants don't necessarily qualify.

Sounds far-fetched, I know. If you’re born somewhere, you’re subject to its laws, right? The end. That wording was clearly intended to exempt the children of foreign diplomats and visiting heads of state -- but the right-wingers correctly observe that for the first 30 years or so after the amendment was enacted, nobody was quite sure whether it applied to the American-born children of non-citizens. President Andrew Johnson said it did, but in 1873 the Attorney General said it didn’t. Right-wing constitutional attorney Ken Klukowski offers this eloquent Breitbart summary of the anti-birther case, which has spread widely on conservative social media. For some reason, Klukowski fails to mention the 1898 Supreme Court decision in the case of Wong Kim Ark, a man who had been born in San Francisco to Chinese parents and was subsequently denied re-entry to the U.S. after a trip abroad.

In point of fact, the Wong case only reached the Supreme Court after an anti-immigrant San Francisco attorney named George Collins, pretty much the Klukowski of his day, convinced federal prosecutors to appeal a lower court ruling in Wong’s favor. Collins hoped to establish the principle that American citizenship was conferred by jus sanguinis, or inherited from one’s parents, as was generally the case in Europe. This backfired, even in the era of the Chinese Exclusion Act, an overtly racist piece of proto-Trumpian legislation that effectively froze the Chinese-American population for 60 years. By a 6-2 decision (with one abstention), the high court ruled that Wong had been a U.S. citizen from birth under the terms of the 14th Amendment. That concept of jus soil, citizenship conferred by place of birth, has never been seriously challenged since.

Even in the disturbing Philip K. Dick universe where Donald Trump is actually elected president – and I don’t dispute that our universe resembles that one more and more with every passing day – he could not undo birthright citizenship without, at the very least, convincing Congress to pass a law that defies the jus soil principle and then convincing the current Supreme Court to revisit its 117-year-old decision in the Wong case. That’s an exceedingly unlikely sequence of events, but given that Antonin Scalia, Clarence Thomas and Samuel Alito sit on the court in our semi-real universe, we can’t entirely rule it out.

But it isn’t this specific issue that troubles me. Vowing to rip up the citizenship laws and close down the border is a time-honored tactic to rally the nativist yahoos, an endlessly durable demographic in American politics. No matter what Walker and Jindal and Christie and the rest of the Republican passel of hogs may say in public, they know it ain’t happening. For one thing, the Koch brothers and other GOP swineherds don’t want any of that, because illegal immigration is a central driving force in the low-wage, low-security economy they favor. At least for the moment, Trump’s wildcat campaign has blown past those guys and forged an accidental alliance with the stealth ideological termites determined to chew through what’s left of the Constitution and hollow out contemporary American society until it collapses. Of all the unmistakable signs of the end times in this delirious year, that might be the scariest.