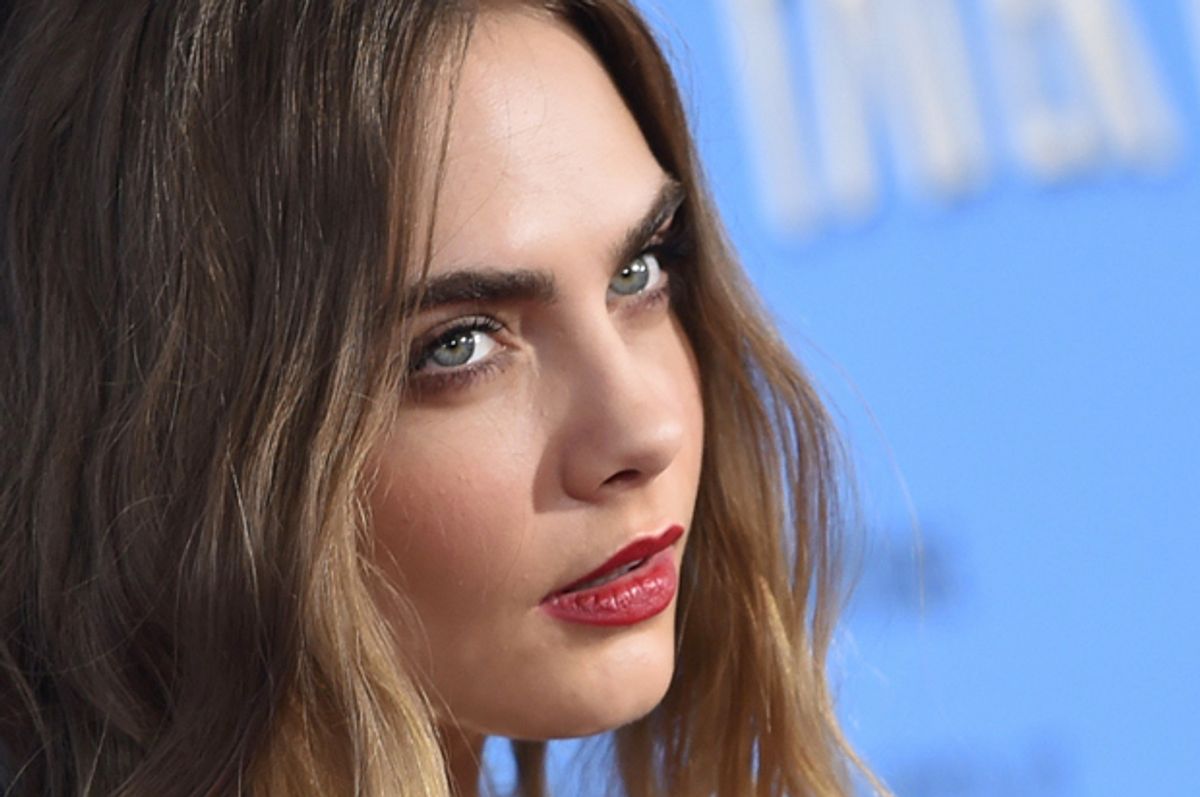 You can regard this is as either a depressing affirmation of all the worst ideas you probably already have about the fashion industry, or you can optimistically choose to believe that maybe this is a sign — this time for real — that something's got to change.

In a recent interview with the London Times, "Paper Towns" star and genetic jackpot winning model Cara Delevingne spoke out about just how toxic the fashion industry has been to her. "I am a bit of a feminist and it makes me feel sick," she says. She developed stress-related psoriasis and said that her reactions to the pressures of her work were "a mental thing as well because if you hate yourself and your body and the way you look, it just gets worse and worse.”

And when she recalls the pressure she felt to pose provocatively while still in her teens, she declares, "It’s horrible and it’s disgusting. [We’re talking about] young girls. You start when you are really young and you do, you get subjected to …not great stuff." She claims the industry "didn't make me grow at all as a human being. And I kind of forgot how young I was. I felt so old." And she says that while she's already experienced sexual harassment in her new career as an actress, it's still "worse in modeling."

Delevingne's comments echoed those of Miley Cyrus, who also talked this month about her experience as a very young person in a very punishing profession, telling Marie Claire, "I was told for so long what a girl is supposed to be from being on that show. I was made to look like someone that I wasn't, which probably caused some body dysmorphia because I had been made pretty every day for so long, and then when I wasn't on that show, it was like, Who the f__k am I?… When you look at retouched, perfect photos, you feel like sh_t."

And if you look at any high fashion magazine or ad campaign, like Vera Wang's of earlier this year that featured a rail thin woman with legs that redefined the thigh gap, you'd have to say that the industry's ideal of beauty has become massively warped.

In a blistering feature for the Guardian two years ago, former Australian Vogue editor Kirstie Clements admitted, "There was a period in the last three years when some of the girls on the runways were so young and thin, and the shoes they were modeling so high, it actually seemed barbaric." And she recalled that "When a model who was getting good work in Australia starved herself down two sizes in order to be cast in the overseas shows – the first step to an international career – we would say in the office that she'd become 'Paris thin.'"

But other things seem to be improving. Spurred by Clements' frustration with the industry, three years ago, nineteen Vogue editors around the world pledged to "not knowingly work with models under the age of 16 or who appear to have an eating disorder." Since 2012, Vogue cover models have included a broad range of body types, including icons like Adele, Lena Dunham, Serena Williams and Kim Kardashian. Earlier this year, the UK banned an Yves Saint Laurent ad because her ribs were so prominent and her legs "looked very thin." And France, meanwhile, joined Israel, Spain and Italy in issuing a ban on ultra thin models "whose Body Mass Index (BMI) is lower than levels proposed by health authorities and decreed by the ministers of health and labor." Agencies that violate the edict can face penalties and jail time. Starvation: Not actually a good look.

Conversely, larger sized models like Ashley Graham have been stepping into the spotlight, and retailers — though certainly not the haute couture level — have begun heeding the demand for realistically sized clothing.

We come in all sizes — including tall and thin. But when the pendulum swings to an extreme, it becomes unsustainable. And with tough, smart women like Delevingne calling out the damaging standards imposed on young and vulnerable girls and consumers demanding more diversity, it may finally be getting better. The message is clear — the definition of beauty doesn't have to be so painfully narrow.