The terrifying unanswered questions of the Ashley Madison hack

It's easy to mock the unlucky philanderers whose information was exposed. But we're in uncharted territory now 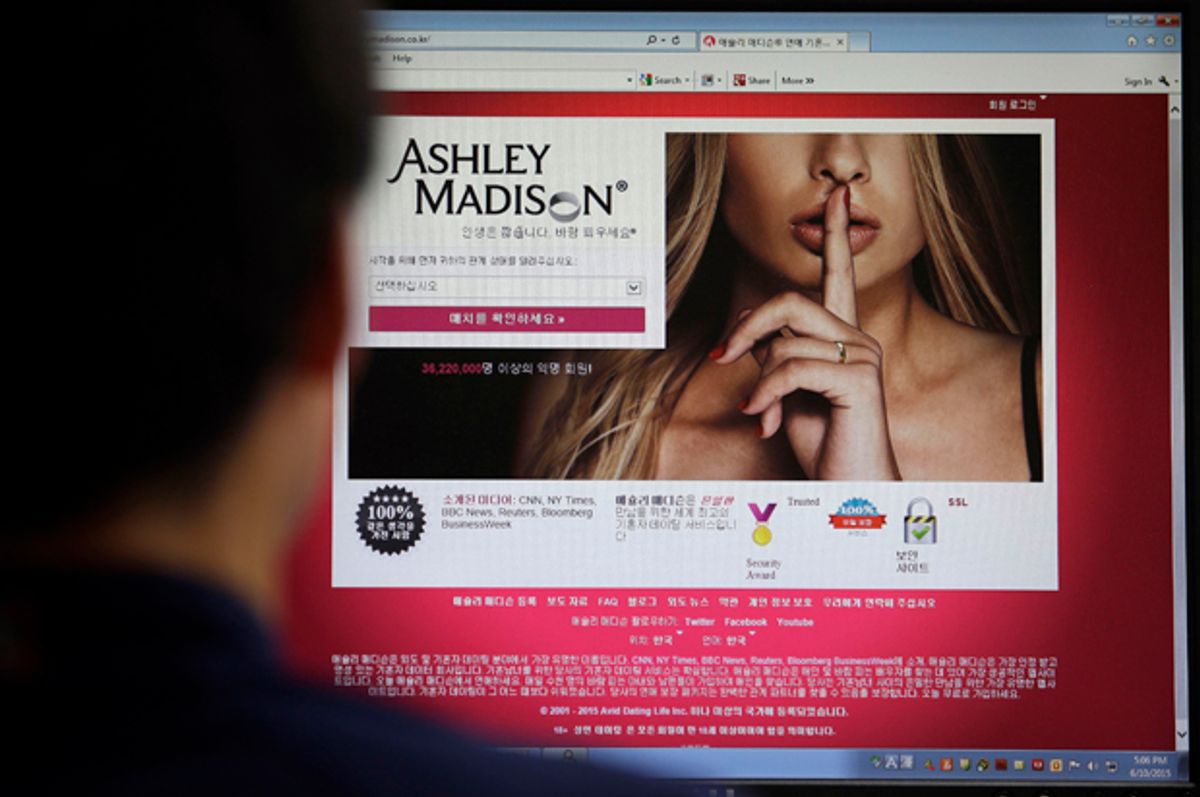 My bank cards keep getting hacked. It feels like every six months or so, I'll get a call or an email and my bank will tell me that my card has been "compromised." One time, someone used my card to pay a gas bill in Kentucky. I think another time it was some place in Texas. The last couple of times, the bank hasn't even told me what the specific problem was—just that some unknown entity reached into my account and tried to steal my money.

My response has mostly been to shrug my shoulders and get on with my life. I always get the money back, so it's no harm done, I suppose. The fact that my bank account—which, last I checked, was pretty important to me!—gets broken into all the time has not been especially troubling to me. I know I'm not alone in feeling this way. Everyone's had to deal with their card getting hacked. It's just the way things are now.

If I'd turned up in 1995 and told everyone that, two decades later, we would all regard such repeated assaults on our finances as a relatively trivial inconvenience, I'd have been thrown into a padded cell. But it's the truth. As a society, we have decided that the pleasures and conveniences of technology far outweigh the risks inherent in handing over vast quantities of private information to mostly unaccountable entities. We live in a world where entering your Social Security number into some random website's form is treated with the same level of introspection as giving your name when you're ordering takeout.

Essentially, we've all decided we don't really care—or that it's too difficult to do anything about it—and there's been little to change that feeling. The Edward Snowden revelations were hugely significant, but they didn't make us alter our behavior very much. (My own biggest response was to put a piece of tape over my computer's built-in camera.) The hacking of Target and Sony didn't give anybody much pause either.

The news that hackers have released a gigantic trove of data from the servers of infidelity enthusiasts Ashley Madison provides us with another chance to see how we really feel about this brave new world of ours. It's easy to laugh off this particular hack—the users of a super-skeezy website whose motto is "Life is short. Have an affair" do not immediately elicit sympathy—but that would be a mistake. Feeling untroubled about such a massive breach of privacy is as misguided as thinking that government surveillance is only a problem if you've "done something wrong." The point isn't the morality of the players; it's our loss of control over our lives. We can't function without the internet, so does everyone's tolerance of privacy invasion mean that the standards around our expectation of privacy have been lowered?

The hack raises all sorts of questions for the media. Should journalists comb through the files to see if there are any public figures in there? It was mostly defensible when they looked through the Sony files after they'd been dumped online, but what about something this personal? Some organizations are already posting about some of the revelations. Even though I can see a public interest defense of this, is this the kind of world we want to live in? If the media shows that hackers will be rewarded in this way, how will that impact future invasions of privacy?

News outlets have to do some work on answering these questions, because they're not going away. Hacking is the present and the future. For one, our governments are hacking us around the clock. Activists are likely to respond in kind, seeking to use hacking as a form of civil disobedience. What are reporters to do when one of those activists brings them information gleaned through such activity? What about when corporations are the target? What's a tabloid going to do when a hacker uncovers hidden evidence that a celebrity's been cheating?

And that's just one side of the equation. It's easy to foresee a situation when some unsavory hackers target journalists too. Reporters could find themselves blackmailed or threatened. What's a news organization going to do in that case?

There are obviously no easy answers to any of this. The media should not be in the business of suppressing information, but everybody has lines that they draw. Where are the lines now? It seems clear that nobody has the faintest clue, but both the media and the broader public are going to have to try and figure this stuff out. Today, it's Ashley Madison. Tomorrow, it's us. What are we going to do?