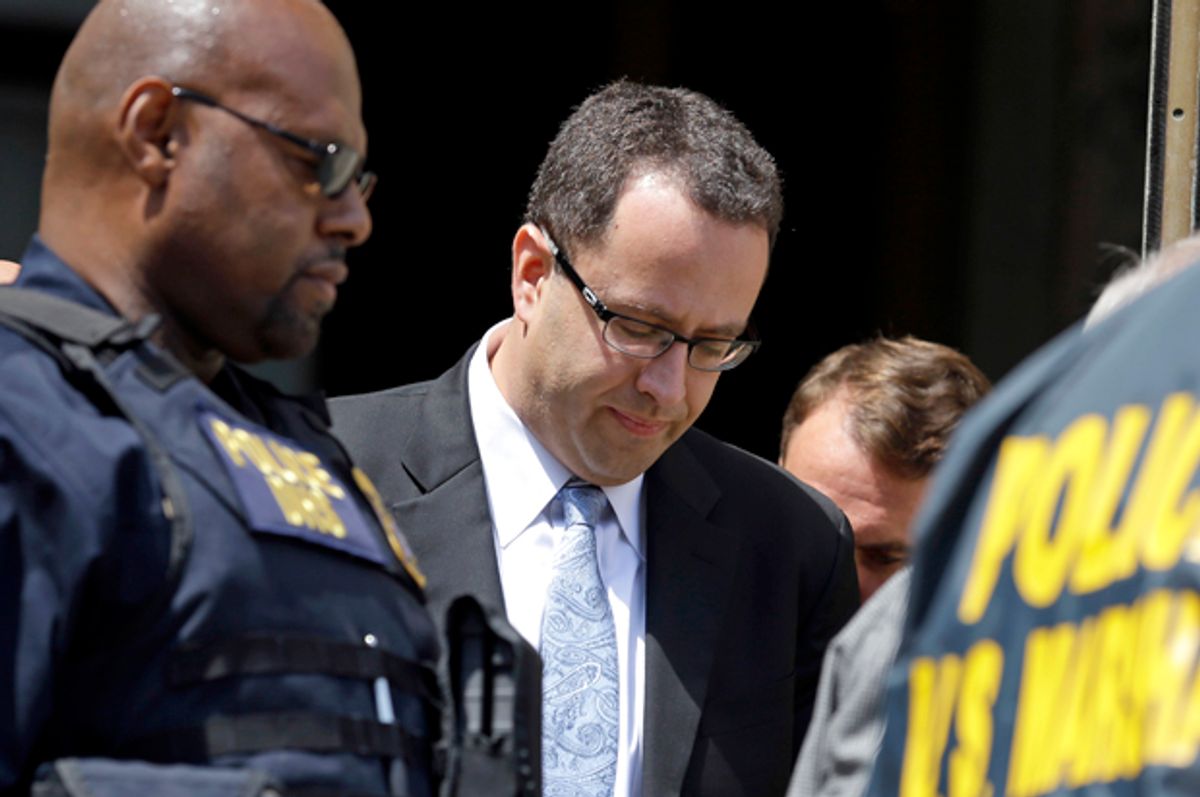 I promise you this — you are not going to make the world a better place with your prison rape joke. You are not. I further promise that you can be entirely appalled by a story involving involving the sexual abuse of children and still not resort to gags about dropping the soap. And perhaps someday the idea that rape is not a hilarious feat of karmic comeuppance will be so widely accepted that we won't need to keep saying this. Not today, though.

Because if anyone's going to throw appropriateness to the wind, it'll be the New York Post, the Murdoch tabloid on Thursday ran a cover image of former Subway pitchman admitted sex offender Jared Fogle with the headline: "Enjoy a foot long in jail." They're not talking about hoagies. Why, I have not witnessed such hilarity since the heyday of the Jerry Sandusky story. They were more shower-based, but you get the gist.

For years, Fogle served as the pitchman for Subway, thanks to a dramatic weight loss he credited in part to a diet featuring the company's sandwiches. But his relationship with the company ended last month when authorities raided his home. And then this week, Fogle's attorneys announced his intention to plead guilty to paying for sex with two minors. He reportedly requested, "The younger the girl, the better" when he solicited them. He also pleaded guilty to possession of materials in which "minors depicted in these images or videos were under the age of 18 years, including minors as young as approximately 13-14 years." It's estimated he will serve between five and twelve years in prison for his crimes, and then live out his life as a registered sex offender. It's a disgusting, chilling story. The idea that he now deserves to be raped, and that that's funny, is pretty gross too.

The prison rape joke is an offensive if incredibly durable cliché. Earlier this year, it formed the pretty much the whole basis for a Will Ferrell and Kevin Hart movie, in which alleged white collar criminal Ferrell tries to pre-empt a violation during his upcoming incarceration. In 2012's "Hit & Run," ex-con Bradley Cooper admits "I got [bleeped] in prison," prompting a slew of gags about the race of his abuser. This is revolting. It's revolting on many levels. It's revolting because it suggests that rape is an acceptable — if not officially sanctioned — form of justice. It's revolting because it presents rape as the ultimate emasculating humiliation. Raped in prison? LOL that's so gay! It's revolting not because any topic is too awful to joke about, but because it's not funny.

Many of us understand this. On a 2014 episode of "Last Week Tonight with John Oliver," the host introduced a montage of prison rape jokes in popular culture, lamenting that "It's so easy not to care about prisoners. It's so easy not to care that we are really comfortable making jokes about one of the most horrible things that could happen to them. We are somehow collectively able to laugh about references to the fact that four percent of prisoners reported being sexually victimized in the past year. One in 25." As Steven W. Thrasher wrote in the Guardian this past spring, that's around 200,000 individuals over the past few years. Just last month, President Obama spoke out about prison reform, and noted pointedly, "We should not be tolerating rape in prison, and we shouldn’t be making jokes about it in our popular culture. That is no joke. These things are unacceptable." But until we stop laughing about it, how can we stop tolerating it?