The death of birthright citizenship: How Donald Trump is taking a fringe idea into the mainstream

"The Donald" wants to destroy one of the U.S.'s greatest achievements — and more and more GOPers are ready to help 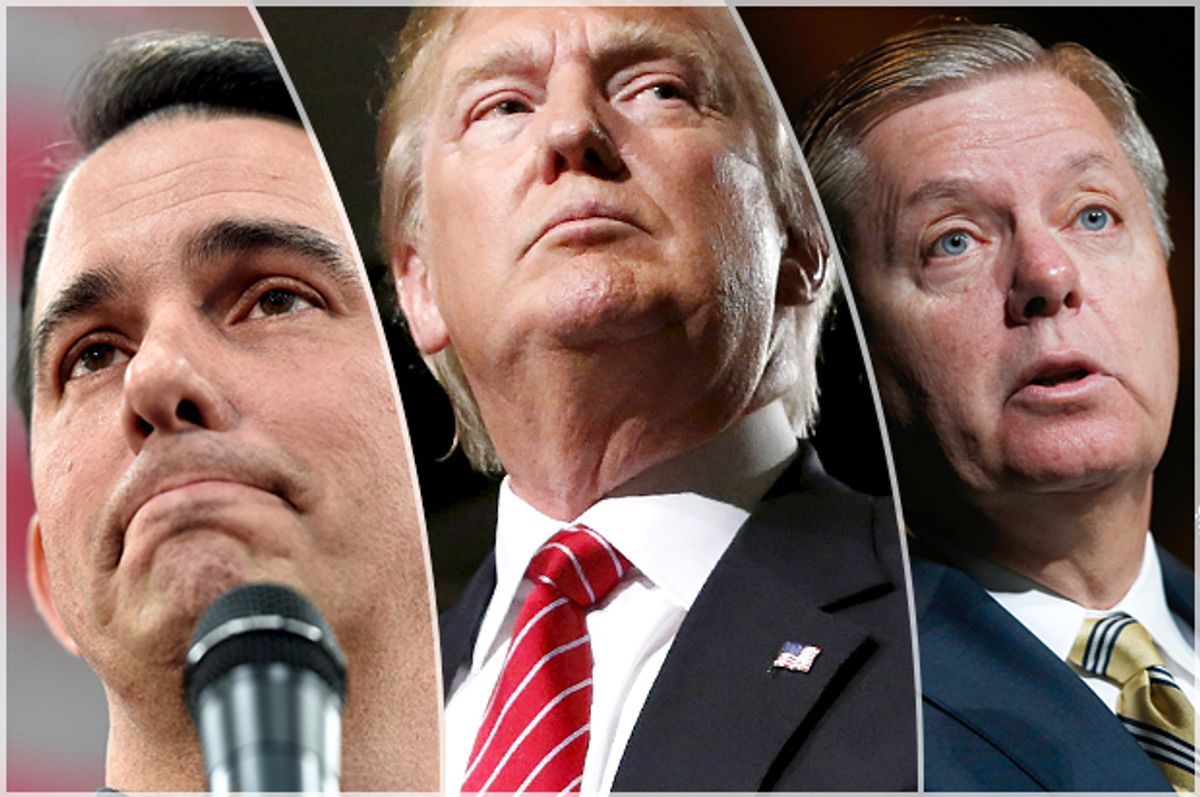 Here’s something the New Republic’s Brian Beutler wrote a few days ago about Donald Trump, the man whose unusually resilient presidential campaign has dominated the GOP primary and kept the media entertained during this long, hot and relatively uneventful summer. It concerns the way Trump’s influence over the party is beginning to seep beyond the stylistic and into the substantive. And if I were a Republican who was at least familiar with reality, and who very much wanted my party to win the White House in 2016, it would have me in a state of anxiety and dread.

For the first time since he joined the race several weeks ago, Trump has laid out a comprehensive policy approach—perhaps the most nativist, antagonistic, right wing immigration plan any leading Republican has ever proposed—and it’s earning rave reviews and approving nods from conservatives and other candidates. Trump isn’t just shaping Republican rhetoric and antics anymore. He’s starting to shape Republican policy as well.

Trump’s “comprehensive” immigration policy, which you can read here, is indeed as draconian and performative in its hostility as Beutler claims. Taken altogether, its provisions, according to Slate’s Jamelle Bouie, add up to a de facto embrace of “self-deportation” — the concept, which is popular on the far right, that undocumented immigrants will leave the country so long as public policy makes staying sufficiently intolerable. That means more immigration enforcement officers (with more power, too); more and heavier fines on those who overstay their visas; the defunding of so-called sanctuary cities; and the implementation of a nationwide form of “e-verify.”

What’s most remarkable about Trump’s vision, however — and this is the part that should make those hypothetical reality-residing GOPers nervous — is what it holds for “birthright citizenship,” one of the key elements of the 14th Amendment. Trump’s a little fuzzy on the details, but the basic gist of his approach to the long-standing practice of granting American citizenship to anyone born on American soil is quite clear. He would end it. For the first time in well more than a century, U.S. citizenship wouldn’t be determined by geography, but rather blood.

As the Washington Post’s Greg Sargent noted in an interview with the esteemed historian of the Civil War and Reconstruction Eric Foner, this fringe idea’s being brought into the mainstream by a Republican is bitterly ironic. The 14th Amendment, Foner told Sargent, is “one of the historic achievements of the Republican Party.” It was the Radical Republicans’ way of not only overturning Dred Scott — which held that African-Americans were “so far inferior that they had no rights which the white man was bound to respect” — but also solidifying the 13th Amendment banning slavery. And it has a much farther-reaching, ideological significance, too.

Here’s how Foner describes the view of Americanness that is embedded in the idea of birthright citizenship, and which Trump’s entire candidacy implicitly rejects (my emphasis):

The Civil War and the emancipation of the slaves shaped the Republican Party and pushed it in the direction of nationalism, inclusiveness, and openness. The idea was that citizenship should be extended to people regardless of accidental characteristics, such as race, national origin, or the status of their parents. This established a national standard for citizenship. The principle was one of opportunity and inclusiveness … It’s a statement about what America is. It’s a place where anybody can become a citizen regardless of their parents, religion, or race.

It’s that last part — that view of Americanism as having to do with ideas and values, not ethnicity and tribe — which makes the 14th Amendment such a beautiful, inspiring contribution to not just American history but human history. For anyone trying to argue that the U.S.’s claim to be a beacon of enlightenment, liberty and equality is more than good branding, the 14th Amendment is crucial evidence. For anyone looking to prove that the U.S. has the capacity to overcome the obsession with “accidental characteristics” that so often turned Europe into a slaughterhouse, birthright citizenship is essential.

But, of course, the reasons why forward-thinking Americans have cherished birthright citizenship, and why Trump and his followers wish to end it, are one and the same. They’re the same reasons why demagogues like Sarah Palin (of whom Trump is a big fan) talk about “real Americans,” as if the criteria for “real” Americanness went beyond citizenship and extended into the mystical realm of blood and soil. If your perspective is fundamentally ethno-nationalist — if your vision of what America “really” is requires the political and cultural hegemony of white Christians — then birthright citizenship is an affront to an almost natural order. It’s the worst form of being politically correct.

It should go without saying that this is nasty and potentially dangerous stuff, and that adhering to such a definition of citizenship would make the kind of robust pluralism American society requires impossible. And yet what is so remarkable about the Trump phenomenon is that despite its being so normatively toxic — and, in an increasingly non-white electorate, politically stupid — Trump’s campaign against birthright citizenship is finding eager volunteers among his fellow Republican candidates for president. Trump has long been a carnival barker. Now he is a pied piper, leading the GOP off a cliff.

Louisiana Gov. Bobby Jindal, for example, who is himself a beneficiary of the 14th Amendment, recently (and incoherently) tweeted that “We need to end birthright citizenship for illegal immigrants.” Jindal long ago abandoned whatever interest he held in saving the GOP from becoming the “stupid party.” But as bad as hyping false and Islamophobic fears of “no-go zones” in Europe may have been, at least that was an attempt to use other people in faraway countries to fear-monger his way to the White House. By going after birthright citizenship, Jindal has decided to demonize closer to home.

Even more tellingly, Wisconsin Gov. Scott Walker, who is a much more likely nominee than Jindal, has also come out against the 14th Amendment. “I think that’s something we should [do] — yeah, absolutely, going forward,” he recently said in Iowa. “[T]o me, it’s about enforcing the laws in this country,” he added, incoherently. A Walker aide recently told the Times that the campaign’s hope is to gobble up Trump’s supporters after his inevitable (in their eyes) collapse.  And considering Walker is already on record as ambivalent about legal immigration, you have to figure he’s got a pretty good shot.

But if you’re searching for a sign of just how rapidly the GOP is sprinting to the fringe on immigration — with Trump at the head of the pack — look no further than South Carolina Sen. Lindsey Graham. The long-shot candidate and über-hawk was once considered something of a moderate on the issue, and it was only a few weeks ago that he was lambasting Trump for his comments about immigrants, which he said would “kill” the GOP. But in 2010, Graham, worried about losing to a primary challenger on his right, announced his opposition to birthright citizenship. Now he wants credit for having been saying so “for a long time.”

By this point, it should be clear that the vein of xenophobia, authoritarianism, ethno-nationalism and rage that Trump has tapped into among the GOP faithful was there before he started running for president. So no one should fool themselves into thinking the party’s problems in this regard would disappear if Trump gave up. Still, while “the Donald” is not the source of the illness, he is making it worse. And if he’s influential enough to be setting the tone for the rest of the party on something as fundamental as the 14th Amendment, there’s little reason to think his grip on the Republican Party will slacken any time soon.