Donald Trump's campaign of terror: How a billionaire channeled his authoritarian rage — and soared to the top of the polls

Democrats have been having a good laugh at Trump's expense this summer. Here's why we shouldn't be laughing 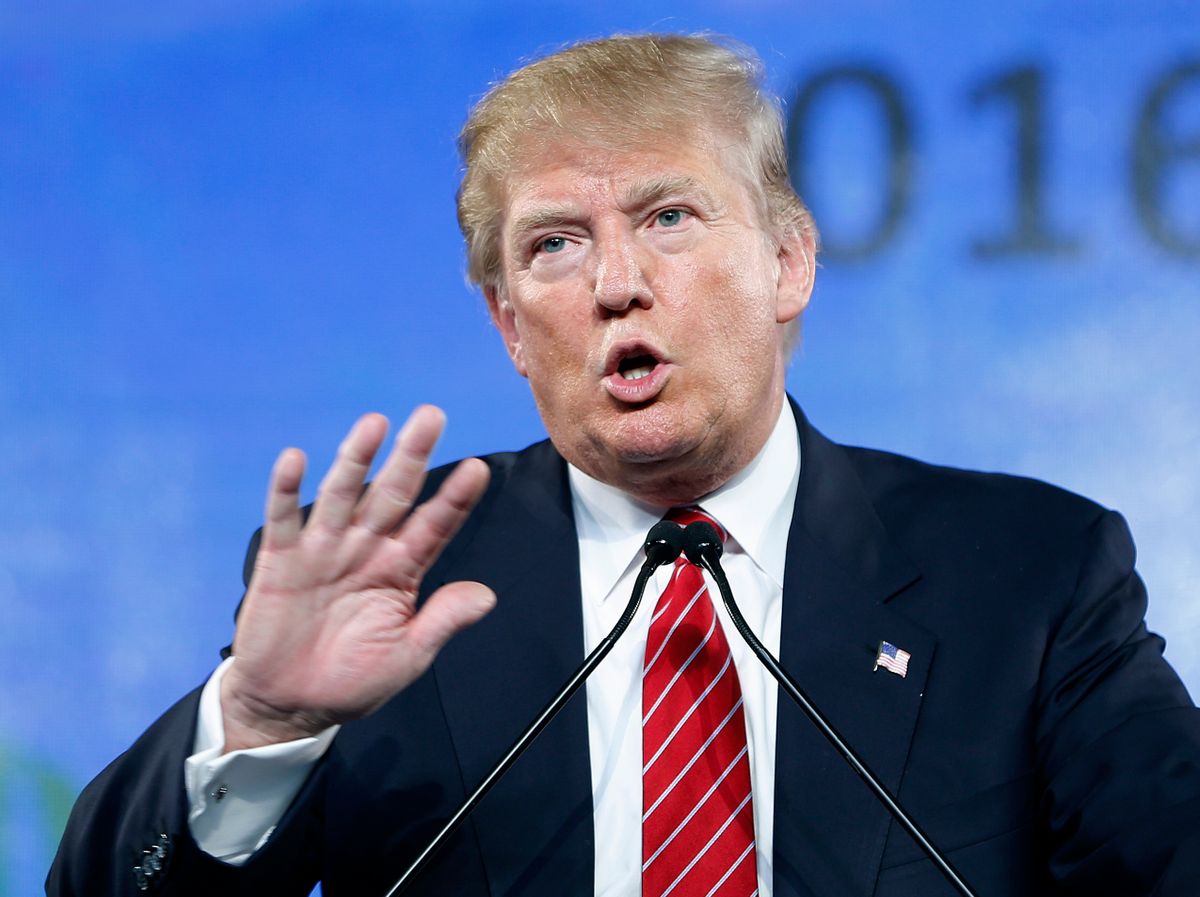 In this July 11, 2015, photo, Republican presidential candidate Donald Trump speaks at FreedomFest in Las Vegas. In a state where early organization is key to a successful presidential campaign, Trumps New Hampshire operation has the trappings of a legitimate political organization. (AP Photo/John Locher) (AP)
--

Ever since The Donald descended that escalator at Trump Tower a couple of months ago to announce his entry into the presidential race, Democrats have been laughing. Watching the Republicans squirm and Fox News jump through hoops has made the GOP presidential primary a delightful entertainment for their rivals on the other side of the aisle. I don't know how many of them had it in them to watch the whole Trump Town hall extravaganza in Derry, NH, on Wednesday -- but those who did were unlikely to be laughing by the end of it.

There was the standard braggadocio and egomania that characterizes his every appearance and weird digressions into arcane discussions of things like building materials (for The Wall, naturally.) He complained about the press and politicians and declared himself superior to pretty much everyone on earth. But after you listen to him for a while, you come away from that performance with a very unpleasant sense that something rather sinister is at the heart of the Trump phenomenon.

Trump was still talking when Chris Hayes opened his show that night with this comment:

I want to talk about what we are seeing unfold here because I think what we are seeing is past the point of a clown show or a parody. I believe it is much more serious and much darker...You have someone now who is getting huge crowds, who is polling at the top of the GOP field, who polls show is beating Jeb Bush by 44 to 12 percent on the issue of immigration, going around the country calling little children, newborn babies, anchor babies saying that he's going to use that term which I find a dehumanizing and disgusting term. Talking about giving the local police the ability to "do whatever they need to do to round up" the "illegals". Building a wall, talking about basically chasing 11 million people out, talking about deporting American citizens to "keep families together", talking about what would essentially be the largest most intrusive police state in the history of the American republic to go about this task, that is the person that is right now at the head of the Republican party's presidential contest.

And the delirious crowd applauded all those those things just as they loudly cheered this reference to Bowe Bergdahl, the American soldier held by the Taliban for more than five years:

"We get a traitor like Berghdal, a dirty rotten traitor, who by the way when he deserted, six young beautiful people were killed trying to find him. And you don't even  hear about him anymore.  Somebody said the other day, well, he had some psychological problems. 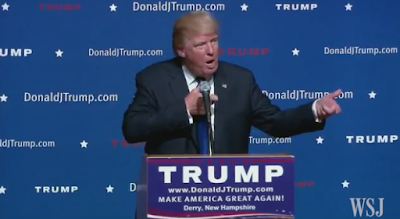 Trump repeatedly paints a picture of America in decline -- weak, impotent and powerless, in terrible danger of losing everything unless we get a leader who will cast off all this "political correctness," this effete insistence on following the rules. He promises to "make America great again" by cracking down on the "bad people" and being very, very strong.

When talking about Iraq, he characterized the the Iraqi people as cowards, "running whenever the bullets are flying." He said "the enemy has our best equipment, we have the old stuff"  and that the country is a mess because of all the "years of fighting unsuccessfully -- because of the way we fight." (The implication is that we didn't take the gloves off.) He said, "the problem is that as a country we don't have victories anymore. When was the last time we had a victory?" And he declared, "I believe in the military and military strength more strongly than anybody running by a factor of a billion... We are gonna make our military so strong and so powerful and so incredible, so strong that nobody's gonna mess with us, folks, nobody. And we don't have that right now." This garnered huge cheers from the crowd.

On economics, it's all about other countries taking advantage of the US.  He said, "They're up here, we're down there. I don't blame China or Mexico or Japan. Their leaders are smarter and sharper and more cunning -- and that's an important word, cunning -- than our leaders. Our leaders are babies...our country is falling apart." He explains the problem:

China is killing us. They've taken so much of our wealth. They've taken our jobs. They've taken our business, they've taken our manufacturing, [audience member screams out "our land"] Our land? The way they're going they'll have that pretty soon.Think about it, we have rebuilt China --- somebody said to me "that's a harsh statement"  --- it's the greatest theft in the history of the United States.  Now I have great respect for China and their leaders.  The largest bank in the world is from China. They're a tenant of one of my buildings. I love China I think it's great.  But we don't have the people that know what they're doing so ... they're killing us. You know what that is? They call it a sucking action. They're sucking the jobs and the money right out of our country.That's what they're doing. We've rebuilt China. They have bridges, they have airports so do other countries and we're like a third world country...They're taking our jobs, they're taking our money.They take our jobs they take everything and we owe them money. How does that happen? It's magic.  That's not gonna happen with Donald Trump.

If a person feels as if this country isn't what it used to be, that they've lost their place, that their future isn't promising, Donald Trump is telling them right up front that foreigners are to blame. It isn't the government being unwilling to collect taxes from people like Donald Trump so we can build infrastructure -- we're rebuilding China instead of our own country. It isn't that we spend vast sums of money to maintain the world's only superpower military, it's that people from other countries are stealing us blind. And Trump will fight all these foreigners to take our country back from them wherever they are.

Of course, there is no foreigner who is wrecking this once great country more than the undocumented immigrant and he plans to cleanse our culture of their evil influence:

...we have crime all over the country, we have ... the borders, the southern border is a disaster...The other night a 66 year old woman, a veteran, raped sodomized, brutally killed by an illegal immigrant. We gotta stop we gotta take back our country. We've gotta take it back! [huge applause]

I love this country and I know that I can make it great again.

We have to build a wall, we have to get the bad people out. A lot of the illegals, if you look at Chicago with the gangs,... you look at Baltimore, you look at Ferguson, a lot of these gangs, the most vicious, are illegals. They're outta here. The first day I will send those people ... those guys are outta here. [cheers] They talk about guns, I'm a big second amendment person, I believe in it so strongly [cheers]. Big.  But they talk about guns and you look at Chicago, Chicago has the toughest gun laws in the US by far, and people are being shot with guns all over the place. You need enforcement but you also have to get the bad people out, the people that aren't supposed to be here and we're gonna get em out so fast, so quick --- and it's gonna be tough. It's not gonna be "oh please will you come with us please will you please come with us." Because you know these law enforcement people, and I know the guys in Chicago, the police commissioner's a great man. They can do it, if they're allowed to do it. I know the guys, I know em, New York, they're great. Bratton, great. They can all do it. They can all do it. But they have to be allowed to do their job, they have to be allowed to do their job. [Cheers]

It isn't just liberals like Chris Hayes who are becoming alarmed by this. Republican strategist Alex Castellanos sees the attraction of Trump in similar terms:

When a government that has pledged to do everything can't do anything, otherwise sensible people turn to the strongman. This is how the autocrat, the popular dictator, gains power. We are seduced by his success and strength... As our old, inflexible government grows beyond its capacity to service a complex and adaptive society, and its failures deface our landscape, it creates demand for efficiency. Who can bring order to this chaos? Who has the guts and the strength to make the mess we have made work?

Then, the call goes out for the strongman. Who cares what he believes or promises? And with the voice of the common man, though he is anything but, the strongman comes and pledges to make America great again.

Castellanos agrees with Trump that America is going to hell in a handbasket largely due to liberal failure, but doesn't think that consolidating power in the hands of a single billionaire is a great way to deal with it.

It's easy to dismiss Trump's ramblings as the words of a kook.  But he's tapping into the rage and frustration many Americans feel when our country is exposed as being imperfect. These Republicans were shamed by their exalted leadership's debacle in Iraq and believe that American exceptionalism is no longer respected around the world -- and they are no longer respected here at home. Trump is a winner and I think this is fundamentally what attracts them to him:

I will be fighting and I will win because I'm somebody that wins. We are in very sad shape as a country and you know why that is? We're more concerned about political correctness than we are about victory, than we are about winning. We are not going to be so politically correct anymore, we are going to get things done.

But his dark, authoritarian message of intolerance and hate is likely making it difficult for him, or any Republican, to win a national election, particularly since all the other candidates feel compelled to follow his lead. (Those who challenged him, like Perry and Paul, are sinking like a stone in the polls.) And while Trump's fans may want to blame foreigners for all their troubles, most Americans know that their troubles can be traced to some powerful people right here at home.  Powerful people like Donald Trump.

Still, history is littered with strongmen nobody took seriously until it was too late. When someone like Trump captures the imagination of millions of people it's important to pay attention to what he's saying. For all his ranting, you'll notice that the one thing Trump never mentions is the constitution.