Donald Trump at the wheel: He's driving the GOP over a cliff, and the establishment can't stop him

The GOP is being overrun by "The Donald's" xenophobia. But even if it wanted to, the establishment cannot stop him 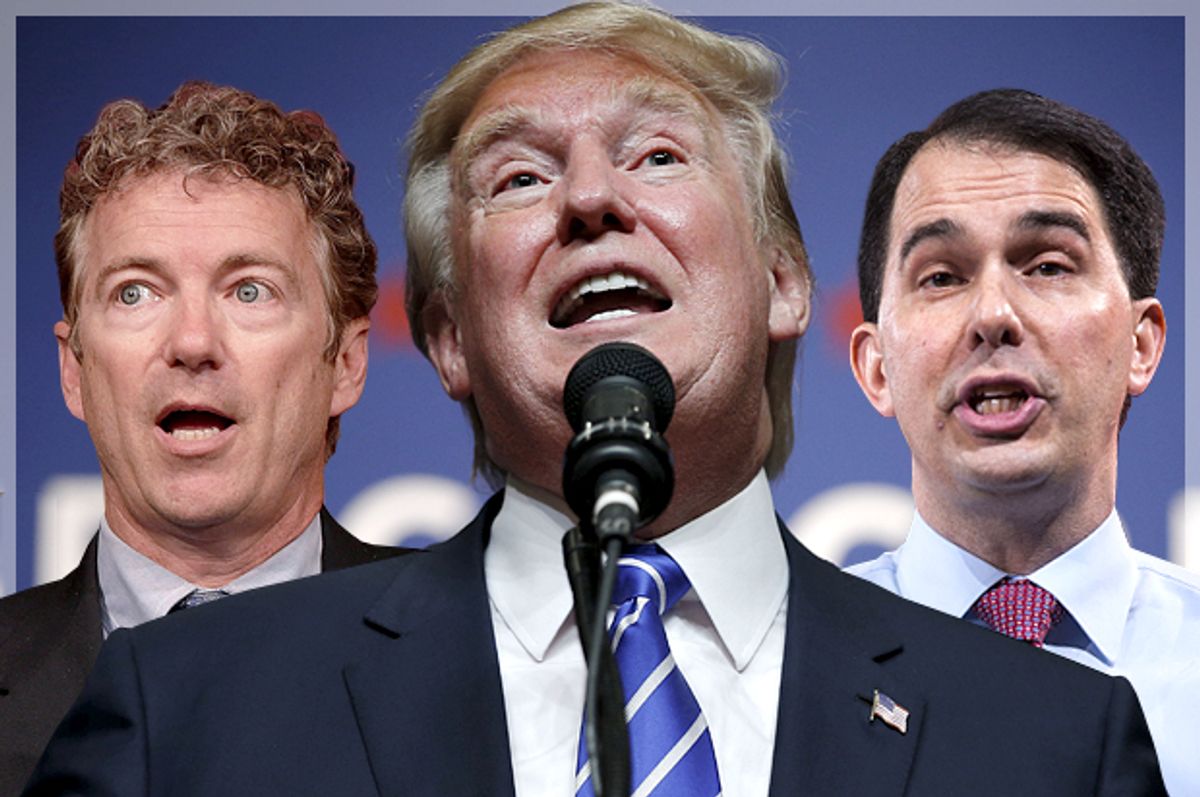 After a week’s worth of soundbites from presidential candidates about “anchor babies” and repealing birthright citizenship, it is now clear, if it wasn’t already, that Donald Trump has the steering wheel of the Republican Party firmly in his grasp.

So despite the Republican National Committee’s infamous “autopsy” of the 2012 election — which found that the party could not compete unless it fixed its increasingly toxic image among the Latino electorate — the GOP’s presidential primary has devolved into a contest to see who can demonize and dehumanize immigrants the most. If a sensible, pragmatic Republican Party “establishment” actually existed, now is right about when it would step in. But it doesn’t, of course; so it won’t.

Which is not to say that what passes for the GOP establishment nowadays has gone silent. As recent pieces from elite conservative pundits in Slate and Politico Magazine show, something approximating an establishment is still in the mix. The problem, though, is that this establishment is completely incapable of controlling Trump, much less the party’s overall message. And whether they opt for conflict or cooptation, their attempts to manipulate Trump will inevitably fail.

Because the establishment, unlike Trump, cannot bring itself to see the Republican Party — and the conservative movement, in general — for the clumsy vehicle of politicized resentment and white identity politics that it really is.

True, conservative elites have been playing some version of this game for a while now; using extreme reactionaries to win elections but pretending the GOP is run by urbane, center-right moderates. But those forces used to be disorganized enough that long-shot protest candidacies (like the Pat Buchanan’s in the 1990s) were the best they could do. And that made maintaining the lie — that the conservative movement’s inmates did not run the asylum — a whole lot easier. At this point, however, that’s no longer the case.

Nevertheless, they’re still trying. And thus do we get pieces like this one in Slate, by National Review’s Reihan Salam, which operates from the absurd premise that conservative, iconoclastic minority voters can be brought into the GOP coalition without tearing the whole thing apart. “There appears to be a nontrivial share of black voters who are open to a center-right message,” Salam writes near the end of his piece. “Winning them over,” he continues, “will mean decontaminating a GOP brand.”

If the GOP coalition was the pluralist, cosmopolitan entity of his imagination, Salam would have a decent point. But such a GOP wouldn’t have a xenophobic, populist figure like Trump, whose mantra is that “we” must “take our country back,” as its biggest star, would it? If the Republican Party was comprised of voters who signed-up because they held “conservative positions on issues,” which is what Salam seems to think, then how could an ideological grab-bag like Trump be in the position he’s in?

As Kentucky Sen. Rand Paul complained earlier this summer, Trump is anything but a consistent conservative. But as Wisconsin Gov. Scott Walker, who hopes to be the second-choice of Trump’s supporters, seems to understand, the kind of voters who now control the GOP primary don’t see politics through that prism. They don’t love Trump because of any long-held views on taxes or abortion or Social Security; they love Trump because they see him as “one of [them].”

Obviously, Salam is not the only serious right-wing pundit to misunderstand the GOP coalition. He’s not even the only one from National Review to do it as of late. Editor-in-chief Rich Lowry recently wrote a piece for Politico Magazine that celebrated Trump’s influence. Yet he littered his praise with caveats about how Trump’s “bar-stool bombast” and “excesses” obscured his larger, more intellectually defensible views. But for the Republicans flocking to Trump, the rhetoric isn’t an afterthought; it’s what Trumpism is.

Lowry’s attempt to rush to the front of the pro-Trump mob and then try to lead it is relatively feeble. But even if his column was as powerful as it would need to be to get these people’s attention, it would still fail. Because Lowry, like Salam, doesn’t know how to talk to these people, which is due in no small part to his spending so much of his career responding to liberal criticism by pretending these folks don’t even exist. In that sense, speaking to them in their own language, as Trump does, would be a defeat.

Then again, what would Lowry or Salam actually say to these people, hypothetically, to get them to stop making the GOP look so viciously nativist? While the differences between the two groups are in a sense aesthetic, this is a case where style and substance and one and the same. Trump’s backers adore him because he’s willing to say the things they believe, but are told they shouldn’t. For them, a strategy that required no more public talk of “anchor babies” would be missing the point.

And that’s why the GOP finds itself in its current predicament, and why no one should expect a pragmatic, sober-minded establishment to ultimately step in. Until the Trump phenomenon collapses due to the public’s fatigue or Trump’s individual boredom, this is how the GOP primary will remain. The only candidates who’ll survive will be the ones willing to kick dirt on illegal immigrants. They’ll be the ones who stopped campaigning in the GOP of the pundits’ imaginations, opting instead to win over voters who actually exist.