It didn't start with Limbaugh and Trump: The deep roots of the GOP's war on women

Though Rush & The Donald draw attention for their vulgar misogyny, conservative assault on equality dates to Nixon 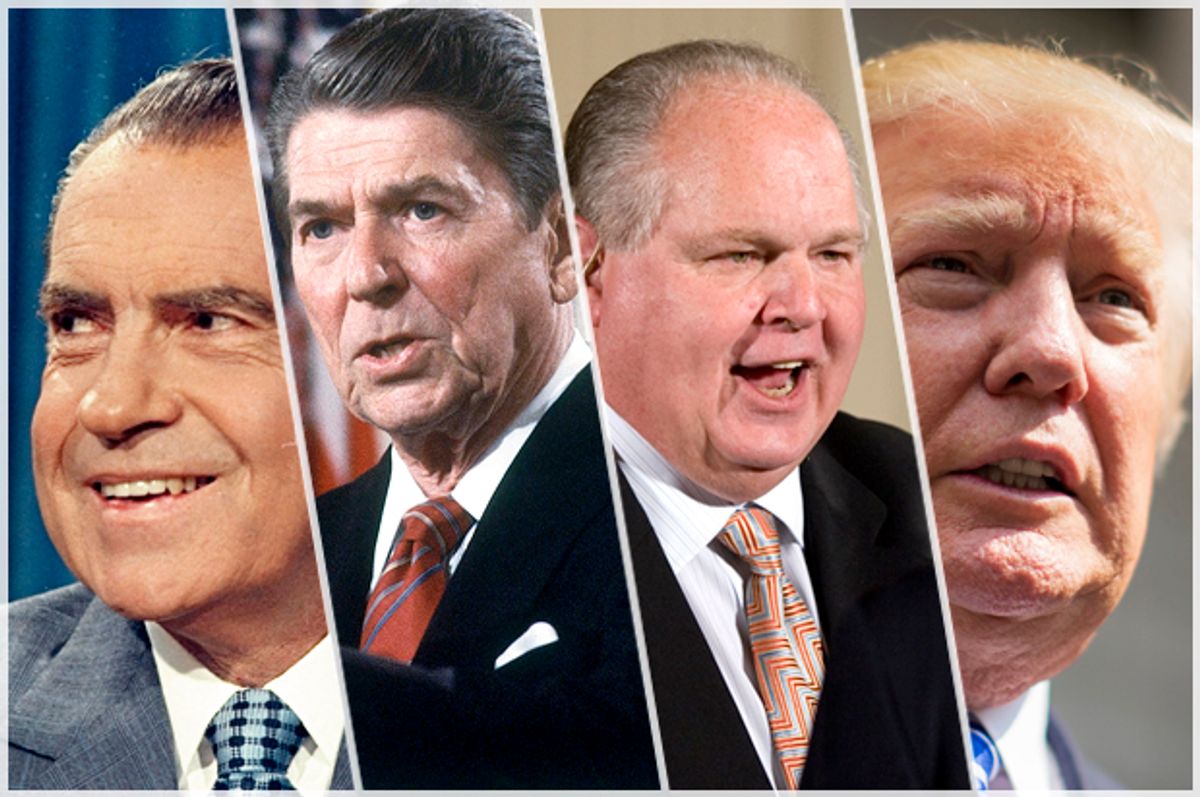 Donald Trump reduces the dog whistles of Movement Conservatism into cartoons that expose them for what they really are. Movement leaders profess to be shocked by his crude attacks on Megyn Kelly, but he has simply ripped the gentility off sentiments that the eminently “respectable” Weekly Standard made in its cover story three months ago. “If Hillary Clinton wins the presidency in 2016,” Joseph Epstein wrote, “she will not only be the nation’s first woman president but our second affirmative-action president,” elected, he said, thanks to her status as a member of a “victim group.” Days later, Fox News went after First Lady Michelle Obama with a similar argument. Fox contributor Angela McGlowan told viewers that “the reason she got into Princeton was probably because of affirmative action,” and that “the reason she became an associate at a law firm was probably because … they needed a woman, and a woman of color.” She added: “That’s a twofer.”

Trump’s piggishness is merely a less euphemistic way of expressing what those who dominate the Republican Party have long believed and argued. For Movement Conservatives, women, by definition, are subordinate. They cannot succeed in America unless the government gives them a leg up. Properly constructed, the nation belongs to white men.

The idea that the country should be led by white men goes back to antebellum slaveholders, who argued that the world was naturally divided between working drudges and elite leaders, who directed their workers and used the wealth the workers produced to promote progress. Slaves and workingmen had no such vision or ability, and they must be kept from power. If they were permitted to participate in government, they would demand more of the wealth they produced and fritter it away in extra food and small luxuries. That “redistribution” of wealth would hamstring society’s leaders, preventing them from devoting their energies and capital to advancing humanity.

With the end of slavery and the enfranchisement of former slave men, this elitist argument translated into opposition to any social welfare legislation funded with taxes. But it focused on excluding lower-class men from power. Even after women got the vote in 1920, the idea that they stood for home and family helped to keep them from being seen as politically dangerous in the way that working men and male minorities were.

Few politicians did much to move the needle toward anything resembling gender equality, but it was President Nixon who first threw women under the political bus of Movement Conservatism. Desperate to consolidate support during the turmoil of late 1960s, Nixon adopted the language of Movement Conservative speechwriter Pat Buchanan, who had come to the Nixon White House after Barry Goldwater’s disastrous 1964 campaign. In 1969, Buchanan divided the nation in two in a speech in which Nixon pleaded for the support of the “silent majority” to enable him to stand against “a vocal minority” trying to impose its will by protesting in the streets. Among those in the streets, of course, were the women demanding equal rights and fighting for “women’s lib[eration].” By 1971, Betty Friedan, author of the 1963 "The Feminine Mystique," complained that Nixon was doing nothing for women. What women really needed, she told an audience of politically active women, was political power.

In January of the next year, the editors of Time defined Nixon’s silent majority when they named “The Middle Americans” their “Man and Woman of the Year.” According to the article explaining the award, these men and women prayed, loved America and hated the intellectuals, professionals and civil rights and women’s rights protesters who seemed to be taking over the country. Squeezed by inflation, they resented that their tax dollars went to programs that helped the very protesters who showed such disdain for them and what they believed to be traditional American values, including a family structure that had a male household head and a stay-at-home wife.

After National Guard troops killed four students at Kent State in May 1970, Nixon worked to consolidate his wavering support by inflaming middle-class white voters against the “detractors of America” who wanted the government to help them out. On Labor Day 1971, Nixon contrasted industrious and purposeful men with lazy and slothful protesters demanding government programs. Those with a strong work ethic had built America, he said, but now unspecified “voices” were attacking the work ethic. “We see some members of disadvantaged groups being told to take the welfare road rather than the road of hard work, self-reliance and self-respect,” he claimed. The 1972 passage of Title IX, which promoted women’s education and athletic opportunities, and the Roe v. Wade decision the following year, encouraged opponents to believe that “liberated” women were absorbing government largesse to overturn the traditional order.

In 1976, Ronald Reagan pulled together grasping women and minorities in his image of the “Welfare Queen.” He described a Cadillac-driving, unemployed female moocher from Chicago’s South Side — a geographical reference that implied the woman was black without actually saying so. “She has 80 names, 30 addresses, 12 Social Security cards and is collecting veteran's benefits on four non-existing deceased husbands,” Reagan claimed. “And she is collecting Social Security on her cards. She's got Medicaid, getting food stamps and she is collecting welfare under each of her names.” The story illustrated the idea that women, especially black women, were a special interest that simply wanted government handouts. They voted for Democrats in exchange for laws that provided those handouts. Movement Conservatives had now firmly lodged women in the category of people who engaged in the systematic perversion of government about which slave owners had warned: letting women vote amounted to wealth redistribution that would destroy traditional society.

As Reagan rose to power, Movement Conservatives harped on the idea that women were ruining the nation with their demands for government support. Nothing illustrated their success more clearly than when, in 1984, Democratic presidential candidate Walter Mondale made the historic decision to tap a woman to be his running mate. New York Representative Geraldine Ferraro was a powerful Democratic leader who sat on the both the House Budget Committee and the Steering and Policy Committee. Nonetheless, sixty percent of voters thought Mondale had chosen her not because she was the best candidate, but because he was under pressure from the women’s groups whose votes he needed to win. In 1989, Movement Conservative anti-tax crusader Grover Norquist and Christian Coalition leader Ralph Reed brought evangelical Christians to the support of the movement by focusing on abortion as the choice of women who refused to accept the results of their own actions. Increasingly, Movement Conservatives defined women outside their circle as a special interest eager for handouts to fund immoral lifestyles. After dramatic gains in the 1970s, women who did not embrace Movement Conservatism disappeared from mainstream public debate.

During the Reagan years, Movement Conservatives continued to use the idea of women as a special interest group in order to promote their economic vision. Insisting that the key to a thriving economy was a booming business sector, they argued that businessmen must have confidence that they could keep their profits. Taxation to promote social welfare programs that helped women destroyed that confidence and thus weakened the country. When Reagan’s 1986 tax overhaul offered deductions to poor families, leading Movement Conservatives like Phyllis Schlafly protested vehemently that such a benefit was “just an idea of liberal bureaucrats who want to redistribute the wealth.” Anything “anti-growth” was “anti-family.” The best thing for American women was not to offer them equality of opportunity; it was to strengthen big business.

The end of the Fairness Doctrine in 1987 began to shred the veneer of this anti-woman argument. With the end of the requirement to present evidence fairly, hosts like Rush Limbaugh emerged as leaders in the war against women who did not embrace their ideology, railing against “Feminazis” who threatened white men by taking their jobs, policing their speech and demanding equal rights, and who wanted to promote as many abortions as possible. In the hands of Limbaugh and other talk radio hosts, policies designed to open opportunities for women and minorities turned white men into victims. Even worse, they threatened to turn the nation into a hotbed of socialism as the taxes necessary to fund those programs redistributed wealth. Bashing women who advocated government programs became an easy shorthand for opposition to such programs, as Movement Conservative media illustrated by attacking Georgetown law student Sandra Fluke as a “slut” and a “prostitute” because she testified before Congress to favor of laws requiring employers to include birth control in their health insurance packages. As Rush Limbaugh put it: “She wants to be paid to have sex ... She wants you and me and the taxpayers to pay her to have sex.”

Today Movement Conservatives ridicule the idea that they are waging a war on women. They argue that their focus on business growth and slashing welfare programs and government regulation is, by definition, pro-woman and pro-family, because everyone benefits when the economy booms, and the economy can boom only when businessmen don’t labor under the threat of taxes or regulation. Protecting women’s right to equal pay or raising the minimum wage (most minimum wage workers are female) would, in their formulation, hurt women. “I am insulted when I hear somebody talk about ‘women’s issues,’” the Republicans’ only female presidential candidate, Carly Fiorina, said recently. “Feminism” is “a left-leaning political ideology” that is “used as a political weapon to win elections.”

But when Donald Trump calls women fat pigs, dogs, slobs and disgusting animals, he exposes the Movement Conservative ideology as the sexist vision it is. When women have a political voice, many of them support government policies that promote education, maintain clean and safe cities, and force businesses to pay fair wages and provide safe work environments. Those things cost tax dollars. But they are not handouts for lazy sluts; they are the duties of a government that responds to everyone rather than to a very small class of wealthy leaders. Dog whistles about women who want handouts are simply an acceptable way to say that women are not worth as much as the men who must dominate the government. At the heart of Movement Conservatism is the conviction that America belongs to elite men alone.