Beyoncé's deafening silence: Why #BlackLivesMatter needs her voice now more than ever — in Vogue and beyond

Her recent refusal to give interviews, including for the Vogue September issue, leaves a void few others can fill 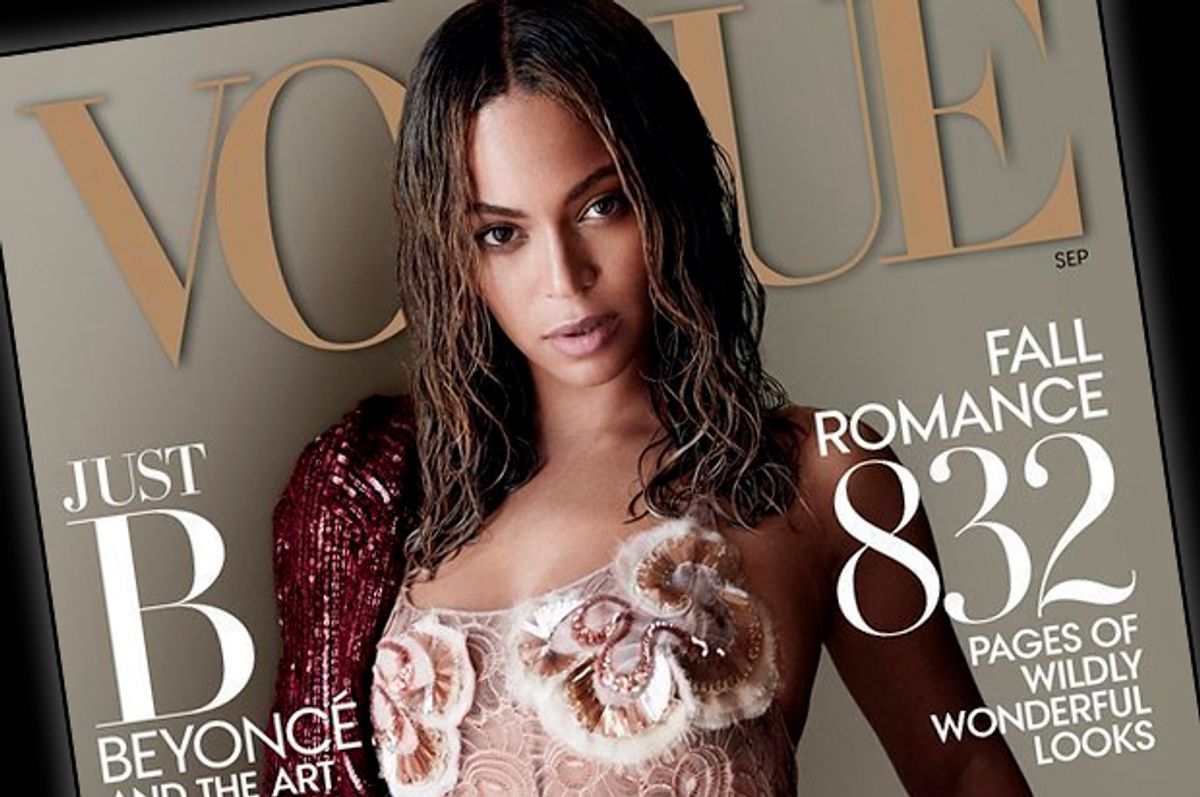 Over the weekend a 13-year-old actor offered up a series of Instagram posts o her 2 million followers, explaining the importance of intersectionality and the problem with "white feminism." Rowan Blanchard of “Girl Meets World,” like her friend Amandla Stenberg, regularly uses her platform to speak out against police brutality and to call for a feminism that decries racism as a major issue in America. She’s starting to make headlines for these acts because a celebrity championing a social issue that affects the entire country is headline-worthy news—it's exciting, it's surprising and, for young fans paying attention, it's empowering.

This style of public activism also inadvertently highlights the celebrities who choose not to speak out, or those who enjoy the privilege of silence, like Beyoncé, perhaps the greatest (and therefore, most disappointing) example of what happens when an artist benefits from the myriad voices championing their career, but clamps up when those same voices are being silenced, distorted or dismissed by the general public.

When Vogue's September issue was revealed with Beyoncé on the cover, The New York Times noted her recent politics of silence in a story by Matthew Schneier about the conspicuous absence of a Beyoncé interview to accompany her appearance on the most important fashion cover of the year. Apparently, it’s been about two years since she gave an actual live interview at all. A Yale professor argued that there’s something refreshing and empowering in this inaccessibility, as it points directly to what Schneier calls a “hard-won privilege.” Others have argued that it’s not so much refreshing as it is a terrifying reflection of her image control campaign. In an attempt to explain this silencing, Schneier's article points out that her last few live interviews didn’t go so well, and so perhaps she has decided to put herself in a position to control the narrative. However, if it’s true that she stopped giving interviews after some of her most self-deifying quotes went viral, then it should be said that, if anything, people took issue with Beyoncé talking about Beyoncé. No one said she shouldn’t try, say, talking about something else.

Suppose, for example, that she’d used this grand moment—as the third black woman to ever cover Vogue’s September issue (and only the 19th to land a solo Vogue cover in the history of the publication) to speak out against the racism that plagues this country—all the way from Ferguson to the halls of Condé Nast. Or suppose she’d used it to bring more awareness to the work she’s been doing with her BeyGOOD foundation in Haiti. I can’t imagine Vogue would have begrudged her time to speak on any of these subjects. Consider the possibilities if she’d taken a few moments to talk briefly about her husband, a product of Marcy Projects in Brooklyn and no stranger to racial profiling and systematic poverty. Would she have swayed the Vogue readers on any of their political ideals or beliefs? Not necessarily. But she would have made a powerful (and empowering, for others) show of solidarity for those longtime fans who are hoping for a bigger, louder voice to emerge from a sea of celebrities posting endless selfies and images of yacht trips, with no public acknowledgement of the Black Lives Matter movement or the issues it's taken up.

Suppose that, instead of Janelle Monáe, Beyoncé had shouted “Say Her Name: Sandra Bland!” on a track, or released something akin to “Hell you Talmbout”? If she can sing for the President and sing for Pepsi, why can’t we ask that she sing for her people? (We know she grew up listening to many singers, like Aretha Franklin, who did.) Wouldn’t that have been more “empowering” than one more gorgeous, glossy photo spread? Wouldn’t that have been more refreshing than this flaunting of a privileged silence?

Beyoncé is being singled out at the moment because her silence has become a point of fascination, but she’s, obviously, not the only celebrity to remain deafeningly mum on the issues of the Black Lives Matter movement. Many years ago, we had a rapper so bold as to go on national television and declare that the President “doesn’t care about black people.” He, too, is somewhere enjoying the privilege of silence. As many pointed out earlier this year when TIDAL launched, Beyoncé, Kanye West, Nicki Minaj and many others had no problem gathering on a stage and banding together for the sake of their art (and their paychecks), but there’s been no unified effort to take a stand against some of the biggest issues of our time. It’s true that Beyoncé and Jay Z were said to have donated thousands of dollars to bail out Ferguson protestors. And it’s true that, two years ago, they appeared at a Justice for Trayvon Martin march. But where are they now, when their voices could be even more useful as the movement continues to pick up political and cultural momentum?

One thing that makes Beyoncé such an incredible success is that she, like other icons, knows how to evolve with the times. Her fans adored her when she was rocking cornrows in the “Say My Name” video, and they still adore her now that her weave is so confounding (and expensive) that The Atlantic published an entire article dedicated to her “stringy” hair. The same is true for the Kanyes and Nicki Minajs of the world—they have been championed by the same people, from the beginning — they were beloved by BET long before they started racking up Grammys and MTV VMAs. We are not supposed to ask that these celebrities reciprocate that love, in the same way that we are not supposed to ask that celebrities be political, or simply speak out about political issues (as if we’re supposed to leave all that up to the politicians). But who made up that rule?

This weekend Wiz Khalifa was restrained by police, allegedly for using his hoverboard in an airport. He posted a disturbing video showing multiple officers holding him down against the floor, yelling “Stop resisting!” to a man who was quite visibly not resisting. I admit that I got quite a thrill watching the video, knowing that, because he’s a celebrity, more people would take interest. It’s the same kind of thrill I get every time Jesse Williams takes to Twitter to educate the masses; it’s a sad and short-lived thrill, because I know it’s not enough to stop police killings (we’re at 746 now, by the way), but I also know that it’s a start.

As in the case of Rowan Blanchard’s intersectional feminist Instagram essay, these isolated cases of celebrities speaking out and saying, in some way or another, that Black Lives Matter end up highlighting the failure of others to do so as well. Of course, it is helpful—integral—that we have activists like Deray McKesson and Johnetta Elzie. And celebrities like Williams, along with Killer Mike, Amandla Stenberg and Beyoncé’s own sister Solange are using their platforms to support the movement and to support the people who have supported them. Laverne Cox, who has made it clear that her activism is an organic part of her own celebrity—and a necessity—has declared a state of emergency for the transgender community, following the 17th known murder of a trans woman this year. These are all incredibly talented people with incredible reach. They all risk plenty by speaking out.

So who says Beyoncé—and other celebrities with even further reach than those mentioned—gets to remain silent? Who says we should only enjoy her music, or her next magazine spread, or her next vegan-related announcement, without demanding more of her? Who says that she gets to sit back and enjoy this silence—a silence that empowers only Beyoncé? The short answer is “money.” Money and privilege say that she gets to do this. But, if nothing else, she shouldn’t get to do this without critique, and without the rest of us calling her out, along with those other silent celebrities. After all, isn’t it time—and isn’t it the right time—that we ask more of our Beyoncés?