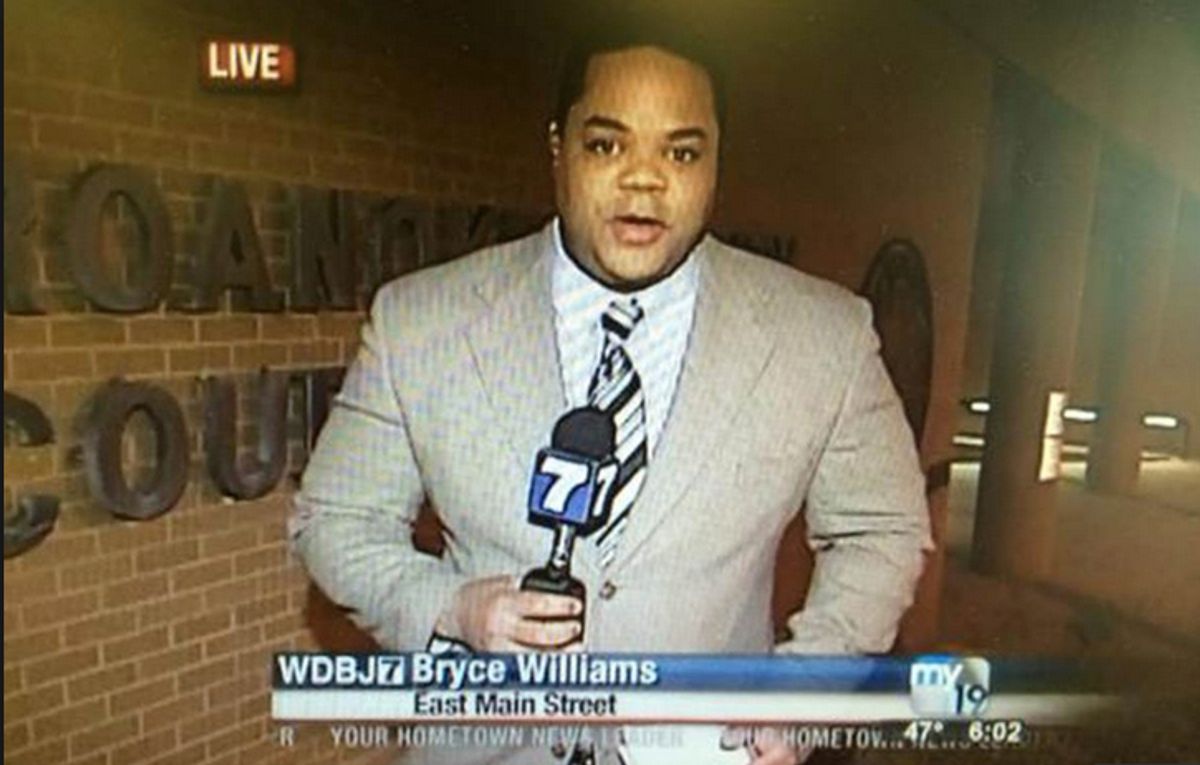 At 8:26 am Wednesday, ABC News received a fax from the man who later was identified as the gunman who killed two young Virginia journalists as they reported live on location earlier that morning. The 23-page documented came nearly two hours after the shooting, which killed reporter Alison Parker and cameraman Adam Ward, and appeared to have come from the shooter, Vester Lee Flanagan, also known as Bryce Williams.

“MY NAME IS BRYCE WILLIAMS,” ABC reports the document read.

Hours later, at around 10am, while a massive manhunt for Flanagan was under way, a man who identified himself as Bryce Williams called ABC News, confessing to the shooting.

Flanagan was known to use the pseudonym while reporting on-air.

The cops are “after me” and “all over the place,” Flanagan is reported to have told ABC reporters before hurriedly hanging up the phone.

This afternoon, after handing over the entire document to law enforcement, ABC News released portions of  what has been called Flanagan's manifesto. In the excerpts, it is evident that Flanagan sought the notoriety of past mass shooters, positively citing Virginia Tech shooter Seung Hui Cho as an inspiration and suggesting he was motivated by this summer's shooting of a historic African-American church in Charleston, South Carolina:

“What sent me over the top was the church shooting. And my hollow point bullets have the victims’ initials on them."

It is unclear whose initials he is referring to. He continues, “As for Dylann Roof? You (deleted)! You want a race war (deleted)? BRING IT THEN YOU WHITE …(deleted)!!!” He said Jehovah spoke to him, telling him to act.

ABC reported that the manifesto also claimed Flangagn "suffered racial discrimination, sexual harassment and bullying at work," and that "he has been attacked by black men and white females." In the "rambling" document," Flanagan claimed "he was attacked for being a gay, black man."

According to court documents, Flanagan sued a Tallahassee, Florida, news station in 2000, alleging racial discrimination by co-workers and supervisors. He said he was called a “monkey” by a producer in 1999, and claimed that another black journalist was told to “stop talking ebonics.”

WDBJ General Manager Jeff Marks described Flanagan, who was fired from the station in 2013 due to anger issues, as "being difficult to work with." Flanagan filed an EEOC complaint after being fired by WDBJ, seeking $15,000 in damages. The case was later dismissed.

Before shooting and killing himself in the midst of a police chase, Flanagan live-tweeted his supposed motive for the shooting. “Adam went to HR with me after working with me one time!!!” one tweet read while another alleged that Parker had made “racist comments.”