The case against Joe Biden 2016: Why remind Democrats he's even less liberal than Hillary?

On crime, bankruptcy law and abortion, Biden is to Clinton’s right. His only way to win is to attack her personally 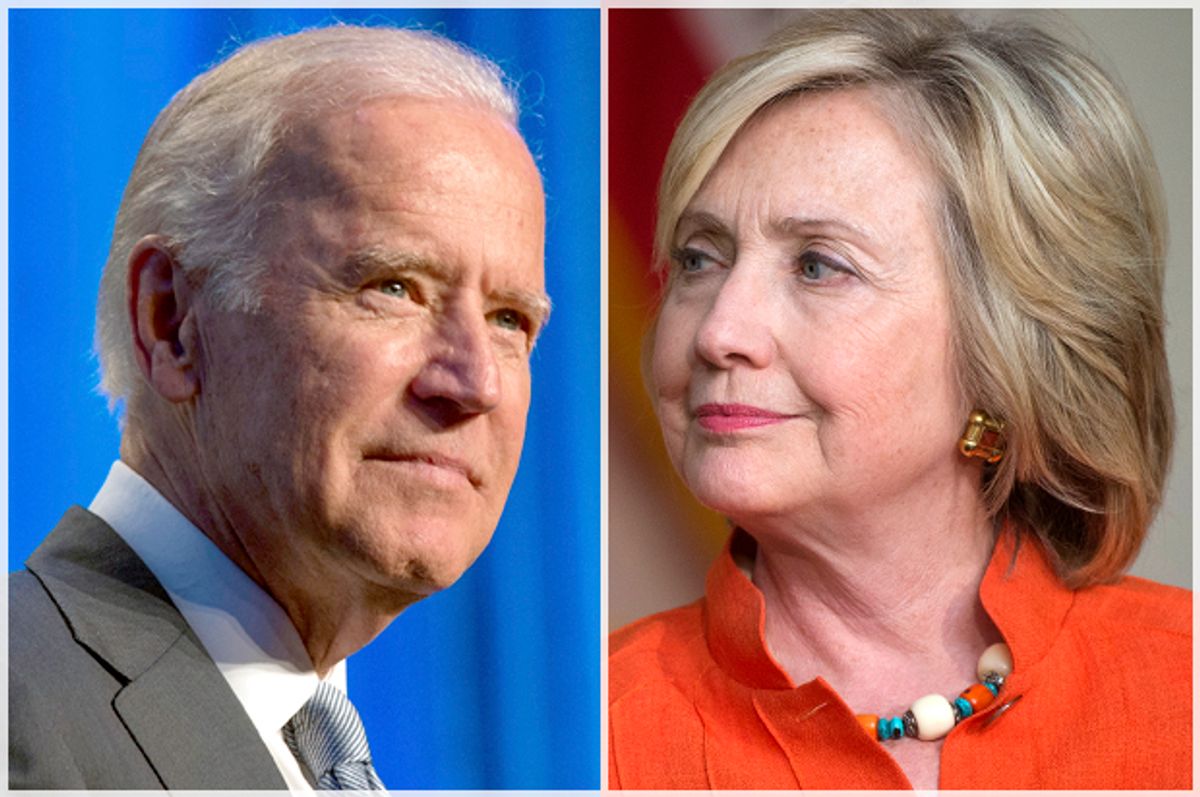 I’m on the record as a Joe Biden admirer. His love of people and politics is infectious, and he’s publicly endured more crushing personal loss than any one person should have to bear. He’s done it with grace and kindness, modeling the way we can suffer and stay open to life, supporting anyone in his world who’s enduring similar pain. He’s America’s favorite uncle, and I don’t mean that in the condescending way some in the Beltway do.

I think Biden would have made a good president. But the time has passed for him to declare himself a serious 2016 candidate – barring a genuine, not media-confected, stumble by Democratic frontrunner Hillary Clinton. I acknowledge that Biden's capacity for planning a run had to be shattered by his son Beau's cancer diagnosis in 2013 and death earlier this year. Still, even until that point, while he kept his options open, he took no steps -- in terms of fundraising, organizing or staffing -- to telegraph he was seriously interested in 2016.

At this point Biden can only run on a platform that buys into all the worst GOP stereotypes about Clinton, particularly that she’s “not trustworthy.” And while it’s true that recent polls show he scores higher in trust than Clinton does -- every horserace-loving journalist urging him to run cites those numbers – in fact their overall favorable/unfavorable ratings are similar Biden’s high trust marks come at least partly because nobody’s been taking potshots at him for at least a decade. If he runs, the potshots would come – and many would come from the left.

Many of us love Biden as a liberal hero, especially for having the president's back these last seven years, and for his courage in coming out for marriage equality even before his boss did. But there's a lot in his record that could tarnish his liberal legacy if it got serious attention.

Biden has a reputation as a populist, and he’s a fairly liberal Democrat, but in the 110th Congress Clinton was the 11th most liberal senator, while Biden ranked 33rd (Obama was 23rd.) His “secret” meeting with Elizabeth Warren last weekend got attention – but few picked up on what was most interesting about it. It seemed to signal a plan to ally with Warren, which would be a great idea for Biden. But it should have reminded us that through most of his career, he was the senator from Credit Card Land – Delaware – and voted that way.

Warren even called him out in her book as leading the charge to make declaring bankruptcy tougher for working Americans. He voted for the awful 2005 bankruptcy bill, leading the great David Cay Johnston to ask during his 2008 run: "How does the 2005 bankruptcy law fulfill your Constitutional duty to 'promote the general welfare,' as it applies to those who through accident, serious illness or layoffs cannot repay their unsecured debts? How does it help resolve the current mortgage crisis?"

In an era of rising populism in the Democratic Party, Biden would have to answer for that history.

Slate’s Jamelle Bouie laid out Biden’s role in the wave of anti-crime and anti-drug legislation from the '80s and '90s that brought us the mass incarceration crisis, and its new-Jim-Crow political and economic consequences for African Americans. His name is on every major piece of legislation from those years. In 1984, he worked with Sen. Strom Thurmond and the Reagan administration to pass the bill that expanded civil asset forfeiture, now controversial for the way local police departments share in captured assets. He was behind the law that made sentences for crack cocaine higher than powder, which targeted blacks more than whites.

As I wrote earlier this year: At the time both Clintons, and Biden, were reckoning with a genuine rise in violent crime, and the bill was supported by African American mayors and the Congressional Black Caucus who saw what the crime wave was doing to low income communities. Both Clintons have now acknowledged that the bill resulted in over-incarceration, particularly for black men, and Hillary Clinton has announced her support for policies that would reverse that trend. There’s no reason Biden couldn’t, or wouldn’t, do the same. But let’s acknowledge at the get-go that he bears much more responsibility for that generation of law enforcement overreach than Clinton did as First Lady.

Finally, facing a woman candidate, his record on women’s issues will get plenty of attention. It’s mostly good – he wrote and sponsored the Violence Against Women Act, for one thing – with a few major blemishes. The devout Catholic evolved over time to be mostly pro-choice, but he consistently supported the Hyde Amendment prohibiting the use of federal funds for abortion in the Medicaid program for poor women – and even, for a time, opposed adding exceptions for cases of rape and incest.

He is also remembered less than fondly by many feminists for his role in Supreme Court Justice Clarence Thomas’s 1991 confirmation hearings. As chair of the Senate Judiciary Committee, he allowed Anita Hill’s testimony but not that of other women who would have offered similar stories. And he presided over a tableau in which 11 white men either ignored or harangued a black female law professor for putting her career on the line to report Thomas’s sexual harassment. Writing about the documentary “Anita” last year, Slate’s Dahlia Lithwick concluded that “Joe Biden…and the Democrats who failed her come out looking almost as bad as the Republicans who call her names.”

Yes, it was 24 years ago, but you’d be surprised how many women remember that awful week. And believe me, all that and more would be resurrected if Biden treated another admired woman with less than full respect. Yes, I’m talking about Hillary Clinton.

Early in the Obama administration, I wasn’t sure about how I would feel if Biden challenged Clinton for the 2016 nomination. He certainly had the right to do so, and I would certainly have considered supporting him. But I find his late maneuvers disturbing, even allowing for the possibility that Beau Biden's illness and death kept him from making an earlier move. Now his exploration of a run is being read as a show of no-confidence in Clinton’s campaign, and try as I do to resist simplistic Beltway readings of complicated political matters, I can’t see it any other way myself.

If he should join the race, he’d be doing so because he thinks she can’t win. He can’t boast of any big policy disagreements with her – except possibly on foreign policy -- unless he wants to do so from her right. It feels like the ultimate white-knight fantasy – and it would betray a certain disrespect for Clinton. Women so often suffer from an assumption of weakness and incompetence. In 2007, candidate Obama was taking hits from all sides for the real and imagined inadequacies of his campaign, but he turned things around. Clinton is in much better shape today.

Again, all of this would feel very different if Biden had expressed a serious intention to run much earlier. At this point, the only way he can possibly defeat Clinton is to bludgeon her politically, using stereotypes and slurs mostly crafted by her Republican enemies. I still think she would beat him, given her edge in fundraising and organizing, but she could wind up like Mitt Romney: bloodied for the general election because her primary opponent did the other party’s dirty work.

Joe Biden will go down in history as a great, admired vice president who taught the world how to heal from unbearable loss. He doesn’t want to be remembered as the man who upended the historic candidacy of the woman with the best shot at being elected president.