The scifi fans are alright: I saw the future at the Hugo Awards — and it will never belong to the toxic right-wing trolls

Online hate campaigns like Sad Puppies aren't harmless—but when we gather in person, their powers fizzle out 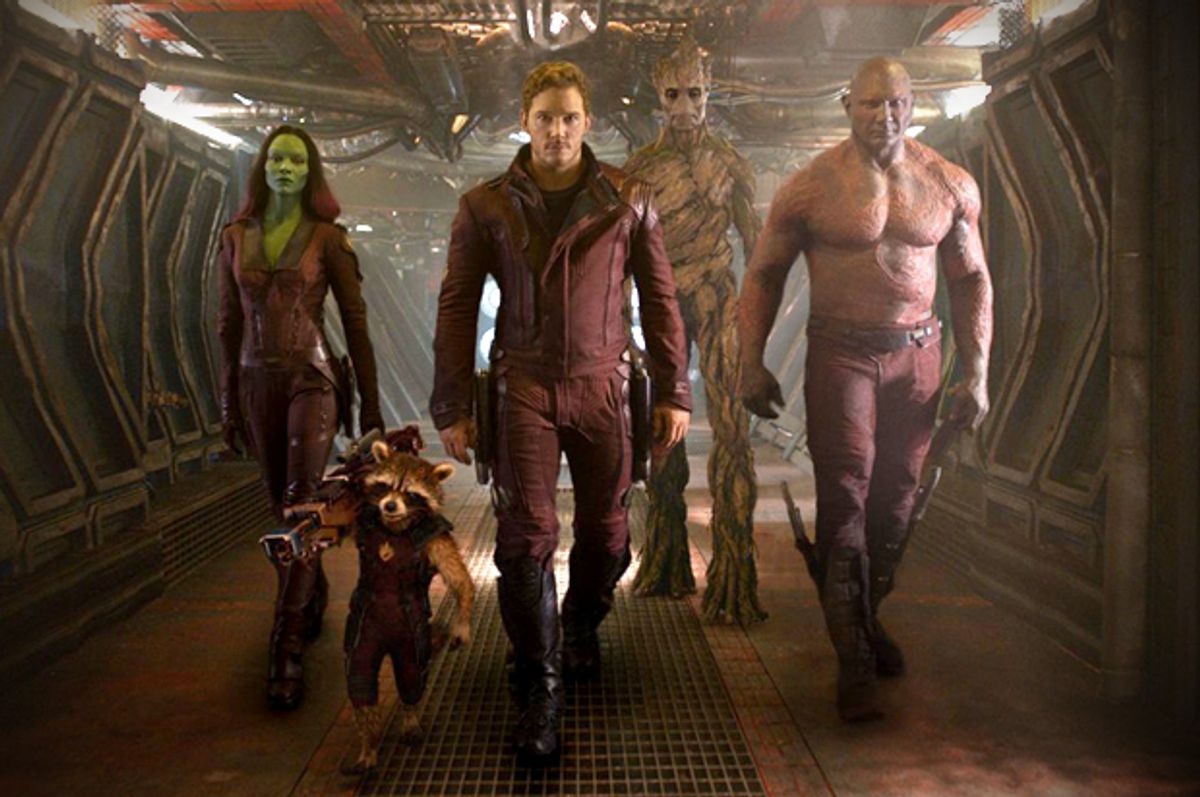 This weekend I was attending the 74th World Science Fiction Convention, this year held on Spokane, Washington, where the 2015 Hugo Awards were being presented. It was my first time as an in-person attendee of the WorldCon and my second time as a Hugo voter, since, like most science fiction fans, I didn’t care enough about the Hugos to spend $40 to join the convention and vote until scary people bizarrely calling themselves “Sad and Rabid Puppies” started fucking with them.

Others have already written about what went down with that this year--a concerted attempt to game the nominations system to turn the ballot into a troll ballot, a sound rejection of that ballot with a record number of “No Award” votes this year. Most of them, however, weren’t there, and I was.

The one thing I’d like to add to that conversation is how much of a difference it made to me, personally, to do something I hadn’t done in a very long time--going out to a science fiction and fantasy event in person and talking with people face-to-face rather than writing tweets and thinkpieces about this stuff online.

Online, it feels like science fiction fandom has erupted into civil war. The media’s urge to always give “both sides of the story” lends itself to that kind of coverage. Certainly Breitbart and other right-wing outlets have milked this controversy as much as possible, painting the Hugo results in apocalyptic terms using hilariously awkward, overwrought metaphors as some kind of crisis between fandom’s unelected tyrannical elite and the true majority of fans crying out for justice.

As I’ve previously pointed out, the reason the Hugo nominations were gameable in the first place is that Internet-based polls tend to favor those who are most willing to invest time and energy flooding said polls, which sometimes are the people who genuinely care most about the award but all too often are just shitty trolls.

Bruce Schneier, an expert on voting systems, computer security and science fiction got the rare opportunity to combine all three passions and talk about this back when it occurred; now that the voting statistics have been released you can look at them and see that the total number of people who nominated the “Sad Puppies slate” was a coordinated group of about 200-300 people.

Their nominations weren’t any more “authentic” than it’s the authentic will of a significant percentage of the American people for “Deez Nuts” to become President, or a 39-year-old 4chan user to be named Taylor Swift’s “biggest fan”, or for a module of the International Space Station to be named for Stephen Colbert.

They got away with it because the nominations process is much less publicized than the final voting--especially this year’s final voting, after what the Puppies had done had been publicized. In the final vote, in most cases the No Award votes outnumbered the votes for all of the Puppy nominees combined (for instance, there were 3,259 votes to give No Award for Best Related Work compared to 1,642 for every single work on the ballot).

Far from the narrative that the Sad Puppy slate was somehow the majority voice of fandom speaking out against a tiny elite clique, this Hugo Awards voting pool was the largest voting pool in history, and it was a voting pool that soundly rejected this reactionary “movement.”

It wasn’t just the numbers that told the story, though. The experience of being at WorldCon vs. reading about it online was like night and day.

My experience talking about social issues in geeky fandom online is one of constant attacks and sniping and arguing and “controversy”. If you clicked on the #HugoAwards hashtag Saturday night you could see a steady stream of 4chan-style obscenities, slurs and assorted nastiness from people not present.

There were, to be sure, plenty of personal beefs and political differences. I met many people I’d argued with online about various topics. Plenty of people had negative things to say about the response to the Sad Puppies, saying that other people had been too harsh or too hostile or too unhelpful in tone.

But defending the Puppies’ actions? Not a single person I met took that stance. The “controversy” didn’t exist outside the Internet. Everyone across the spectrum was united by sheer astonishment at how assholish the move to game the nominations was.

I’ve heard Puppies claim that Annie Bellet, who was nominated on the Puppies’ slate (without her knowledge), was pressured into declining her nomination out of fear of the all-powerful “SJW cabal”, of which I’m apparently a member. I saw no terror of Stalinist repression in her eyes when I hung out with her trading dead baby jokes at a party last weekend. Politically conservative authors like Larry Niven and Mike Resnick held meetups and readings without incident. Even Sad Puppy Lou Antonelli, who literally tried to call the cops on WorldCon guest of honor David Gerrold as an ugly, shitty prank, didn’t have his invitation rescinded (even though some, like me, called for it) in an effort to keep the olive branch extended.

I was, with some trepidation, considering amount of abuse I’ve received online talking about this stuff, scheduled to be on panel at WorldCon talking about diversity--what I ended up getting was large, interested crowds genuinely looking to discuss the issue in good faith.

Don’t get me wrong--the reactionary mob exists, and are dangerous. Antonelli’s stunt to try to get the cops called on the convention failed, but if it’d succeeded he’d be guilty of putting people’s lives in danger over his bizarre right-wing persecution complex.

But he was forced to apologize almost instantly once news of what he’d done got out, and he kept his head down for the whole weekend, because he was so very much alone in thinking this was justified.

I’ve had this experience before. I’ve played video games my whole life, my wife and I are together because of gaming--I proposed to her at a video game convention--and I was deeply sick at heart to watch the toxic elements in gaming turn into an ongoing, undying shitstorm over the past year.

But when I thought my “home convention”, the DC-area gaming and music convention MAGFest, might be spoiled for me forever I found out that even though the GamerGaters were frightening and unrelenting and loud on Twitter, they were totally absent at the convention itself and I was able to give a talk about resisting the reactionary culture GamerGate represents to a standing-room-only crowd that gave a standing ovation.

It’s an important thing to remember, especially on rough days when the Internet trolls are out in force. For all the benefits of greater interconnectivity it’s easily abused by people who leverage that connectivity to make their voices sound louder and scarier than they really are--people who are disproportionately politically reactionary white men, people who see change happening in the world and mobilize every dirty tactic they can to try to stop it.

It’s only on the Internet that the term “gamer” has become loaded with negative connotations thanks to a small, mobilized minority waving it as a battle flag to cause harm. At my old office job, in my life as a theater guy, among my relatives--I meet people who play games all the time, and all of this toxic inside-baseball politics is foreign to them.

Almost everyone I meet nowadays from whatever walk of life is a fan of some science fiction or fantasy franchise--none of them have even heard of most of the Sad Puppy participants except as names of jerks in news stories.

The mainstream world isn’t perfect, but it’s improving. Star Wars Episode VII is finally coming out, and with a diverse cast. We’re getting an all-female Ghostbusters. Last year we saw our first major science fiction award ceremony without any white male winners at the 2014 Nebulas. Last weekend I got to meet writers like Kate Elliott and Cat Valente and Ramez Naam who, regardless of whether they win awards or not, are writing books, making money and inspiring fans.

By comparison full-time Internet trolls like Vox Day are able to get their names in the news by eight entries from their tiny, ebook only, Finland-based self-owned publishing house no one has ever heard of. They can bask in the glorious attention from interviewers from mainstream media outlets and twirl their mustaches while cackling about their “390 sworn and numbered faceless minions” who let them game whatever polls they want. (A whole 390 people! Wow.)

But that’s not enough to dominate an industry. It’s not enough to spoil an in-person convention of real science fiction and fantasy fans. It’s not even enough to actually win the awards once enough people catch wind of what you’re doing. Outside of ambushing unprepared people on the Internet with sudden dogpiles--which, let me make clear, is not just annoying but abusive and dangerous--these people have almost no power at all.

So let them troll, let them explode in fury about how we’re all “Christ haters” and “Morlocks” on their blogs. Let them blow up piles of records and make endless egg accounts on Twitter and spam obscene gifs in the comments.

It’s not harmless. It’s awful, and we need to find much better ways to respond to it than we’ve been doing. But it remains true that the very nature of terrorism is to generate fear out of proportion to the actual power you wield, and to let terrorists dominate your conversation and your thoughts is the only way they can, in the long run, win.

So by all means continue fighting your battles in the present--I’m still an Internet flame warrior, despite it all, because lies need to be refuted and victims need to be defended and assholes need to be called what they are. But don’t make it more important than it is.

All they have is this one tiny, dingy slice of the present. The future is ours.