"Being black and gay in America both come with heavy doses of self-loathing": Actor Darryl Stephens opens up about typecasting, visibility and telling his own story

The "Noah's Arc" star spoke to Salon about his memoir "Required Reading" and being out, gay and black in Hollywood 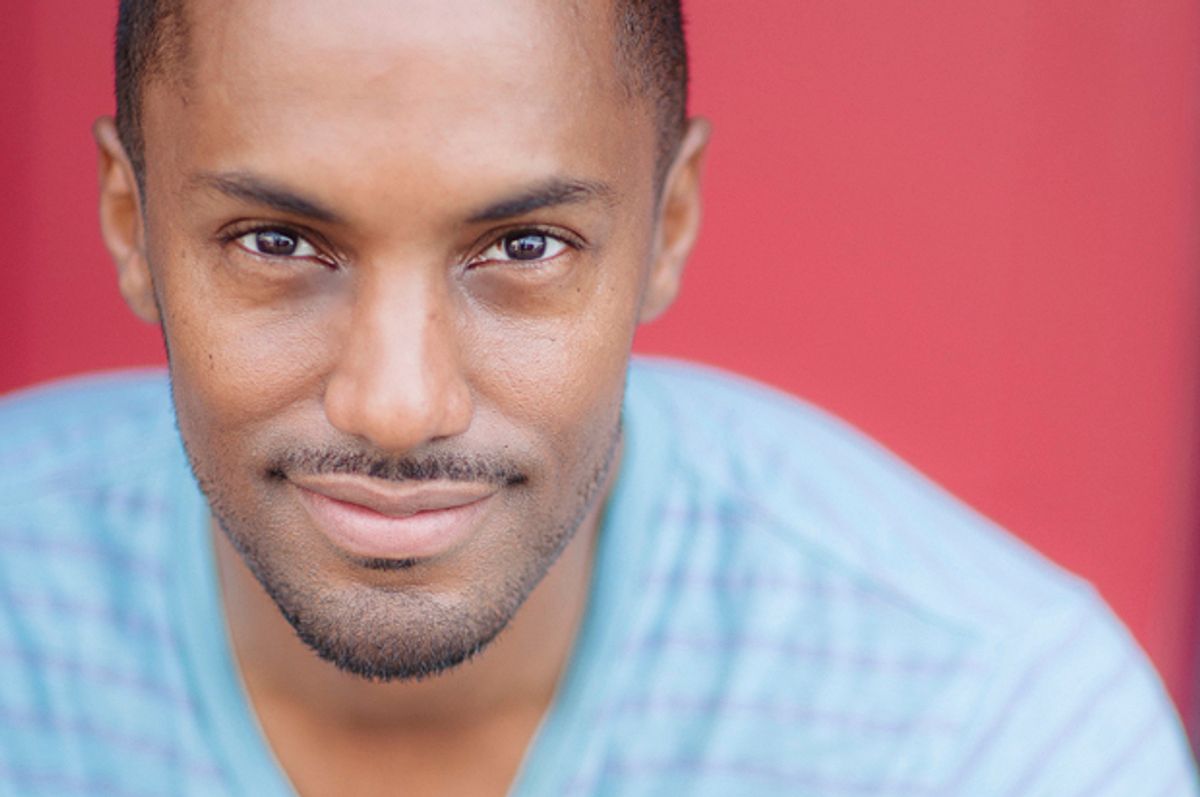 Self-described as “THE black, gay poster child,” with a signature part as the title character in the hit LOGO series “Noah’s Arc” and a sexy romantic leading role in the gay classic “Boy Culture,” actor Darryl Stephens found himself at a professional crossroad. On location, in 2007, for a big budget film, “BOLDEN!,” he thought he had to hide his sexuality from his co-stars, who it appeared to him were uncomfortable about “the gay thing.” This behavior was a complete reversal for Stephens, who once left his agents because they didn’t want him working on “another gay project.”

But then it hit Stephens. He was an icon to fans of “Noah’s Arc” and his films. If he wasn’t out and proud, how could other LGBT folks, who battle issues of self-loathing, find role models, or become educated about what being gay and black looks like? Throughout his career, which includes working on the series “DLTA,” and films like the recent “Beyond the Lights,” Stephens felt he had to justify and represent the community with “fair and honest” portrayals. His characters—from the fabulous, sissified Noah Nicholson to the hot, butch sex object he played in “Another Gay Movie”—inspired viewers as much as they drew criticism for playing up black and gay stereotypes.

Stephens, who is as charming and affable in person as he is on screen, has just published “Required Reading,” a compelling book that describes his experiences as an out, black actor in the industry. It is a wise, engaging memoir about self-awareness that touches on his personal and professional development: learning to embrace who he is, and not sell out by playing yet another sassy, black queen. He strives for dignity over empty celebrity.

Stephens, who previously published a wonderful novel, “Shortcomings,” is a writer who speaks candidly about the struggles he has both internally and with others. “Required Reading” is a revealing book, and one that offers advice and understanding about the minority queer experience.

The actor/writer, who should be better known and working more (hear that Hollywood?!), spoke with Salon about his life, his work, and his new book.

You write very eloquently in “Required Reading” about “respectability politics,” and not adapting to majority culture. Can you describe your observations on the topic?

I don’t think there was ever a decision that I was going to represent the underrepresented black gay man in America. I met with casting directors who were responding to calls and the characters I played were the roles. There were a lot of lessons about what people expected of us as black gay men, and I learned to have a thick skin about how black gay men are representing themselves. Everyone has an idea of what we should look like.

Look at Roland Emmerich and “Stonewall” (forthcoming in September): a white man imagined a story of a white kid who experienced this moment in history. Why is it always through the gaze of a white man? But we can only represent that which we can see and what we experience. It’s the importance of all of us sharing our stories. If the black trans person doesn’t tell their story, who will? It’s hard for Roland Emmerich to tell a black, trans story if he doesn’t know anyone to illuminate the details of that. It’s more about storytellers of color and transgender and female and overweight and differently-abled folks telling their individual stories so they can share in that knowledge. It boils down to the legacy we each want to leave.

On that same subject, there is an interesting anecdote in the book about your being tagged by an activist in a Facebook post about the series “Transparent.” Someone had a beef about a straight male actor playing trans. Can you explain what transpired?

I spoke with Janet Mock [the trans activist] about that. She wanted me to explore more of the cisgender actor angle. I was thinking, “What do I want people to take away from this?” It is: whatever part of the movement we are engaged in right now, we need to be sensitive to their experience, even if it’s the rich Republican who can afford all this plastic surgery. It’s important not to negate the things we don’t understand because we don’t understand them. Ultimately, what I think was problematic with that activist including me on that Facebook post, is that while I’m not trans, I have trans friends, and I have done the work to try to understand that experience. Like the white filmmaker who made “Tangerine,” who asked questions and tried to get to their truth with as little judgment as possible, there can be a shared experience of someone not living in the moment and illuminating it.

You write that you “refuse to be invisible” as an openly gay actor, but you struggle with being out in your career, specifically on the set of “BOLDEN!” Can you talk about this experience?

I was trying to illuminate the struggle gay black folks have in the world. So many black people are raised in the church and they are not welcoming of LGBT lives. There’s a tone—like on the set of that film, “BOLDEN!”—a vibe to my interactions that discourages conversations about being gay. It’s understood that if you are gay and you don’t mention it, we can be cool. I thought if I don’t say anything then I can get by. Most of that concern was on me. And I carried that concern into that environment. I based this on the way I grew up, the concerns people had about me coming out as an actor, and [an agreement we had] not to discuss being gay in the press for “Noah’s Arc.” So it was a personal fear. It was something I didn’t have a rational explanation for. I would get into a room with all these [straight] black men and my throat would close up on the topic.

You disclose that when you made “Noah’s Arc,” you had an agreement not to talk about your sexual identity with the media. Do you feel attitudes towards actors being out have shifted during your career?

When we made “Noah’s Arc,” every interviewer was asking: Are the actors gay or straight? Now, with Jack Falahee on “How to Get Away with Murder,” we know straight and gay actors can play straight or gay characters. It’s less an issue for the press. The culture is changing a lot, and you are seeing 12-13 year-olds coming out. There is no way I could have come out when I was that age.

Do you fear being typecast?

Are you a novelty or a type? That question continues to be relevant. Doris Roberts from “Everybody Loves Raymond” does a type. But we’re not seeing that type anymore. It’s important for actors to know—and you see this with stand up comics, as comedy [trends] shift and change—you don’t know when something is working, if the moment will continue. I get called in more often for sassy black queen roles. It’s learning to adapt. But I’m more a character than one type.

How do you think people see you, and queer black characters, when they are visible on screen?

You feel every time you see one, they have to represent. When I saw [Matthew St. Patrick’s] queer black macho husband on “Six Feet Under,” I thought: Is there nothing soft there? I love seeing all of the different types, and not prioritizing one over the other. Sissies can be powerful. The term “thug” has been co-opted by conservatives as term for a black male—but there is a clear admiration for hyper-masculine depictions of black gay men. Being black and gay in America both come with heavy doses of self-loathing. I think it’s extremely important for people who are taught explicitly or implicitly to think less of themselves, to have an alternate perspective. I wanted to be the best, most realized version of myself. I have had some self-loathing come up. You have to be honest in processing those moments. One of the gifts of being a gay man is to express our emotions, and that vulnerability of being raised that we are “less than,” and having to experience that, and work through that, and do it together, is important.

You also describe your impact as a role model and activist. There is a responsibility to your fans and yourself. How do you navigate personal and professional rejection?

It is artists’ and creatives’ nature to be insecure. It’s my assumption that things are easier for people who don’t create things for people to approve or disapprove. As an actor, you go on 50 auditions and maybe get 1 call back. You are programmed to expect rejection. I learned after making “Noah’s Arc,” that you are not always doing rewarding work. As a guest on a TV show, you stand around delivering lines. Being able to play Noah and speak to people on a visceral, unexpected human level…I did think that if I never work again, was it worth it? It was. If I never got another acting job, I felt the ways Noah empowered so-called sissies and men who are more sensitive than their parents or friends want them to be, it was so important and rewarding for me to illuminate the heroism and strength of living without fear and falling in love and doing what he wants without listening to what society dictates. We don’t know what we’re capable of until we see someone else doing it. I didn’t realize I could live openly and happily until I saw those characters doing it.

You write that you are not a name outside of your fanbase, but you have not been given too many opportunities to become better known. Can you discuss creating your own opportunities?

What it boils down to is that I don’t like sitting around waiting for someone to call me. I’ve been writing scripts and books and songs and telling stories and sharing emotional journeys. It’s getting my stories communicated even in a non-acting context. I am writing an original film and we’re figuring out how to market it for people to invest in it. It’s a part of a process I’m less familiar and comfortable with. But for me, it’s been a process of learning my strengths. Making “DTLA,” I got to write scripts actors were performing in front of me. I saw what worked. You get the experience by doing it. With “Noah’s Arc,” I never knew how to play a romantic lead. I was not getting the experience to show people what I’m like outside of “Noah’s Arc.” “DTLA” gave me that experience. I can also play this character given the opportunity. For artists like me, that is important, and with technology allowing people to create their own content, artists at my level are finding the value of that. You can’t expect [a film or TV executive] to see your credits and know what you do, what you sound like, how you move, and are you funny? That’s crucial. As a hungry actor, it’s been up to me. When I have time and resources, I’m all about writing and creating stuff I can shoot myself.