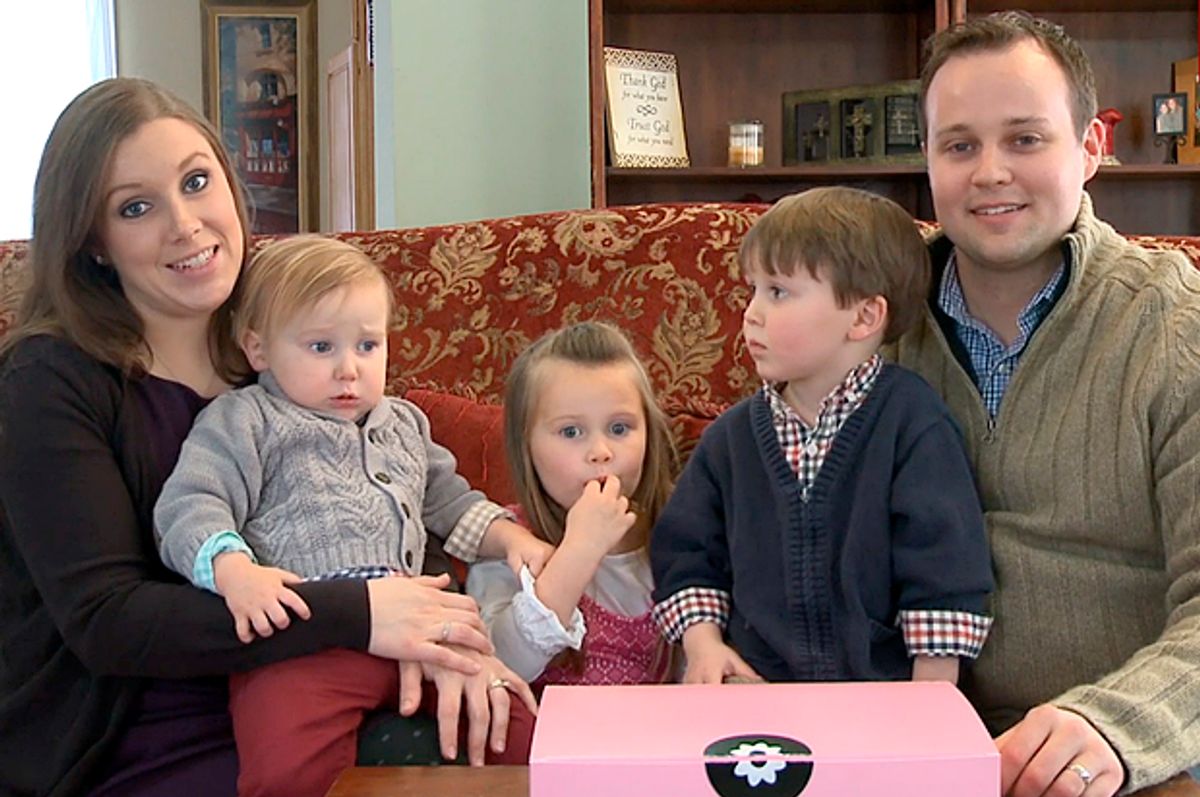 As if Josh Duggar’s latest scandal isn’t enough for his wife and the mother of his four children, Anna Duggar—including reports that he slept with a porn star while Anna was pregnant—now she’s being dragged into the mud as well. This week, former "Jersey Shore" cast member Nicole “Snooki” Polizzi, whose husband Jionni LaValle also allegedly had an Ashley Madison account, joined a chorus of voices urging Anna to leave when she said on her podcast "Naturally Nicole," “And his wife is still standing by him! It's like, 'What the f--k is wrong with you? Like, what are you doing?' Yep, screw it."

A source tells People magazine that Anna leaving the marriage is unlikely, given her upbringing and culture. “Maybe not publicly, ever, but privately, there will be some suggestion of whether or not she should have been more aware of the pressures Josh was under, of the issues he was facing, and how she could have better counseled him or helped him,” the source said. "She is fully and permanently committed to her marriage and her children. And she'll have the support of Jim Bob and Michelle and everyone else in their circle in terms of staying with him and making this work…Divorce is not even something that will be discussed."

While this may seem shocking given the magnitude of Josh Duggar’s lies, as mom Jessica Krammes Kirkland wrote in a letter on Facebook that’s since gone viral, it actually makes plenty of sense. “What is Anna Duggar supposed to do?” Kirkland wrote. "She can’t divorce because the religious environment she was brought up would blame her and ostracize her for it. Even if she would risk that, she has no education and no work experience to fall back on, so how does she support her kids? From where could she summon the ability to turn her back on everything she ever held to be sacred and safe? Her beliefs, the very thing she would turn to for comfort in this kind of crisis, are the VERY REASON she is in this predicament in the first place."

Is this disturbing? Of course. But are we truly helping Anna Duggar by telling her she’s making a giant mistake if she stays? Do we really care, or are we simply want to see Josh Duggar duly punished by losing his family? It’s one thing for Anna Duggar’s siblings to lobby for her to divorce her husband, but for those outside the relationship, it’s not only not helpful, but rude and shaming to attempt to tell her what she should do, especially in a seemingly no-win situation.

According to sex and relationship expert Dr. Tammy Nelson, author of "The New Monogamy: Redefine Your Relationship After Infidelity," there are five main reasons women stay with a cheating spouse: they have become victims and don’t know how to leave, the cheater needs help, they are trapped financially, the affair is a wakeup call that spurs them to rededicate themselves to the marriage, or the wife simply doesn’t want to leave.

“Why are we so quick to judge the wife who stays? It is almost as if she is at fault as much as the cheater,” Nelson told Salon. “As a culture, a wife who stands by her cheating man is seen either as weak and foolish, as a sucker who will eventually be cheated on again, or as someone who is being taking advantage of.”

According to Nelson, “There are three phases of recovery after an affair: the Crisis phase, the Insight phase and the Vision phase. Right now Anna and Josh are in the Crisis phase. If they were in my office, I would tell them they are still in the Crisis phase and not to make any major decisions right now. It is more important that they take care of their children and themselves, and when they are more stable emotionally and after they are in therapy for a while, both individually and couples therapy, they will eventually go into the Insight phase. At that point they will understand more about how this happened and why. And when they are ready to create a vision for their future, then and only then will Anna be able to make a decision about whether she wants to stay or go.”

There’s a difference between criticizing the culture Anna Duggar grew up in and the mindset that may lead her to believe she has no choice but to stay, and criticizing Anna herself. The former tackles the broader system, the latter placing individual blame on a woman who’s likely struggling to figure out what her life will look like from now on. As Laura Turner wrote at Religion News Service:

“When I read that Anna Duggar is unlikely to leave her husband, I know why. It’s because she feels that she doesn’t have a choice. If she did choose to stay, after months of prayer and marital counseling that held Josh responsible for his actions, her decision might have some integrity.

But this is mere days after she found out that her husband had been cheating on her and having sex with strangers — all while proclaiming the value of family.

This false forgiveness is too often the result of the pressure ‘professional Christians’ feel to forgive when they are in the public eye.”

Obviously, Anna Duggar’s specific circumstances are highly unique. But I don’t think any of us can truly know what we would do if a spouse we loved and were devoted to turned out to have cheated, and the ways we talked about women like her matter. When anyone, whether it’s Snooki, you or me, pretends to be above the fray and know what the right steps for Anna Duggar to take are, we’re putting pressure and responsibility on her that are more harmful than helpful. There is no “obvious” solution here, because no outcome is going to restore her marriage to what she thought it was.

This is a very different narrative than we’ve seen around another woman in the spotlight whose husband cheated on her: Hillary Clinton. In her case, the fact that she stayed and has gone on to have a successful career and is running for President, is seen by many as an asset. She made the best of a bad situation and emerged even more powerful. As historian William H. Chafe, author of "Bill and Hillary: The Politics of the Personal," put it in an interview, “I think you can not be surprised but still be rocked. I think that she was always aware of the likelihood that he was carrying on one-night affairs. When those became politically explosive, as happened on many occasions, certainly never more so than with Gennifer Flowers in 1992, she really had to decide how she was going to respond. What she did was to decide to save her husband, to rescue him.”

But saying that she “should” leave is no better than saying that she shouldn’t. There are ways to express support for Anna Duggar, as this open letter from Homeschoolers Anonymous does, without pretending to know what’s best for her.

I agree with what relationship expert Nelson told Salon about Anna: “If she is staying, she will need support and she will need to care for herself and her children. Meanwhile, hopefully the ‘experts’ like Snooki will focus on their own relationships at home. Like all of us, it takes energy to have a good marriage, and none of us can afford to judge other people for theirs.”