Dick Cheney's staggering Iran hypocrisy: Why we need to ignore his sinister war games at all costs

The former vice president is saying whatever he can to torpedo negotiations with Iran. Here's what he's not saying 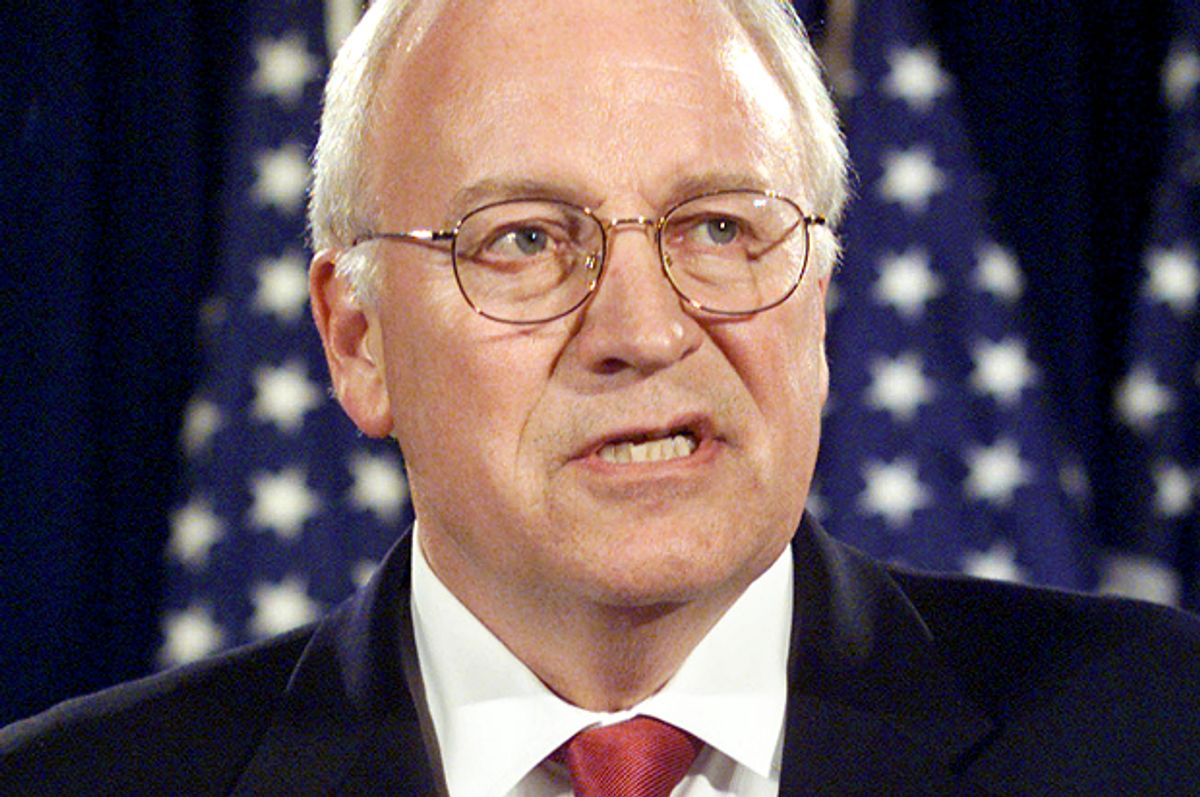 The photo accompanying a Washington Post article published yesterday, which reported on a letter signed by nearly 200 Generals and Admirals opposing the Iran deal, showed Lt. General William "Jerry" Boykin. This matters because Boykin took part in Operation Eagle Claw, the failed 1980 attempt to rescue the Americans taken hostage in the embassy in Iran. More recently, Boykin played key roles running the Bush Administration's covert operations, ultimately serving as one of DOD's top intelligence officials. He's best known for a 2003 speech he gave in uniform, pitching the War on Terror as a crusade against Satan. "We're a Christian nation, because our foundation and our roots are Judeo-Christians. ... And the enemy is a guy named Satan." Boykin's inclusion on the letter associates the opposition to the Iran deal with his Islamophobia, though the vast majority of those who signed the letter have no such stain on their record.

Two other signatories -- John Poindexter and Richard Secord -- offer perhaps a more troubling indicator of how familiar the propaganda campaign against a nuclear deal with Iran is. Both men were key players in -- and then National Security Advisor Poindexter was tried for -- the Iran-Contra scandal. Thus, these two men, who claim that an agreement to forestall nuclear weapons would "enable Iran to become far more dangerous [and] render the Mideast still more unstable," were key players in doing just that, back when they armed Iran in the 1980s.

Again, most signers of the letters aren't notorious for their extra-legal efforts to sow chaos in the Middle East for fun and -- in Secord's case -- profit, but the involvement of Poindexter and Secord taint the effort nonetheless.

Above and beyond the involvement of these unscrupulous figures, there is one attempt to defeat the Iran deal that actually does discredit all others: former Vice President Dick Cheney's plan to give a speech at American Enterprise Institute on September 8, one week before Congress will vote on the deal.

Before joining the Bush Administration, Halliburton CEO Dick Cheney opposed sanctions against Iran because American businesses would be "cut out of the action" (Halliburton is still one of the biggest likely beneficiaries of the easing of Iran sanctions).

Cheney spent much of the Obama Administration thwarting negotiations with Iran at a much earlier stage in its nuclear program. Had those negotiations happened then, they might have mitigated the concerns he and others now express about the nuclear deal. Indeed, as Poindexter had years earlier, Cheney's office reportedly worked back channels to undercut the Iranian regime just as negotiations began.

Cheney's real contribution to the Iran situation he claims to despise, however, was in championing a war against Iraq to undercut Weapons of Mass Destruction -- including a nuclear program -- that didn't exist. The war created a vacuum of power in the region and a Shia-led government in Iraq, both of which Iran managed to exploit to increase its regional posture. While railing against Iran, Dick Cheney made it stronger. At the same time, the Bush (and Obama) Administration's successful regime change in Iraq and Libya, but not in North Korea, showed the value of a nuclear program as a deterrent against US-led regime change.

Dick Cheney played a big role in raising the stakes of a deal with Iran, while also making it much harder to achieve.

Which brings me to the really nutty thing about Cheney giving a big speech -- on September 8 -- to oppose the Iran deal: Cheney, and the deal opponents in general, are working on precisely the same propaganda schedule they did to pitch the Iraq war.

George Bush's first Chief of Staff, Andy Card, once famously explained the logic behind the fall 2002 campaign to launch a war in Iraq. ”From a marketing point of view, you don’t introduce new products in August.”

Admittedly, the timing here, in which commentators release a constant flow of fear-mongering throughout the summer, only to accelerate as Congress returns to DC in September, was dictated by the timing of the deal itself and previous delays that gave Congress 60 days to review the deal, as well as Congress' own schedule.

That's the 13th anniversary of the day when he and Condoleezza Rice took to the Sunday shows and kicked off the campaign for the Iraq War in earnest. To justify it, they pointed to a newly published New York Times story that repeated "Bush Administration officials'" claims that Saddam Hussein had sought aluminum tubes destined for a nuclear weapons program. The story even quoted an unnamed senior administration official calling for urgency.

'The question is not, why now?'' the Times quoted someone who by description could be Cheney or Rice, among others. ''The question is why waiting is better. The closer Saddam Hussein gets to a nuclear weapon, the harder he will be to deal with," the anonymous top Bush official said, kicking off a campaign that would lead to a catastrophic war that has only increased instability in the Middle East, leading to the rise of ISIS and other problems the U.S. still struggles to deal with.

Cheney echoed that line on Meet the Press: "We're at the point where we think time is not on our side." Rice went further, explaining away any uncertainty about the intelligence that would in the following decade prove to be utterly wrong, "We don't want the smoking gun to be a mushroom cloud."

Cheney plans to make a case against the Iran deal -- and what many believe would leave few options besides war -- on the anniversary of the most discredited example of propaganda of recent history.

Cheney may not be calling for war and regime change this time -- at least not explicitly (though that may well remain his favored option). But when he claims the deal will "put us closer to actual use of nuclear weapons than we’ve been at any time since Hiroshima and Nagasaki in World War II," as he already has, people should remember that Cheney made the same claims 13 years ago, to the day.

Dick Cheney, the Vice President who cries about nukes the way a little boy once cried wolf, plans to do so again on the anniversary of some of his most discredited claims.