Jeb Bush is losing, and the GOP establishment has no one to blame but itself

Elites are indicting Jeb Bush for Donald Trump's success. But if they want culprits, they should look in a mirror 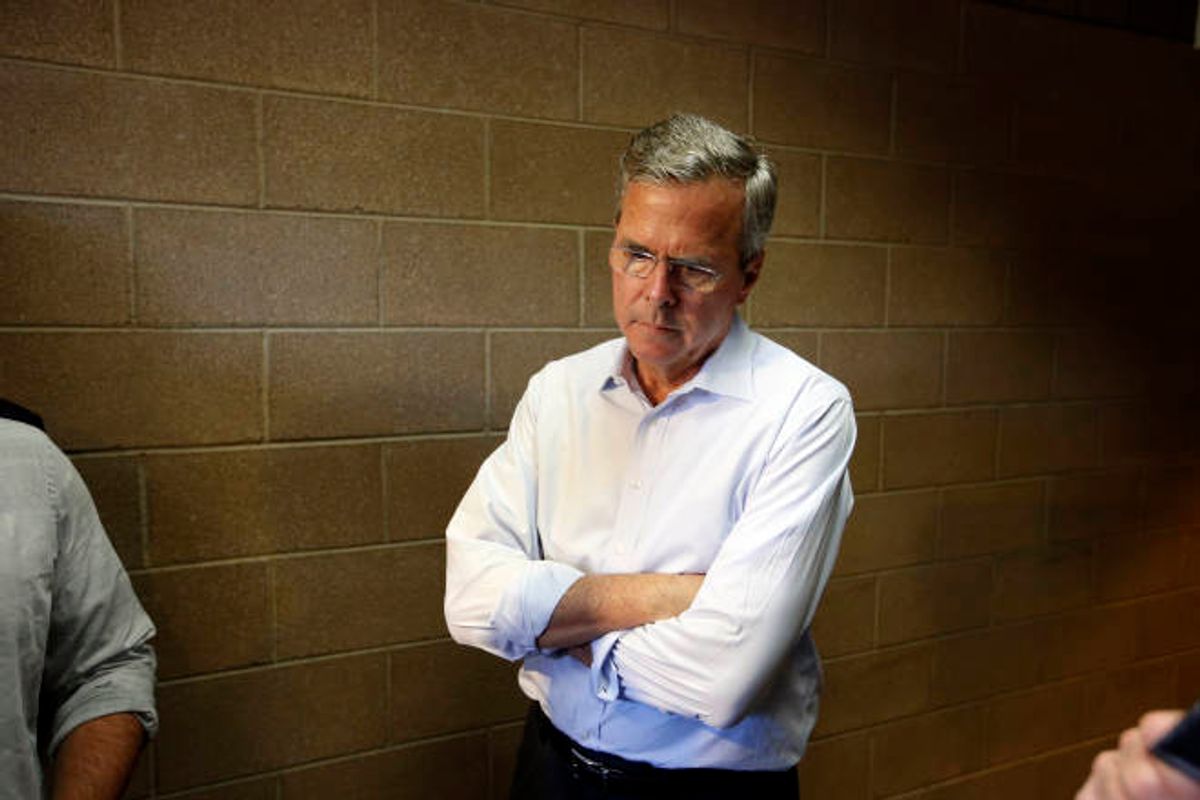 With polls showing Donald Trump in a better position than ever, and with the next presidential debate still nearly a month away, now appears to be the summer of the Republican Party donor class’s discontent.

Their favored candidate, Jeb Bush, has been (obsessively) tagged by Trump as a “low-energy person.” And Bush’s attempts to nab some of “The Donald’s” presumably invigorating xenophobia have been embarrassing, to say the least. For the CNBC-watching plutocrats who comprise “the establishment” of the Republican Party, the summer has been, if not quite a disaster, certainly a mess.

For the Very Serious People in U.S. punditry, however, the situation may be even worse. If you’re the kind of elite hot-taker who tries to understand Republicans by watching “Morning Joe” and reading George Will, Trump’s ascendancy undermines your entire political worldview. It seems to validate the liberal claim that GOP voters care more about whiteness than free markets. And it suggests that the Wall Street Republicans you rely on for insight into the GOP don’t have a clue.

All of which is to say that it’s no surprise to find Yahoo!’s Matt Bai, the unofficial high priest of conventional wisdom, reprimanding Bush in his latest column for his (incompetent) attempts to sound more like Trump. But, as is often the case with Bai, he’s got his cause-and-effect all wrong. He warns that Bush is “losing” the primary, but the truth is that Bush’s struggles — like Trump’s triumphs — are the product of conservative ideology itself.

Specifically, it’s the fault of Citizens United, and the tidal wave of outsider spending that it’s unleashed on American politics. If it weren’t for that essentially limitless outsider spending, there would likely be considerably fewer candidates in the GOP race. And if there were fewer candidates in the race, Bush would have an easier time joining together those Republicans who do not want to nominate Trump.

Remember, Bai is correct to note that Trump’s “zenith” in the polls is around 30 percent. He goes too far when he argues that “more than a dozen serious competitors” are splitting the anti-Trump vote; it’s difficult to imagine a Ben Carson, Mike Huckabee or Ted Cruz supporter picking Bush. But he’s still right to think that if Trump-haters added Marco Rubio’s 7.3 percent, Carly Fiorina’s 6 percent, John Kasich’s 4.5 percent and Chris Christie’s 3.5 percent to Jeb’s 9.8 percent, they’d have a real challenger.

If the race suddenly became a duel between Bush and Trump, I’m honestly not sure that Bush would win. Trump could reasonably expect all or most of Ben Carson’s 10.3 percent, Ted Cruz’s 7.3 percent, Scott Walker’s 7.3 percent, Mike Huckabee’s 4 percent and Rand Paul’s 3.8 percent to come his way. But at the very least, Bush’s de facto position as the anti-Trump would make him seem bigger and more formidable than he does right now, stumbling as he is between dullness and inadequacy.

Either way, it’s something of a moot point. As things stand, Bush cannot distinguish himself from the rest of his “establishment”-friendly competitors, so he ends up looking like just one of the dozen-plus candidates who are not Donald Trump. Worse still, because Bush has already raised such an unfathomable amount of money for his super PAC, his inability to stand toe-to-toe with Trump makes him look in comparison not only drab but also weak. And there’s no one Republican voters hate more than the weak.

Of course, that massive war chest is also a consequence of unlimited spending. The great irony, however, is that these new rules are, for Bush, something of a double-edged sword. On the one hand, they helped him make waves with eye-popping fundraisers. But on the other hand, the objective of those much-publicized big numbers, intimidating other candidates from entering the race, failed for the exact same reason. After all, you can run a campaign now with just a single mega-donor “sugar daddy.”

This doesn’t mean that Bai is entirely wrong about Bush. As my colleague Joan Walsh has been rightly noting for a while, “Jeb!” has been a straight-up bad candidate. He’s repeatedly done exactly what he shouldn’t. It has been 13 years since Bush last won an election, and one gets the sense that, when he wasn’t cashing checks from Lehman Brothers or hanging out with Michael Bloomberg, he spent the time forgetting everything he’d learned.

But it’s possible for two things to be true. Bush can be both a bad candidate and be wounded less by his own hand than by the results of conservatism itself. The men and women (but mostly men) in the Republican Party can rail against Bush to the Matt Bais of the world all they want. It won’t change the fact that when the Citizens United ruling was handed down and forever changed the rules of American politics, they were cheering as loud as anyone else.