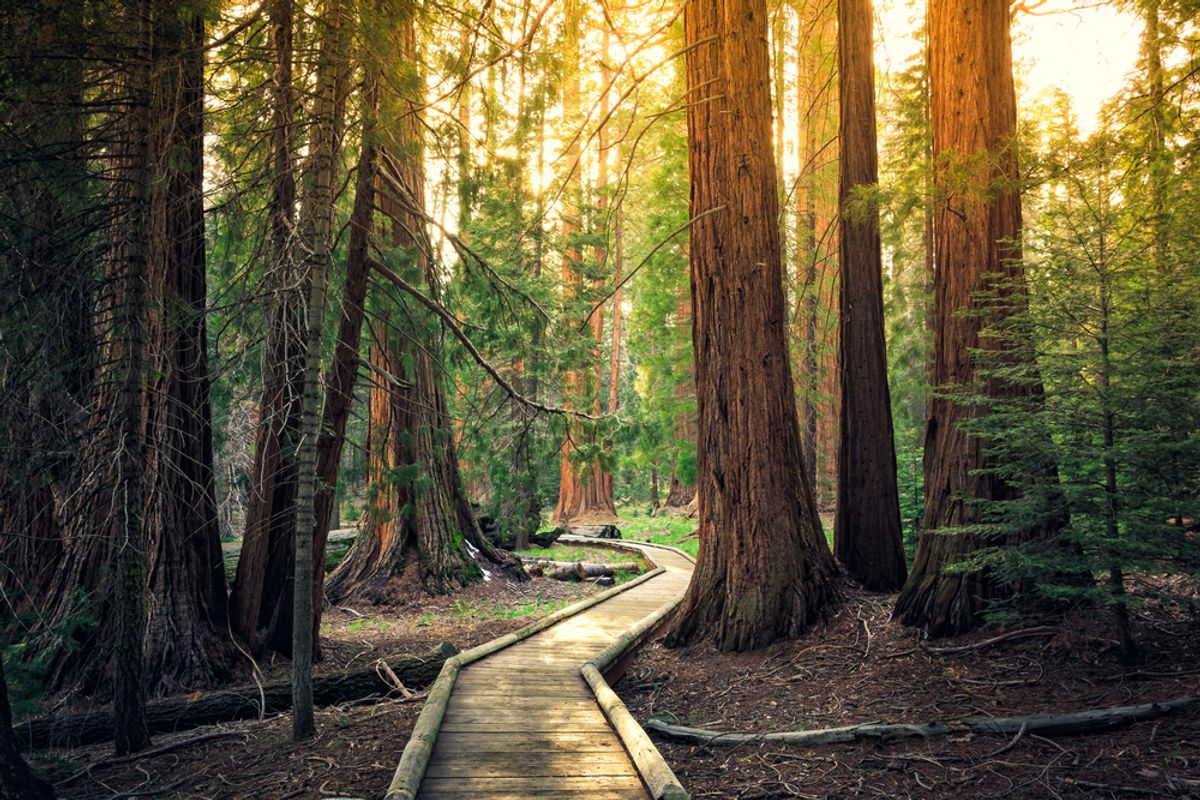 Two Republican bills currently making their way through Congress should anger any American who cares about the nation's forests. Introduced this summer, both bills are pro-industry and anti-environment — and seek to eliminate the public participation in federal decisions about forest management that could negatively impact local communities, ecological health and wildlife.

The first one, HR 2647, the Resilient Federal Forests Act of 2015, was introduced by Rep. Bruce Westerman of (R-AR-4). It passed the House and is now under consideration in the Senate. The other, S 1691, the National Forest Ecosystem Improvement Act of 2015, was introduced Sen. John Barrasso (R-WY). Hearings were held last month by the Senate Committee on Energy and Natural Resources, which is chaired by Sen. Lisa Murkowski (R-AK), who has consistently supported corporate interests over the environment. Both bills would suspend or weaken several federal environmental laws, clear the way for the timber industry to dramatically increase commercial logging across U.S. National Forests.

Introduced on June 4, HR 2647 is a pro-industry bill that seeks to streamline the process by which commercial logging projects are managed by the federal government. One of the ways it wants to accomplish this is by limiting public debate on timber projects, effectively excluding the American public from their legal right to generate and review agency actions regarding forest management. HR 2647 appears to favor the rubber-stamping of industrial logging projects in National Forests by establishing several worrisome environmental review requirement exclusions from such projects. These exclusions would effectively remove critical opportunities for American voters to participate in governmental decisions regarding how forests are managed by federal executive departments such as the Department of Agriculture (USDA) and the Interior Department.

Outdoor Alliance, a non-profit coalition of seven member-based organizations that represents the interests of millions of Americans in all 50 states who enjoy the nation's outdoors, said that the bill "elevates a single interest — timber — over the diverse activities that take place on National Forests, including recreation."

This measure shortcuts critical public participation requirements for management decisions on National Forests and BLM lands that have the potential for severe negative impacts on outdoor recreation, the outdoor recreation economy, and conservation values. Public lands management requires a balanced approach to sometimes-competing uses and values; this bill upsets this balance and inappropriately limits the ability of a full array of stakeholders to participate in the management process and, where necessary, initiate judicial review of agency actions.

In the letter, Cramer recognized the importance of the timber industry, but also pointed out the fact that the outdoor recreation economy — which depends on the health of and access to the nation's forests — is "responsible for $646 billion in consumer spending annually and directly employs 6.1 million Americans." He called on Congress to set aside legislation that "unfairly and unnecessarily harms opportunities for public participation in forest management decision-making."

Cramer also expressed his disappointment that HR 2647 fails to fully address the problem of the persistent lack of funding for wildfire suppression — an issue that has been fastidiously contemplated in S 235, the Wildfire Disaster Funding Act of 2015, a Senate biil introduced in January that currently enjoys strong bipartisan support and which has been praised by a broad coalition of conservation, timber, tribal and recreation groups, including the Outdoor Alliance, Wilderness Society and the Nature Conservancy.

HR 2647 was co-sponsored by 13 representatives, all of whom are Republicans, except one: Rep. Ann Kirkpatrick (D-AZ-1), who has been called out by the League of Conservation Voters for over a dozen anti-environment votes since 2009.

Senate launches it own forest attack

Introduced on June 25, S 1691 seeks to "establish a reliable and predictable timber supply from the National Forest System that can be harvested, processed, and sold as wood products." Like HR 2647, the Senate bill hands power to corporate timber interests while excluding the voice of the American voters and reducing environmental safeguards.

Last month, Mike Matz, the director of U.S. Public Lands at the Pew Charitable Trusts, gave testimony on the bill to the Senate Public Lands, Forests and Mining Subcommittee, chaired by the bill's sponsor, Sen. Barrasso. Matz said that Pew is unable to support the bill in its current form, saying that the legislation "would undermine key provisions of the National Forest Management Act of 1976 (NMFA), the Endangered Species Act (ESA) and the National Environmental Policy Act (NEPA) … [and] inappropriately limit citizen access to the federal courts."

Similar to HR 2647, the bill would require anyone who files a lawsuit challenging forest projects still subject to judicial review to post a bond equal to the anticipated costs, expenses and legal fees of the U.S. Forest Service as a defendant. As litigation costs can be exorbitant, this provision effectively prevents the majority of individuals and organizations from access to the courts on matters of forest management.

Additionally, a provision in S 1691 allows for the clear-cutting of up to 5,000 acres of national forests with limited environmental review on the impacts these operations would have on water and land quality. LIke its House counterpart, the bill seeks to give a freer hand to corporate timber interests in pillaging America's forests for profit while ignoring science, conservation and public input. In concluding his testimony, Matz called on Sen. Barrasso to "craft a forestry bill that more adequately balances the needs of national forests and the communities and wildlife that depend upon them."

An assault on forests, threatened species — and taxpayers

The Earth Island Institute's John Muir Project (JMP), a non-profit forest advocacy group named after the famed naturalist and founder of the Sierra Club, sharply criticized both bills. The group highlighted how the architects of these bills have capitalized on the public's fear of wildfires and have used the ongoing myth that wildfires are not part of a natural and ecological process. In fact, wildfire are necessary not only for forest health, but for the survival of many species, several of which are threatened.

"Anti-environmental Republicans, joined by some Democrats from logging regions, are attempting to use the public’s fear and misunderstanding of wildland fire to mount one of the most extreme attacks ever on our National Forests," the group says. "Their views are outdated and scientifically inaccurate. The evidence that has been gathered over the past decade shows that (a) large mixed-intensity fires are ecologically beneficial, (b) we now have far less mixed-intensity fire in forests than we had historically, and (c) patches of high-intensity fire create 'snag forest habitat,' which supports levels of native species richness and wildlife abundance that rival or exceed those of old-growth forest."

One native species that has been harmed by the scientifically unsound practices of post-fire logging and fire suppression is the California/Oregon and Black Hills subspecies of the Black-backed woodpeckers. In 2012, JMP and the Center for Biological Diversity filed a petition to list this rare bird as threatened or endangered under the ESA to protect it from further habitat loss.

"One pair of Black-backed woodpecker generally needs at least 200 acres, typically with at least 100 standing fire-killed trees per acre, on average, in order to have enough of their prey — native wood-boring beetle larvae which live under the bark of fire-killed trees — to survive," according to JMP. "Once relatively common, before fire suppression and post-fire logging, this species is now extremely rare, and there are no meaningful protections for its habitat on either public or private lands. It is estimated that as few as 1000 pairs remain in California (600 pairs)/Oregon (400 pairs) with less than 500 pairs remaining in Black Hills of South Dakota."

Rachel Fazio, JMP's associate director, told AlterNet that the California spotted owl is "adversely affected by both green-tree thinning (which destroys or degrades both nesting and foraging habitat) and post-fire logging (which destroys its preferred foraging habitat) — both of which tend to result in territory abandonment." Last week, Sierra Forest Legacy and Defenders of Wildlife filed a petition to list the California spotted owl under the Endangered Species Act.

JMP argues that these bills, by "dispensing with environmental review, oversight by the courts, and doubling or tripling logging levels, will only mean further threats to these species and an overall reduction in native biodiversityin both green and burned forests."

"Let's face it," said Fazio, "Anyway you cut it, these bills would be devastating for imperiled wildlife species."

The group asserts that these bills will not only "cost taxpayers many millions, if not billions of dollars," but also "perpetuates the myth that fire is not a natural process." The end result of these bills, they warn, "will be harm to native biodiversity and increased costs to taxpayers while a few towns and mills in the west enjoy a couple of subsidized boom years."

Muir, an early advocate of wilderness preservation in the United States known as the father of the national park system, wrote in his journal that "the clearest way into the Universe is through a forest wilderness." If the GOP lawmakers get what they want, that path may soon become a thing of the past.