The modern news conference is a scripted farce: Why Jorge Ramos' badgering of Donald Trump was a necessary corrective 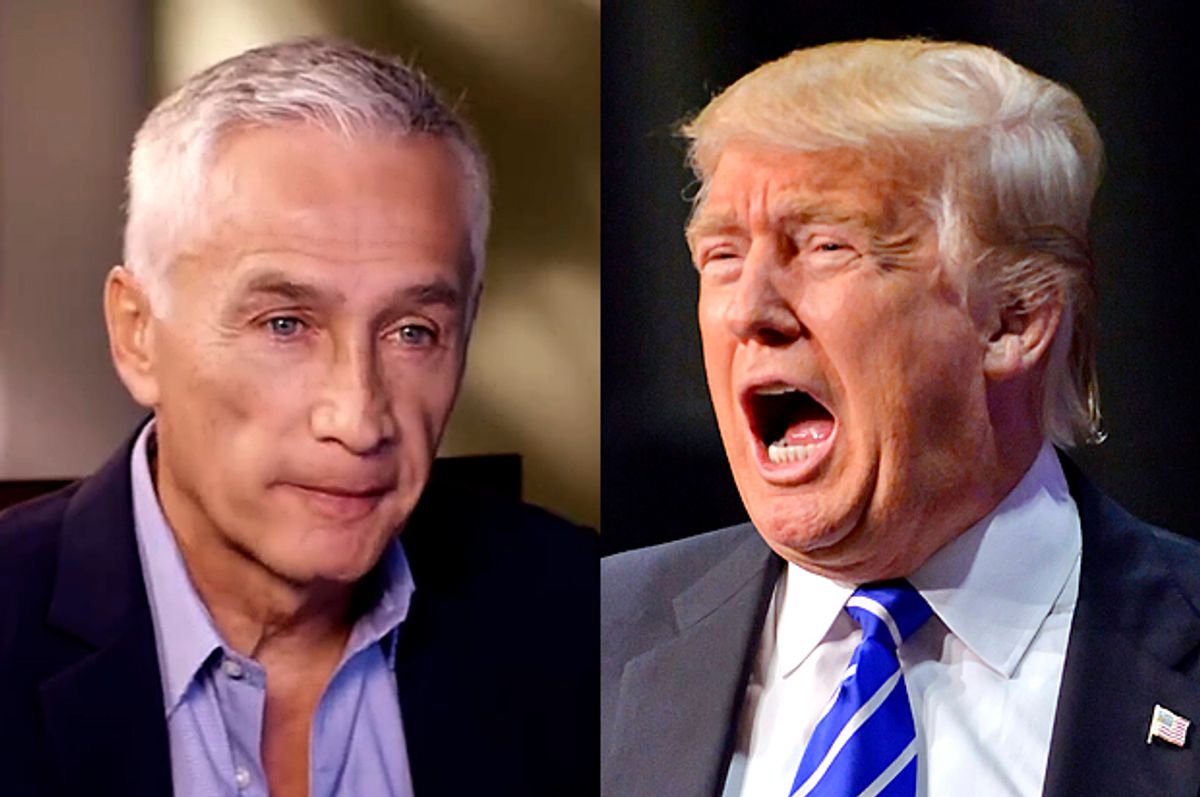 When I heard that Donald Trump had booted Univision’s Jorge Ramos from a press conference on Tuesday in Dubuque, Iowa, I couldn’t wait to watch the indignant response of the other journalists in the room.

That’s because I was ejected from a press conference many years ago in Louisiana, where I was political writer for the Shreveport Journal. A quirky, minor candidate for the U.S. Senate – Larry “Boogaloo” Cooper – took offense at my questions. He angrily ordered me to leave the room. I got up and left. When I reached the lobby, however, I was pleasantly surprised to find that the other journalists had followed me. In solidarity with a fellow reporter, they had all walked out on the petulant candidate. The press conference was over.

As I started the Trump video, I wondered, how would Ramos’ colleagues in the press respond? Having once been on the other side of the podium as a press secretary for several prominent elected officials, I should not have been surprised by what I saw – but I was. As one of Trump’s security guards hustled Ramos from the room, nary a reporter followed him in protest. In fact, no one immediately objected or questioned Trump about the incident.

After an awkward pause, the reporters went back to the business of politely raising their hands, waiting like trained seals for Trump to call upon them. They continued asking him questions, dutifully recording his answers and tweeting them to their readers. CNN continued to broadcast the event, no doubt gleeful about the drama and the extra viewers the incident would attract.

Sure, the assembled later mentioned that Ramos had been ejected and that Trump had told him to “go back to Univision.” But they stayed in the room. They didn’t protest as Trump tossed one of their colleagues from a press conference. (Finally, one journalist did speak up. MSNBC’s Kasie Hunt valiantly asked Trump to readmit Ramos. He did.)

The next day, however, Ramos had few defenders among the news media. MSNBC’s “Morning Joe” co-host Mika Brzezinski observed that Ramos made the room “awkward and uncomfortable with other reporters.” On CNN, Chris Cuomo arrogantly lectured Ramos: “It’s his press conference. He runs the rules. You jumped the queue.”

On Fox News, Jesse Watters of “The Five” observed, “Ramos acted like an illegal alien and got treated like one. He cut the line, was disruptive and then was deported and then Trump let him back in.” In a column, Fox’s Howard Kurtz complained, “Ramos broke in without being called on—and I’m sorry, that’s not some polite society rule, that’s basic civility when a presidential candidate is taking questions.”

“Sorry” is the right word, but only to describe the collective media behavior during and after the episode. It confirmed what many of us already know: American political journalism is a pitiful, cowardly shell of its former self.

Every week, political blowhards appear on the network news shows to spout their very predictable talking points. The hosts rarely subject them to uncomfortable questions. “Ye gads,” I imagine them thinking, “ what if I pissed off John McCain and he refused to come on my show again?”

Sometimes I wonder if we are just two steps away from these “news” shows finally morphing into a Barbara Walters interview. (“Senator, if you were a tree, what kind of tree would you be?”)

The political press conference was once a high-stakes affair. The president or some other political figure would enter the room, girded for pitched battle with the assembled journalists. There was sometimes true drama as the reporters jumped up, shouted, threw sharp elbows and muscled themselves into position to fire tough questions at the president or a candidate.

In most cases, no one knew who would be called upon. As a young journalist, I was always intrigued by the skillful ways some older reporters made sure their questions were answered. In the cacophony of voices, one blustery questioner always prevailed. He or she was the loudest, asked the most concise question or, most often, was the person still shouting when the other journalists had finished their questions.

Sam Donaldson, the famously aggressive White House correspondent for ABC News (1977-89, 1998-99) was never awed or cowed by the presidents he covered. “In our business,” he said in a 2002 interview, “it seems to me, when you’re dealing with public officials, your job is to try to make them explain their programs and defend their policies. And, to get them to defend their policies and programs and their future course of action with an answer which is owed to the general public, you have to require them either to answer or to make it clear that they’re not going to do so. I don’t know that such questions are tough, but they should be direct and they should have a point.”

Donaldson wasn’t the only tough questioner of his era. Anyone under the age of 40 might be shocked to see how CBS’s Dan Rather questioned Richard Nixon at a 1974 press conference in Houston.

In those days, being a White House correspondent or covering a presidential campaign was a plum assignment and an exciting adventure. Working the White House beat was the pinnacle of a political journalist’s career.

Gradually, however, the spinmeisters took over. During the Reagan years, press conferences and other official presidential appearances became elaborate stage-managed events. Instead of leaping to their feet and shouting to catch the president’s attention, the Reagan press office began to impose order to the encounters between president and the journalists. Reagan would call upon them, granting them permission to pose their questions. The journalists grumbled but largely acquiesced.

Even the name of the event has gradually changed. Once, everyone called them “press conferences.” Now, they are often known as “news conferences.” In other words, they are no longer meaningful clashes of the reporters and the politician, during which the politician is expected to answer tough questions. They are, instead, opportunities for the politician to make news with his or her tightly scripted, well-rehearsed statements. They are vehicles for a message, pseudo-events manufactured by the politicians.

For this, we can partly blame the candidates, who skillfully tamed the journalists who cover them. The campaigns restrict their access, corral them like cattle, feed and water them like horses, provide comfortable rooms where they write their stories and arrange their travel and hotel rooms. In other words, the candidates accommodate and govern almost every movement and moment of their days.

If the reporters cause trouble – if they annoy the candidate or her staff with unreasonable demands or overly hostile questions – campaign staffers can make life much less comfortable for them. Their phone calls go unreturned. Their requests for interviews are denied. They receive no invitations to ride along for an hour in the bus or RV with the candidate.

And when one of their own is booted from the room for not playing by these well-established rules of political journalism? Well, they just keep their heads down and continue taking dictation.