"I don't know what ass you're pulling that out of": Bill Maher talks climate change with invented-stat-quoting Rick Santorum

"Let's talk about facts," Santorum said, before proceeding to make statements containing nothing of the sort 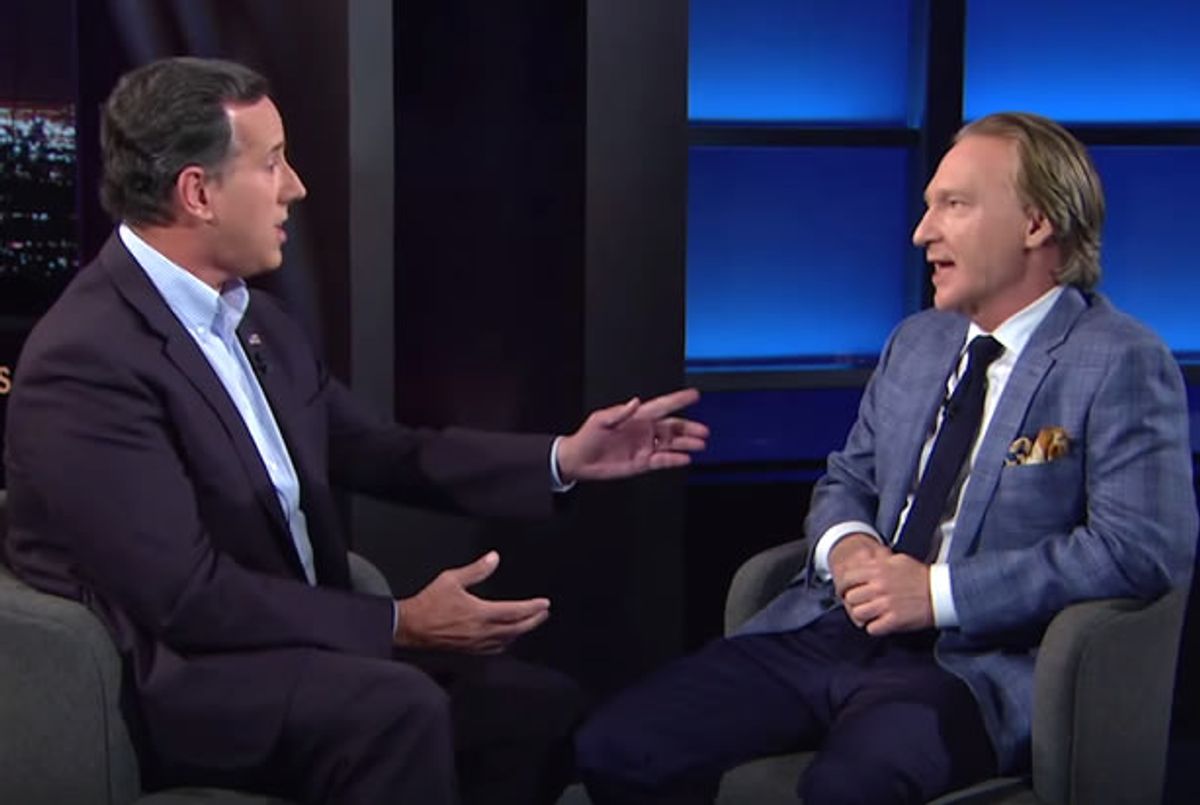 On "Real Time" Friday night, Bill Maher sat down with former Pennsylvania senator and current presidential hopeful Rick Santorum for a discussion that quickly devolved into yet another reminder of why this man will never hold the highest office in the land.

On the subject of anthropogenic climate change, for example, Santorum quoted a study in which 57 percent of 1,800 scientists allegedly claimed that human activity isn't responsible for fundamentally altering the world's weather patterns.

"I don't know what ass you're pulling that out of," a bemused Maher replied. "But that is not -- you know that is not true."

"I'll send you the survery!" Santorum replied. He then proceeded to "debunk" the claim that 97 percent of scientists believe in anthropogenic climate change, saying that that number was "pulled out of thin air," and that not even 97 scientists responded to the survey from which that conclusion was drawn. Because, of course, it didn't occur to Santorum that sequentially claiming that a statistic was invented and following it with a complaint about the sample size used to derive is a good way to win an argument.

"So let's talk about facts, lots of things cause climate change," Santorum said. "Look at what the president's proposed, an 80 percent reduction in emissions, and the consequences of that to folks I'm running my campaign, who are blue collar Americans, who are losing jobs to China," he was saying, before Maher interrupted him.

"There are twice as many jobs in solar," he said, "you're living in the past." Maher later noted that "the Pope made a very strong statement on climate change, my position, not yours -- and your position when you heard that was 'let's leave the science to the scientists. First of all, [this interview is proof] you're not doing that, but second of all...he's the vicar of Christ, shouldn't you listen to what he has to say?"

Santorum argued that Maher was misrepresenting the context of the Pope's statements, which are meant to "challenge" the Catholic faithful, not be a means of guidance for them.

Watch the entire interview below via HBO.