Our modern tech monopolies made billions and transformed the economy in different ways, but this was the base 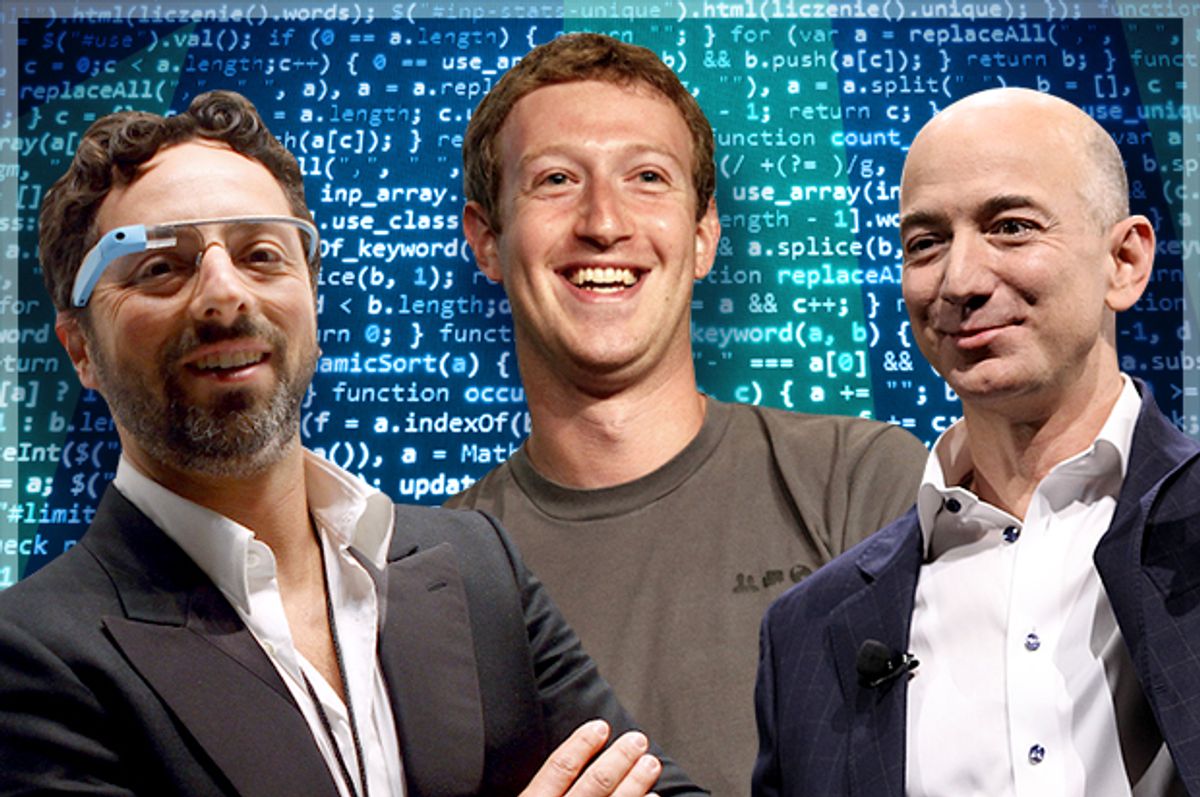 Excerpted from "Wealth Secrets of the One Percent"

Did Bill Gates intend, when he set out, to exploit the extraordinary economies of scale in software—which, unlike perhaps any other type of business, occur on both the supply and demand sides? It seems likely. In the 1970s, his corporate motto was “We set the standard,” and at the beginning of the 1980s, he forecast that a “natural monopoly” was possible. It appears that Gates at least intuitively understood this principle of software economics before anyone else.

Did he also know that by basing his monopoly on intellectual property rights he would render it all but immune to effective anti-trust remedies? This seems less likely. After all, having a monopoly is the secret ambition of every right-thinking businessperson. Probably Gates, in his eagerness, simply did not consider that, a decade later, governments would act against him. Indeed, when they did, Gates was outraged because he believed that the antitrust laws were designed to protect consumers and that he was giving consumers better products at no additional cost. If Gates had anticipated the governments’ attack, surely he would not have used the words “natural monopoly” in a public forum.

Still, Gates’s exploitation of economies of scale was without a doubt a stroke of wealth secret genius. It would not take a genius to copy Microsoft, of course. But then, because of intellectual property laws, no one can copy Microsoft; that is the whole point. Still, a very smart person could probably emulate Bill Gates, applying his approach in another market. And in Silicon Valley, very smart people are not in short supply. Among the wealthiest individuals in the world, platform strategies—usually based on intellectual property rights protections—are well represented. Nearly all of the dot-com billionaires in the top fifty spots have gained limited monopolies or appear likely to gain such monopolies in the future, and investors are backing them generously in the hope that they do so. Most of their companies (Apple, Oracle, Google, Facebook, Amazon) have been accused of antitrust violations. But even when the antitrust cases have gone against them, the basis of these monopolies in intellectual property has limited the effectiveness of remedies. Many have been forced to pay fines or disclose key technical details to competitors, but none in a way that would enable direct replication of their core products or services.

First among the companies that rule the dot-com roost is still Microsoft, which produced not only the $76 billion fortune of Bill Gates and the $19 billion fortune of Steve Ballmer but also (narrowly outside the top fifty) the $16 billion fortune of Paul Allen—about $111 billion in personal wealth in total. Google comes next, exploiting the network effects inherent in search and developing the web’s premier advertising platform (producing the $32 billion fortunes of Larry Page and Sergey Brin in the process). Google is followed by Oracle, whose founder, Larry Ellison, has a fortune of $48 billion. Oracle’s platform is in business software and hardware (where Microsoft is uncharacteristically an underdog, although gaining rapidly even as it cedes share to Apple on the consumer side). Mark Zuckerberg’s Facebook follows, with perhaps the most straightforward network-effects strategy (the more people who join Facebook, the more valuable the site is as a place to connect—and to advertise within). But simple strategies can be good, and his fortune is now estimated at $29 billion.

Of course, there are many other such strategies used by famous names in the technology sector. In the 1990s eBay boomed with a network-effects business model that increased in value the more buyers and sellers it attracted (and despite recent difficulties, the site continues to monopolize the online auction space). Twitter’s social messaging network was one of the leaders of the second wave of Internet companies, and more recently the messaging network WhatsApp famously landed itself a $19 billion valuation in only five years (by virtue of its 450 million users, which acquirer Facebook evidently judged to be an insurmountable “network effects” lead in online instant messaging).

Amazon, the famous name in high technology I have omitted until now (founder Jeff Bezos’s fortune is $32 billion), initially struggled to attain profitability. It was a retail operation, so there were no network effects to speak of, and while its virtual storefront meant its costs were lower than those of many retail competitors, the company did not benefit from the snowballing economies of scale of companies like eBay. However, user ratings (now ubiquitous on websites) did provide a platform for buyers to create value.

And by 2005, after many twists and turns, the company was widely recognized as a leading exponent of platform strategies. For instance, Amazon enables third-party sellers to reach buyers on its website and third-party marketers to be compensated for advertising products sold on Amazon. Moreover, in recent years, the supply-side economies of scale inherent in retail (essentially, the ability to use one’s size to squeeze the profits out of suppliers, as with Circuit City) have also begun to kick in, enabling Amazon to both undercut its competitors and (occasionally) turn a profit.

Amid these rising fortunes, the debate on what to do about these modern monopolies created by intellectual property law continues to rage. One approach, of course, is to drastically reform intellectual property law—perhaps going so far as eliminating patents, as Boldrin and Levine have advocated. Alternately, one could update antitrust remedies so that there was some way to break up intellectual-property-based monopolies (as they broke up Pierpont Morgan’s Northern Securities Railroad and Rockefeller’s Standard Oil). Timothy Wu, a professor of law at Columbia University, advocates a “separations principle,” which would split companies into content creators, distributors, and hardware makers. And yet, because such approaches would presumably at a stroke destroy much of the stock market value of the U.S. and global high-technology sector, they seem profoundly unlikely to be implemented. Indeed, the likelihood diminishes as the value of intellectual-property-based companies continues to grow.

The only other alternative is, roughly speaking, some form of conduct remedy. If you are a monopolist and you have the misfortune to reach the remedy phase of an antitrust trial, when you hear the term “conduct remedy” you start screaming and jumping up and down and hugging and kissing your family members and especially your lawyer. Because a conduct remedy means your monopoly stays essentially intact.

The approach with the greatest backing is usually called “neutrality.” The idea is to pass laws that give everyone equal access to the networks of the new monopolists. For instance, Google could be prevented from manipulating its search formula to disadvantage competitors, which is called “search neutrality.” Policies to make social media accounts portable to other providers are called “social media neutrality” (in a world of social media neutrality, you could move your Facebook account seamlessly to Google+ or LinkedIn as easily as you move your telephone number). While President Barack Obama threw his weight behind these approaches, and some “neutrality” measures seek to undermine network effects, in general the more effective they might be, the more challenging they would be to implement. And so, in all likelihood, the billions will continue to roll in (the most successful effort thus far has focused on “net neutrality,” which targets old-school telecoms and cable companies, not dot-com companies).

So the real question is, how can you get your own intellectual property monopoly worth billions of dollars?

Of course, if there were a simple answer to that question, I would be strangling competitors and consumers with my monopoly and rolling around naked on gold coins like the emperor Caligula. That said, there are a few pointers that can be gleaned from the successes and failures of others:

• To make money in software, you need a platform. There are lots of application developers, but they don’t tend to make too much money (remember Corel WordPerfect? Remember Lotus Notes? Remember—and you are really dating yourself here—VisiCalc?). Microsoft’s breakthrough was to create one of the first software platforms—initially DOS, and then Windows—which brought together users on one side with application developers on the other. Platforms enjoy indirect network effects, because the money other companies invest in creating applications for your platform add to the value of your platform. These network effects, along with economies of scale in software production, are what lead, joyously, to monopoly.

• Displacing a platform is hard; complementing one is easier. If you have a lot of money (like Apple) you may well want to try to take on Microsoft directly. The advantage of displacing a platform is that you know there is a lot of money there—Bill Gates’s house proves it. It’s tempting to just go straight after that monopoly. The problem is, you are then competing not just with the money and technology embodied in Windows but also that embodied in all the applications written for Windows. So you might instead want to try building a complement to an existing platform that then becomes a platform in its own right. For instance, the Internet browser Google Chrome runs on Microsoft Windows, but then itself runs various applications. Even Apple eventually decided that it was better off attacking Microsoft with complements (the iPad, the iPod, the iPhone, the iWatch) than via a full frontal assault.

• Software is not the only area where platform strategies apply. For instance, credit cards are a classic example of a non-software-based platform. Credit cards bring together consumers on the one side and merchants on the other, and network effects apply: the more consumers use a card, the more merchants will want to join the card’s network; and the more merchants accept the card, the more consumers will want to use it. The thing you must be careful of is that people generally carry more than one credit card. This means that the market doesn’t tend naturally toward monopoly. It’s better than perfect competition, but it’s still sort of competitive. The same is true of video game systems, where no single company has a monopoly (because the average gaming household has something like 1.4 video game machines). This is also what killed MySpace—people could create more than one profile, which was fun but meant no monopoly (in contrast to Facebook, where each person generally has only one profile). If you want to pursue platform strategies, it’s best if each user uses only one of your type of product (Facebook can be a little relentless in trying to force you to use your real name, but you would be too if your monopoly depended on it). The fact that most people use only one personal computer is what made Microsoft’s monopoly possible and makes Microsoft so hard to displace.

• Until a monopoly sets in, competition in platforms is unbelievably complicated. It used to be that everyone in the software business thought first mover advantage was the key—the platform that got the largest number of users, and therefore the greatest network effects, most quickly, would win. It turned out that this wasn’t the case. One reason is that platforms have two sets of customers. For instance, Microsoft’s customers for its Windows operating system are both computer users and application developers. The application developers aren’t suppliers, as you’d expect in a traditional business, because Microsoft must attract them to develop applications for Windows. The winning platform is the one that manages to simultaneously appeal to both sets of customers, which is a delicate balancing act. Hence platform markets tend to evolve more slowly, and earlier advantages are more vulnerable, than you might expect. Creating a winning platform is therefore a bit like playing a game of three-dimensional chess while blindfolded.

Excerpted from "Wealth Secrets of the One Percent" by Sam Wilkin. Published by Little, Brown and Co. Copyright © 2015 by Sam Wilkin. Reprinted with permission of the publisher. All rights reserved.