The Catholic Church's mafioso fantasies: Why the Pope really isn't so different from "The Godfather"

While Christianity has pretensions of piety, its actual behavior would make Don Corleone blush 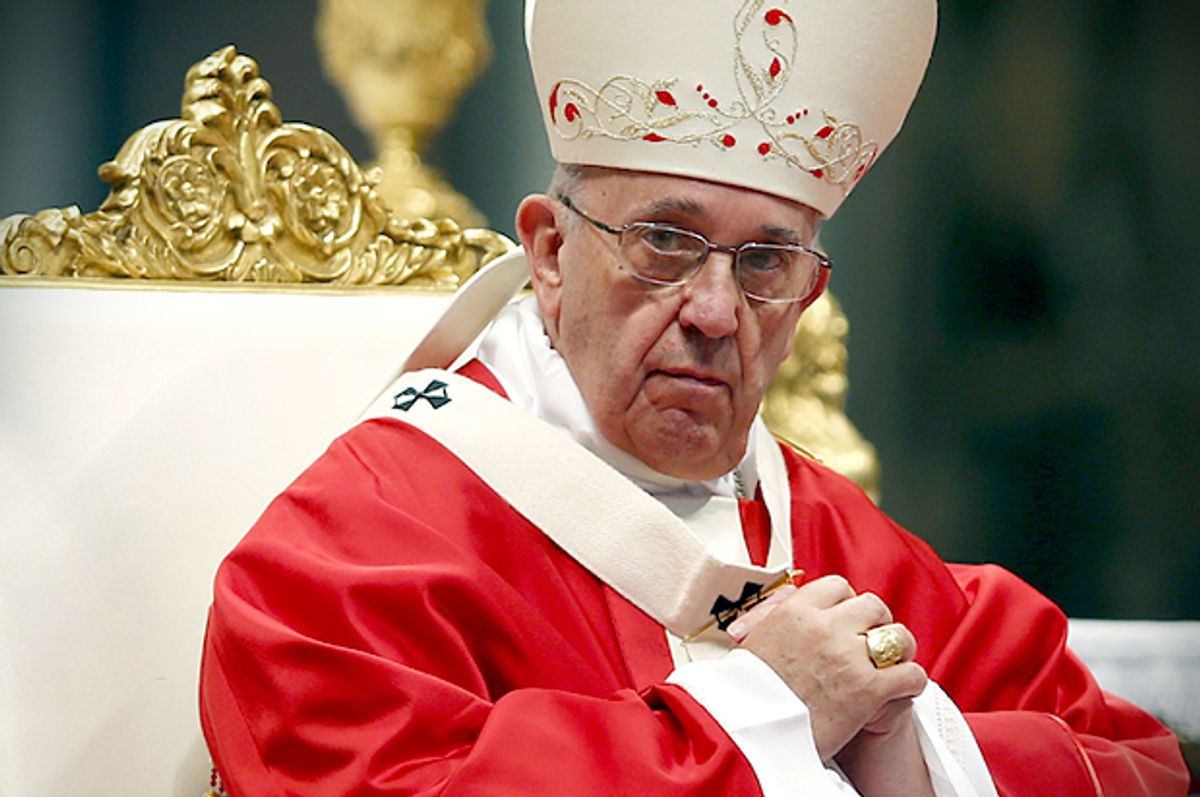 Can it be a mere coincidence that God figures in the first part of the moniker of the most celebrated (fictional) Mafia boss in history, Don Vito Corleone? Certainly not. The similarities between the two are just too striking. A fearful despot with a well-known penchant for ordering the use of violence against his subjects, of whom he demands absolute loyalty, love and obedience -- well, that certainly describes both Don Corleone and the Lord Almighty.

Most importantly, both are made up, though at least the former has real-life counterparts.

Leave aside for a moment Mario Puzo’s iconic (nominally Roman Catholic) gangster, and consider how often we think of the seemingly benevolent, if rather insipid, noun “godfather” without recalling that it denotes the performance of a superstitious ritual enacted by priests on defenseless babies; that the Catholic clergy has a lengthy, established record of depraved child sexual abuse; that the Vatican has long employed, aided, abetted and sheltered child-raping priests; and that the Vatican has also been implicated in Holocaust profiteering, Mafia-linked bank scandals, money-laundering schemes, and monk-perpetrated financial scams. Don Corleone could only have dreamed of committing crimes on the scale on which the Vatican operates. He claimed territory (at least fictitiously) in a borough in New York. The Holy See has the whole world as its domain -- and for real.

Given all that, it should come as no surprise that the Catholic Church lent its imprimatur of legitimacy (valid at least among the faithful) to the funeral in Rome earlier this month of a purported Mafia boss -- Vittorio Casamonica, who allegedly headed the Casamonica clan operating in the city -- and did so in a style of which Francis Ford Coppola would have been proud. On August 20, with the "Godfather" theme song piped in through loudspeakers, and a helicopter hovering above, dispensing red rose petals, Casamonica’s hundreds-strong funeral procession, headed by an ornate, horse-drawn hearse bearing his coffin, made its way through the streets of the capital to the Church of San Giovanni Bosco, the façade of which had been festooned with portraits of the smiling mobster set against Saint Peter’s Basilica, dressed as the Pope and wearing a crucifix around his neck, with captions seemingly designed to taunt the authorities. (“You have conquered Rome, now you will conquer paradise,” and “King of Rome.”)

The message could not have been clearer: Though Rome is in the midst of a major anti-Mafia, anti-corruption probe, the Casamonica clan let Italy know that it was unbowed, proudly open for business, and enjoying the favor of none other than the Lord Himself. This, obviously, constituted a brazen challenge to the state. Angelino Alfano, the minister of the interior, is demanding of the prefect to know how such a procession could have taken place, and the prefect is asking the same of the local police chief, but our attention should focus on Reverend Don Giancarlo Manieri, the parish priest who authorized the funeral and officiated at it.

“Would I do the funeral of Vittorio Casamonica all over again? Probably yes,” said the reverend, absolutely unrepentant. “It’s wasn’t up to me to block a funeral,” he added haplessly.

Except that it was. The brave anti-mafia chronicler (of “Gomorrah” fame) Roberto Saviano pointed out in a tweet that the Catholic Church refused to perform the last rites for Piergiorgio Welby, a prominent advocate of euthanasia and the right to die (both anathema to the Catholic Church), yet granted Casamonica a funeral “with great pomp and circumstance.” One assumes that poor Welby had neither the wealth nor the power of Casamonica to induce the Church to part with what passes for its principles. The Church, and organized religion in general, are all about wealth and power.

This was not the first time Mafia kingpins in Italy have made their final journey with the blessing of the Catholic Church, but I don’t recall the American press as having considered the matter worthy of coverage before. The New York Times and other papers published articles describing the event, invariably highlighting the "Godfather" music played and the helicopter. None drew the obvious comparison between God and criminal underlords. Nor did anyone, to my knowledge, mention that the Catholic Code of Canon Law does indeed permit priests to bow out and refuse funerals, if the deceased is a “manifest sinner”; hence, the “hapless” reverend was not so hapless after all. Moreover, the Pope has specifically declared mafiosi “excommunicated” and urged them to “publicly convert,” so one might wonder just what his minions were doing giving a clan boss such a lavish send-off to the otherworld.

Somehow, though, notwithstanding the Pope’s admonitions, mafiosi don’t seem to be beating a path to their local church’s gates to ask forgiveness. Surely, deep down, they know that if you strip the Pope of his frock and beanie, he is just another run-of-the-mill mortal, his minatory pronouncements void of any enforcement mechanism. Quite possibly, they also understand that the Lord and His “Judgment Day” are nothing but bugbear fantasies that priests fob off on the gullible to scare them into submission.

In this regard, it’s worth remembering the words of that famed seminary school dropout, the infamous, cunning (and yes, atheist) Soviet dictator Joseph Stalin. When, during WWII, Churchill urged Stalin to maintain good relations with the Vatican, Stalin interrupted him and dismissed the issue. “How many divisions does the Pope of Rome have?” he asked. Obsessed with threats to his rule, Stalin nevertheless knew he had nothing to fear from that quarter.

But isn’t Pope Francis a figure to be admired? Isn’t he “modernizing” the Church? Is he not progressive, or at least more so than his predecessors? This is what the media have been telling us. After all, he rails against capitalism, talks of helping the poor, welcomes refugees to Europe, urges the protection of indigenous peoples, and even shows some tolerance toward gays. Moreover, he has just issued an encyclical recognizing the dangers of anthropogenic climate change that perturbed the faith-apologist New York Times columnist David Brooks, so he must be doing something right. Right? Oh, and crowds of Americans are preparing to welcome him during his visit to the United States next month, and snapping up commemorative papal baubles, magnets, “Papal Pleasure beer,” even papal mozzarella cheese in his honor. Plus, what about his admission last year that the Big Bang and evolution really took place? Doesn’t he deserve a round of applause?

No. Though even some Catholic priests themselves link celibacy to their enduring penchant to molest children, and despite well-founded reports that he planned to abolish the sacerdotal celibacy requirement, the Pope has not done so. He is not about to ordain women as priests. No matter how many millions of Catholics die in Africa of AIDS, he is not changing the Church’s anti-contraceptive policy. (Nor will he bless artificial contraception.) By opposing family planning, he thereby condemns much of his “flock” to perpetual misery; for the only proven way to reduce poverty involves empowering women to decide if and when they would like to have children. And just after France suffered the Charlie Hebdo massacre at the hands of Islamist terrorists last January, the Pope came out strongly, even pugilistically, against freedom of expression as far as religion goes.

The record shows it: The Pope stands firmly on the side of medievalism, and proudly carries on the destructive, sexist, anti-child, anti-free-speech policies of his predecessors.

In view of his pig-headed, doctrinaire rigidity in continuing policies that ruin millions of lives, his acceptance of the Big Bang and evolution seems like a footnote – and a repetitive one. (An encyclical issued in 1950 had already endorsed what scientists had long ago discovered.) Scientific advances and the spread of scientific knowledge about the origins of our universe and our species owe nothing at all to the Catholic Church except delays and obstructionism. We do not, in short, need the Catholic Church (or any other faith institution) for anything.

The gruesome, final-reckoning execution scenes of “The Godfather” take place to the melodious resounding of church organs, as a priest is baptizing Michael Corleone’s son. An alleged crime boss receives a quasi-beatification in Rome. As we’ve just seen, neither is a coincidence. At the heart of both the Mob and faith lies darkness.

As regards the latter, the fully beatified Mother Teresa said as much in her private diary, where, we learned after her death, she admitted that try as she might, when searching for God she found “nothing, but emptiness & darkness.”

Come on, Pope Francis, set a salutary example for us all. Doff the beanie, ditch the frock, and fess up to what you know to be true: There is no God, there was almost surely no Jesus, and if there was, he was not the son of a deity, but a primate like yourself and the rest of us. And if you’ve kept abreast of what researchers tell us, you also must know that Christianity is being exposed as a farrago of fables, with accounts of the key events described in its “Holy Book” based on no evidence whatsoever.

Once you’ve come clean, we nonbelievers would welcome you to sane, civilized society with open arms. Unlike our wrathful father who art not in heaven, we are a forgiving, reasonable bunch.