Whales, otters, sharks and seals are all turning out for the "Superbowl of nature"

M. Sanjayan talks to Salon about "Big Blue Live," and the incredible story of an ecosytem's recovery 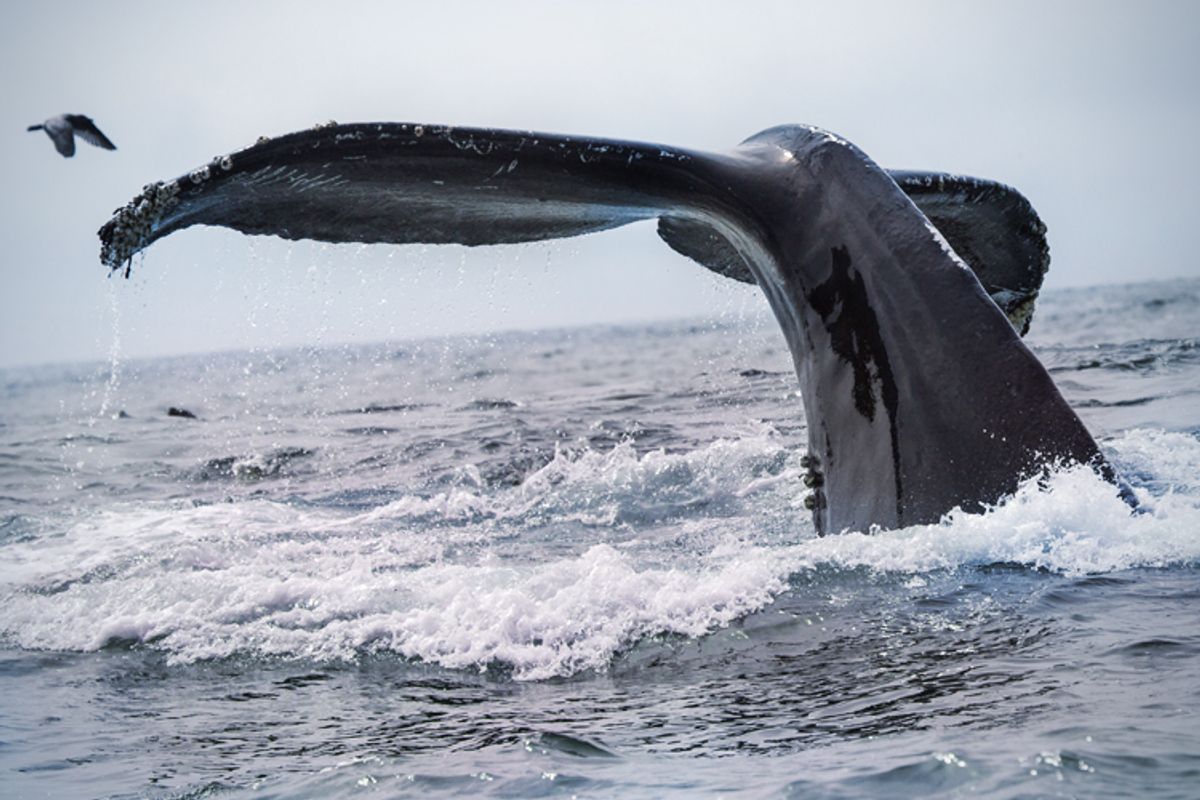 Monterey Bay is a diverse marine ecosystem located south of San Francisco, best known for its aquarium and for its frequent appearances in the writing of John Steinbeck. And right around this time of year, it turns into an all-out marine mammal extravaganza. Krill attract sardines and anchovies, sardines and anchovies attract larger animals, and next thing you know it's just seals and sea otters and whales and dolphins and sharks and the whole, spectacular thing is going to be broadcast live on PBS next week.

The three-night event is called "Big Blue Live," although conservationist M. Sanjayan, one of the program's on-air correspondents, is calling it the "Superbowl of nature." And while there are unlikely be any scantily-clad sea otters trying to sell you Budweiser, it just might live up to the name.

But the coolest part of the story isn't just that a bevy of scientists and cameras will be there to document, in real-time, the bay's surging life. It's that up until very recently, there was barely any life to document, and much of what remained was on the verge of extinction. Sanjayan spoke with Salon about how Monterey Bay went from being an overexploited disaster to a model of ecosystem resilience, and gave us a preview of what to expect starting Monday night. Our conversation has been lightly edited for length and clarity.

I've been out to Monterey, but never for this event -- can you describe for me what's going to happen, and why it's so remarkable?

Having been to Monterey Bay, you know it's an incredible bay, and it used to be filled with wildlife. Over the past, say, 50 years, and really over the past 30 years, we've seen a resurgence of wildlife. The bay, today, is in better shape than it would have been 50 or even 100 years ago. And that's kind of an amazing thing.

But what makes this event so special is that Monterey Bay is right on the edge of a very deep underwater canyon. It's a place where very deep ocean water comes very close to shore. No other place in the United States has that kind of feature -- it's basically like being at the edge of the Grand Canyon. That cold water coming in from the deep this time of the year, stirred to the surface by winds, brings with it lots of nutrients, which then feed sardines and anchovies, which then in turn attract these ocean giants to this area. Nowhere else on the planet do you have such a gathering of big marine wildlife in this concentration and, luckily for us, with some predictability.

So to back up, what led to the disappearance of the wildlife to begin with?

Monterey Bay, since the French and Spanish discovered it -- and even before that, with Native American people -- has been incredibly important, economically. But once the traders got in here, the fur traders, in particular, in the late 1700s, they first wiped out sea otters -- they killed them to send the pelts to Chinese nobility, actually, who would wear them as a status symbol. A single pelt from an otter could have bought you a small house in the Bay Area, just to put it in perspective.

Whales were heavily exploited -- this is a major whaling station -- and then once they ran out of whales, they went to seals and sea lions -- they virtually killed all the elephant seals that have ever lived on this coast -- and then they went after the fish. You know Cannery Row: In 1945, which was the peak catch year for sardines, they caught enough sardines in one year that if you stacked them end to end, it would go to the moon and back.

So by the '60s, basically, they'd worked this bay to death. They'd basically taken everything they could from the ocean. The good news is that ocean is resilient, and left alone, it started coming back. But in 1992, this area became a National Marine Sanctuary, which really brought all the parties together: it brought the fisherfolk, it brought the community, environmental organizations, the government, all together to come up with a shared vision for this place.

And it has worked. A report just came out from the National Marine Sanctuary basically saying that some parts of the bay are in near-pristine condition. As a wildlife ecologist, I travel the world over, and nearly every place I go, I always think, "Wouldn't it have been amazing to be here 100 years ago?" Not so in Monterey Bay. It really is to me a story of redemption -- for nature, but also for people.

You say a lot of this recovery just came from nature being left to its own devices, healing itself, but you also just described an enormous amount of destruction -- were there ways in which these stakeholders actively worked to restore the bay, also, or was it solely a matter of being hands-off?

No, it was proactive. First of all, the Marine Mammal Protection Act afforded great protection for whales, seals, sea lions and sea otters -- from a small population of 50 [sea otters] that were thought to be extinct but were rediscovered very close to Monterey Bay, the population today is about 3,000. There are probably 300,000 sea lions now in California, again, recovered by the Marine Mammal Protection Act.

The second is the fishing industry became better understood, better regulated, better marketed. Today, fishermen really operate under a principle of sustainability; they want to be here for the long run, we want them to be here for the long run, and it's really finding that common ground where they can make a living without exhausting the resources. It's watching what we put into the bay. And then, of course, the Monterey Bay Aquarium, which really has become a focal point for conservation, along with Stanford and U.C. Santa Cruz, which are both operating here and are really bringing the science to bear.

What would you say are some of the biggest lessons other threatened areas could learn from Monterey Bay's success?

You know, I think it's very difficult to believe, but once upon a time whales were as useful as oil is today. This is where we got our oil from; it wasn't fossil fuels, it was whales. That was what lubricated and powered the world. And we weaned ourselves off it. When you really understand that, and you realize that today there are probably 80 or 90 thousand humpback whales swimming in the world's oceans, from a period where they were almost extinct, it's kind of an amazing, positive story.

I think for me the big lessons are that good science, and then bringing people together in order to find a cooperative solution, really ends up creating the genesis for conservation success. Community-based conservation works. We can see it happening here in Monterey Bay, where lots of communities have a great stake in nature, and people really understand that they need nature more than, frankly, nature needs them. That's an important lesson that we can export to other places.

I've got to ask about the format of the show. Are you nervous at all? Do you have a plan for what to do if sea life doesn't show up the way you're expecting it to?

There are things I'm nervous about, but not that. Monterey Bay is just so chock-full of life, you can put me in that bay anytime and I can talk about what I see. We were out yesterday, and right there was a whole raft of sea otters. One had a pup with her. One of our boats was in the middle of a feeding orgy of whales: six, seven whales all together. I got in the water the day before yesterday, right amongst the kelp -- it's incredible marine life. So we're going to see stuff. We're going to see humpback whales, we may see blue whales, we may see great white sharks, we're going to see otters -- I'm not worried about that.