Justin Bieber's VMA comeback: With a bravo performance (and a few tears), pop's wild child is ready for his next act

Are you ready to beliebe once more? 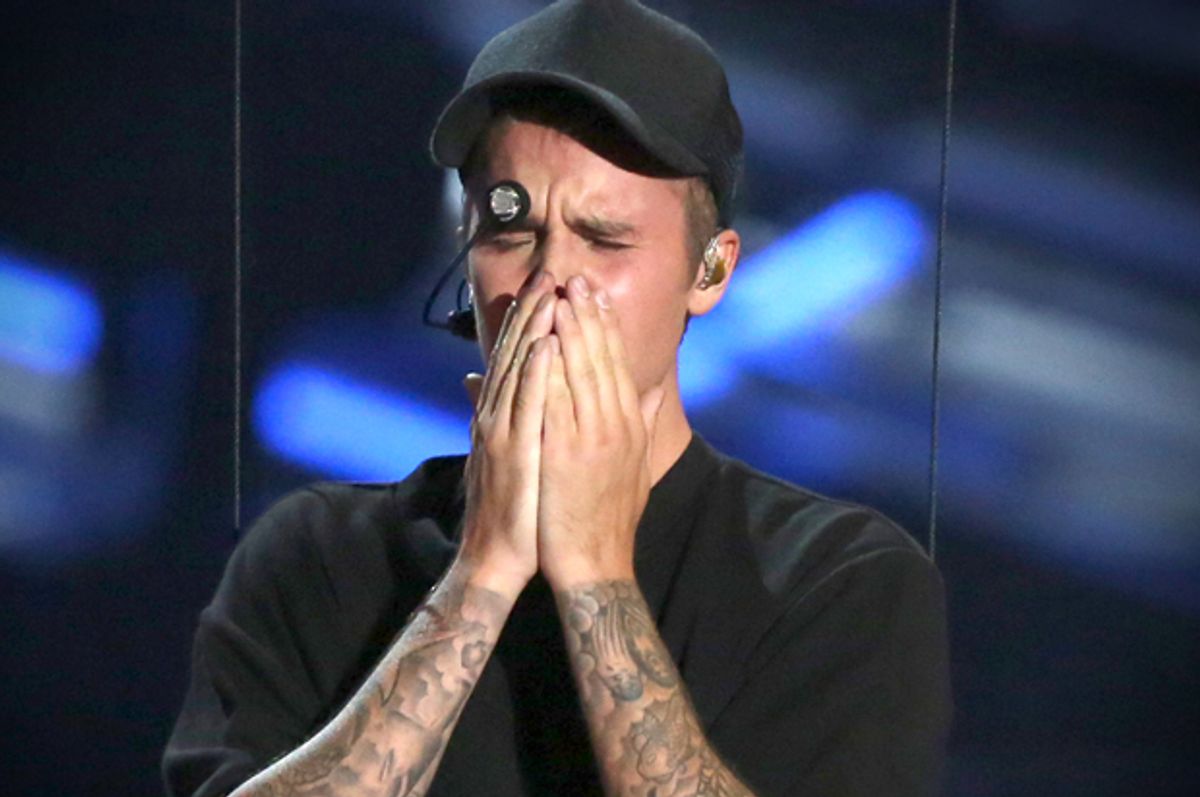 Last night, Justin Bieber broke down in tears after performing his two new hits, “What Do You Mean” and his Jack Ü collaboration “Where Are Ü Now" during his first VMA performance in five years. While we don’t know the exact reason for Bieber’s tears, there was certainly a redemptive quality to the performance: From the opening salvo touting his personal evolution ("sometimes we focus on our destination and forget to focus on that journey") to his seemingly-impromptu breakdown at the end, the whole set felt a bit like a homecoming for pop’s prodigal son after years spent wandering astray.

It certainly helps that Bieber’s new music is the real deal. Both tracks showcase the signature emotional vulnerability that spawned a nation of Beliebers, yet have been updated with a new electric sound that feels very of the moment ("Where Are Ü Now," made along with Skrillex and Diplo, particularly helps to burnish Bieber's credentials as a legitimate EDM artist, or at least someone who could become one).

But perhaps more important than the music itself is the sense that Bieber has rededicated himself to his craft, after years spent as a tabloid punchline, known less for his artistry than for terrorizing his neighborhood with reckless driving and leaving a trail of abandoned exotic pets across customs desks in airports the world over. (Where are you now, OG Mally the monkey?)

Biebs has been working hard to rehabilitate his trainwreck image lately, from his emotional apology to fans on "Ellen" to letting his fellow stars lampoon him in a Comedy Central roast. The VMA performance, too, was touted as part of Bieber’s comeback tour — MTV had been heavily promoting Bieber’s return, and the song began with a pre-written voiceover that felt like it could have been torn from Bieber’s diary:

But it wasn't until Bieber sang his final note and then, after being elevated into the air, was lowered down to earth fighting back tears (so symbolic!), that I felt the Belieber within me stir from its long slumber. While it’s hard to know which VMA moments are scripted or spontaneous, there was something humbling about seeing a star known for his arrogance showing genuine humility onstage. As New York Magazine pop critic Lindsay Zoladz wrote: "Somehow, this was more affecting than if he’d stuck the landing — how many hundreds and hundreds of thoroughly competent awards-show performances have slipped from our collective memories? I’ve forgotten so many of them, but I’ll remember Justin Bieber crying — this kid that we built up and then gleefully tore down, seeming at once spent from all the pressure we’ve put on his big comeback and genuinely relieved that the moment was now over."

Because the fact is, while we tearing people down, we also love a good comeback story. And, almost as much as we enjoy public flameouts, we appreciate when celebrities break from the script and show us something authentic — whether that’s an unscripted show of animosity or a raw show of vulnerability. It’s pretty embarrassing to break down in public, and seeing Bieber go through what felt like a genuinely cathartic moment on stage reduces our need to shame him -- as we all took so much joy in doing during the Comedy Central roast -- and opens up the possibility for a new chapter.

Of course, to some people, Bieber will always suck. Crying or no crying, EDM cred or no, he'll probably always be a lame teen idol to the haters. And a slice of his former tween fans were probably always ready to bring him along with them into adulthood, or at least older teen-hood (the VMA audience that welcomed him back with orgiastic screams probably represents a good chunk of this demo). But he could win over the middle, and that middle could sustain him, at least for the next phase of his career.

Although a new attitude might not be enough on its own, the fact that it comes with a newly-matured direction and sound (not to mention a new lewk!) suggests all the components of a viable reinvention narrative. Whether or not Bieber will, like that other Justin before him, be able to transcend his teenybopper origins and become a bonafide musical success story remains to be seen, but I for one am ready to beliebe in a second chance.