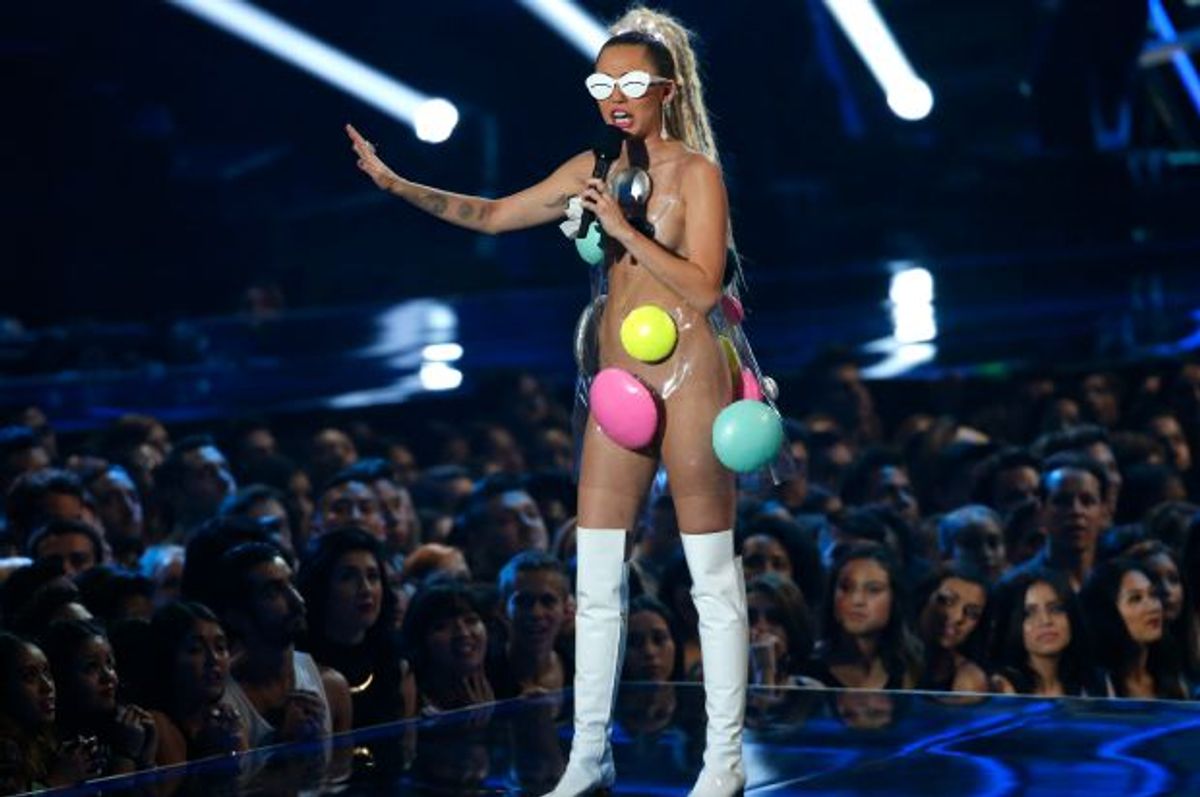 Nothing at the VMAs happens without a careful reckoning of how the act will make money. It’s one of the reasons that this awards show is even more nauseating than most; it’s a stilted, bloated commercial for an industry that needs no more advertising, an industry that already is little more than a long-winded marketing ploy. For Miley Cyrus, the VMAs were her record-release party; the charmingly titled “Miley Cyrus And Her Dead Petz” launched online, free, as soon as the show ended. (The servers for mileycyrusandherdeadpetz.com immediately crashed, though they are also available on SoundCloud.) The album art—a video version of which was on screens during her performance—is Cyrus’ face, mouth open, smearing what looks like dirty sprinkles onto her cheek. Stains from that same substance are smeared over the rest of her mouth and inside it, too. In the video, it looks more like a dark glittery syrup.

Maybe there’s an artistic vision behind Miley Cyrus’ vomited-rainbow aesthetic—who knows? But her attitude onstage, for the seemingly interminable three-hour live broadcast, was one of not vision but stunting; look what I can do and still make money, is what it read, as she cracked jokes about eating pot brownies that her “mammy” made her. Miley Cyrus is in some ways the quintessential rock god, because she is only interested in one thing: making a scene.

But the eyes, in particular, cropped up again and again. She wore them as breast-coverings twice—once in one of her wardrobe changes while hosting, and then for the final number of the night, where she herself performed a song or two from her new album. Her backup dancers—drag queens made famous on “RuPaul’s Drag Race”—were all wearing interpretations of cartoonish faces themselves. Eye-gloves. Eye-crotches. Mouth-asses.

The VMAs were even more awful this year than usual, and it was because Miley Cyrus was in charge. As a host, Cyrus had a little bit of fun with the opening monologue, making fun of her own reputation and doing a quick-and-dirty outline of what to expect from the evening. She grew up in front of a camera, and is comfortable enough being outré to sail through any briefly awkward moment—whether that’s Justin Bieber unexpectedly breaking down in tears right after his performance, or Nicki Minaj dragging her for filth from across the room.

The problem is that outré is all Cyrus has in her repertoire; frankly, the problem isn’t that Miley Cyrus is incompetent, but that’s she’s just not that interesting. Oh sure, it’s splashy, it’s loud, it’s eye-catching. But it’s nothing more than id, strategically unleashed. Her sexuality was almost mechanical, more manic than erotic—more like the nudity of a child than an adult woman. She made eyes at the camera, got high, grabbed at her crotch, and let Wayne Coyne shoot a cannon from between her legs, but none of it felt tangibly real. Miley Cyrus is a party girl made from Teflon, who offers the ideal of fucking, drinking, getting high, and going out without consequence. It’s fueled more by fixation than desire, though; if there is a desire, it is just to be profligate.

The aesthetic of her current phase—as demarcated by her current album, anyway—is even more childish fantasy run amok. The first lines of the song she opened with, “Dooo It!” are “Yeah I smoke pot / yeah I love peace / but I don’t give a fuck / I ain’t no hippie.” They are the semi-musical embodiment of any college kid who discovers they can now engage in squalor without consequences; if her words are any indication, Cyrus is about a year away from her irritating college Libertarian phase.

And it was exactly that level of broken social dynamics and dismissive insensitivity to anything that might be happening in not-Hollywood that soured the evening. Miley Cyrus doesn’t even know how to pay lip service to the rest of the world. Instead the entire show was her wardrobe, her manic eroticism, her painfully ugly dreadlocks, and her complete inability to connect, either with the audience or her colleagues onstage. She and Taylor Swift did not share sweet nothings; she and Kanye did not exchange words. Miley Cyrus only had conversations in pre-recorded sets. She did try to flirt with a sobbing Justin Bieber, and when he didn’t respond, she threw off her coat anyway, to reveal the high-cut shiny leotard underneath. It was embarrassingly poor form, but it was one moment of many. There were multiple missed cues, off-key opening bars, awkwardly staged live performances, the incredible insensitivity of Rebel Wilson, and a wild nipple—Cyrus’, of course, who was juggling a costume change and a lead-out to commercial break at the same time.

And then there was Nicki Minaj. It was a night of doppelgangers; Minaj opposite Cyrus and Taylor Swift opposite Kanye West. Both of the latter were on their best behavior, so while the tension between the two was awkward, they appear to have parted on okay terms. Minaj and Cyrus, if the conversation was not staged, exchanged some harsher words.

In the film “Exit Through The Gift Shop,” an amateur filmmaker who starts trying to make a documentary about the infamous and secretive street artist Banksy eventually becomes the subject of Banksy’s own lens. The filmmaker, Thierry Guetta, is quickly sidetracked on the topic of documentary—or indeed, of even mere observation. Instead he becomes taken with and then manically obsessed with becoming a “street artist” himself, going by the name of Mr. Brainwash. Banksy watches with mild amusement as Thierry turns into not an artist but a hack—a sycophant with some notion of the characteristics of art but none of the clarity of vision, inspiration, or dedication required to actually make anything worthwhile. It is funny, but also a little horrifying; Guetta’s work is, at least briefly, a huge success.

Minaj is the Banksy to Cyrus’ Guetta, the true artist a bit nonplussed by all the noise. Indeed, Minaj made childlike pastels and uber-girly proportions the aesthetic of her first album, “Pink Friday,” before neatly putting them aside for “The Pinkprint.” (Julianne Escobedo Shepherd wrote a fantastic breakdown of Minaj’s aesthetic storytelling at the Hairpin in 2014.) It seems highly likely that whatever Minaj is working through and discarding right now is what Miley Cyrus will be on in five years; after all, it took Cyrus this long to make the Barbie-on-acid thing come through.

Minaj was mostly present because she was performing; presumably she scheduled her opening-act performance so that she could disappear from the scene as soon as she was able. But she won in the one category she was nominated for, and her speech onstage was a sardonic mix of sweet and sour. She put on a voice, pretending to be a church-going girl thanking her pastor; she didn’t even look right at her performance companion Taylor Swift, who was standing hoping to be noticed as the other woman took the stage. Instead Minaj was thoroughly the hell over it—a sentiment also expressed by Video Vanguard (whatever the hell that means) award-winner Kanye West and the numerous nominated performers who didn’t even bother showing up, like Beyoncé, Kendrick Lamar, and Fetty Wap.

There’s a sense in which you could tell Nicki didn’t necessarily care about the shit Miley said in the paper (a publication no less storied than the New York Times). There’s a type she can play, and that type is the hood girl with a lot of attitude; it’s just as available to her as the good-girl on the cover of her first album. It seemed that there were many things Nicki wanted to say in that moment, when she was about to kick the floor back to the host after her short acceptance speech.

So she naturally delivered a put-down so cutting that Cyrus didn’t even seem to know she’d been thrown shade: “Miley, what’s good?” Not really expecting an answer; not really caring what Miley Cyrus would say in return. But phrasing her acknowledgement of the beef in such a manner that the obvious might emerge: Nicki Minaj will always know what’s good. Miley Cyrus never will.