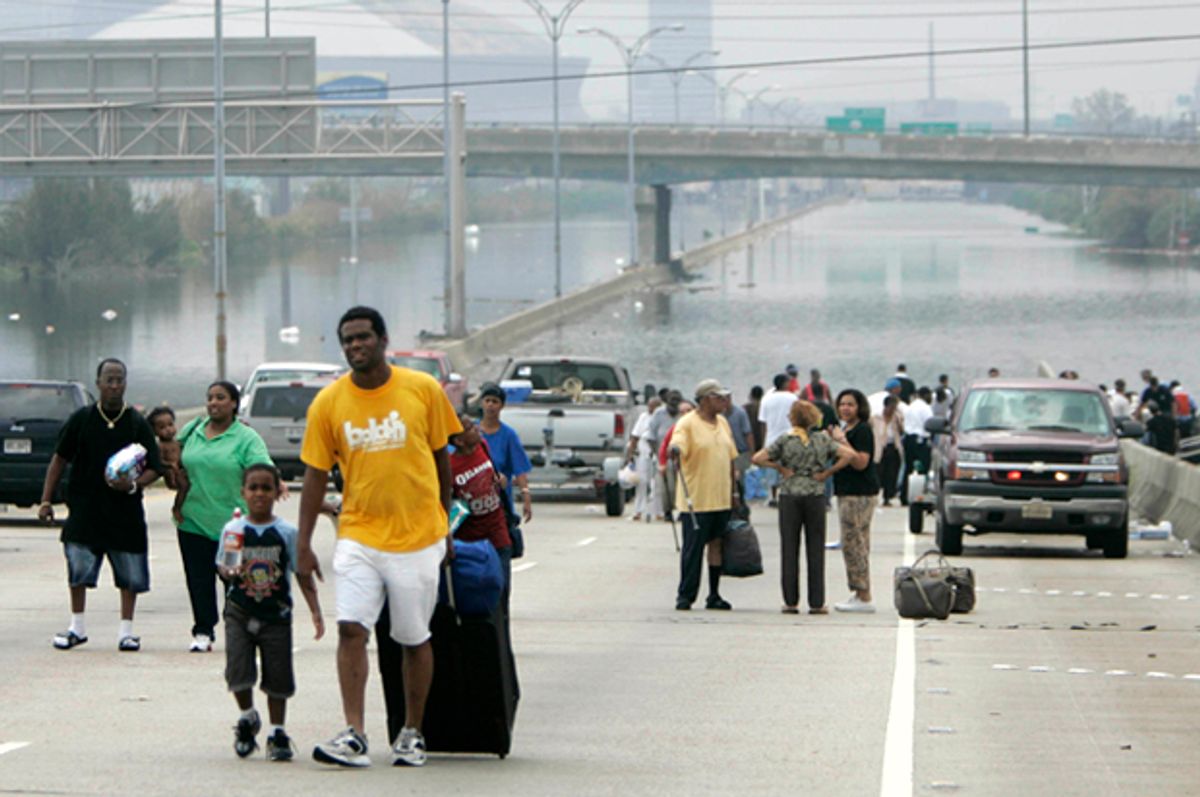 “This place is going to look like Little Somalia,” Brig. Gen. Gary Jones, commander of the Louisiana National Guard’s Joint Task Force told Army Times Friday as hundreds of armed troops under his charge prepared to launch a massive citywide security mission from a staging area outside the Louisiana Superdome. “We’re going to go out and take this city back. This will be a combat operation to get this city under control.” -- Army Times, September 2, 2005

When the levees broke in those early days after Hurricane Katrina, Americans found themselves watching a disaster unfold before their eyes for the second time in four short years. Indeed, sometimes it felt as if the entire decade had been nothing but one disaster after another. As the flood waters rose and overhead shots showed people walking waist deep through toxic floodwater and desperately waving for help from their rooftops, the scope of the crisis became clear.

Unfortunately, almost from the beginning a narrative took shape that would seriously affect the response: The police had abandoned their duties and the city was under attack from roaming gangs of African American thugs, threatening people in their homes and businesses.

There were two famous photographs of Katrina victims published in the media on Tuesday August 30, 2005. In the first, a black New Orleans resident is described as walking through water after having "looted a grocery store," while in the other, the white subjects were said to have "found" bread and water from a local grocery story. It was the beginning of a couple of days of rising hysteria, particularly on the right, about "looting" and violence.

The most famous example of this from the national punditry was perhaps a column by the Wall Street Journal's  Peggy Noonan, who wrote:

As for the tragic piggism that is taking place on the streets of New Orleans, it is not unbelievable but it is unforgivable, and I hope the looters are shot. A hurricane cannot rob a great city of its spirit, but a vicious citizenry can. A bad time with Mother Nature can leave you digging out for a long time, but a bad turn in human behavior frays and tears all the ties that truly bind human being--trust, confidence, mutual regard, belief in the essential goodness of one's fellow citizens.

There were many more long disquisitions and much hand-wringing  among right wingers about the necessity of shooting looters. Some, like Ted Frank of the American Enterprise Institute, finding summary execution to be the "compassionate" approach:

I think shooting looters is a compassionate way to protect the safety and well-being of law-abiding citizens. Time after time it has been shown that the way to prevent deadly anarchic riots is to take firm decisive action to prevent matters from getting to a tipping point.

Mostly what anyone had actually seen at that point were shots of people inside Big Box stores taking goods in the presence of police, who had made a deliberate decision to stand down since they were in the middle of one of the most devastating natural disasters in recent memory and protecting Walmart's junk didn't seem like something worth worrying about when bodies were floating down the street.

But beyond the footage of looting, there were rampant, over-the-top rumors of violence, but no pictures of it despite the fact that photographers and film crews were all over the city. Still, the idea took hold and reports of running street battles and armed gangs were everywhere. Most of the world watched in horror in those early days at the devastation and carnage being wreaked by mother nature and crumbling infrastructure. But the mainstream press breathlessly reported on a city that no one could see -- a city in a "war zone" in which average citizens were being randomly killed everywhere.

Here's a fairly typical example of the hysterical reporting from the AFP:

New Orleans was primed for all-out combat Friday, as Iraq-tested troops with shoot-to-kill orders moved into the hurricane-devasted city to quell rioters and looters.

The deployment of 300 members of the Arkansas National Guard came ahead of a tour of the affected region by President George W. Bush, who vowed "zero tolerance" for the armed gangs terrorising the flooded city.

Louisiana Governor Kathleen Blanco said the guardsmen had been authorized to open fire on "hoodlums" profiteering from the destruction wrought by Hurricane Katrina, which is believed to have left thousands dead.

"These troops are fresh back from Iraq, well trained, experienced, battle tested and under my orders to restore order in the streets," Blanco said.

"They have M-16s and they are locked and loaded.

"These troops know how to shoot and kill and they are more than willing to do so if necessary and I expect they will," she said.

Four days after the killer storm slammed into the US Gulf Coast, New Orleans was still plagued by gunbattles and rapes, with gangs of looters and carjackers roving the streets and bodies just left lying by the roadside.

Residents reported survivors dropping dead in shelters or gunned down outside the New Orleans convention center. Hospitals were evacuated after power ran out and helicopters ferrying patients and babies drew gunfire.

"This is a war zone," said Melissa Murray, 32, a Louisiana state corrections officer helping in the relief effort.

As you can see, the officials themselves were stoking the sense of panic.

Here was a typical right wing blog post during this period:

Security has become a major concern now, because the NOPD is ineffective and the looters terrorists are roaming the streets. Word is now that they’re lighting buildings on fire, but I can’t confirm that. Anyway, we have to run guard shifts and patrol and it limits our downtime.

It is a zoo out there though, make no mistake. It’s the wild kingdom. It’s Lord of the Flies. That doesn’t mean there’s murder on every street corner. But what it does mean is that the rule of law has collapsed, that there is no order, and that property rights cannot and are not being enforced. Anyone who is on the streets is in immediate danger of being robbed and killed. It’s that bad.

And then the world saw something that no one ever expected to see in the most powerful and wealthy nation on earth --tens of thousands of Americans abandoned at the New Orleans convention center with no water, no food, pleading with a local celebrity, Harry Connick Jr, to do something, anything to help them. Somehow, Connick, along (along with camera crews) had been able to fight through the wild street gangs to find out for himself what was going on. Hour after hour we watched the shocking scenes of mostly elderly men and women and mothers with young children -- the most vulnerable residents of the city who hadn't been able to evacuate -- left abandoned to fend for themselves. The sun was shining, there was no flooding near the center. Camera crews were in and they were everywhere. There were scenes of military vehicles driving by old ladies in wheelchairs as people screamed for help.

All over the country, all over the world, people couldn't believe what they were seeing.  And they asked themselves, "Where is the government, where is the Red Cross?"

We found out a few days later that the Red Cross was told not to go into the city by the authorities (which authorities is still a point of dispute) because it was unsafe, what with the roaming thugs killing and raping and all. The government needed to stop all the violence before food and water and medical help could be deployed.

The next year, the LA Times took a look back at the reporting and what they found wasn't pretty:

Journalists and officials who have reviewed the Katrina disaster blamed the inaccurate reporting in large measure on the breakdown of telephone service, which prevented dissemination of accurate reports to those most in need of the information. Race may have also played a factor.

The wild rumors filled the vacuum and seemed to gain credence with each retelling -- that an infant's body had been found in a trash can, that sharks from Lake Pontchartrain were swimming through the business district, that hundreds of bodies had been stacked in the Superdome basement.

"It doesn't take anything to start a rumor around here," Louisiana National Guard 2nd Lt. Lance Cagnolatti said at the height of the Superdome relief effort. "There's 20,000 people in here. Think when you were in high school. You whisper something in someone's ear. By the end of the day, everyone in school knows the rumor -- and the rumor isn't the same thing it was when you started it."

Follow-up reporting has discredited reports of a 7-year-old being raped and murdered at the Superdome, roving bands of armed gang members attacking the helpless, and dozens of bodies being shoved into a freezer at the Convention Center.

Fox News, a day before the major evacuation of the Superdome began, issued an "alert" as talk show host Alan Colmes reiterated reports of "robberies, rapes, carjackings, riots and murder. Violent gangs are roaming the streets at night, hidden by the cover of darkness."

The Los Angeles Times adopted a breathless tone the next day in its lead news story, reporting that National Guard troops "took positions on rooftops, scanning for snipers and armed mobs as seething crowds of refugees milled below, desperate to flee. Gunfire crackled in the distance."

"I don't think you can overstate how big of a disaster New Orleans is," said Kelly McBride, ethics group leader at the Poynter Institute, a Florida school for professional journalists. "But you can imprecisely state the nature of the disaster. ... Then you draw attention away from the real story, the magnitude of the destruction, and you kind of undermine the media's credibility."

They did more than undermine their own credibility. Their irresponsible rumor-mongering delayed the response. This fear-mongering about the city being overrun by armed thugs resulted in hours and hours of suffering in the hell of the convention center and the Superdome, not to mention all the other places where people were huddled and frightened waiting for a rescue that was being held back because of rumors the press passed on to officials and officials then looped it back to them as fact.

And there can be little doubt about what made all this so believable to the Peggy Noonans of the world:

"If the dome and Convention Center had harbored large numbers of middle class white people," [Times-Picayune Editor Jim] Amoss said, "it would not have been a fertile ground for this kind of rumor-mongering."

There is no doubt about it:

BATON ROUGE, La. -- They locked down the entrance doors Thursday at the Baton Rouge hotel where I'm staying alongside hundreds of New Orleans residents driven from their homes by Hurricane Katrina.

"Because of the riots," the hotel managers explained. Armed Gunmen from New Orleans were headed this way, they had heard.

"It's the blacks," whispered one white woman in the elevator. "We always worried this would happen."