Grover Norquist's surprising nemesis: How Donald Trump could break the anti-tax crusader's stranglehold on the GOP

Can a Republican win his party's nomination by promising higher taxes on the rich? Donald Trump's about to find out 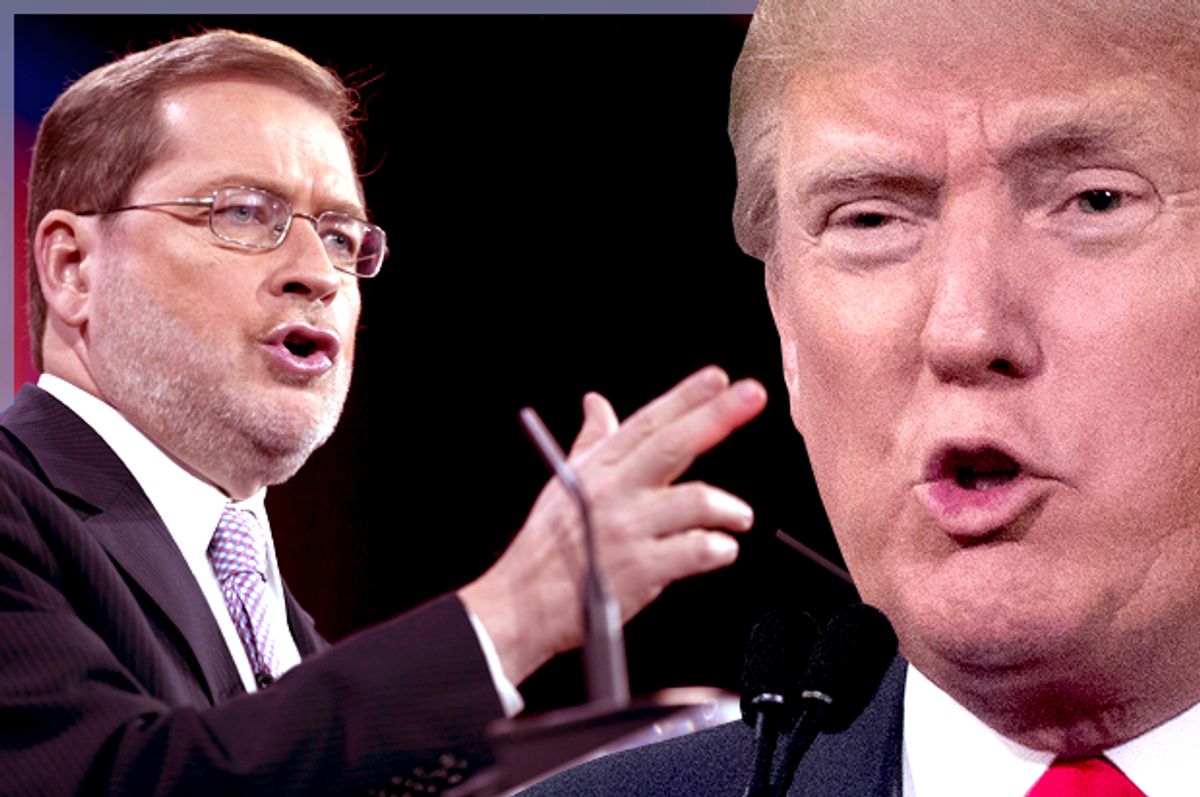 Can Donald Trump break the GOP’s strict orthodoxy on taxes, which says that no member of the party must ever, ever raise them for any reason, ever? For decades the Republican who even nods in the direction of a tax increase is all but tarred and feathered for apostasy. The party is so committed to this maximalist position that even when Democrats offer to trade modest tax increases for spending cuts, the Holy Grail of modern conservative governance, Republicans will turn them down. Who can forget the image from a 2012 GOP primary debate where, asked by Bret Baier how many of them would accept a budget deal with $10 of spending cuts for every $1 in increased taxes, not one of the eight candidates on stage raised a hand?

But that was before A Man Called Trump. And the Republican front-runner did force the Kenyan Usurper Barack Obama to finally unveil his birth certificate, so obviously any conflict might be susceptible to his magic.

On the other hand, the resistance to tax increases might be more intractable than a simple 50-year-old conspiracy to put an African-American Communist in the White House. Not raising taxes is one of the foundational pillars of the modern GOP. Even with marginal income tax rates at historic lows when Barack Obama took office in 2009, his desire to raise them on people with incomes over $250,000 per year sparked a fight with the Republican Congress so severe the United States nearly defaulted on paying its debts.

Now here comes Trump, upending the conventional Republican wisdom as he has done since declaring his candidacy in June. Or at least he seems to be, as best anyone can decipher the miasma of word-like substances he has spewed on the topic. Here is what he recently told Mark Halperin and John Heilemann during a Bloomberg TV interview: "I would take carried interest out, and I would let people making hundreds of millions of dollars-a-year pay some tax, because right now they are paying very little tax and I think it's outrageous."

What? Make the wealthy “job creators” of Republican mythology pay more taxes? Current orthodoxy says the rich already pay more than their fair share of the national tax bill while the middle- and working-class moochers with much lower incomes hardly pay any taxes at all. Wasn’t Trump paying attention to Mitt Romney’s “47%” comments in 2012?

As for taking “carried interest out,” presumably Trump is talking about closing the loophole that allows investment income to be taxed at a much lower rate than ordinary income. This change would affect hedge fund managers and millionaires who earn most of their income through investment vehicles. It would not actually be a huge boon to the nation’s coffers – about $2 billion a year over the next ten years – but it would go a long way towards the populist perception that the ultra-wealthy get breaks while the majority of taxpayers bear the burden. And since that populism is what fuels Trump’s large poll numbers, he would be well-advised to keep feeding it.

Naturally, this has the oligarchs of the Republican Party – and likely some wealthy moderate Democrats as well – more nervous than a flock of chinchillas when Trump needs a new toupee. The president of the Club for Growth told the New York Times that the mogul’s policies, which also include punishing corporations that move factories overseas to take advantage of lower tax rates and lax regulations in other countries, would “drive the economy into the ground.” Last week Trump had a very public spat with hedge-fund partner Anthony Scaramucci, a top fundraiser for Wisconsin Gov. Scott Walker. The argument was precipitated by Trump belittling hedge-fund managers as guys who “didn’t build this country. These are guys that shift paper around and they get lucky.” Scaramucci was so incensed, he accused Trump of being a plant trying to wreck the Republican primary for Hillary Clinton. The two men had to hold a face-to-face meeting to clear the air. The meeting resolved nothing; this weekend Scaramucci was attacking Trump on Twitter for being “misinformed” about the individual finances of wealth managers.

None of this refuting of the GOP orthodoxy has hurt Trump in the polls. (A new one from Monmouth on Monday showed him at 23 percent in Iowa, though he is now tied for first with neurosurgeon-turned-presidential-candidate Ben Carson.) If anything, an attack on rich New York finance industry types seems to appeal to the Republican base, which never seems to know if it despises bankers for their role in causing the Great Recession or sympathizes with them for being some of the wealthy “job creators” who supposedly make the economy go. If Trump can remove some of the mystique of hedge-fund managers and stockbrokers for primary voters, he might just let a genie out of the bottle that not even Grover Norquist and his infamous pledge can put back in.