The Bush campaign is trying to paint Trump as soft on crime, but Trump’s already the “law and order” candidate 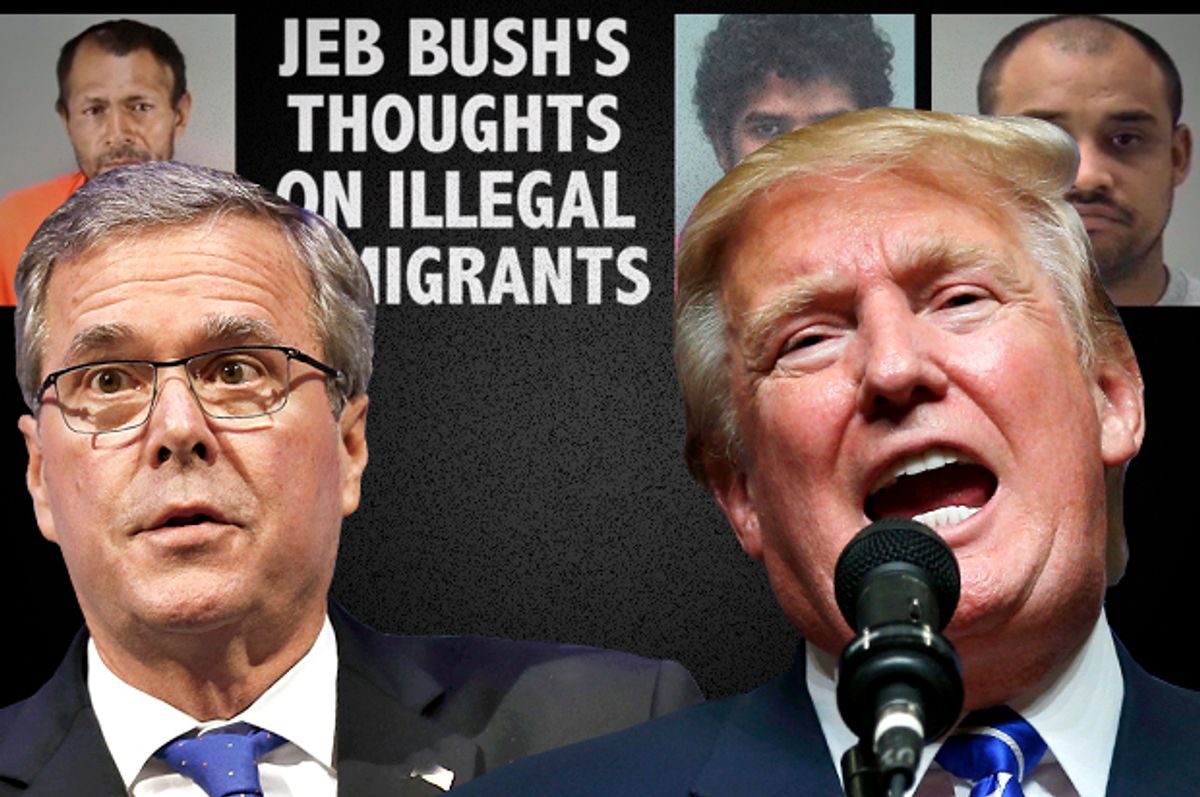 There is some sweet, sweet justice in Jeb! being Willie Hortonized by Donald Trump, disgusting as it is. Lee Atwater, who pinned Democratic nominee Michael Dukakis with Horton's crimes in an ad for Jeb's father in 1988, might not have stooped this low: Trump’s new ad, released yesterday on Instagram, flashes mug shots of undocumented immigrants accused of murder, as “low energy” Jeb muses about illegal immigration being “an act of love.” The ad closes: “Love? Forget love. It’s time to get tough!”

Jeb’s smoking gun? A photo of a copy of the New York Times, on the day Pelosi was sworn in as House Speaker, with a note from Trump to the new speaker: “Nancy – You are the greatest. Good luck! Donald.”

That’s as damaging as Jeb’s attack gets. But his campaign is so bad at this politics stuff. They don’t put the Pelosi photo, which is mildly amusing, at the top of their statement. They don’t feature a photo of Jeb in action as a serious, conservative governor, or even making an attempt to look stern. Instead he’s standing in a diner, smiling goofily, next to some white guy who looks like he swallowed a corn muffin whole. The only crime depicted here is that someone on the campaign got paid to do this.

Bush can’t win in a race to the bottom on the question of crime. Already Trump has pivoted to the issue of Black Lives Matter, which the crazy right is trying to turn into the New Black Panther Party. Bill O’Reilly is promising to put the movement “out of business,” and the folks at Fox are indicting it for the murder of Texas police deputy Darren Goforth last weekend.

Trump bashed the movement against police brutality in his Nashville speech to the Tea Party faithful last weekend, blaming it for the unrest in Baltimore in the wake of the police killing of Freddie Gray and promising “law and order.”

“That first night in Baltimore, they allowed that city to be destroyed,” he said. “They set it back 35 years in one night because the police weren’t allowed to protect people. We need law and order!” Trump said “99.9 percent” of police are good. “You’re going to have some bad apples. It’s disgusting and it’s horrible, but that’s such a tiny percentage. The problem is the good work doesn’t get shown on television.”

Of course, as Bush points to Trump’s support of legalizing drugs in one speech 25 years ago, Trump can point to his years-long crusade to give the death penalty to the Central Park Five, who were wrongly convicted of raping a white jogger in 1989. Trump still rails about the city’s payout to the five black and Latino men who spent years in jail for a crime they didn’t commit.

If Jeb wants to out-demagogue Trump on this issue, he’s going to have to channel the spirit of Lee Atwater (prior to his deathbed apologies) and race-bait the movement to end police abuse in a whole new way. Yes, he’s mocked Black Lives Matter by calling it a “slogan” and complaining (in a jab at Democratic candidate Martin O'Malley) that "[w]e're so uptight and so politically correct now that you apologize for saying all lives matter?"

But he later met with some activists who may (or may not) have been associated with Black Lives Matter, after he was heckled by protesters. In National Review, Thomas Sowell says that wasn’t a good move for his candidacy. He contrasted that with Trump throwing the “disrupter” Jorge Ramos out of his press conference last week, which he thought was the better move. Sowell then asked:

What kind of president would someone make who caves in to those who act as if what they want automatically overrides other people’s rights — as if the rules don’t apply to them?

The answer is, a bad one. Sowell fears we’re looking at a potential “race war,” given the murder of two Virginia journalists by demented gunman Vester Flanagan. The gist of his piece is that Trump is the man to handle a race war, and Bush is not.

Back when Bush said a Republican presidential candidate had to be willing “to lose the primary to win the general,” his point was widely understood: GOP candidates have had to tack too far right to please their increasingly angry, nativist base, which then alienates undecided voters in a general election. It was also widely understood to be a paradox, as in, um, you can’t win the general if you don’t get nominated in the primary process. It’s almost as if Bush didn’t get that -- like the entitled scion thought his money and family connections could allow him to defy the laws of politics. But Trump is going to make it very clear that he was wrong.