The Federal Reserve is about to make a terrible mistake 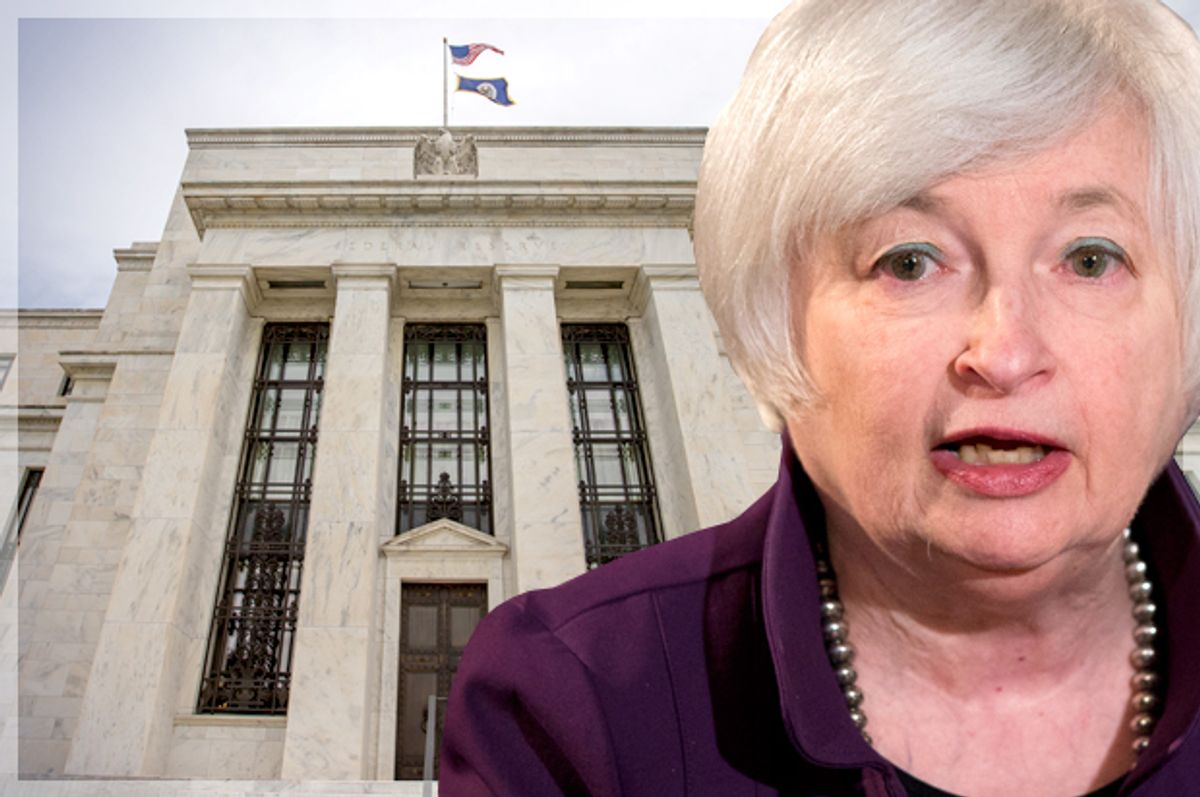 As September begins, the Federal Reserve has a decision to make. The federal funds rate set by the central bank has been at basically zero since December 2008, and leaders have long pointed to their September meeting as the time for “lift-off” -- in other words, to begin to hike rates.

Fate intervened with last week’s stock market volatility, though it should be pointed out that the market was up for the week and also isn’t the real economy. Still, investors assumed that, at a time when the global economy, particularly China, appears to be faltering, the Fed might show some patience.

But the Fed is experiencing a fallacy of schedule momentum. They want like to raise rates in September, by God, and a little stumble won’t stand in their way. Aside from stocks, however, the bigger problem is that the Fed’s rush to tighten is absent any conditions necessitating it -- and is mostly being done out of concern with being “serious,” which has created nothing but pain this millennium.

The stubbornness was on display last weekend at Jackson Hole, Wyo., site of the Fed’s annual policy conference. Fed vice chair Stan Fischer made the case that inflation will soon move upwards, a key indicator that the central bank will soon raise interest rates. The idea is that falling unemployment will create tightening in the labor market, leading to increased wages and eventually rising prices. To stop prices from running out of control, the Fed needs to slow the economy by increasing interest rates.

There are a few problems with this reasoning. First of all, who exactly thinks the economy is running too hot right now? While unemployment has dropped, wages have been stagnant for the vast majority of workers for 35 years. Somewhat faster wage growth may be on the way, but it’s not here yet, and the idea that the moment when workers get a bit more in their paychecks, the Fed has to take away the punch bowl and make their lives worse doesn’t make much sense.

Because wages have been so low for so long, it would take up to 14 years of above-trend wage growth to rebalance the economy so that workers get their proper share. Rebalancing would transfer money to those who would spend it and have a significant economic impact.

Translation: We shouldn’t fear faster wage growth, we should embrace it.

We do know that the economy remains depressed for the non-white community. Unemployment is 5.3 percent overall but over 9 percent for African-Americans. A group of liberal activists under the aegis Fed Up stormed Jackson Hole last week, arguing that the economy should be given time to grow, and made inclusive enough that all Americans can share in its benefits, including those at the low end of the wage spectrum. “Tightening policy would be an indication that the Fed doesn’t value black workers or black lives,” said Ady Barkan, director of Fed Up.

This brings us to higher inflation, which Fischer and several other major central bankers assure us is just around the corner. In reality, the economy has been running below the Fed’s 2 percent inflation target for over three years. And it’s been missing by wider margins as the year has progressed. That’s partially due to low oil prices, which have a powerful effect on inflation because they lower the cost of shipping goods. And we should expect oil to either stay at the current level or drop even more over the next year.

In fact, Since the economic recovery hasn’t surged under the current policy framework, there’s a case for a higher inflation target. But for too long, 2 percent has not been a target but a ceiling; even if we’ve run below it for three years, the thinking goes, we must never go above it.

It’s even worse than that, actually. As Kevin Drum noticed, Fischer said this over the weekend: “Because monetary policy influences real activity with a substantial lag, we should not wait until inflation is back to 2 percent to begin tightening.” So just the threat of getting to 2 percent is a ceiling. This attitude ensures inflation will remain well below target forever.

All this adds up to the fact that there’s no urgency to raise rates. The Fed is reaching for a reason to do so, and it’s puzzling to understand why. Some have charged that a pervasive low-rate environment could trigger a “reach for yield” by investors, and create financial bubbles. That’s a concern, but harming the economy isn’t the Fed’s only tool to ameliorate that; they could actually monitor financial institutions to ensure stability.

Others have claimed that the Fed must hike rates because what if they get caught with near-zero rates during a recession, and have no tools to spur a recovery? This is a funny idea, that the Fed must raise rates now so they can lower them later. If we had a functioning Congress willing to use fiscal policy to counteract recessions, this wouldn’t even be a question. But even still, the Fed has additional steps they could take in a downturn, and should probably confine themselves to addressing the policy of today, not hypotheticals some years down the road.

The real reason for increasing rates appears to be coming from outside groups, whether members of Congress or international colleagues, who just want the Fed to “get on with it.” There’s too much drama in thinking about the proper policy, and the central bankers should just rip off the Band-Aid and “return to normalcy.” According to this take, we’re in an “abnormal” rate environment, and central bankers are responsible, sober, normal people. Rates should be higher because rates should be higher. Current economic conditions have nothing to do with it.

That posture should worry people, even those who never think about the Federal Reserve. Even Fischer’s relatively tame comments about inflation expectations cratered stock markets on Monday. The looming Fed shift has already led to increases in interest rates for individual borrowers. Decisions to slow the economy or allow it to grow play into whether the recovery heals or exacerbates income inequality. You may not be interested in higher interest rates, but they’re certainly interested in you.

These important questions shouldn’t be driven by some elite sense of what is “normal.” If the data were allowed to dictate decision-making, there’s no way we’d be talking about a rate hike. The Fed’s biases, only talking to other very serious people and not those affected by its policies, really show here. Workers need the Fed’s help, and central bankers should listen to them.

Economics Macroeconomics The Economy The Fed The Federal Reserve