The GOP's ludicrous "Mt. Denali" freakout: What this latest "scandal" reveals about the right-wing outrage machine 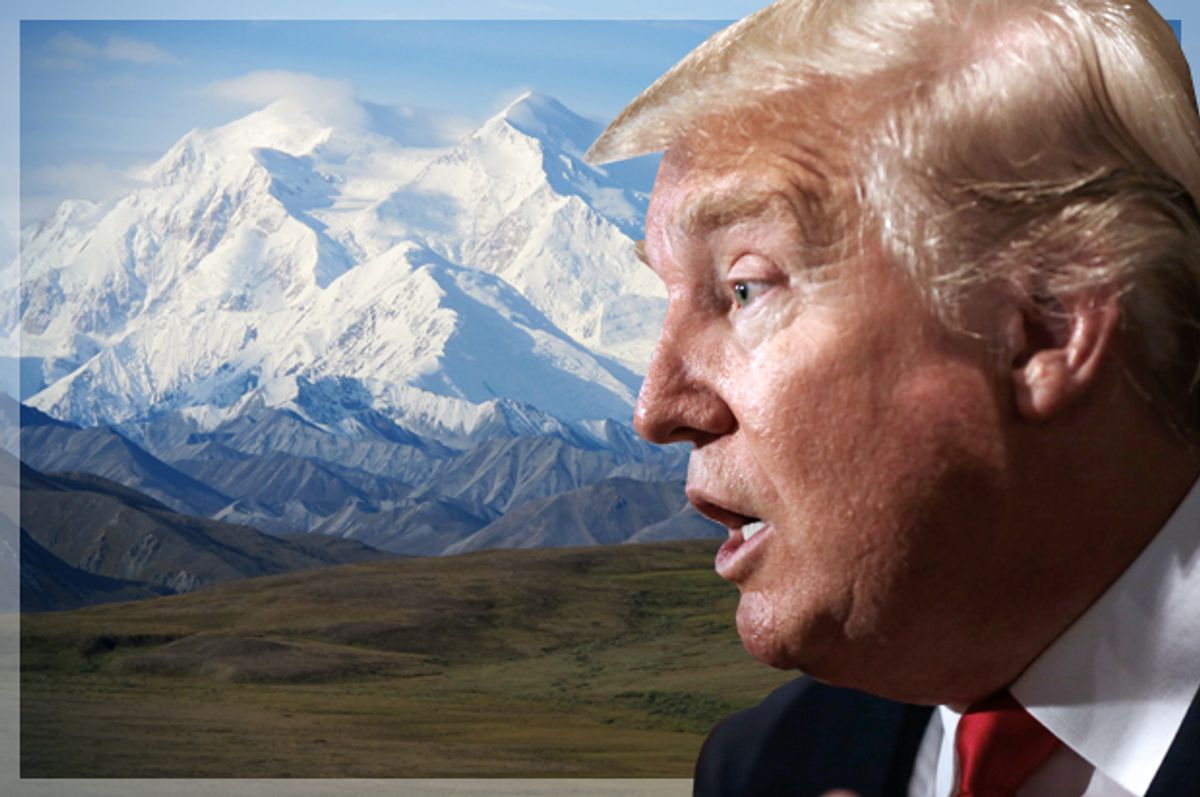 Republicans are pitching a conniption this week over an Obama administration decision that should've otherwise passed through the news cycle mostly without comment. This latest manifestation of the GOP's virulent Obama Derangement Syndrome was spurred by the official re-renaming of Alaska's Mt. McKinley, the tallest peak in the United States, and the centerpiece of one of the most majestic National Parks in the country.

The White House announced on Monday that the Department of the Interior will restore the name of the mountain back to its original designation as "Denali," the Athabascan word for "the great one." Predictably, this is a total atrocity according to both conservative Twitter and the GOP at large.

On Monday, Ohio Republicans including Speaker John Boehner defended the integrity of native Ohioan William McKinley and lashed out against the decision. Boehner, for his part, wrote in a statement:

"There is a reason President McKinley’s name has served atop the highest peak in North America for more than 100 years, and that is because it is a testament to his great legacy. McKinley served our country with distinction during the Civil War as a member of the Army. He made a difference for his constituents and his state as a member of the House of Representatives and as Governor of the great state of Ohio. And he led this nation to prosperity and victory in the Spanish-American War as the 25th President of the United States. I’m deeply disappointed in this decision."

"This political stunt is insulting to all Ohioans, and I will be working with the House Committee on Natural Resources to determine what can be done to prevent this action."

On Monday night, man of the hour Donald Trump even sounded off on the "controversy," because where there's smoke, there's a bloviating billionaire with a tenuous grasp of history.

Okay, several points on this ridiculousness -- the latest in a series of non-scandal scandals:

• McKinley was originally named Denali until 1917 when it was changed in honor of President William McKinley. If the GOP is concerned with, say, the traditional definition of marriage, shouldn't they also be interested in the traditional name of a mountain?

• The Alaska Geographic Board has actually used "Denali" as Alaska's official name for the mountain since 1975.

• Secretary of the Interior Sally Jewell noted, "President McKinley never visited, nor did he have any significant historical connection to, the mountain or to Alaska." The curator of the Ohio's William McKinley Presidential Library confirmed what Jewell said: "McKinley didn't see it, didn't travel there, didn't do anything for the people of Alaska -- it wasn't a state yet."

• Sarah Palin, of all people, referred to the mountain as Denali in her 2009 farewell address after resigning halfway through her first term as governor.

• Meanwhile, most of the Republican presidential hopefuls just spent several weeks voicing their support for changing a significant portion of the 14th Amendment. Clearly they don't fear change when it's proposed by a bewigged reality show doofus.

• Back in April, every Republican member of the U.S. Senate voted to hand over control of our national forests to the states. Our commonly-owned wilderness areas simply aren't a GOP priority.

• Similarly, the Republicans voted to cut funding to the National Park Service back in July, a move which would've delayed 70 percent of the service's construction projects and "more than a third of its repair and rehabilitation efforts," according to The New York Times.

• Here's another shocking change to Denali that could be partly blamed on Republican climate crisis deniers:

None of this is relevant to the far-right, of course, nor will there be any retractions issued given the myriad facts surrounding the name change. Knowing the long list of trivial and not-so-trivial "gates" that have each induced relapsing outrage comas among googly-eyed Obama haters, this could be one of the most trivial. It'll never top the reaction to Obama's use of teleprompters (which are used by every other public figure) or the baffling indignation over Obama’s choice of a tan suit for his press conference wardrobe, but it's way up there.

In the effort to level the odds for 2016, not to mention all previous Obama-era elections for that matter, the GOP has been engaged in a shotgun strategy, framing nearly every White House decision as those of a legion of super-villains, motivated by the president's so-called radical agenda to "fundamentally transform" America (an agenda that really doesn't exist). It works well as red meat for the base, and it's maybe successfully shaved a few points off Obama's approval numbers by sheer attrition, but outside of the conservative entertainment complex, it's easy to see exactly what the GOP is up to. It's a scam and bears little similarity to reality. And this particular Denali issue is maybe the finest example of the GOP's desperate scandal-mongering.