Kim Davis' four marriages: The ugly self-righteousness of the "saved" that fuels her marriage license refusal 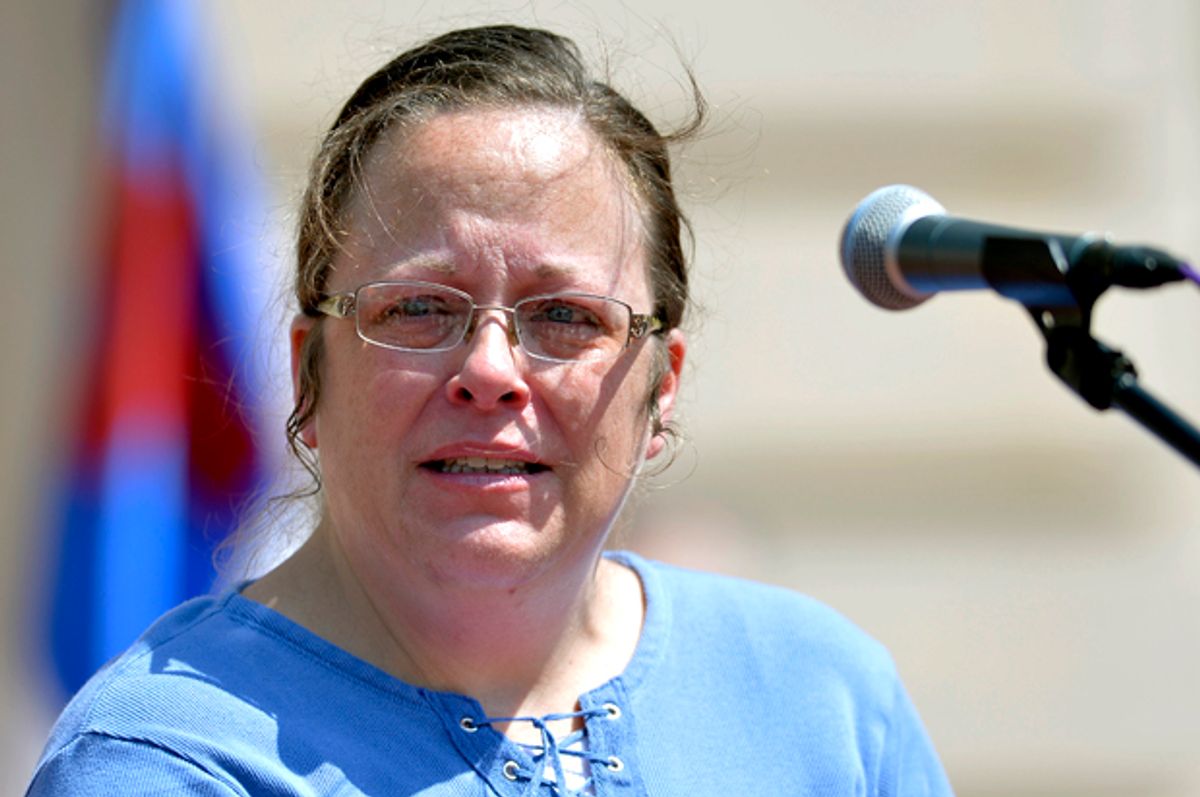 Kim Davis believes that her three divorces and four marriages are relevant only in that they give her particular insight into the matter currently at hand. She believes that having a track record that enables a US News & World Report writer to note, "She gave birth to twins five months after divorcing her first husband. They were fathered by her third husband but adopted by her second" is not what's really important here and now. And for a person of her convictions, she's correct. That's what makes her so frightening and so sad. There's no self-righteousness quite like the self-righteousness of someone who believes him- or herself saved.

Davis has become quite the lightning rod over the past few weeks, thanks to her heartfelt refusal to do her job as a clerk for Kentucky's Rowan County and issue marriage licenses to couples who wish to be wed. She's taking a stand, a stand that she and her attorneys have tried to take all the way to the Supreme Court, because she firmly and sincerely believes that America's recent constitutional acceptance of same-sex marriage is wrong. Her attorneys from the Christian group Liberty Counsel claim that her "conscience forbids her from approving a license -- because the prescribed form mandates that she authorize the proposed union and issue a license bearing her own name and imprimatur." They say that to her, same-sex marriage "is not, in fact, marriage" and to issue a license for one would "forever echo in her conscience."

And who would know better about what is, in fact, marriage than a woman who's done it four times?

Since the disclosure of her past, Davis' critics have been agog at the notion of a person with a relationship history as decidedly not biblically approved as hers now proclaiming herself a decider of what does and does not constitute legitimate matrimony. But Liberty Counsel Mat Staver says her past is precisely what gives Davis the motivation for her current actions. "She made some mistakes," Staver says. "She's regretful and sorrowful. That life she led before is not the life she lives now. She asked for and received forgiveness and grace. That's why she has such a strong conscience." He says that her history is "not relevant to the issue at hand. She was 180 degrees changed."

And in a statement, Davis explains, "I owe my life to Jesus Christ who loves me and gave His life for me. Following the death of my godly mother-in-law over four years ago, I went to church to fulfill her dying wish. There I heard a message of grace and forgiveness and surrendered my life to Jesus Christ. I am not perfect. No one is. But I am forgiven and I love my Lord and must be obedient to Him and to the Word of God. I never imagined a day like this would come, where I would be asked to violate a central teaching of Scripture and of Jesus Himself regarding marriage. To issue a marriage license which conflicts with God's definition of marriage, with my name affixed to the certificate, would violate my conscience. It is not a light issue for me. It is a heaven or hell decision."

So she never imagined she'd be in this position? When at the time of her mother-in-law's death, six U.S. states already had marriage equality? I think that Davis might either be a very poor planner or she's not being entirely honest here. I do, however, believe her "heaven or hell" imperative. I believe she is convinced that she has transgressed profoundly, and that her belief in her forgiveness is what is driving her now. Who but a person who honestly believes she's done things that would merit eternal suffering would be so very steadfast in refusing to do anything she thinks would put her back in such grave danger? Who but someone with such an apparent terror of the Lord's retribution would be so resolute about refusing to uphold the Constitution of the United States, as she promised she would?

As Dan Savage notes, "It's a pretty neat trick: If I bring up Kim Davis's four marriages, I'm being rude and mean-spirited and her first three marriages are in the past and she's saved now." But I believe it's more complicated. For Davis and her cohort, her past is both her shame and her credentials. They are evidence of her sin and her repentance, the things that grant her permission to judge others, and leave her no other choice but to do — and not do — as she chooses. She's like an ex-gay who believes himself "cured" — her own perceived sins give her a sense of authoritative horror at the actions of others.

In the constitutionally protected America that we're all supposed to be living in here, it should not matter how many times the county clerk has been married, or what her marital status was at the time she conceived her children. It should not matter because her personal life isn't supposed to have anything to do with how she performs her duties. Just like it shouldn't matter if the two people applying for a license are a man and a woman, or two men, or two women. By bringing her personal judgment into a civic job, Davis has invited commentary on her own life. And that's just pointless and sad, for everyone, because it's a commentary she now spins as evidence not of her hypocrisy, but of her redemption.