White Nationalists for Trump: The disturbing truth about The Donald's base 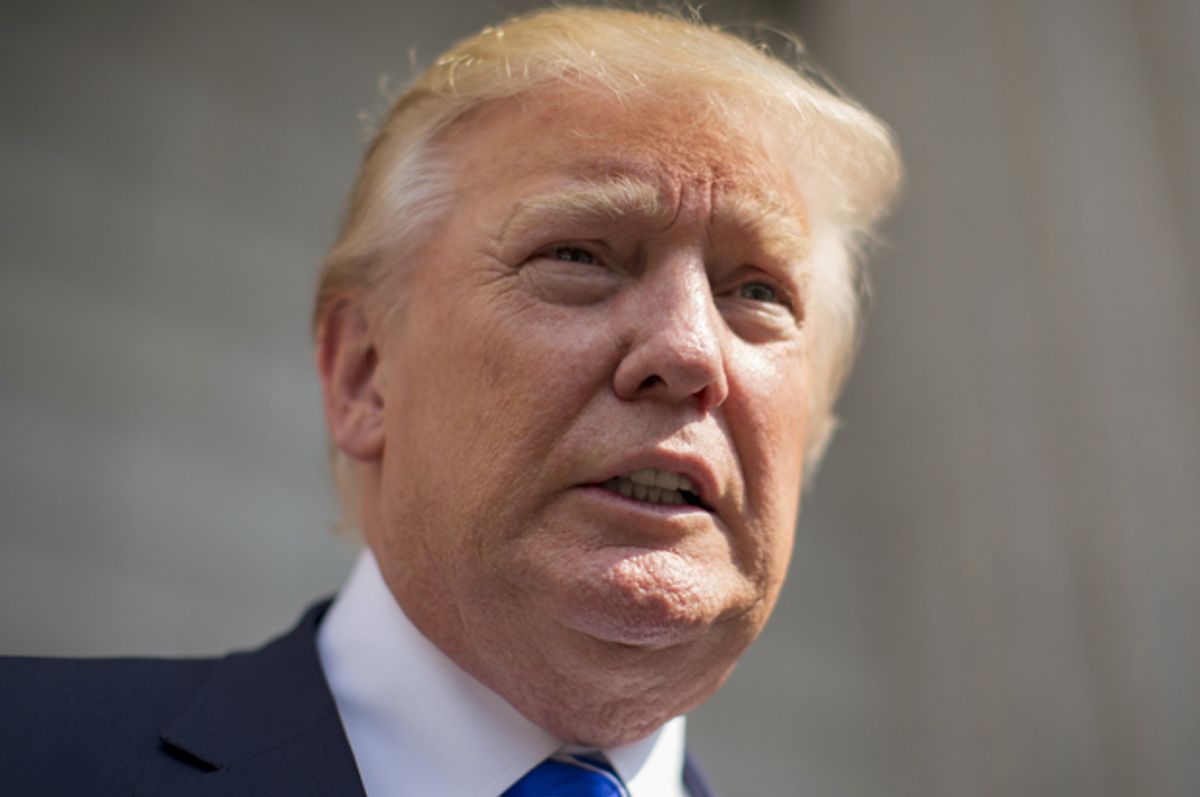 Donald Trump is achieving two feats simultaneously that, based on conventional wisdom, should be impossible. His poll numbers are skyrocketing while his support among Hispanics - a group that makes up 6-8% of the GOP voting base - has bottomed out to unprecedented lows. Roughly 65% of Hispanics have an unfavorable view of Trump, a staggering 40 points higher than the second to least popular,Ted Cruz at 24%. While Hispanics are not historically a sizable bloc of GOP voters, this radically inverse correlation speaks to a broader, troubling trend that begs for explanation. The excess, previously untapped surge, as it turns out, appears to be coming largely from white nationalist and xenophobic elements.

Despite the dozens of trend pieces over the past few years about shifting voting demographics, the harsh reality remains that the United States is still an exceedingly white place. And those white people, especially white men, still wield the overwhelming amount of power. White men comprise 31% of the population but make up 60% of the gun owners. White men make up 31% of the population but 65% of elected officials. There are 155 million voting age non-Hispanic whites in America. There were a total of 129 million votes cast in 2012, including 65 million for Obama.  Put simply: there’s not only a lot of white voters in this country, there’s a lot of untapped white voters and they make up more than enough of the population to secure their own majority voting bloc for decades to come. By selling out the 6-8% of Hispanic voters entirely, Trump has picked up a comparable (and likely much more) number of fringe whites.

A political fact made all the more clear when one considers whites also make up a disproportionate amount of power and wealth -- there not just large in numbers but large in influence. As University of California San Diego political scientist Marisa Abrajano noted last year in her study of white voting patterns:

Given that whites still make up about three-quarters of the voters in the nation and will likely be the clear majority for decades to come, there is every reason to believe that whites will have a real say in who governs. Indeed the white population’s growing allegiance to the Republican Party points to a very different short term future — one that might more likely be highlighted by Republican victory than by Democratic dominance.

The grim reality is the GOP doesn’t need minority votes to win. Trump knows it. The Republican party knows it. And the media knows it but is too busy feigning outrage - and holding to the myth of “courting Hispanics” - to point out this political reality. Indeed, the GOP doesn’t need a “big tent”, it just needs abigger tent - preferably one armed to the teeth with racists and subsidized by billionaires.

More and more, this dynamic is on display among Trump’s white nationalists supporters, who, over the past couple of weeks have been coming out of the closet -- showing up at rallies and lending their passionate support. Alone, these incidents could be written-off as nut-picking, but when added up - and coupled with Trumps inability to speak out against these excesses (if not sometimes embracing them) - it's a serious trend that should frightened anyone concerned for the future of our already teetering republic.

Here are ten of recent highlights:

1. “[Trump’s critics are] living on the pieces of silver that they get from their Jewish paymasters so that they can preside over our extermination, our disposition, and our ultimate disappearance from the face of the earth.”

2. “Hopefully, he’s going to sit there and say, ‘When I become elected president, what we’re going to do is we’re going to make the border a vacation spot, it’s going to cost you $25 for a permit, and then you get $50 for every confirmed kill [of an undocumented worker]. That’d be one nice thing.”

3. “He’s refreshing...Trump, on a gut level, kind of senses that this is about demographics, ultimately. We’re moving into a new America.”

4. “Certainly [Trump is] the best of the lot… I praise the fact that he’s come out on the immigration issue. I’m beginning to get the idea that he’s a good salesman. That he’s an entrepreneur, and he has a good sense of what people want to hear, what they want to but understands the real sentiment of America.”

5. “Donald Trump was right, all these illegals need to be deported,”

6. “There is no more California. It’s now international, lawless territory. Everything is up for grabs. Illegal aliens are murdering people there. People are being raped. Trump isn’t lying about anything — the rest of the country just hasn’t found out yet.”

8. “We are all Donald Trump now...Trump is important because he represents the first figure with the financial, cultural, and economic resources to openly defy elite consensus.”

9. “If Mr. Trump loses, this could be the last chance whites have to vote for a president who could actually do something useful for them and for their country.”

10. “Americans of ALL races are FED UP with this ILLEGAL ALIEN INVASION — so [Trump] says that he’ll BUILD a WALL to keep them out! CHEERS! He states that “Political Correctness” is disgusting and it’s time to STOP IT! More CHEERS! He DARES to turn his guns on the paid morons of the system controlled MEDIA! And regular folks LOVE it.”

In Evan Osnos’ excellent New Yorker piece last week detailing Trump’s emerging support among white nationalists, he found many of his rallies were also populated by supporters casually selling white supremacist merchandise, from books such as “The True Selma Story,” “Authentic History of the Ku Klux Klan” to stickers reading “The Federal Empire Is Killing the American Dream”. Indeed, there is little evidence of Trump ever denouncing white nationalism outright, only vaguely belittling their value to him or acting like he doesn’t know who they are. He recently told Bloomberg News, for example, that he “doesn’t need” or “want” David Duke’s endorsement but when asked if he would repudiate the former KKK Grand Wizard, he glibly said, “sure, if it makes you feel better I will.” This answer was apparently good enough for Mark Halperin who quickly moved on but should outrage any thinking person. One should jump at the chance to distance themselves from the KKK, Trump did so reluctantly and only because it made Halperin “feel better”.

It’s been said by many on the left that Trump’s policies are not that different from the mainstream GOP and that all he’s done is drop the dog whistle code language. This sentiment, while partially true, is looking more and more incomplete. White nationalists, for all their stupidity are a prickly bunch and if they’re coming out of the shadows to praise Trump it’s not just because he’s good with words. They’re doing so because his actual, concrete policy positions -- namely rounding up 11 million undocumented Americans - are, in effect, bringing ethnic cleansing into the mainstream. The media, who treat Trump's campaign more like a car accident than a real world, emerging proto-fascist threat, quietly go along, dismissing it as a "quirk" of a celebrity candidate than the actual policy of a top contender for the most powerful position in the world. In this sense, it’s Trump’s own supporters who are doing far more to discredit his campaign than the access-hungry political press who still, naively, see Trump as an amusing spectacle rather than the true threat to democracy he almost certainly is.