The 2012 runner-up is allegedly toying with a last-minute campaign to stop "the Donald." Please, Mitt, do this 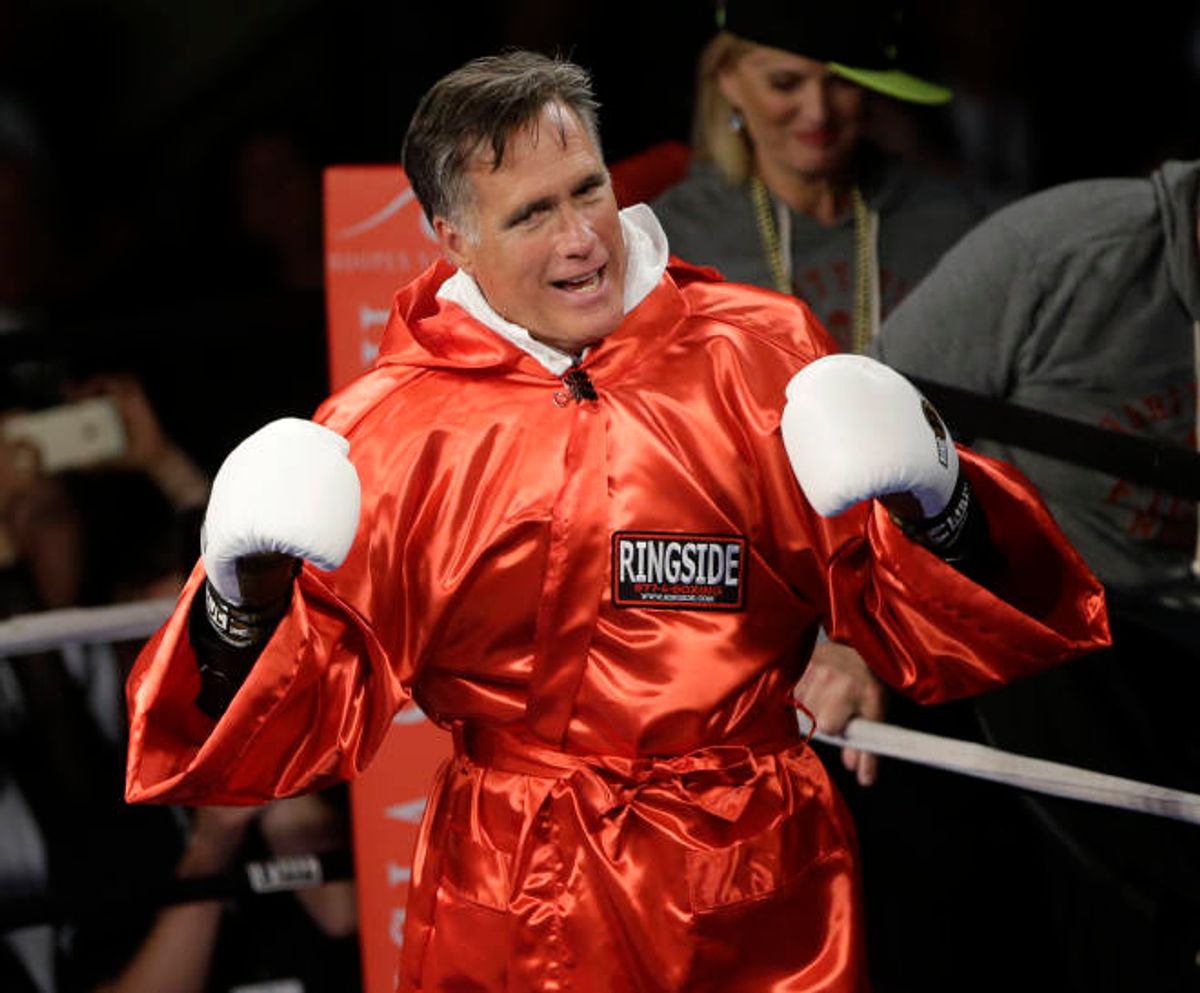 It is early September, the 2016 Iowa caucus is just about six months away, and despite the establishment’s best efforts, Donald Trump remains in the GOP primary’s catbird seat. An average of multiple national polls shows him with a nearly 15-point lead on his nearest rival, former neurosurgeon Ben Carson, while averages of polls in Iowa and New Hampshire show him up 5 and 15.6 percent, respectively. And Jeb Bush’s attack ads, which paint Trump as a crypto-liberal, have yet to make a dent.

For those in the Republican Party who care more about winning the next election than deporting millions of immigrants, it may still be too early to freak out. The hour is fast approaching, though. And if a few skittish elites are waiting for a knight in shining armor to rescue the party and slay the dragon, it’s certainly understandable. But unless they’re looking for comedic relief, pulling Mitt Romney back into the arena, which is apparently being discussed in some high-up circles, is hardly a solution.

That said, I hope Romney, who is rather obviously still not over his loss in 2012, listens to them and makes one last run at the White House. Because the potential humorousness of a Romney/Trump grudge match is, in a word, ‘uge. And watching these two former “friends” duke it out for control of the Republican Party wouldn’t only make for superior entertainment. It would allow Jeb Bush to step aside, end his joyless campaign — and finally, one hopes, get himself something to eat.

Romney makes more sense as the champion of the establishment, anyway. For one thing, he looks the part, with a Ward Cleaver haircut that is as constrained as Trump’s is manic. For another, he won’t have to answer for the previous Republican president’s sins (or at least not more than any other GOP candidate). Unlike Bush, Romney can legitimately challenge Trump when it comes to success in the private sector. And unlike the evidently “rusty” Bush, he’s already spent the last decade running for president.

Much more important, though, watching Trump attack Romney would be amusing in a way his blitzkrieg against the “low-energy” Bush isn’t. This should be self-evident to anyone who’s witnessed Romney try to go off-script, but it’s all the more apparent when you read why Romney is allegedly entertaining the idea of stepping one more time into the ring. According to New York’s Gabriel Sherman, Romney’s big issue, which we can assume would inform his campaign, is that Trump is just too darn uncivil.

As Donald Trump continues to dominate the Republican presidential race, frustration and panic have become high enough to make some inside the party Establishment pine for a candidate they roundly rejected as recently as January: Mitt Romney. Romney himself has become one of Trump’s most vocal detractors inside the party. “He’s someone to whom civility means a lot. The whole Trump thing really bothers him,” a close Romney adviser told me — and some Romney-ites are only too happy to talk up the prospect of their man jumping into the race if the Establishment fails to stop Trump, whose support in Iowa and New Hampshire is currently greater than Jeb Bush's, Scott Walker's, Marco Rubio's, Chris Christie's, and John Kasich's combined.

Watching the impossibly stiff Romney wrestle with Trump’s gonzo campaign would be a welcome diversion in its own right. But if Romney attacked Trump for being a boor, specifically? Such a spectacle would be impossible to resist. Just imagine Trump and Romney sharing a debate stage. Imagine how the Donald would react if Romney tried to touch him. Imagine how Trump would respond after hearing Romney say “I’m speaking” for the seventh time in a row. I can hardly fathom how red Trump’s rage-face would get.

And when it comes to Trump’s counter-attacks on Romney, the possibilities are endless. The chances of gratuitous references to Seamus Romney would be high. And the likelihood of Trump saying something absurdly ignorant about Mormonism would be higher still. If a pro-Obama super PAC accused Romney of having blood on his hands from his time at Bain Capital, then you can be sure Trump would end up comparing him to ISIS. No line would go uncrossed. No code would be left unbroken.

The whole ordeal would be farcical and grotesque, without question. And it would make a mockery of the primary system, blurring the line between politics and professional wrestling. But that process is well underway already, and at least a Romney/Trump match-up would be a more extravagant circus. If nothing else, it would hold us over until the ultimate 2020 showdown: Donald Trump vs. Kanye West. So to Romney, I say, go for it. You’ve already boxed Evander Holyfield; Trump is the logical next step.