Debunking the myth of the "helicopter parent": The pernicious cultural biases behind a collegiate urban legend

While conventional wisdom says that overbearing parents are swarming American colleges, the facts don't match it 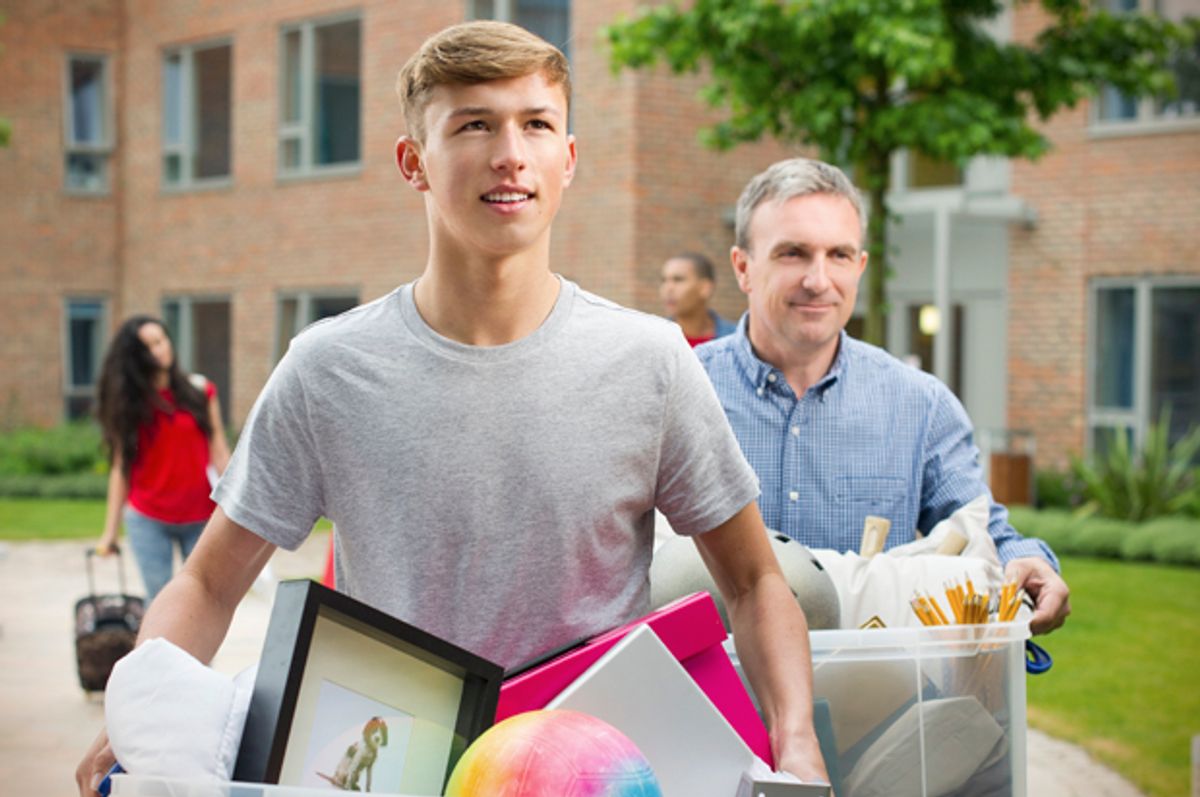 Parents who are overly involved in the lives of their college-age children are folks we love to scorn. A steady stream of articles and blog posts bristle with indignation over dads who phone the dean about a trivial problem or moms who know more than we think they should about junior’s love life. But now that a new school year is starting, it may be a good time to ask just how common such incidents really are -- and whether "helicopter parenting," when it does occur, is as damaging as we've been led to believe.

Even monographs on the subject that appear in academic journals tend to begin with sweeping generalizations drawn from popular media coverage -- coverage that, in turn, relies mostly on anecdotes. When you track down hard data, the results contrast sharply with the conventional wisdom. Yes, most parents are in touch with their college-age kids on a regular basis. But communicating isn’t the same thing as intervening on a child's behalf, and the latter seems to be fairly rare. The National Survey of Student Engagement (NSSE), which reached out to more than 9,000 students at 24 colleges and universities, found that only 13 percent of college freshmen and 8 percent of seniors said a parent had frequently intervened to help them solve problems.

As one university administrator told the Chronicle of Higher Education, “The popular image of modern parents as high-strung nuisances who torment college administrators doesn’t match reality.” In any case, the students themselves certainly don’t seem to be tormented by their parents. An overwhelming majority of the 10,000-plus University of California students contacted in a separate 2009 survey said their parents weren’t involved in their choice of courses or their major.

Alarming media reports have also claimed that parents hover once their young-adult children enter the workplace, but there's little basis for that claim either. Michigan State University researchers discovered that 77 percent of the 725 employers they surveyed “hardly ever witnessed a parent while hiring a college senior.” As for grown children outside of college and the workplace, the only study on the topic I could find, published in 2012, reported that just one in five or six parents seemed to be intensely involved in their children’s lives.

A common strategy for helicopter haters is to describe today's college-age population as anxious or depressed, then offer a couple of outrageous examples of helicopter parenting, and invite us to infer a causal link where none has actually been shown -- in fact, where none is likely to exist given that no good data support the claim that helicopter parenting is sufficiently widespread as to explain population-level mental health problems.

But what about the effects of such parenting on individual young people when it does occur? Here, too, a look at empirical findings yields surprising conclusions.

For starters, some research has actually made a case in favor of parents' being very actively connected -- and, yes, even involved – with their young-adult children. That NSSE survey, for example, didn’t find a lot of helicopter parenting going on, but where it was taking place, such students actually reported “higher levels of [academic] engagement and more frequent use of deep learning activities.” Jillian Kinzie, a researcher involved with that project, confessed that when she saw those results, her first reaction was, “This can’t be right. We have to go back and look at this again.” But the benefits did indeed prove impressive. As the survey’s director, George Kuh, told a reporter, "Compared with their counterparts, children of helicopter parents were more satisfied with every aspect of their college experience, gained more in such areas as writing and critical thinking, and were more likely to talk with faculty and peers about substantive topics.”

Meanwhile, in the 2012 study of grown children, "frequent parental involvement, including a wide range of support, was associated with better well-being for young adults.” Support (not limited to money) from one’s parents may be helpful, if not critical, when students graduate with uncertain employment prospects and, perhaps, a crushing load of debt.

A fair-minded appraisal of the subject suggests that denunciations of helicopter parenting are based less on evidence than on a disparaging attitude about young people -- witness a Time cover depicting a young man sitting in a sandbox ("They Just Won't Grow Up") -- or on the value judgment that kids ought to become independent as soon as possible. That judgment may seem like common sense, but maturity isn't the same as self-sufficiency. Most developmental psychologists have concluded that the quality of parent-child relationships continues to matter even past childhood. Good parenting is less about pushing one's offspring to be independent at a certain age than being responsive to what a particular child needs. (What is worrisome is when parents need their child to need them.)

What's more, independence is closely connected to an individualistic worldview that is far from universal. Some cultures are more likely to emphasize the value of interdependence. And the cultural bias that seems to fuel condemnations of helicopter parenting has a very real impact on students’ well-being. A series of studies published in 2012 by a multi-university research team revealed that "predominantly middle-class cultural norms of independence" are particularly ill-suited for young adults who are the first in their families to attend college. Those expectations create a hidden academic disadvantage for working-class students and students of color, with adverse effects on their academic performance and well-being.

Given the expectations of self-sufficiency that permeate elite colleges in particular, connections with, support from, and maybe even interventions by parents become that much more important to help students succeed. Denunciations of helicopter parenting are particularly unfortunate, in other words, when no attention is paid to differences among students and their backgrounds.

But doesn't research show that helicopter parenting can be psychologically damaging at least to some young people? A handful of small studies have, it is true, shown that extreme versions of helicopter parenting sometimes go hand-in-hand with anxiety or a diminished sense of well-being. In each of these studies, however, questionnaires were given to students only at a single college, and the strength of the results weren't particularly impressive. In one, Tennessee researchers found that having a helicopter parent explained less than 9 percent of the variation in students' well-being. That study attracted attention in the popular press; the unimpressive effect size, however, is never mentioned.

Look closer, in fact, and you'll find two caveats to all of this research that are even more damning. First, the findings offer no support for the conclusion that helicopter parenting caused the problems with which it was associated. One set of researchers admitted that “when parents perceive their child as depressed, they may be more likely to ‘hover.’” Those in another study acknowledged that unhappy students "may view their parents as more intrusive.” Here, in other words, we have two alternative, perfectly plausible explanations for the (weak) correlation. One: if the parents are hovering, it's because the kids already have issues. Two: students who are struggling may be more likely than their peers to interpret whatever their parents are doing as excessive involvement. (Remember: the helicopter parenting label is attached solely on the basis of the students' questionnaire responses.) Either way, the evidence doesn't prove that helicopter parenting makes kids unhappy -- again, a fact ignored by every article in the popular press I could find that summarized any of these studies.

The second major caveat is truly intriguing; its implications extend to the heart of what's meant by "overparenting" of children of all ages. When you read the research closely, it turns out that what's classified as over-, intrusive, or helicopter parenting might more accurately be described as excessive control of children. The items that college students are asked to check off on those surveys -- or that parents themselves check off in studies hunting for evidence of overparenting of younger kids -- are less about being indulgent and making things "too easy" for children than about parents who want (or need) to be in charge of their kids.

This offers a very different lens through which to view all those warnings that parents do too much for their children and are overly involved in their lives. If the problem is actually control rather than indulgence, we're forced to rethink the "coddled kids" narrative offered by most critics of helicopter parenting, a narrative that fits with current claims that frustration and failure are good for children, that they have things too easy and need to develop more grit and self-discipline.

To whatever extent helicopter parenting is going on, then, it might be described not as permissiveness but as virtually the opposite of that: a variation of the traditional way of raising kids for which many conservative critics of indulgence seem to be nostalgic. Maybe old-fashioned, control-based parenting was never discarded after all; some parents just switched to a slightly different, more intrusive version.

The ideal alternative, according to a growing body of research that I've written about elsewhere, isn't less parenting but better parenting. It's not standing back and letting kids struggle, then kicking them out of the nest and demanding they make it on their own whenever we (or pop-culture scolds) say so. It's being responsive to what the child needs. That may be the right to make decisions. It may also be a continued close connection to Mom and Dad.

What seems clear about HP in particular is that it's neither as pervasive nor as pernicious as is commonly assumed. Strident declarations to the contrary may tell us more about the people who make them than about the reality they presume to describe.

Alfie Kohn is the author of 14 books on education, parenting, and human behavior, including, most recently, The Myth of the Spoiled Child (Da Capo Press) -- from which this article is adapted -- and Schooling Beyond Measure (Heinemann). A version of this article appeared earlier on www.alfiekohn.org.

Alfie Kohn the author of 14 books, including "Unconditional Parenting" and "The Myth of the Spoiled Child." He lives in the Boston area and lectures widely to teachers, parents and researchers.